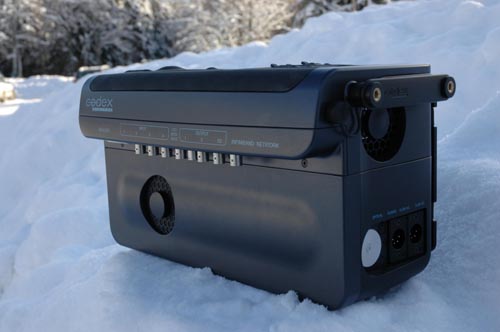 Codex Digital arrives at NAB 2009 in an upbeat mood, with its media recording products ensconced on a variety of flagship broadcast and motion picture productions, and a new product combination launching that could spell the end of tape-based acquisition.

Codex designs and manufactures hard-disk and solid-state workflow equipment. Products include, award-winning high-resolution media recorders, which capture at up to 4K uncompressed resolutions, plus a range of high-performance media management stations to manage the entire workflow of a production from set into post.

Debut of Codex Portable and Transfer Station combo
With the US debut at NAB (c/o BandPro #C10408) of the Codex Transfer Station to complement its feature-packed Portable – a combination that is shipping – the company says it is setting new standards for end-to-end workflow.
“Production and post have traditionally been separate, artificial activities, in need of a unified flow,” remarked the company’s co-founder Paul Bamborough. “We bridge that gap, making production and post seamless. New at NAB we’re showing a complete portable recording and dailies transfer system. These products allow you to record whatever you want, compressed or uncompressed, to rapidly turn that material into whatever files you want on a daily basis, and deliver more conveniently than ever to whoever needs it in production or post.”
Explaining further Bamborough said, “When you record to film or to tape, you’re faced with roadblocks rather than a workflow – processing, copying, recopying, ingesting, synching, logging. These are all time-consuming, costly steps. With Codex you get all the deliverables you want – like take-home copies, effects and editorial finishing files, complete metadata, archive copies – all on-demand, all faster than real-time, and all for free. Our Portable and Transfer Station abolish the traditional delays and intermediate steps that hamstring productivity.”

Codex in Action!
Codex systems have been used on a diversity of productions. In broadcast these include BBC kids TV series Grandpa In My Pocket , spots for Apple’s iPhone and Lincoln cars, and most recently a ‘live’ show by stand-up US comedian Dane Cook for HBO. Codex has featured on major studio pictures such as Warner Bros.’ Speed Racer and Walt Disney’s Alice In Wonderland, with Lucasfilm’s Red Tails and Disney’s TRON 2.0 in production. Low-budget independents such as the Danish production No Plans for Love, and Norsk Filmstudio’s Christmas Night In The Blue Mountains, have also used Codex. The multi-camera recording capabilities of Codex systems have been utilised on stereoscopic features including Journey To The Center of The Earth and Avatar.
“We are seeing our original vision coming true across a broad variety of big and low-budget productions. They are all enjoying huge benefits in terms of the speed, ease and cost-effectiveness of their material flowing into post,” Bamborough said.
“Our NAB message – that recording to Codex is way easier and more economical – should resonate at a time when everyone wants to hear about systems delivering genuine cost savings and making life easier into the bargain.”
Codex is headquartered in London, and has offices in North Hollywood. BandPro Film & Digital and Media Distributors are Codex’s US distributors.