A few cool new products you may have missed

This year's Cine Gear had its share of well-known vendors and their wares (Arri, Litepanels, Dolby, Kessler, SmallHD, etc.) but I like the show because it's a great opportunity to find lesser-known gear that you might not otherwise discover, or have a chance to try hands-on. Here's some of the smaller stuff that caught my eye….

PAGlink Batteries – They Link Together

These Lithium-Ion batteries have a 96 watt-hour capacity, so they’re well suited to cameras, field monitors or LED lights. A digital read-out tells you how much charge you've got either as a percentage or in terms of time, but what’s unusual about the PAGLink batteries is that you can link them together in a stack, so they behave as one big virtual battery (linking them also pushes their current draw from 10A to 12A). For instance, link two batteries and you get 188 watt-hours or three batteries gives you 282Wh. The linking saves time on battery switching (you can hot swap the last battery on a stack for continuous power), and you can charge a whole stack together, so you can leave a bunch of batteries on a charger at the end of the day, and not worry about swapping them while you're out to dinner. Flying also gets easier, since you can break a bigger “virtual” battery down into smaller components that meet FAA travel restrictions. The batteries have been available with V-mounts for a while, but Anton Bauer mounts are brand new.  List price per battery is $499, and they work with existing Anton Bauer or V-mount chargers. 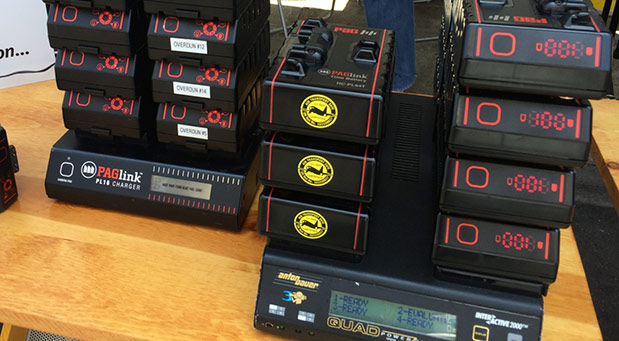 The Cherry Box — a Plastic Applebox in 10 Colors

At the Filmtools booth, I saw a new kind of applebox made of plastic. The Cherry Box comes in familiar applebox sizes (full, half, quarter and 1/8th) but is more expensive than a wooden model — for instance, a full Cherry Box is $54 at Filmtools, versus a Mathews box for $37. Also, standing on a Cherry Box will cause it to bend a bit in the middle, which can be a deal-killer for some applications.

On the other hand, the Cherry beats a conventional applebox in plenty of other respects. Let me count the ways: It’s significantly lighter than a wooden box (5.5 pounds for a full Cherry vs 9.5 pounds for a Matthews). It’s waterproof and nearly indestructible. It comes in 10 snazzy colors, including chroma blue and chroma green. Its plastic is 100% recyclable. And that bend in the middle can actually be a blessing if you're, say, a cameraman standing on the thing all day long. 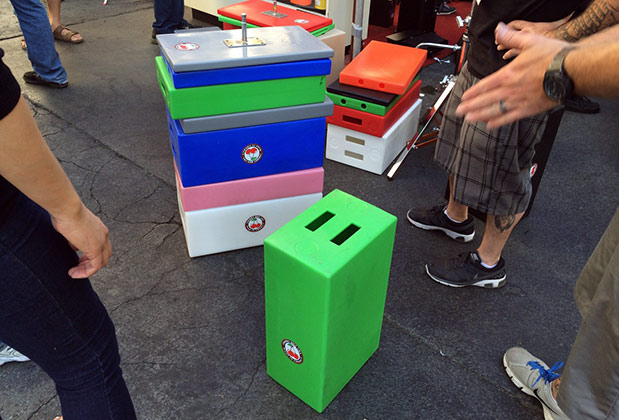 If you find yourself caught shooting in bright sunlight, take a look at the Bon BEM-072H field monitor. Thanks to a 7”, 1100 nit LCD screen, you can see the $1,750 Bon clearly in direct sunlight, no hood required. Resolution is okay — 1024×600 pixels versus the 720p panels found in monitors from the likes of SmallHD — but you get SDI and HDMI inputs, an SDI Loop-Through output, along with waveform, vectorscope, focus assist, false color, and other useful tools.

The Bon is thin, and weighs 1.8 pounds, which is a bit on the heavy side for an on-camera monitor, but still manageable. You can put a V-mount battery on the back, or get a battery bracket for smaller Canon, Sony and Panasonic batteries. With a low 15 watt power draw, the monitor can go for a while on any battery you give it.

To put things in perspective, SmallHD has its own super bright monitor — the DP7-Pro High Bright at 1500 nits with a 1280×800 display, and tons of high-end features, such as support for 3D LUTs. But the High Bright draws 25 watts of power, and costs $2,999. So if you need something simpler and more affordable, the BEM-072H is worth a look. 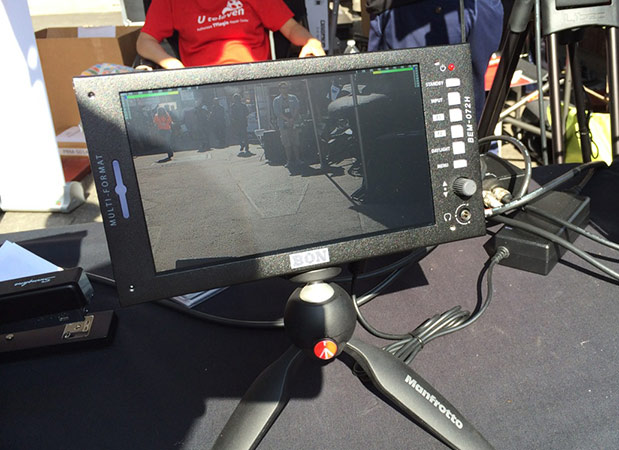 I saw a  remote lens-control systems to show, including Element Technica’s 3-Axis Control System, Hocus Product’s Axis 1 and Redrock Micro’s microRemote. But ikan had the most compelling options to my eye, starting with the PD Movie, a single channel remote follow focus that starts at only $1,599 (a high torque drive motor option boosts the price to $1,799), which is the lowest price I've seen yet for a remote system. The PD's motor was a little chubby, but it seemed to handle slow moves well (which can be a challenge for low-end systems), and besides p-tap power, the system has a built-in battery that you can recharge with a USB cable. For $2,499, a two channel model gives you iris control as well. 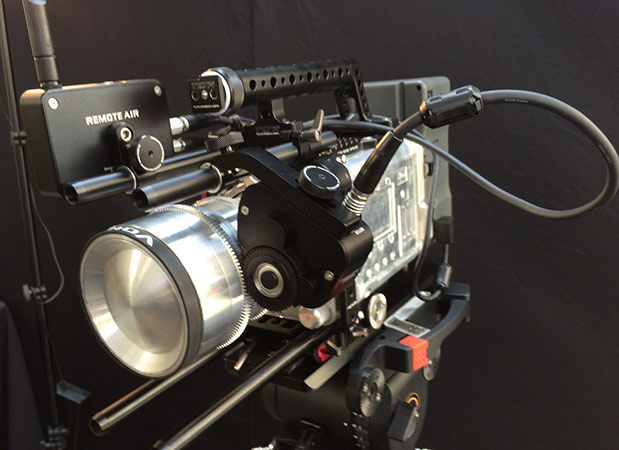 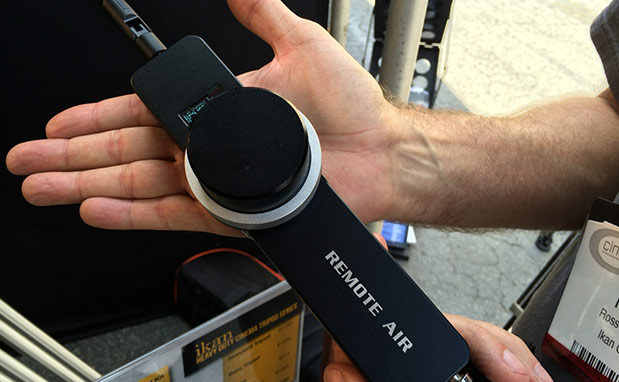 But more impressive was the higher-end TiltaMax system, which has 3 channel control for focus, iris and zoom, along with a zoom speed adjustment. Albeit at a tradeshow, the Tilta felt highly responsive on all three controls, and very precise for slow moves. It also felt great in my hand. Other bonuses include a library of preset characteristics for 500 different lenses (you can add your own as well), a lit focus ring for working at night, the ability to set markers that vibrate as you turn into them, and a big LCD screen (3.7”). ikan will be selling the Tilta starting in July for around $5,000, which is the best price by far that I've seen for a 3 channel system. 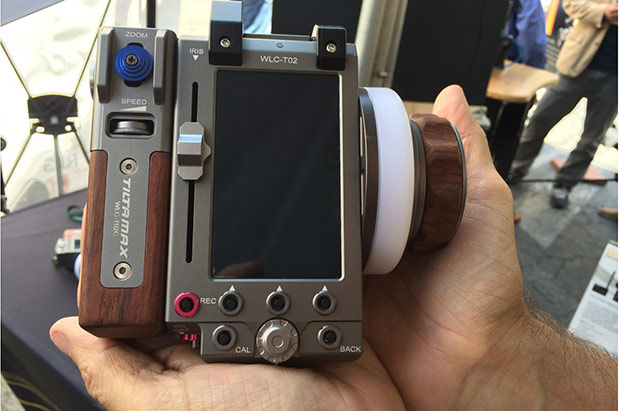 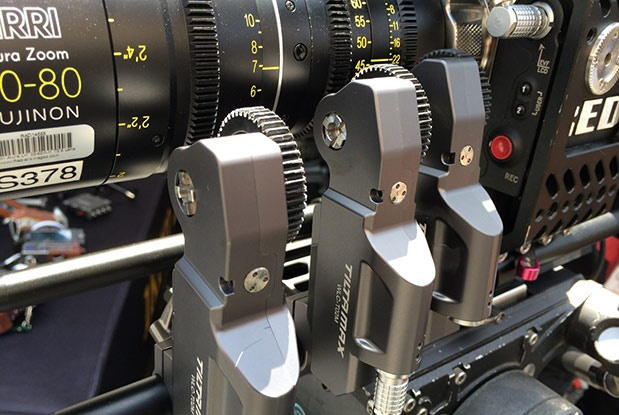 ZyLight had an update to their F8 Fresnel LED light (100w in either daylight or tungsten, $2,400), which has an 8” glass lens that you can focus from 16 to 70 degrees. That big lens makes for a good-looking, controllable beam not common of many LEDs, and there’s a speed ring for adding conventional soft boxes and other diffusion. At the same time, the F8 is remarkably compact, being only 4.5” thick when the lens is set to flood mode, and the light's housing is barely bigger than its fresnel lens. So you can pack a few of them in a small case, and of course, can put a battery on the back along with hand grips (it’s 9.5 pounds without a battery).

The F8 has been shipping since 2013, but Zylight was showing a freshly updated version at Cine Gear that prevents the lens from drifting from your desired spot/flood setting over time (something the original model occasionally did). The new F8 also increases output by around 20% and improves its fan-less cooling system. 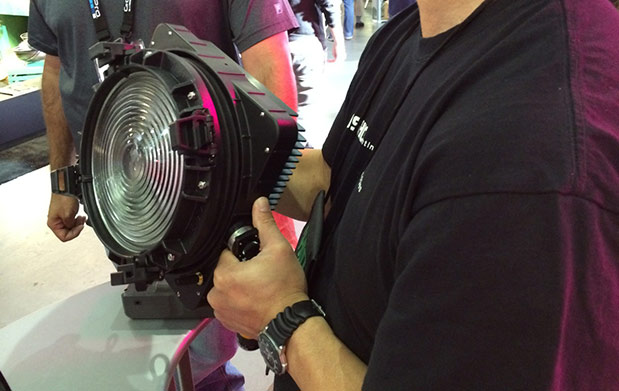 Here’s a small 90 watt LED panel that stood out thanks to a number of handy light shaping tools you can attach to it. For $2,500, you get the 4.4lb Sumo panel in either daylight, tungsten or bi-color. Also included is a 30 degree and 60 degree lens, and a separate micro lens diffusion panel that softens the light and essentially removes the shadows cast by the panel’s multiple LEDs. There's also a soft box that you can quickly snap on to the light’s aluminum housing (with cleverly designed flaps for controlling spill), a snap-able lantern and skirt, and a 28” octagon, along with grids. 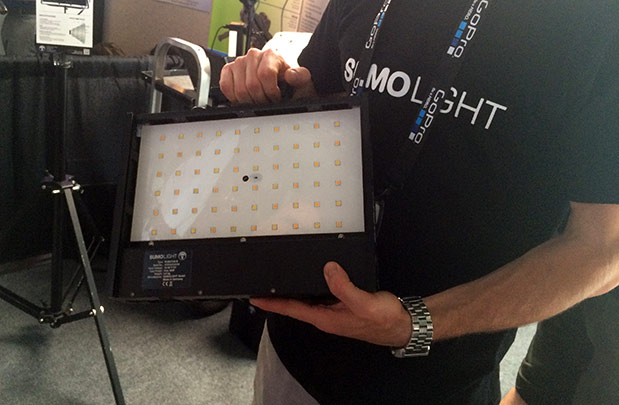 Who’s Got a Gimbal?

Just about every other vendor at Cine Gear had a 3-axis, MōVI-style gimbal in the works, and of course you have to wonder how many of those products will still be around next year, if not the year after. But competition does indeed breed innovation, and it’s clear that the category is rapidly evolving thanks to all these fresh faces. On price alone, the new crop is significantly undercutting the MōVI’s price — often in half or more. But I saw some interesting design innovations as well…

For instance, the new Defy G5 and G12 ($3,800 for 6 pound camera setups, and $8,500 for 12 pounds) incorporates a battery and p-tap into the gimbal’s crossbar, which can give hours of power to accessories like a monitor, wireless transmitter, or follow focus. It’s a nice touch, saving bulk and some weight. 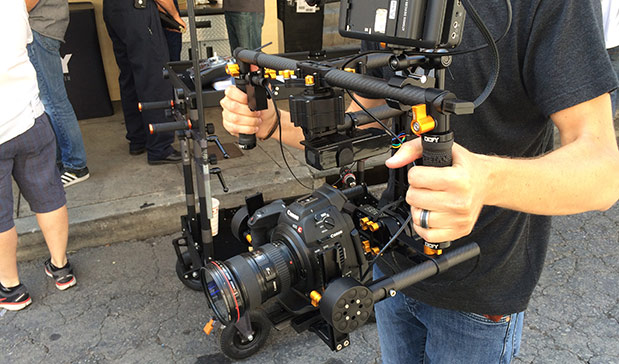 The Tyto Cinematic Camera Stabilizer has a 5lb-limit model for $2,500, and a 10 pounder for $10,000. The rig has nothing under the camera, so you can set it down securely on a flat surface, instead of perching it on a stand.

The DJI Ronin can take heavier cameras than the MōVI M10, and costs $4,495 — just about a third of what the M10 will run you. Its tool-less balancing is convenient, and the designers made a pretty amusing short film to show what it can do.

I was probably most intrigued by the Letus Helix, since its design wasn’t directly inspirited by the MōVI, which gives it a number of unique traits you don’t typically find in other gimbals. For starters, you can put the Letus Helix squarely down on a flat surface. It’s also a little lighter than your average gimbal, since you wear the battery pack on your belt. Your camera also sits more level with the Helix’s hand grips, instead of well below them like most gimbals, which means you don’t have to reach for the sky just to get the camera at eye level. You can also configure the Helix to use 1, 2, 3 or 4 axis, depending on your application (car shot, steadicam, hand-held, etc.), and can buy a model with fewer axis now, but add more later. Finally, the Letus’ unique approach to centering the camera means you can re-balance it after a lens change by adjusting just the forward/back axis, saving a lot of time (balancing, unfortunately, does require adjusting some screws). Price is $3,975 for a three axis rig that can support up to 16 pounds.

Sure, it's just a camera handle, but Wooden Camera's new NATO Handle Kit offers a fair amount of bang for the buck. It's a quick-release handle that you can easily attach to a Blackmagic, Sony or Canon C300/500 camera. It's got a solid cold-shoe mount up front, as well as a 15mm rod opening under the handle that you can use to attach a viewfinder mount, or other gear. There's also another 15mm opening coming out of the front tip of the handle for attaching something like a focus motor, and there's a 19mm opening coming out of the backside too. And there are 1/4-20 and 3/8-16 holes on the grip for mounting even more things (though they would likely make it hard to get a firm grip around the handle). It's like having a mini-rig all in your camera's handle, and at $250, is a lot less expensive that other custom handle rigs I've come across. 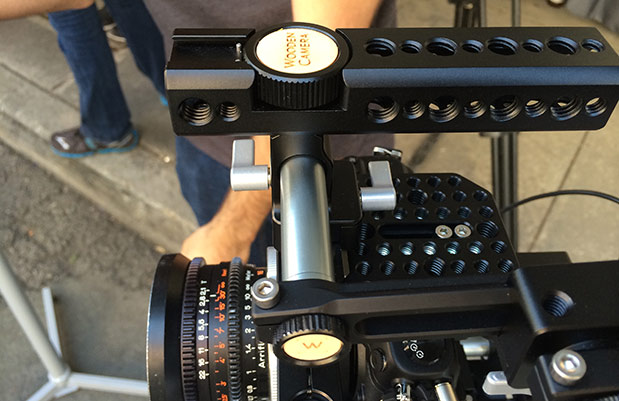