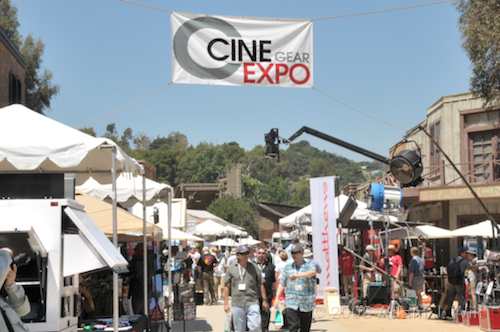 Cine Gear Expo on the Universal back lot.

We came down to LA for Cine Gear Expo, a two-day showcase of all manner of production things: grip gear, lighting, camera accessories, and so on.

It is quite literally the hottest equipment show around… 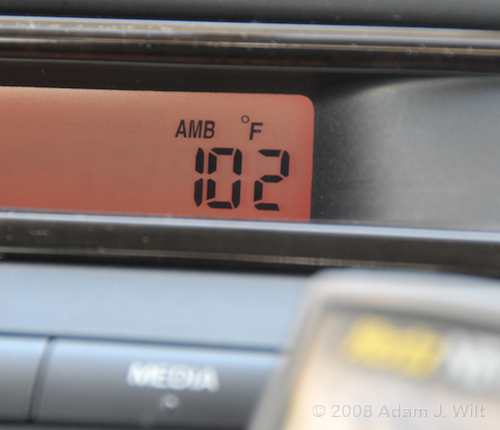 The readout in the rental car. The TV weather folks said it was 108 degrees. 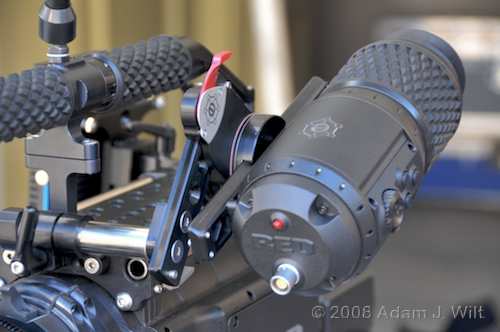 Element Technica makes a variety of add-on RED bits (such as a by-now familiar breakout panel with proper BNCs), including this very nice EVF mount. Lots more rigid than the RED arms, yet still very adjustable. 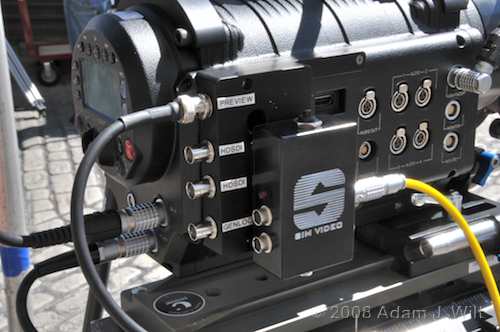 Sim Video has their own line of add-on RED bits, and they were showing a prototype breakout box, seen here behind an add-on lens controller. 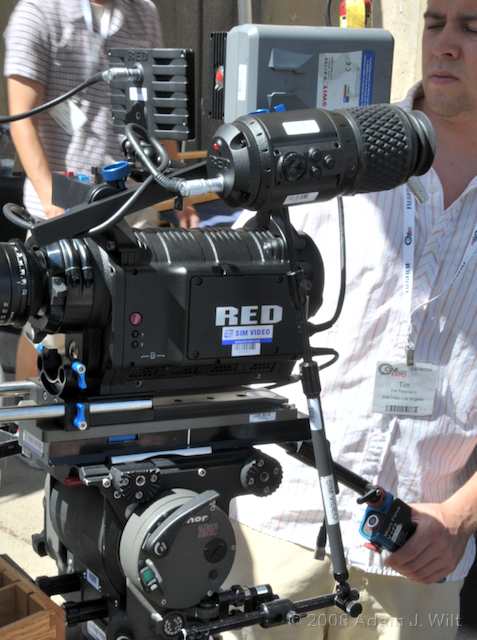 Sim’s take on EVF support includes a tripod arm to keep the EVF level as the camera tilts. 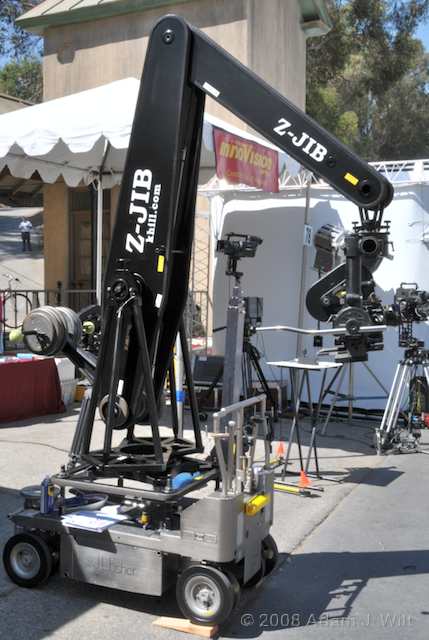 The Z-Jib looks odd, but works well, suspending the camera in free space with a surprising degree of flexibility. It’s all-mechanical, combining carbon fiber with endearingly old-school big hunks o’ metal and a chain drive. It’s a LOT smoother than it looks. 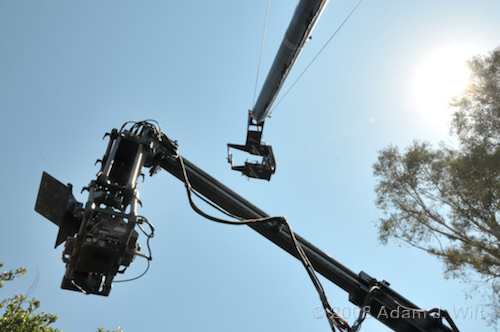 Camera cranes reach for the sky. 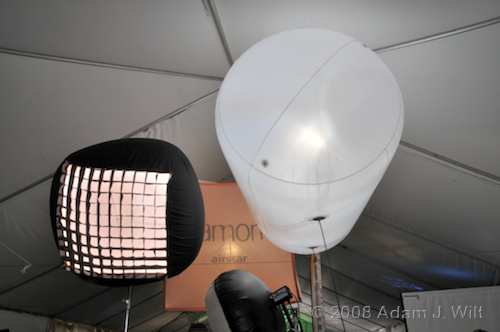 Why have bulky light stands in your shot when you can float your lights in a blimp? 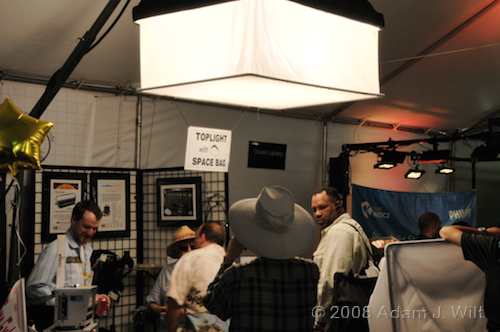 Any way you do it, you can’t go too far wrong with a top light in a soft box… or bag, as the case may be. 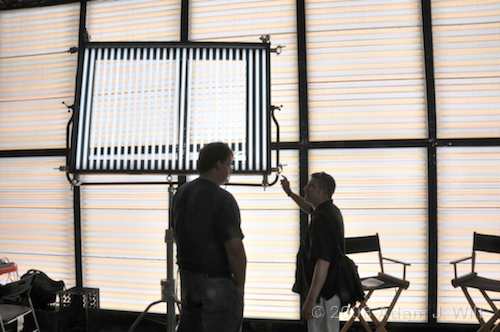 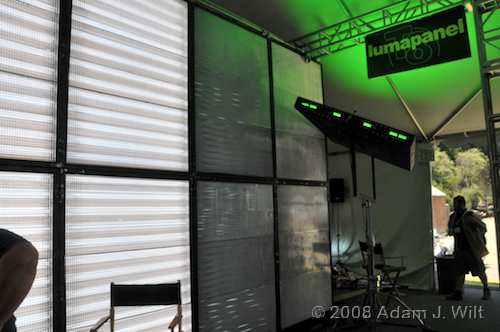 Whether mounted on trusswork or on stands, they’re big. 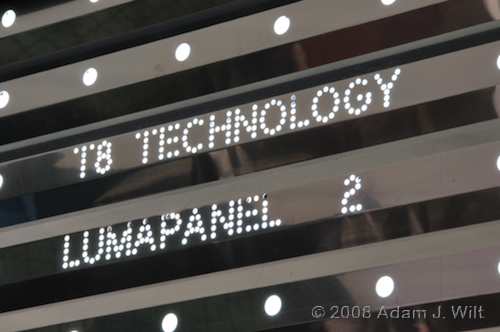 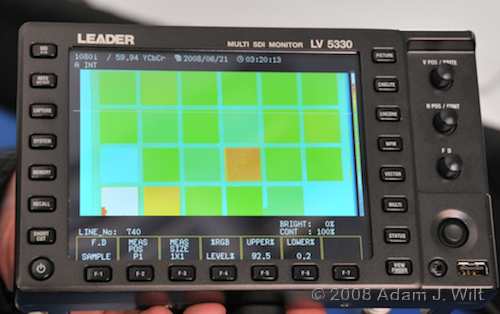 Leader is out to steal some thunder from Astro with the new LV 5330 on-camera monitor. It’ll show pix, waveform, vectorscope, embedded audio metering, WFM parade, and the “Cinezone” false-color display shown above. Colors are mapped to brightness levels, showing exposure zones directly. Here, the lower left white patch on the MacBeth chart is just heading into clipping. About six or so inches across; price will be in the US$6500-$8000 range when it ships. They have an eight-incher, too, for about $10K. 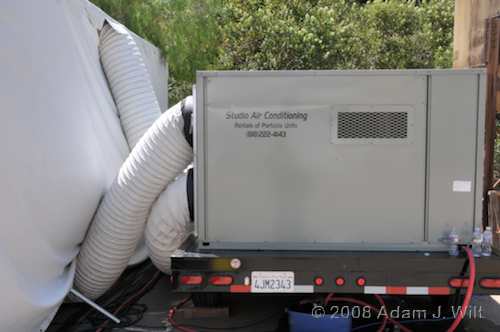 Outside the tent: a much-appreciated bit of support gear. 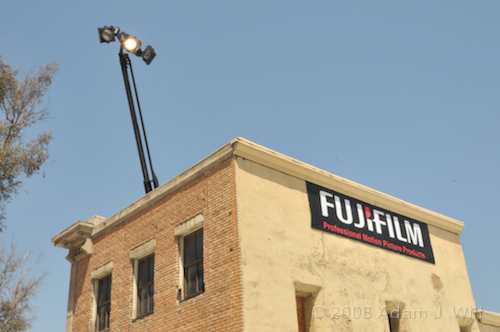 Lights on a boom. 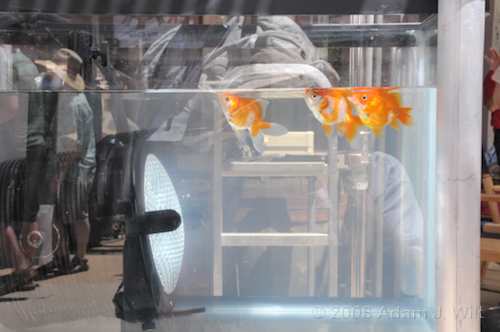 Light and fish in tank. 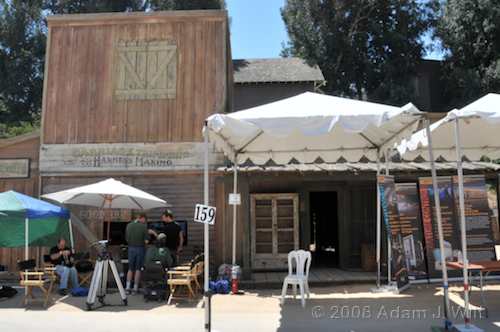 Part of the Expo was arrayed along the streets of this dusty Western frontier village on the Universal backlot. 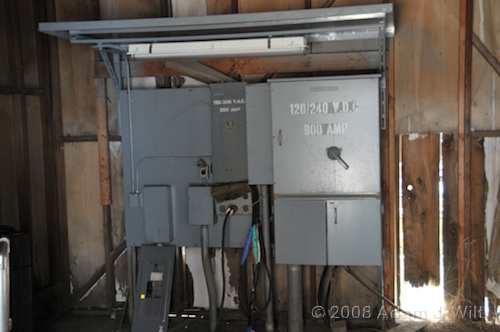 What’s inside the ol’ barn.

All these fronts are simply that: fronts. What’s inside? Lots of nothing, plus power distribution. 800 D.C. amps! 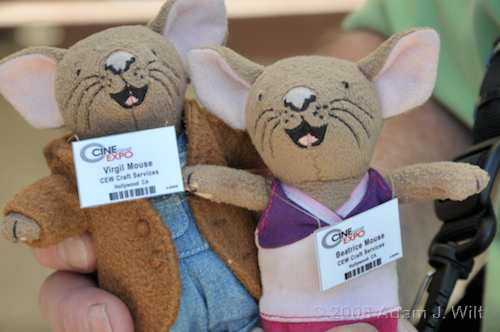 Even the mice were impressed.

Virgil and Beatrice Mouse, working the Codex Digital stand, were unfazed by the heat. Codex had two production-run portable disk recorders at the show (as well as the established rackmount recorder); they expect to be shipping to customers this summer.

RED didn’t have a booth this year, leaving a red gap to be filled by vendors like Element Technica, Sim Video, and others (more RED toys in the Day 2 report). 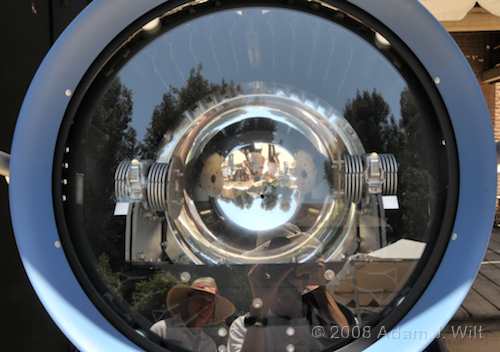 Size matters in this town. This is just the instrument itself, unlamped; those heat sinks you see are for the globe’s mounting socket. I didn’t dare ask what wattage this light runs, for fear of being made to feel even more inadequate…

Continue on to Day 2…

ProVideo Coalition has confirmed that Canon’s new VR lens is compatible with more headsets than the Quest 2, and...