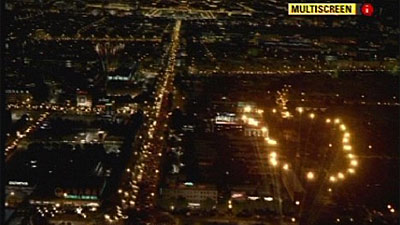 If the 21st Century, as I think it very well may, becomes known as the era of Things Are Not As They Seem (if the acronym TANATS catches on, you heard it here first), maybe we’ll look at one seemingly harmless moment in 2008 as a watershed.

Perhaps you were one of the billions worldwide who witnessed the Opening Ceremonies of the 2008 Olympics and was fooled by an aerial sequence of 29 giant pyrotechnic footprints leading to Beijing National Stadium, of which only one – the very last – actually occurred as depicted. The preceding 28, representing the Olympic events preceding this one, relied on our old friends the particle simulation, motion control and compositing (not to mention a glance at the Farmer’s Almanac for the likeliest weather conditions on the night of the event).

This of course is one more sense in which they would have been really screwed if it had rained that night (as it did all weekend) – and maybe you weren’t aware that Chinese officials are even trying to control that.

Not that there aren’t other precedents of misrepresentation in the name of controlled spectacle: these organizers evidently wouldn’t let the girl who sang the patriotic “Ode to the Motherland” appear as the singer, apparently because among 1.3 billion Chinese there are no sufficiently cute seven year olds with a set of pipes. It’s encourage to note the complaints among the Chinese about the message this sends to gifted singers with ordinary looks.

That substitution may lead to some serious need for therapy later in life – by comparison, the fireworks stunt seems harmless enough on the face of it. Sure, one could criticize that:

However, is there any doubt that in this Era of TANATS, something like this will cross the line? It’s easy to dismiss claims that the moon landing or Zapruder film were composited – we humans simply weren’t very good at that sort of thing in the 1960’s. That’s a pretty thin argument nowadays, when images continue to shape our lives despite how used we are to their fabrication. My kids routinely ask if fantastic images – including the real ones – are real or fake, and have done so since preschool.

So maybe the question is when will be the first time billions of people are fooled by a fake live transmission and it actually matters to what we think about justice, right and wrong, good or evil?

That sounds grandiose. But this being the Olympics, one need look no further than the athletes themselves, and the question as to whether they have faked their performance with chemistry, to glimpse what a mess is created when we hope the rules of the past will get us through the reality of today, and tomorrow.

NOTE: No less a filmmaker than Errol Morris has posted a thorough and thoughtful blog entry on a related topic.