The multi-purpose camera ME20F-SH from Canon is the center of a Cinema Kit that will offer a system ready for cinematic applications. 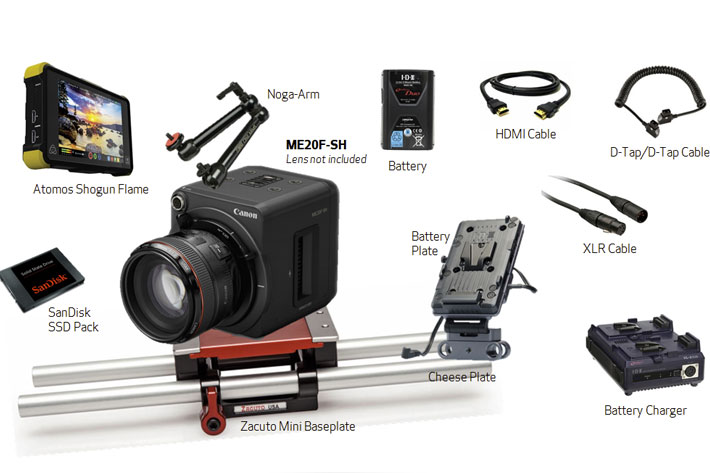 Designed for filmmaking and television production, the Canon ME20F-SH Cinema Kit is expected to be available this month at a suggested list price of $31,000.  The kit is one of the stars of Canon’s presence at NAB 2016.

The ME20F-SH kit accessory list includes the Atomos Shogun Flame external recorder, Zacuto mini baseplate, a SanDisk SSD pack, Noga Arm, HDMI cable, additional battery, battery and cheese plate, D-Tap/D-Tap cable, XLR cable and a battery charger that can also be used as a power adapter. All of these accessories make the ME20F-SH Cinema Kit ready for film and TV production as well as documentary work across a number of genres.

The camera offers a CMOS sensor with pixels measuring 19 μm square1, which is more than 5.5 times the surface area of the pixels on the CMOS sensor featured in select top-of-the-line interchangeable lens cameras. Its large pixel size enables the ME20F-SH to deliver magnificent imagery in normal lighting conditions, while also possessing the high sensitivity to capture Full HD video in less than 0.0005 lux3 (at maximum 75 dB gain setting, equivalent to an ISO sensitivity of more than 4,000,000). Along with its modular body and compact size, the image quality delivered by the ME20F-SH camera allows users to capture clear images in even the most demanding of applications including cinematic production, reality television, and nature/wildlife documentaries.

One example of the usage given to the camera comes from David Klein, ASC, cinematographer of The History Channel’s upcoming drama series SIX. Klein says: “We’ve been using the ME20F-SH camera to simulate military-grade night vision goggles and no other camera can simulate night vision goggles like this – it’s the only machine that could do what we needed.“ 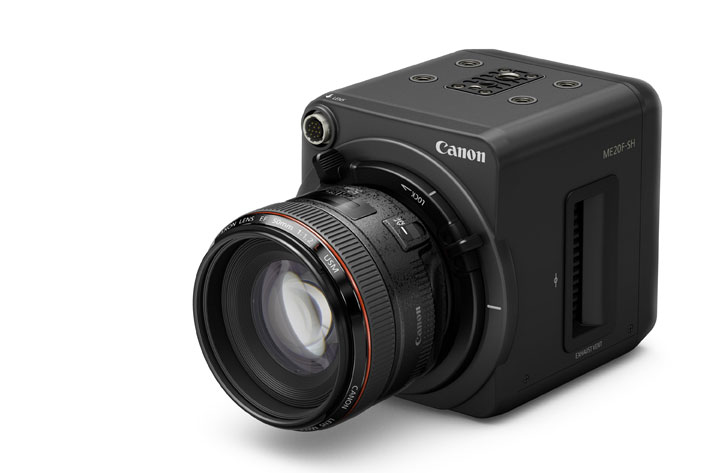 “The camera takes sensitivity to a new level; its high end is not just noteworthy, it’s mind blowing. When we shoot with the ME20F-SH camera, nearly every light is turned off or knocked down to nothing, and the camera does the rest,” added Dominik Mainl, SIX’s First AC.  “I know this camera is capable of over four million ISO, but we found a remarkable singular image around 600,000 ISO, where signal to noise ratio was suddenly irrelevant.”

“Since its introduction in 2015, the ME20F-SH camera has been an incredible tool for cinematic production,” noted Tim Smith, senior advisor, Film & TV Production, Canon U.S.A., Inc. “It produces phenomenal light sensitivity that enables incredibly clean images in standard lighting conditions, and remarkable color imagery up to ISO 4,000,000 even in extremely low light. This new Cinema Kit empowers filmmakers to have a turnkey solution to shoot with minimal lighting equipment or additional gear.”