The Canon EOS C70 is here. The camera is one of the highlights on Canon Vision – a platform launching today which reproduces the trade show environment virtually.

The first to combine the image quality of Canon’s Cinema EOS System range with the portability and flexibility of the EOS R line-up, the Canon EOS C70 may be the start of a whole new line.

As expected, the much-rumored Canon EOS C70 brings the power of the RF Mount to Canon’s Cinema EOS System range. Canon kept its CXXX series within the EF Mount and tries the RF Mount in a model that is perfect for a broad range of uses including documentaries, productions of all sizes, news gathering and now even social media – thanks to its unique vertical shooting capability. It’s a clear invitation for filmmakers just starting or those shooting for social platforms to try a new camera, which can be used as an entry ticket to Canon’s Cinema EOS System.

The Canon EOS C70 confirms Canon’s intentions to rapidly integrate the RF Mount into its solutions for filmmakers. Furthermore, the camera’s size and features enable filmmakers to shoot handheld or on a drone or gimbal – giving them enhanced creative freedom. It does not stop there, though, as it offers multiple recording formats to SD cards – including 4K up to 120 fps in 4:2:2 10-bit in XF-AVC (All-I or Long-GOP), and MP4 in HEVC (H.265) or H.264 – providing filmmakers with the ability to meet diverse production requirements.

The RF Mount, first used in Canon’s EOS R mirrorless cameras, has been so much praised for the new options it offers in terms of lens design that this move is not surprising. If all that has been said before is true, then, for the first time ever, filmmakers using a Canon Cinema EOS System camera can enjoy the incredible possibilities of the powerful RF lens range. Although this is a completely new cinema camera, one that bridges the gap between two Canon product portfolios – the compact DILC line-up and Cinema EOS System cameras.

Cinema quality in a compact camera

According to Canon, filming with DSLR and mirrorless cameras is growing in popularity, and while the EOS C70 is neither, it offers an alternative path for those who want a true “cinema camera” in a compact format. Canon did try this previously, to a certain extent, with the almost forgotten XC15 4K Video Camcorder, from 2016, a 4K UHD digital video camcorder for professional use that achieves high-image quality with a lightweight, compact body, but the EOS C70 is something new, starting with the fact that it is the first cinema camera from Canon to use the RF Mount.

Some rumor websites suggest that another model may soon be revealed, a EOS C50 that will be the true entry-level camera, but for now the highlight is on the EOS C70, a compact, versatile camera that despite being the smallest and lightest in Canon’s Cinema EOS System line-up, is packed with features that support a versatile range of professional video requirements.

Features present include 13 assignable buttons, a multi-functional hand grip for ease of operability, professional input/output terminals including HDMI and 2x mini XLR terminals for audio, as well as an independent ventilation system. Additionally, a new, thinner ND filter system, which gives up to 10-stops of ND filtration, provides filmmakers with greater control of exposure and depth of field. 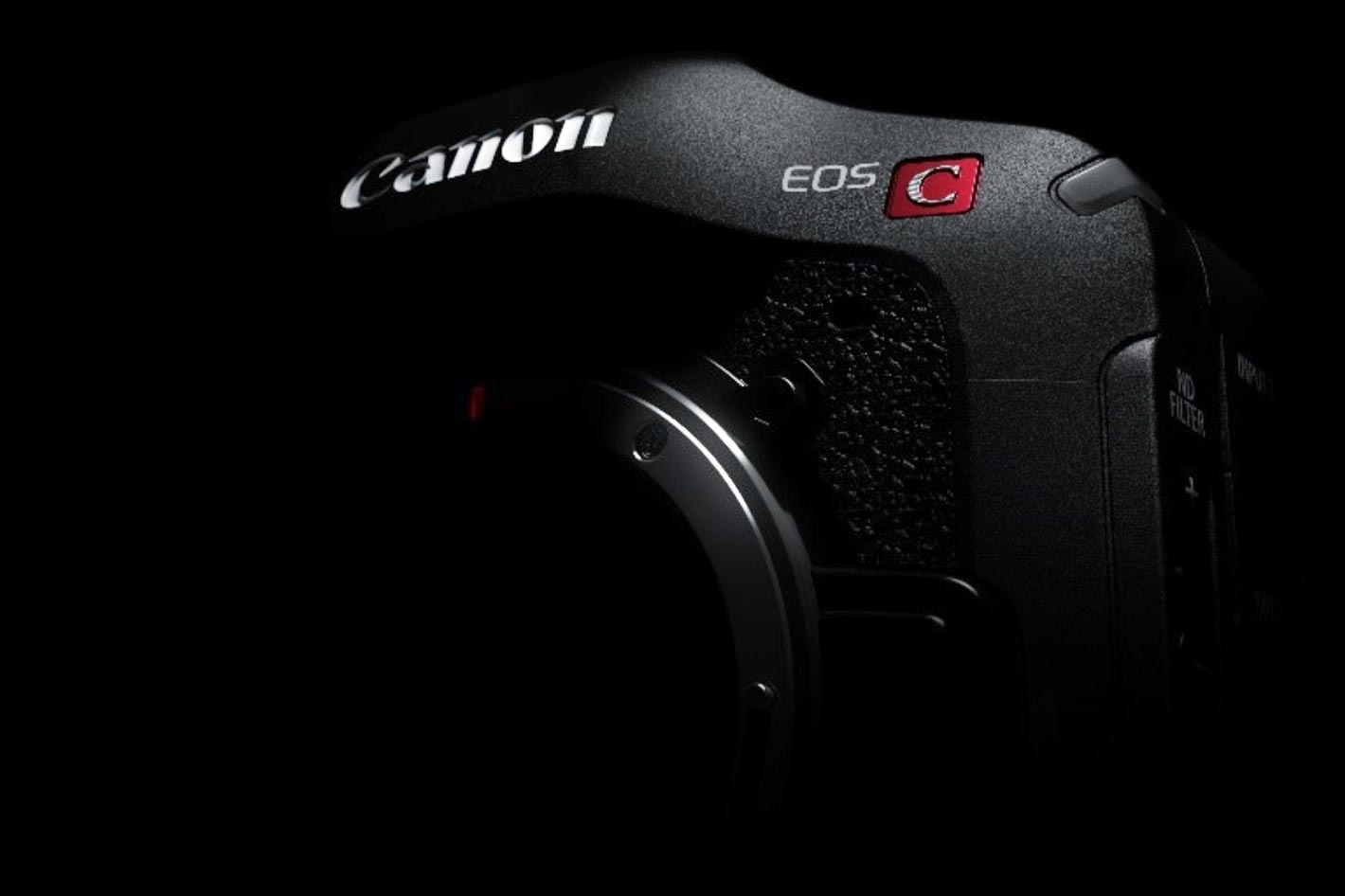 Bringing the world of RF to cinema

With the EOS C70 the company lays out plans for the future, stating that “Canon’s RF lens line-up is renowned for its excellent image quality and functionality” and adding that “the Mount technology is engineered to provide advanced benefits for video use and is ideal for Canon’s Cinema EOS System range.” Such capability gives filmmakers using the EOS C70 a comprehensive choice of high-quality lenses from the expanding RF range – including telephoto, zoom, high-quality primes, wide aperture and macro lenses.

Filmmakers are not limited to RF Mount lenses, though, as a new accessory was introduced: the Mount Adapter EF-EOS R 0.71x  – an EF Lens to RF Mount adapter giving filmmakers the freedom to use the entire EF lens line-up with the EOS C70, enhancing compatibility across two of Canon’s most popular lens lines. Canon used the same strategy with its mirrorless EOS R line of cameras, and it makes absolute sense to apply the same logic for the EOS C70.

Three lenses are full supported without a firmware update: EF 16-35mm f/2.8L III USM, EF 24-70mm f/2.8L II USM, EF 24-105mm f/4L IS II USM. Lenses other than full-function lenses can also shoot with a brighter f-number with an equivalent angle of view as full frame. Canon plans to gradually expand the list of compatible lenses by providing free-of-charge firmware updates in 2021. EF lenses are still compatible with the camera, but Canon recommends that firmware updates be installed in order to effectively utilize functions which link the camera and lens.

The Mount Adapter EF-EOS R 0.71x employs an optical conversion to capture a Full Frame angle of view of an EF lens even when used with a Super 35mm sensor, as well as an increased light transmission of approximately 1-stop. The adapter enables full communication between the EF lens and camera body, providing continued support for Canon’s extensive range of EF lenses. Auto Focus, peripheral illumination and chromatic aberration correction, and the transfer of lens metadata is also fully supported when using the Mount Adapter EF-EOS R 0.71x. 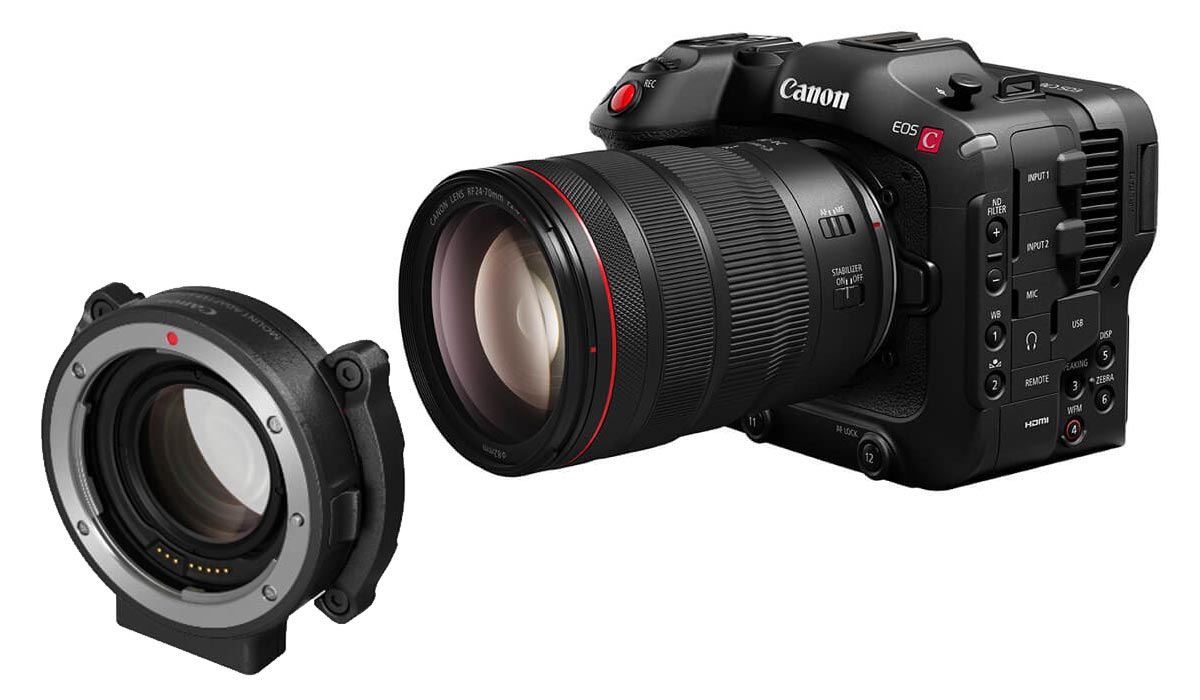 For optimal image stabilization, the EOS C70 enables Combination IS which brings together the Optical IS in RF lenses and the Electronic IS in the camera body for outstanding stabilization performance – even when shooting handheld. The enhanced communication capability between the lens and the camera also unlocks additional features such as the ability to display the object distance on the camera’s LCD monitor.

Moreover, the company says that “thanks to the DGO sensor, and powerful DIGIC DV 7 processor the EOS C70 is an ideal choice for professionals looking to produce high-quality content in 4K. It also supports slow motion capture with 4K 120p recording – with Dual Pixel CMOS AF support, as well as audio recording. For those who desire higher frame rates, 180p is also available in Super16 mode. Recording to Dual SD cards in Canon’s XF-AVC format with 4K 4:2:2 10-bit, the EOS C70 captures high resolution footage for a wide range of applications, from documentary and journalism to music videos and web-based content.” 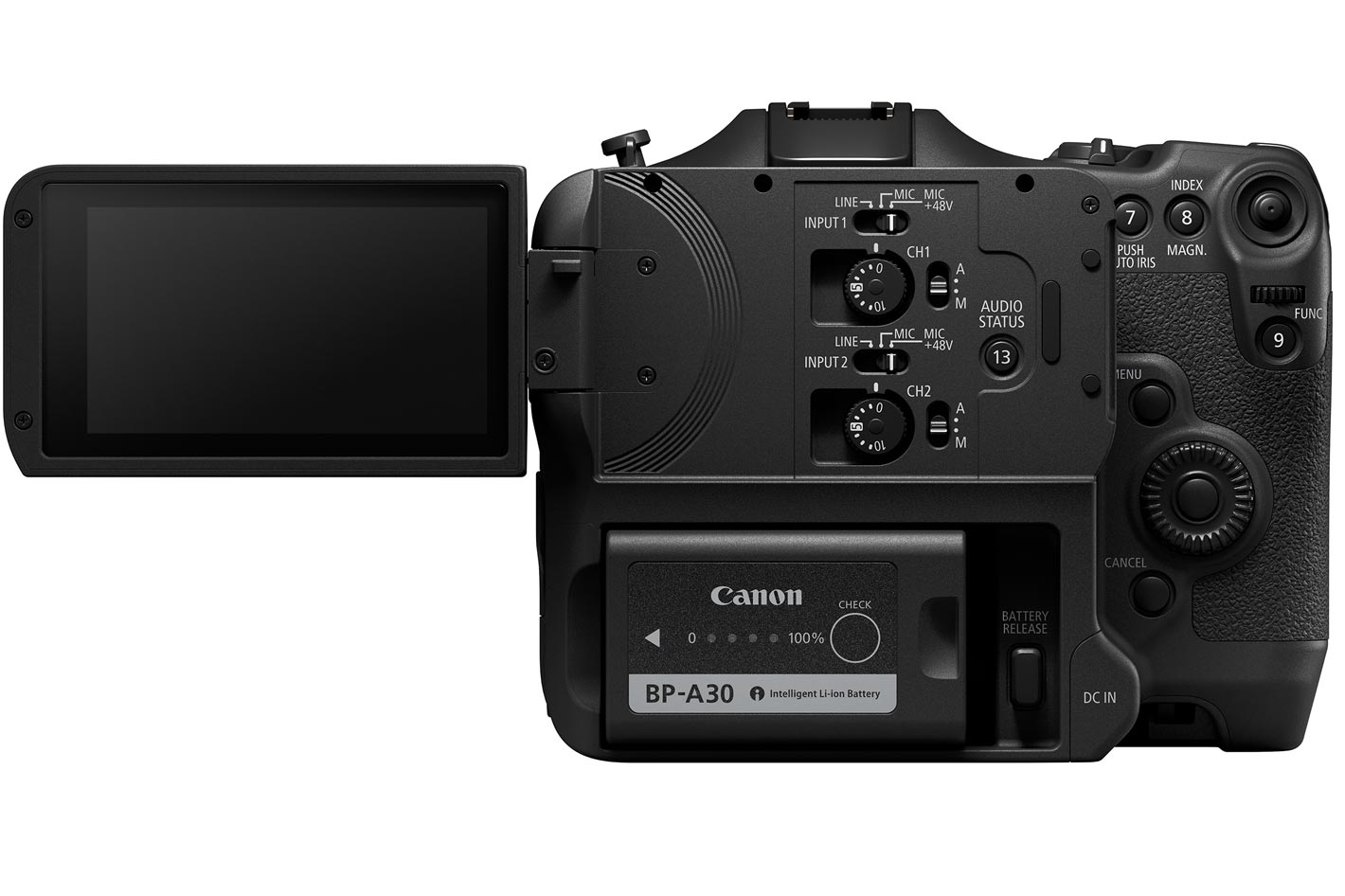 A series of firsts for the Cinema EOS System

The EOS C70 is not just a first RF-Mount model added to Canon’s cinema line, the camera also boasts a number of ‘firsts’ for the Cinema EOS System range. In addition to supporting Canon’s renowned Dual Pixel AF System, it is also the first Cinema EOS System camera to feature the revolutionary EOS iTR AF X (Intelligent Tracking and Recognition) system seen in the EOS R5 mirrorless camera. The system uses a face and head detection algorithm developed using deep learning technology. Working in conjunction with Face Detection AF, this feature greatly improves the reliability of focusing on, and tracking the subject.

The EOS C70 introduces Auto ISO to the Cinema EOS System range for the first time and Canon also breaks new ground with the EOS C70, as the first Cinema EOS System camera with a dedicated vertical shooting mode, designed to support the capture of content for social media and digital signage.

On building the EOS C70 Canon aimed for two key aspects, important for the type of users targeted with this model: simple storage and workflows. The EOS C70 features several recording options at resolutions from 4K, UHD, 2K, and Full HD. Designed for content producers who want to streamline their post production workflows, the Dual SD card slots support high-speed UHS-II media – with a variety of configurations such as double slot, relay and simultaneous recording. For the first time in a Cinema EOS camera, it is now possible to record different formats, resolutions and bit depths on each media card slot, offering a truly flexible workflow. 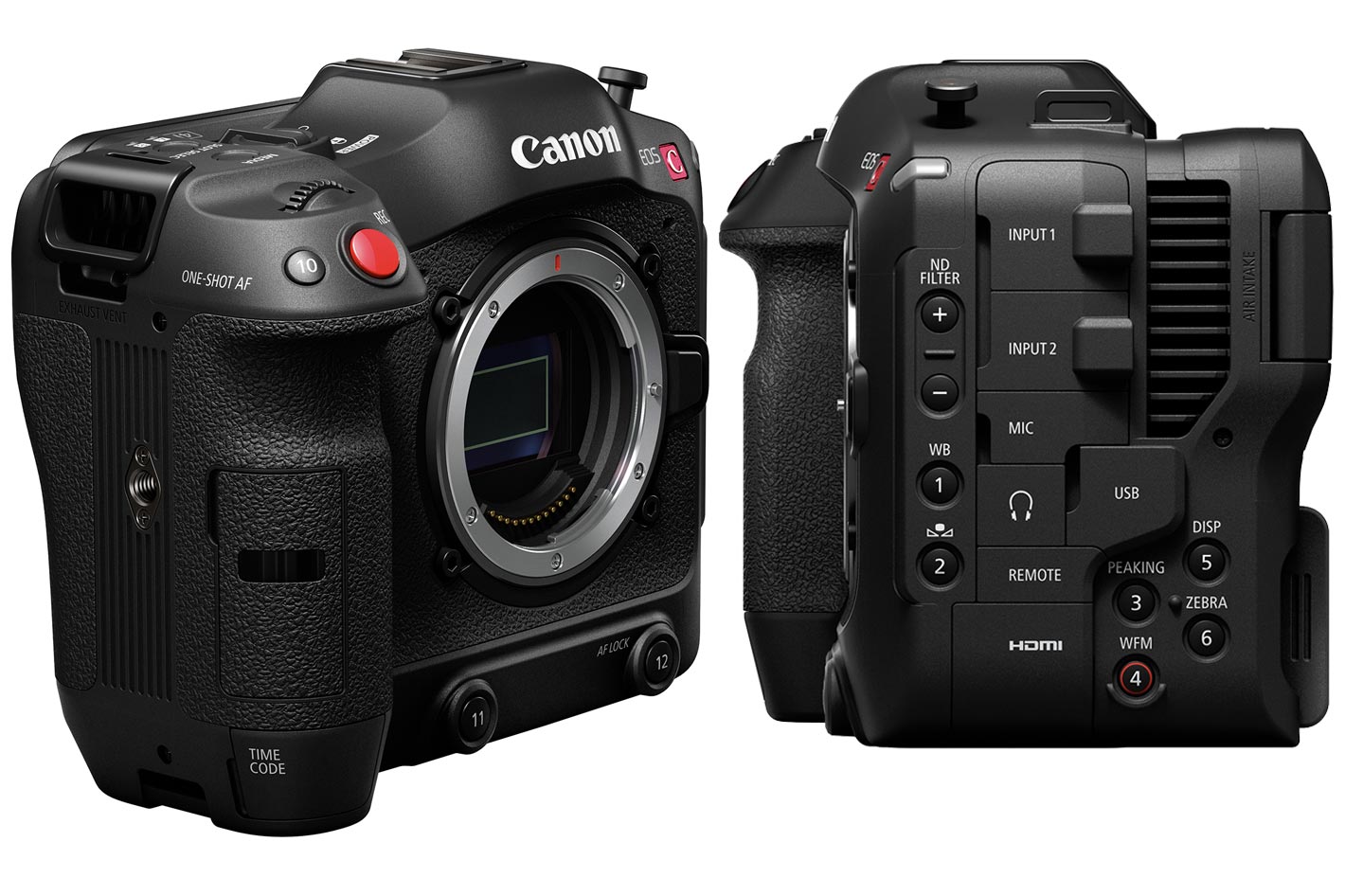 TLDR The Canon EOS-C70 is the smallest, most-affordable 4k capable EOS Cinema camera yet. It is well positioned for... 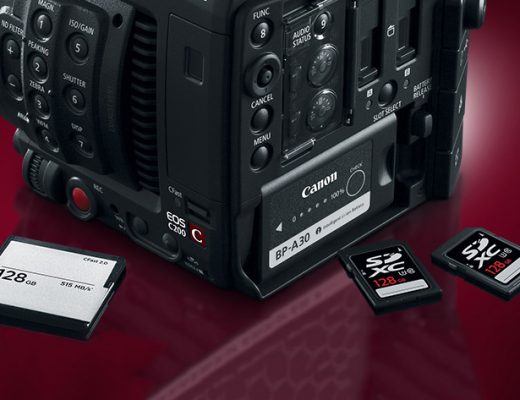 The CFast 2.0 card inside the EOS C200 pairs with the new Cinema RAW Light format to allow capturing... 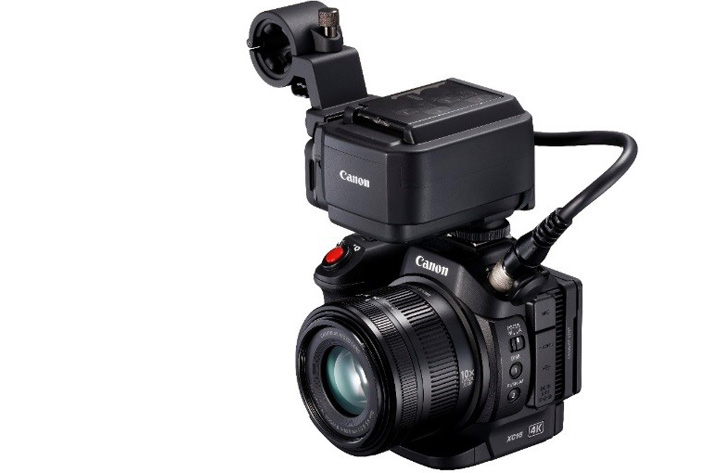 The Canon XC15 4K (UHD) and Full HD video camcorder with stills capability, aimed at content creators such as...