With the EOS C200 Canon introduced Cinema RAW Light, a new format that immediately raised a lot of questions. For Canon it is more than a codec, it’s, among other things, a dream for VFX intensive workflows. 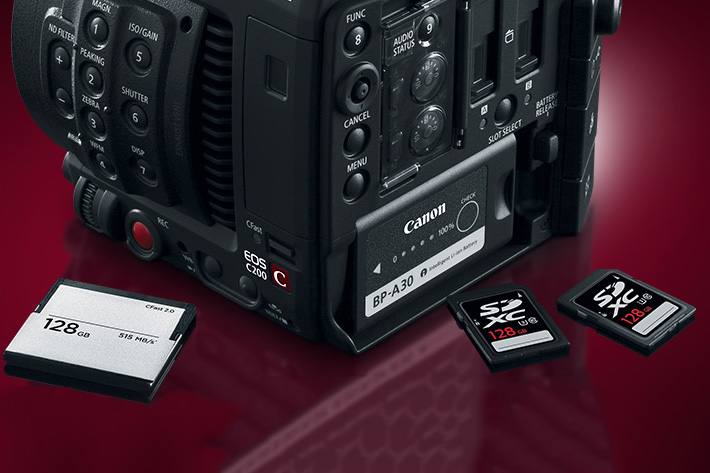 The CFast 2.0 card inside the EOS C200 pairs with the new Cinema RAW Light format to allow capturing footage internally. An interesting solution, but one requiring a different approach to post-processing.

Since Canon introduced its new format, Cinema RAW Light, with the EOS C200, multiple questions have been raised about the format, and whether it is a viable path or a dead end. From the ironic “all we needed was a new format” to the inquiring “we want to know more”, the reactions are diverse.

We’ve had an idea of what is possible to achieve with Cinema RAW Light through the documentary “From Dock to Dish”, used by Canon to promote its new EOS C200. Although director Andrew Fried and DP Bryant Fisher were working with Canon on this documentary, their experience in the field hints at what the camera and format bring to the industry.

Bryant Fisher told readers at ProVideo Coalition how the team felt about Cinema RAW Light and his specific answer was that it “definitely works and you can see the difference. What’s nice about having a format like RAW Light is that you’re not getting a compressed image in post. It’s not uncompressed but it’s hefty, very clean and carries a lot of data so you push it around later. The big benefit to this is better color accuracy and less chance for artifacts. In post you can use Canon’s software to change things like color temperature, color space and even gamma. We were in environments where detail was important to our story. Fish scales, water, skin tone under various lighting, fire and colorful food. These are sometimes challenging things to capture even when you can light and control the scene. We had little control and that didn’t hold us back during production.” 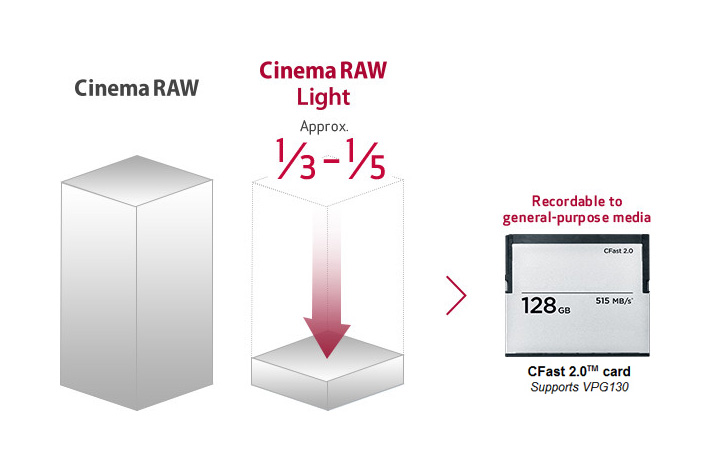 The whole interview puts some more light on the subject, and represents a real world experience of the new camera and new format. But it does not answer all the questions, and to know more about the format nothing better that to read what Loren Simons, a Canon Hollywood Professional Technology and Support Center Senior Product and Sales Trainer wrote at Canon’s DLC (Digital learning Center).

Loren Simons, who started his adventures into the depths of the technical world while he was a middle school student in Southern California, warns that “Cinema RAW Light requires a different post-production process than the traditional RAW workflow you may be accustomed to with the EOS C300 Mark II or EOS C700. Cinema RAW Light does not record in the frame-by-frame file structure of a traditional RAW format. Instead, using a proprietary format developed by Canon, the RAW information is compiled into a single Canon RAW Movie file, or .CRM.”

The way the file is saved explains, to a certain extent, why this new RAW is “light”. In fact, as Canon claims, Cinema RAW Light, which is available in 4K 60p/50p at 10 bit and 30p/25p/24p at 12 bit, allows users to record data internally to a CFast card by cutting data size to about one-third to one-fifth of a Cinema RAW file, without losing grading flexibility. Due to the reduced file size, users will appreciate rich dynamic range and easier post processing without sacrificing true 4K quality. Alongside recording to a CFast card, proxy data (MP4) can also be simultaneously recorded to an SD card for use in offline editing.

Once a Canon RAW Movie is recorded, continues Loren Simons, “ it then needs to be unpacked in one of two ways. The first and more traditional route would be utilizing an updated version of Canon’s RAW Development Software. At its core, this software allows for the unpacking, modification, and debayering of Cinema RAW Light files. Modification is the key phrase here, as we have the opportunity to modify the parameters by which our footage is debayered. EOS C200 captures its RAW information in a proprietary RAW Gamut and RAW Gamma. This data needs to be taken from their RAW spaces, and conformed into one of the many gamma curves or color spaces to begin the post-production process.” 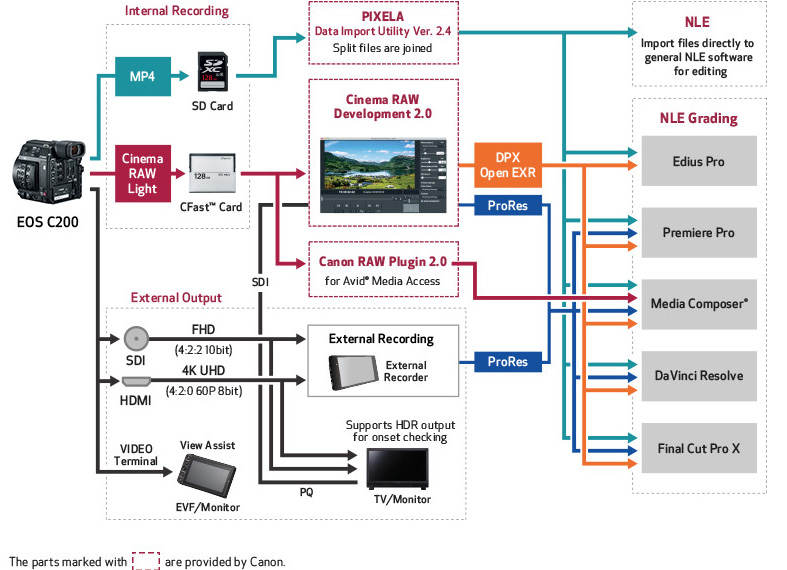 The technical explanation, together with tables and graphics, draws a complete picture of the format, while also pointing to the alternative formats the camera offers. It’s a document that those interested in the EOS C200 should read. Just follow the link to the article. While there, and to expand your knowledge of the camera, also read “Production Brief with the EOS C200”, a detailed explanation of the EOS C200.

Something to retain here is what Loren Simons says in the article: “imagine a world where we can shoot 12-bit high data rate media, ingest it into our NLE, and be able to change key factors on the fly such as white balance or color space. This is where Cinema RAW Light becomes more than a codec, and instead a malleable format within your NLE that allows for seamless creation of different compliant passes easier than ever before. With the abundance of metadata available as well, it’s a dream for heavy VFX workflow.”

If the documents above don’t quench your thirst, there is an Introduction to Production & Post Production with EOS C200 on July 19, 2017. Join the team of professionals at Canon Burbank for a presentation by Loren Simons. After a brief presentation of the camera, participants will have the chance to experience the EOS C200 from both a production and post-production perspective.

The presentation will demonstrate how the camera handles skin tones and color charts inside of Canon Burbank’s Prep Bay. Film a live model on controllable-lit set in the showroom. For those more interested in post-production, push and pull Cinema RAW Light footage in the SGO Mystica system using a 4K projection in Canon’s DI Suite, or perform an HDR pass using DaVinci and Canon’s DP-V2420 in the Edit Suite. The presentation is free and is open to anyone interested in discovering more about the new Canon Cinema camera.