The Canon EOS-C70 is the smallest, most-affordable 4k capable EOS Cinema camera yet. It is well positioned for corporate and smaller budget projects, but it can rival its big brother C300 Mark III in image quality — although not in build quality. Despite a few physical quirks, the Canon EOS C70 is an excellent introduction to the EOS Cinema line.

Canon’s EOS Cinema line has been a fixture of mid-level and broadcast work since the introduction of the EOS C300 in November 2011. The C300 quickly became a broadcast workhorse for HD acquisition. It was followed by the C100, C500 and later other variants that added 4k and RAW capabilities.

The Canon C70, the latest addition to the line, is somewhat of a departure for Canon. It sits between the EOS R5 mirrorless camera and the flagship C300 Mark III, which both debuted in 2020. 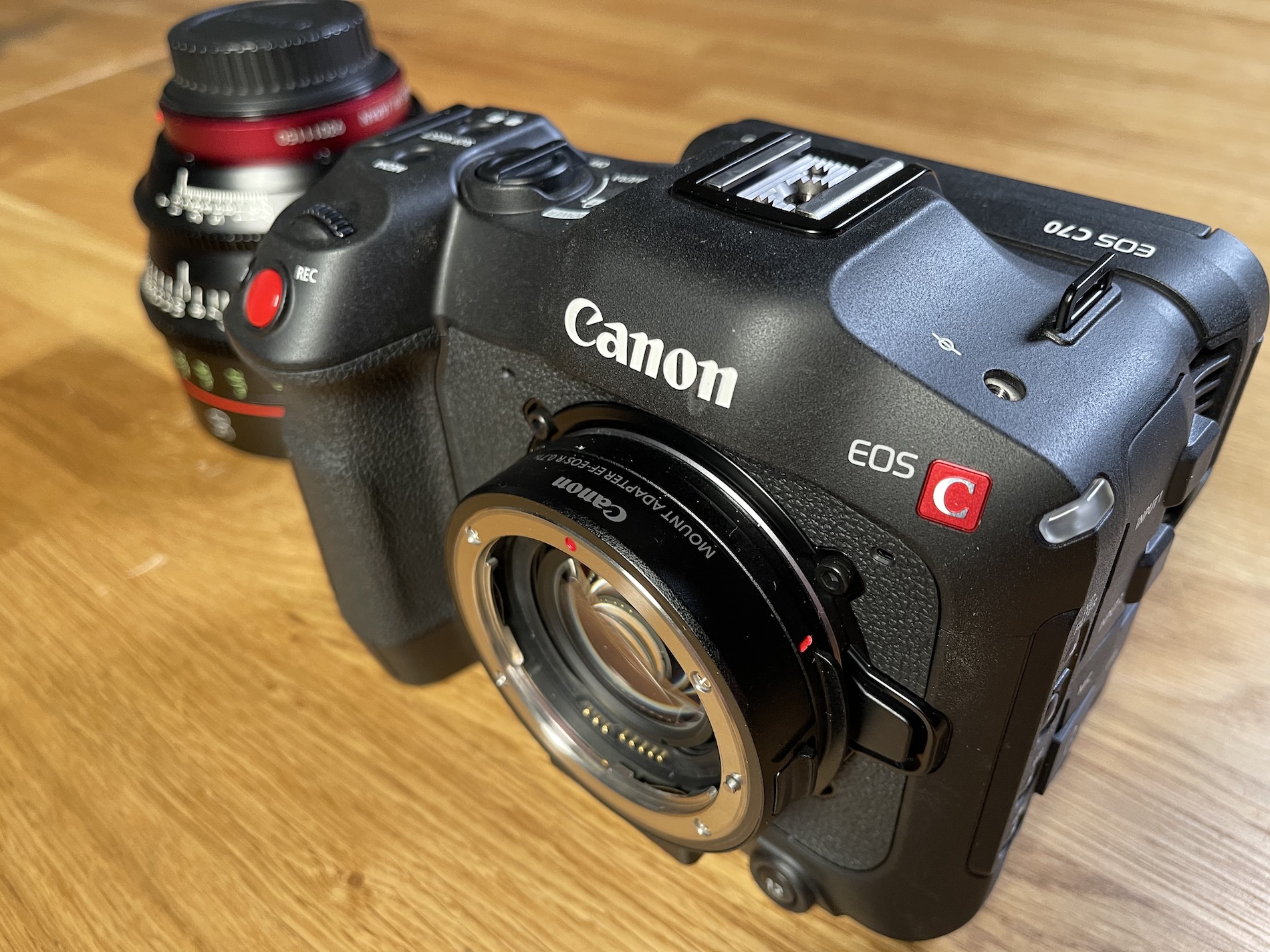 The C70 has achieved Netflix production approval as a primary camera when capturing in 4K 4096 x 2160. It also has inherited the Dual Gain Output sensor that appears to be same one that is in the C300 Mark III. 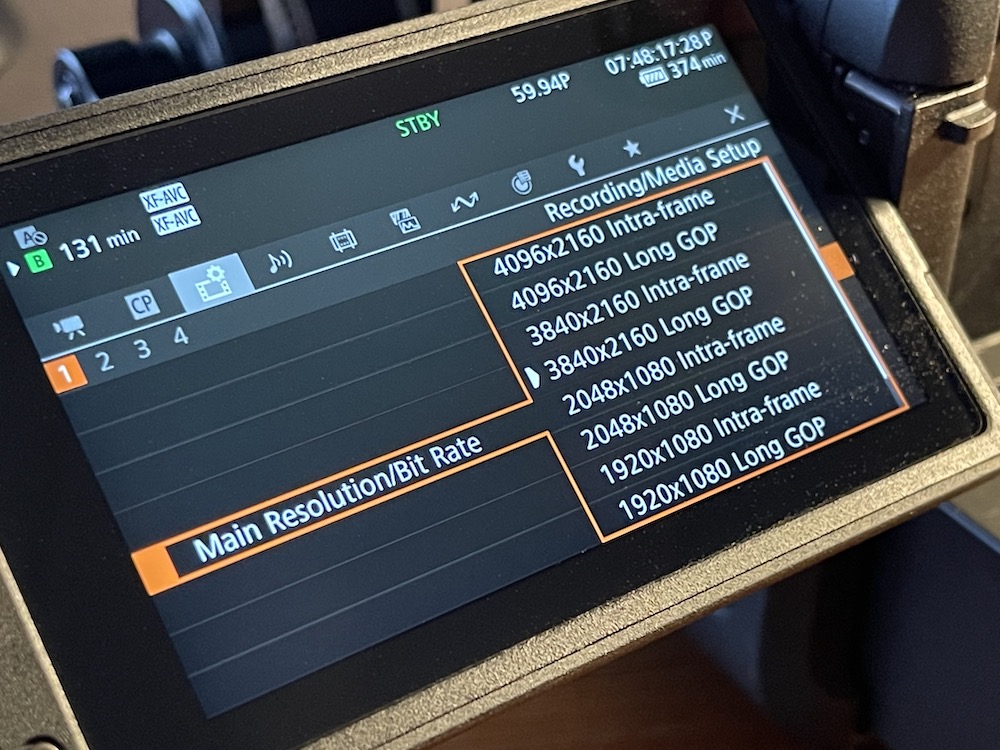 You can record 120 fps in S&F mode. The camera holds its full sensor Super 35 readout when recording 120fps. That means you don’t have to worry about a cropped field of view when moving to high frame rates. It’s nice to know that you get a consistent field of view across all frame rates.

Physically, it’s a bit larger than the R5 and but smaller than a C300 Mark III. It feels like a kitted up mirrorless photo camera prepped for video work. This camera has the C-series feel with 13 customizable buttons scattered around the body and a right side grip. It has an articulating LCD screen for a viewfinder that tucks into the back.

The C70 has a nice Digital Image Stabilization function.  When using an EF lens, the lens and body stabilize independently.  The C70 with an RF lens attached works together to provide stabilization. 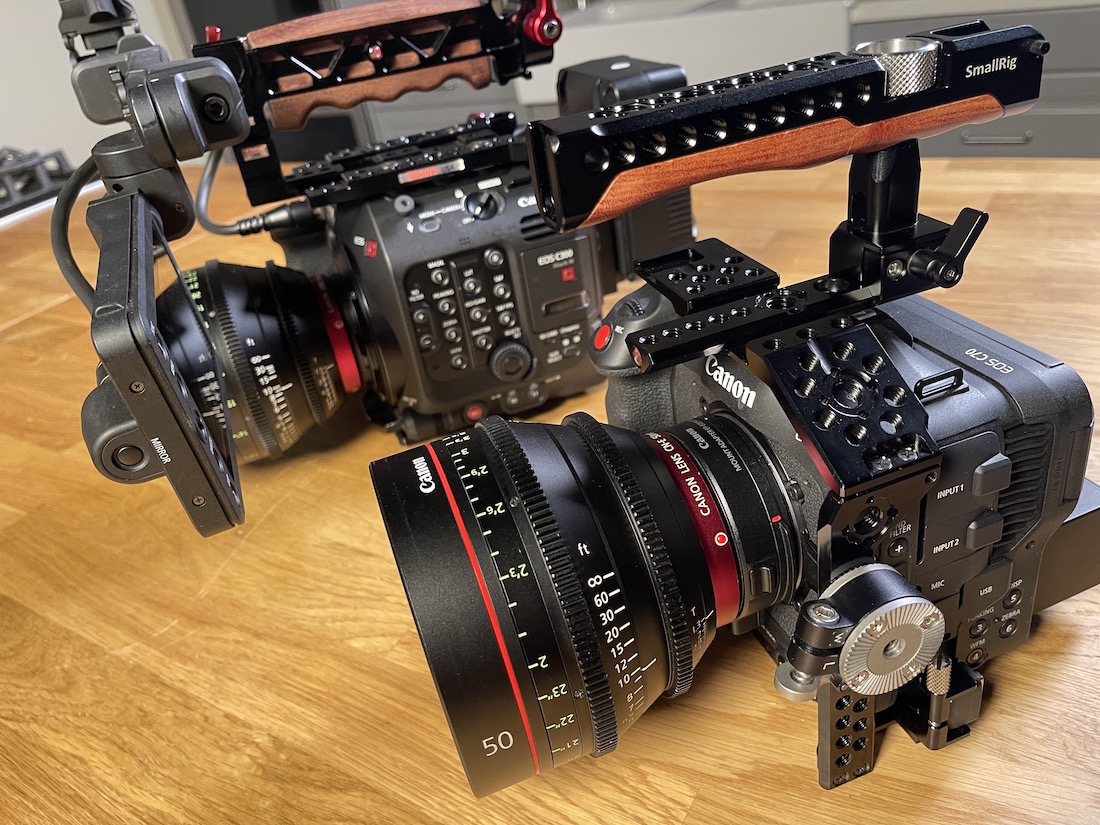 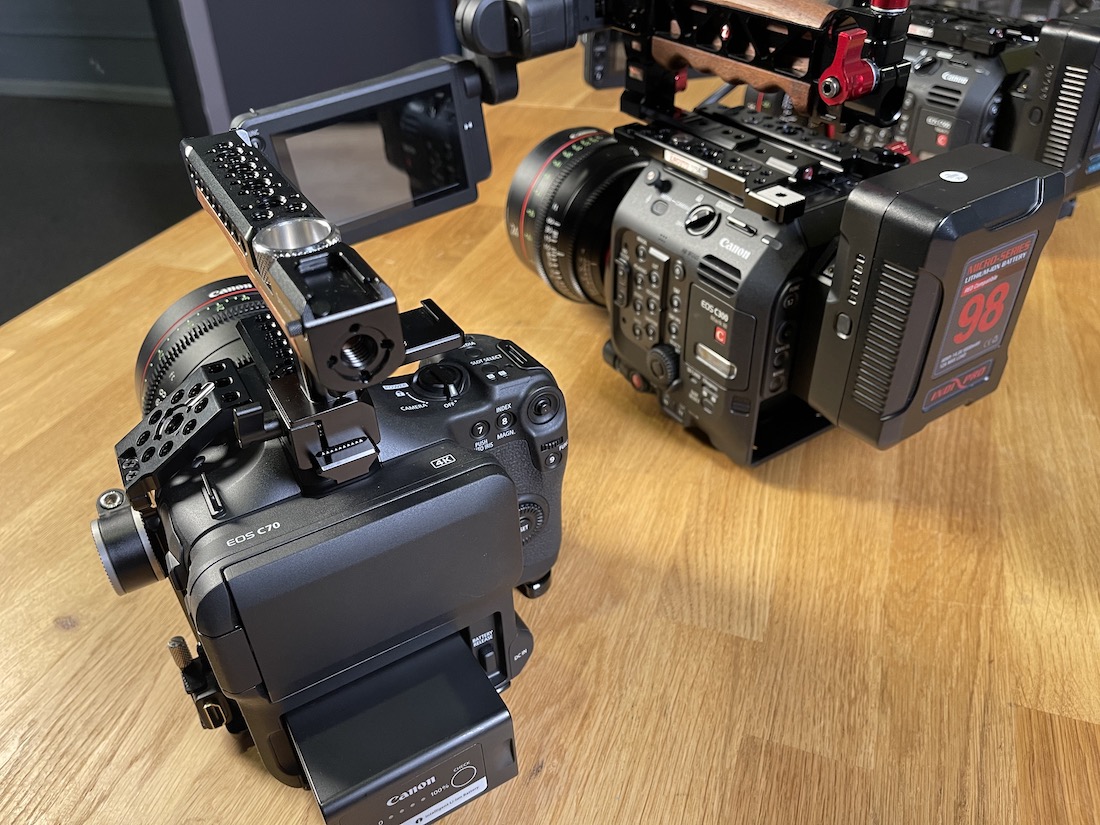 The joystick on the right side of the camera is one of the primary menu interaction tools, and that’s where I have my first problem with the camera.

To be honest, the joystick on my camera had issues. It sticks when moving left/right or up/down, and the push-in to select function is hit or miss. It is inferior to the other cameras in the EOS C range, include the comparably priced C200 and the older, battle tested C100. It is puzzling to me why Canon shipped a camera with this type of QC issue. My unit is scheduled to go in for service to have this fixed soon. 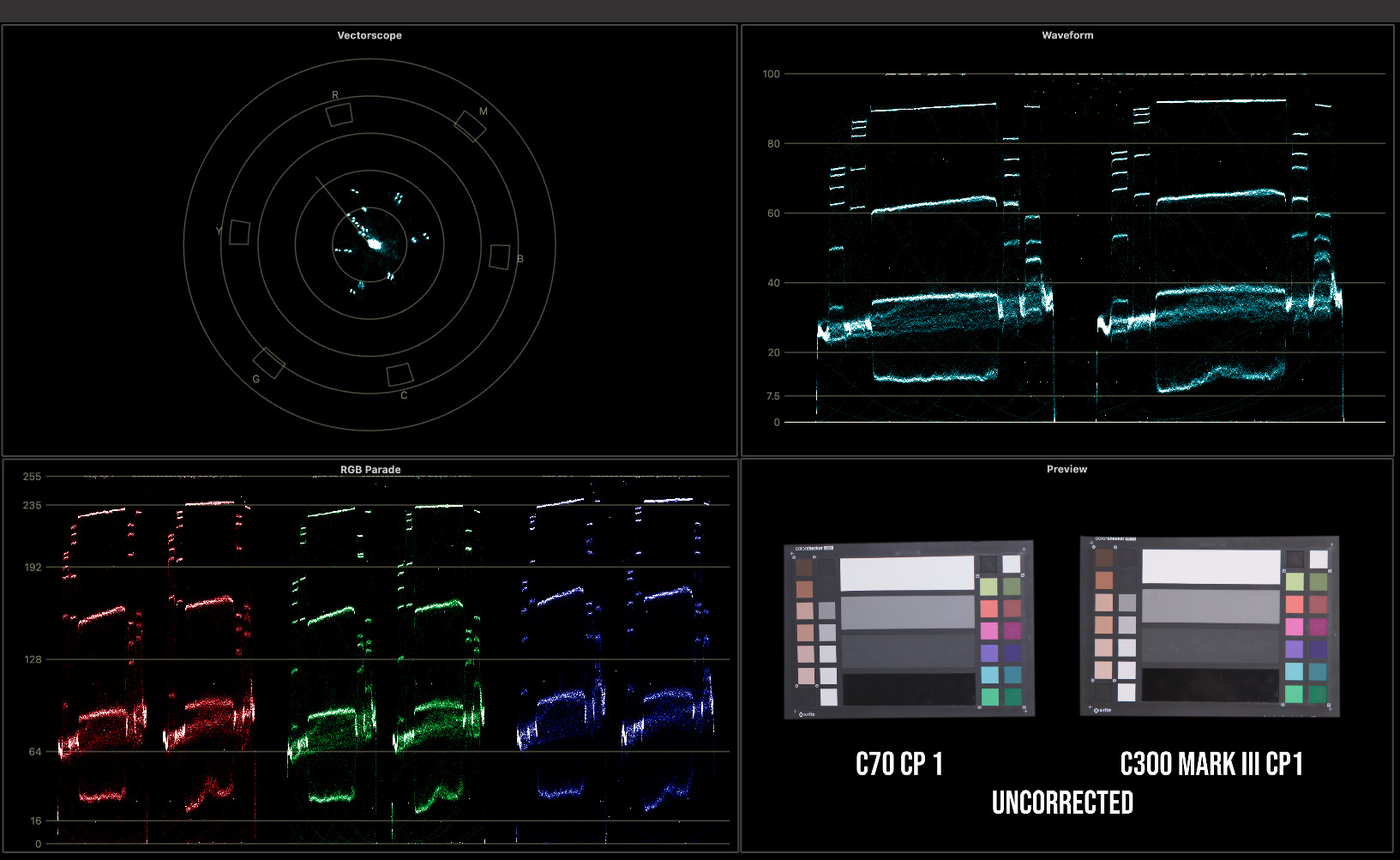 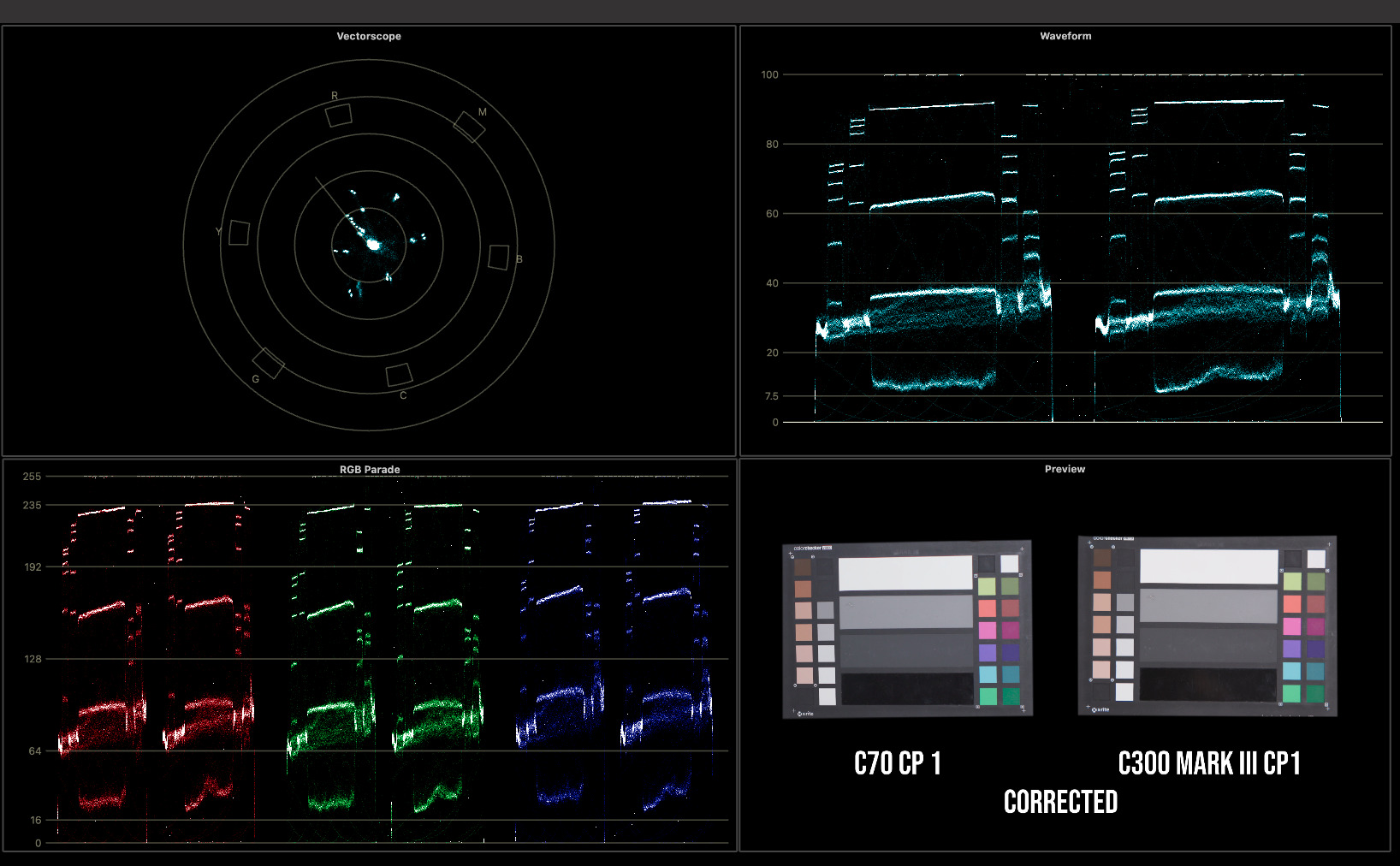 The C70 is Canon’s first EOS Cinema unit with their new RF mount. This mount is physically smaller in depth than the veritable EF mount. This allows the C70 to pack a much smaller footprint than the C300 Mark III.

The initial reason we purchased was to have a true cinema style camera to use on a slider or gimbal. A Panasonic S1H has been our primary “mobile” cam, but the footage takes a bit of finessing to match with our C300 Mark III and C500 Mark II. We wanted something in the Canon family that had similar colorimetry, was small and could run for a whole day with no issues. The C70 fits that bill on paper.

I want to look at three scenarios in which we use the C70. This is what we have seen in three months after buying and using the camera.

Finding the perfect b-cam for a main camera is somewhat of a Holy Grail quest. We’ve used the 5D Mark III and Mark IV, XC-15 and EOS R as b-cams with our C300’s with mixed results.

I believe Canon has created a great b-cam for their EOS Cinema line with the C70. But … there is always a but … it’s not perfect. 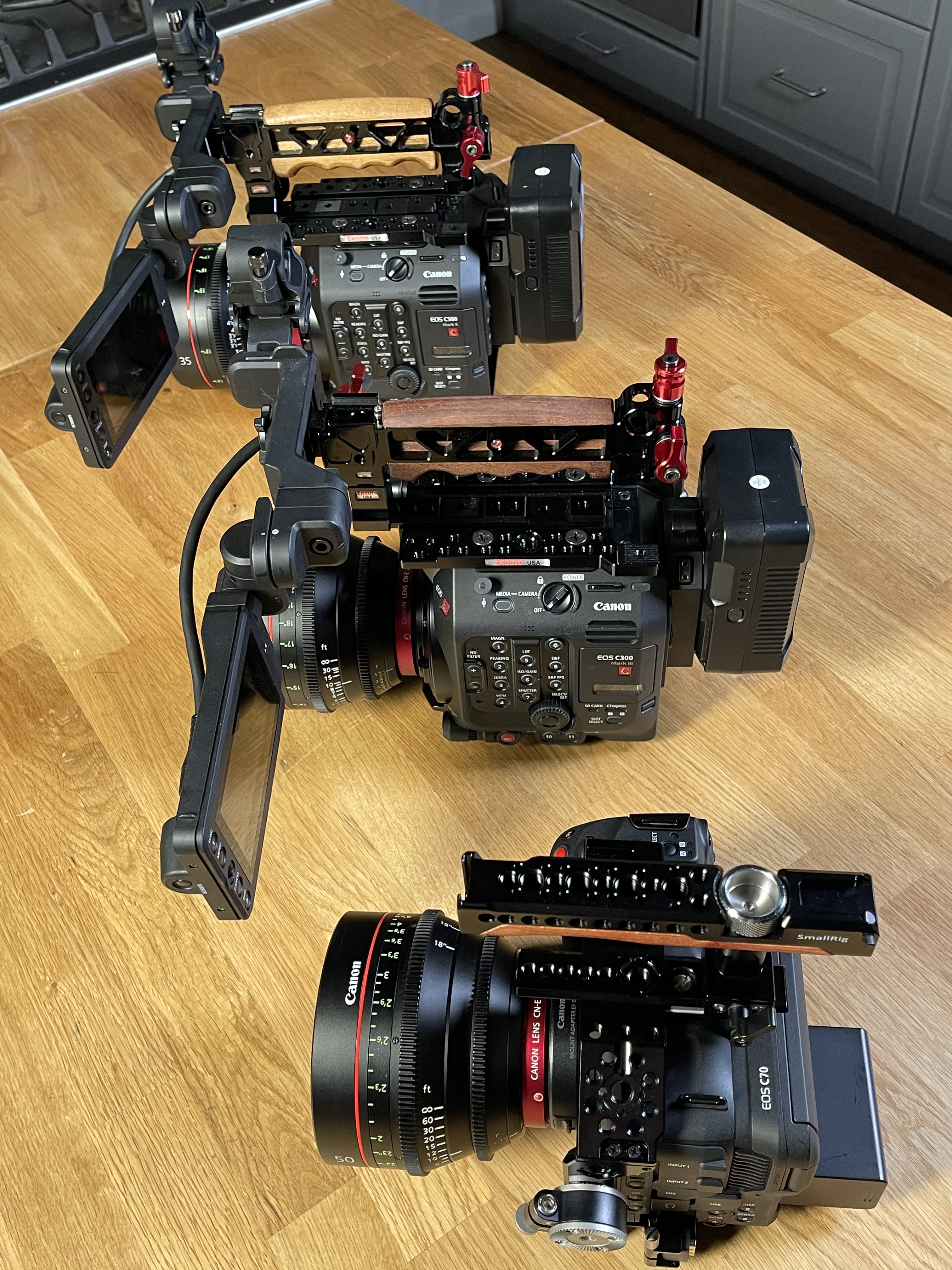 We recently paired the C70 as a third camera with the C300 Mark III and C500 Mark II for an in-studio culinary shoot. The project had a short turn and didn’t have a full color pass in budget, so we shot in Canon’s stock Color Profile 1 (BT 709/WideDR with Neutral Color Matrix) on all cameras. This Color Profile produces a good look in REC 709 space but provides some leeway for additional color correction if needed.

The cameras were kitted with Canon CN Primes, which provided closely matched lenses. The C500 was used as a wide, the C300 as a mid CU and the C70 in 60p for handheld food hero shots. 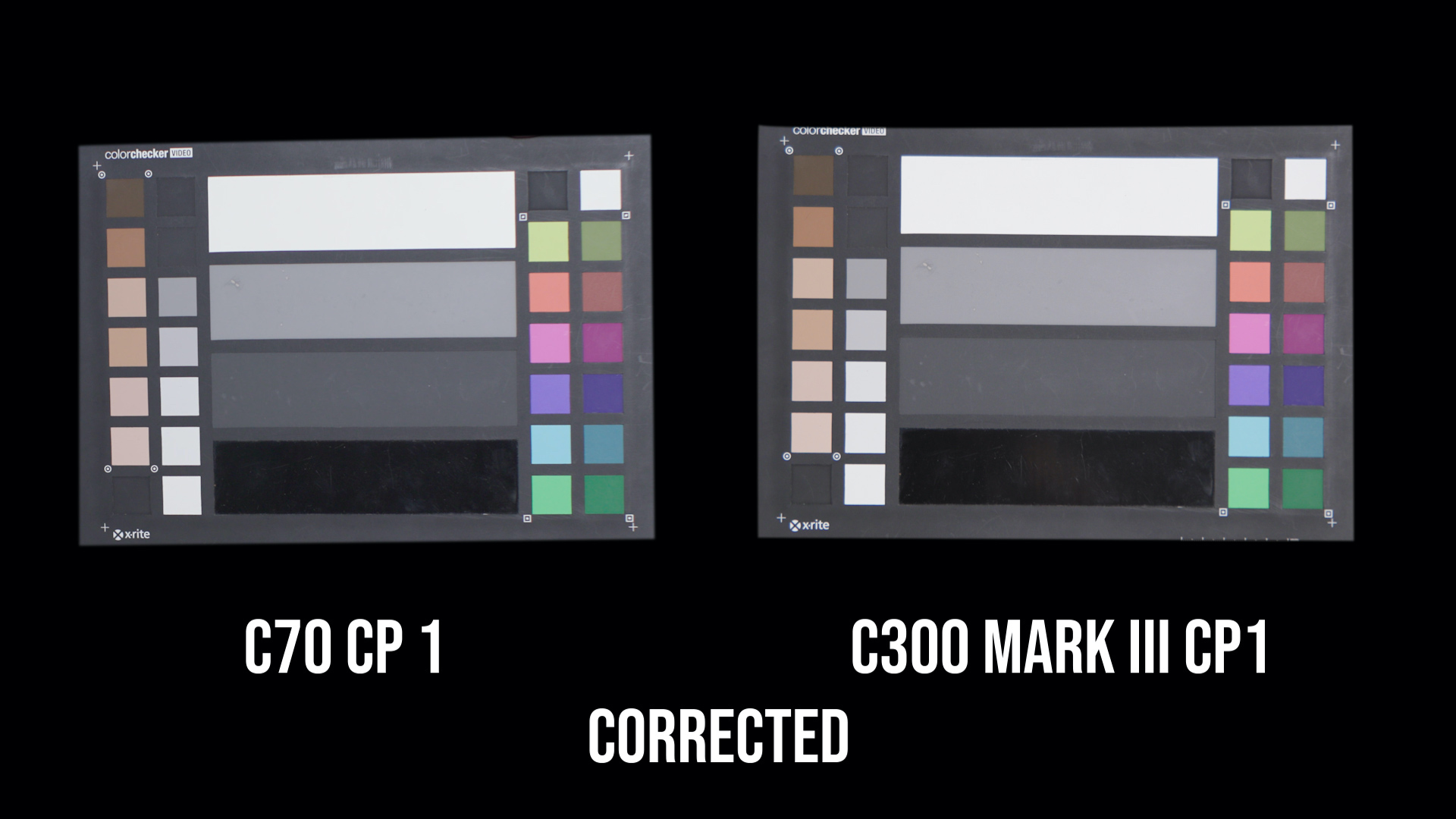 With cameras exposed to the same level, the color targets were basically identical, and the skin tone axis lined up exactly.

The cameras started to diverge between magenta and blue. The C70 skews magenta a few degrees off axis to the blue side of the scope versus the C300 Mark III. I added a touch of magenta and the differences essentially disappeared.

We saw the same results with the C70 and C500 Mark II. Skin tones, reds and yellows were spot on. The C70 needed a touch of magenta added to match the C500 Mark II.

The C70 color matches its bigger siblings better than any other mixed Canon camera setup I have used before. You are 99% of the way there out of camera for a great match shooting with identical gamma, color space and color matrix.

But keep in mind that even identical copies of lenses can have image variations. Your lenses can be a factor when trying to produce identical colors across cameras.

Using a Canon cinema camera on a small slider can be a bit of a challenge.

Our primary slider is a 24” Syrp Magic Carpet PRO Short Slider Kit mounted on a set of carbon fiber legs with a 75mm bowl. It’s a great unit, but a kitted out C300 Mark III with a cine prime lens plus V-mount battery weighing 11.7 lbs. would tip the slider a touch if pushed to either end. We could have replaced the tripod with two stands at each end or moved to a 100mm bowl tripod, but we wanted to keep as lightweight a unit as possible.

The C70, using a Canon BP-A60 battery and the same lens coming in at 7.5 lbs. rode the slider very well during studio testing. The ball attachment didn’t tilt or loosen at all with repeated movement. We even applied additional downward force to test the hold, and it worked well. The weight difference was more than enough to eliminate the slight tipping we were seeing with the C300 Mark III. 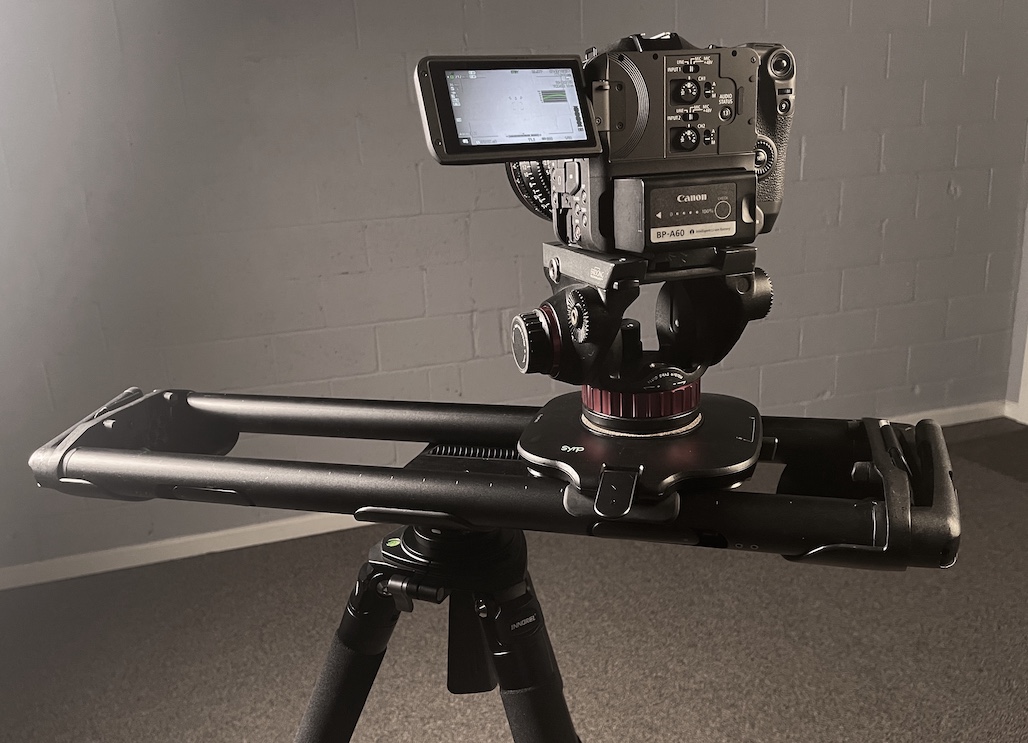 The real test was a mid-February shoot for a medical client. We had a two-camera interview set built for testimonials. The C70 was mounted on slider with a Pictor DZOFilm 50-125mm cine zoom. The DZOFilm is 1.05 lbs. heavier than the Canon CN 50 prime. I was a bit nervous that we might be approaching the dreaded tipping point.

The smaller weight and profile of the C70 coupled with the Pictor DZO cine zoom passed with flying colors. We ran the camera/slider combo all day with no tipping or loosening issues.

Summary: The C70 makes using a Canon cinema camera on a slider much easier.

The C70 weighs in at 2.58 lbs with no lens or battery. Adding those can easily add 2-3 pounds to the payload. That calls for a gimbal that can handle roughly 5 pounds and handle the boxy nature of the unit.

We decided to see if the DJI RS2 handheld gimbal was up to the task. The RS2 has a published payload of 10 lbs. Theoretically, it should work with a Canon BP-A60 battery and Canon 24-70 f2.8 EF lens.

Before I go any further, I want to talk about my biggest design complaint of the C70, which is the bottom plate screw alignment. 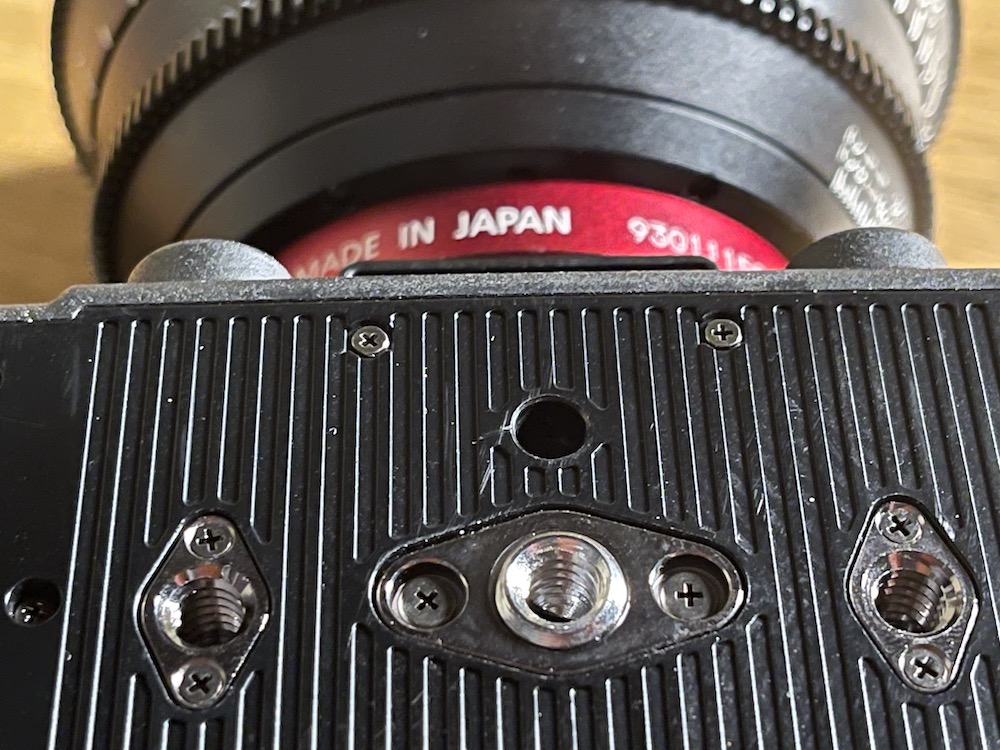 Instead of traditional 1/4” and 3/8” screw holes lined up in axis with the lens, the design engineers decide we needed 3 3/8” holes across the bottom of the camera perpendicular to the lens. What the heck? There is an anti-twist recessed in front of the center hole, but no way to traditionally fasten a plate to the camera to ensure that it does not twist. Again … what the heck? 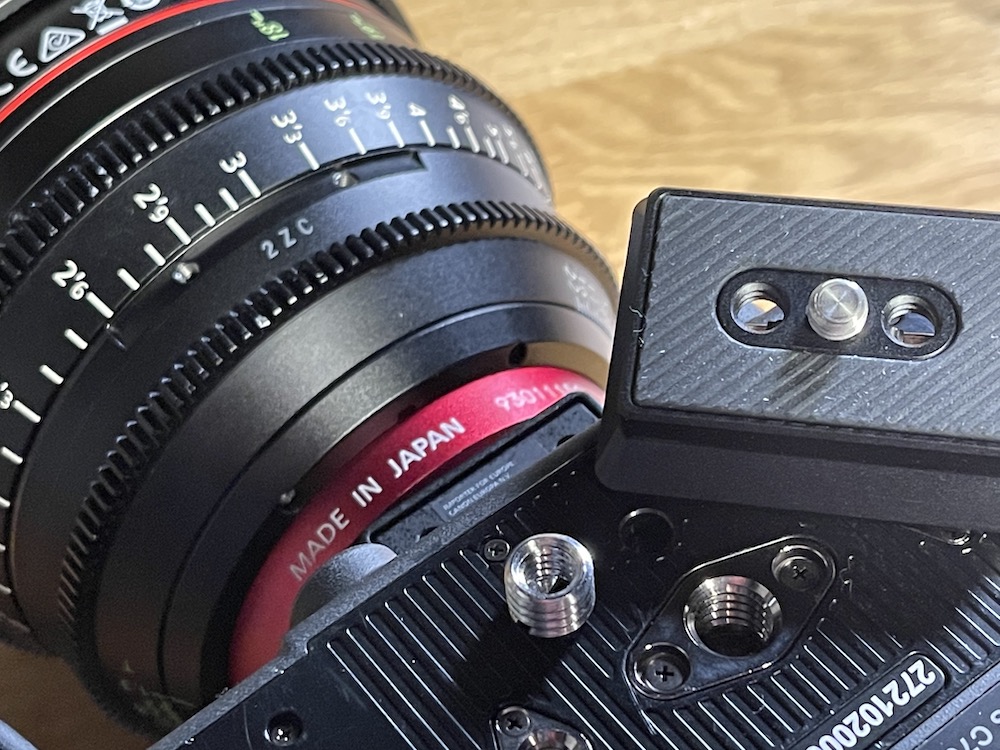 The included camera plate for the RS2 has a 1/4” screw. This design makes attaching to the RS2 impossible without a third party plate or a 1/4” to 3/8” screw adaptor. 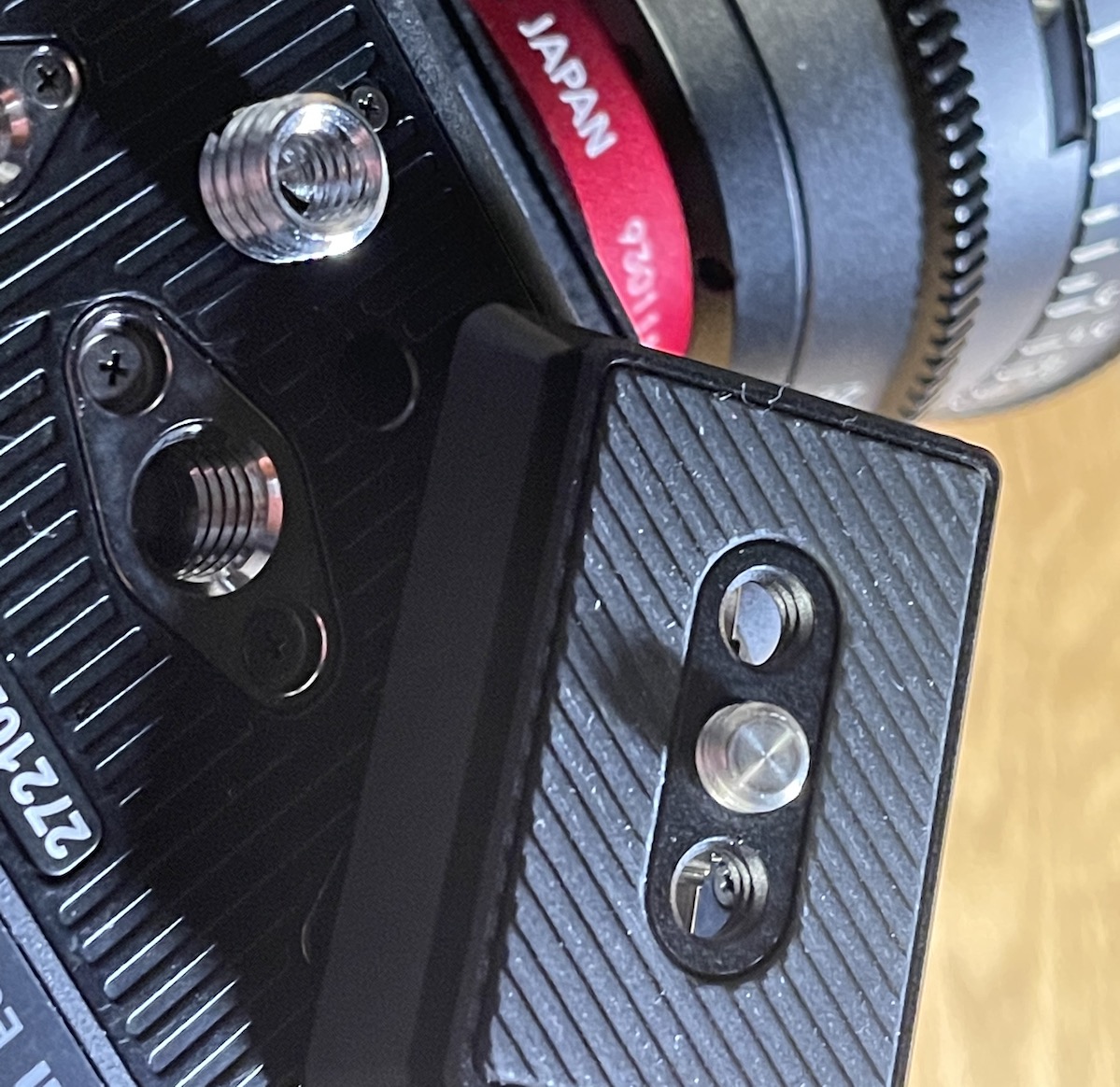 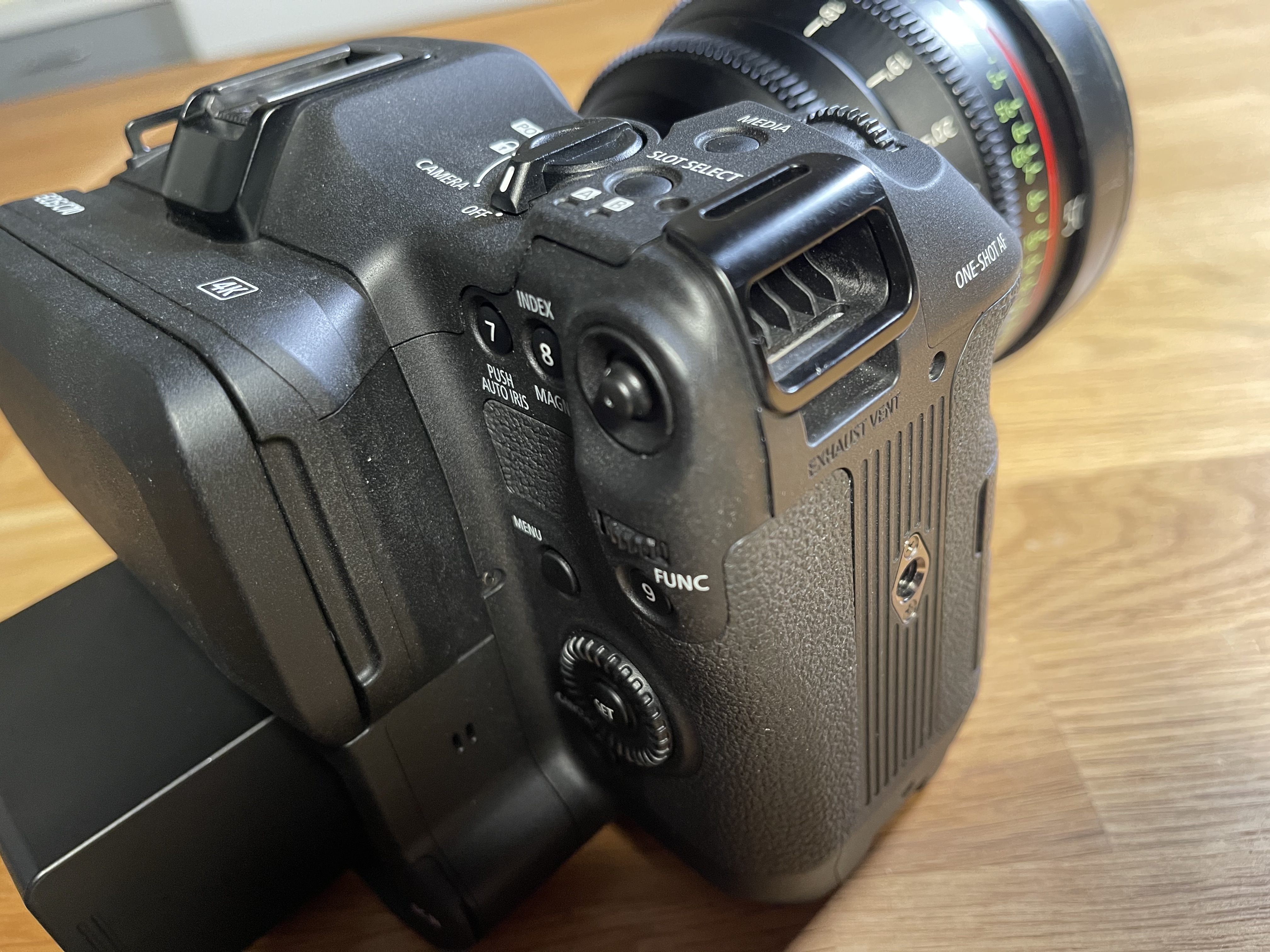 It was fairly simple from that point on to balance the camera on the gimbal. Once we had it positioned and balanced, we cranked up the RS2. 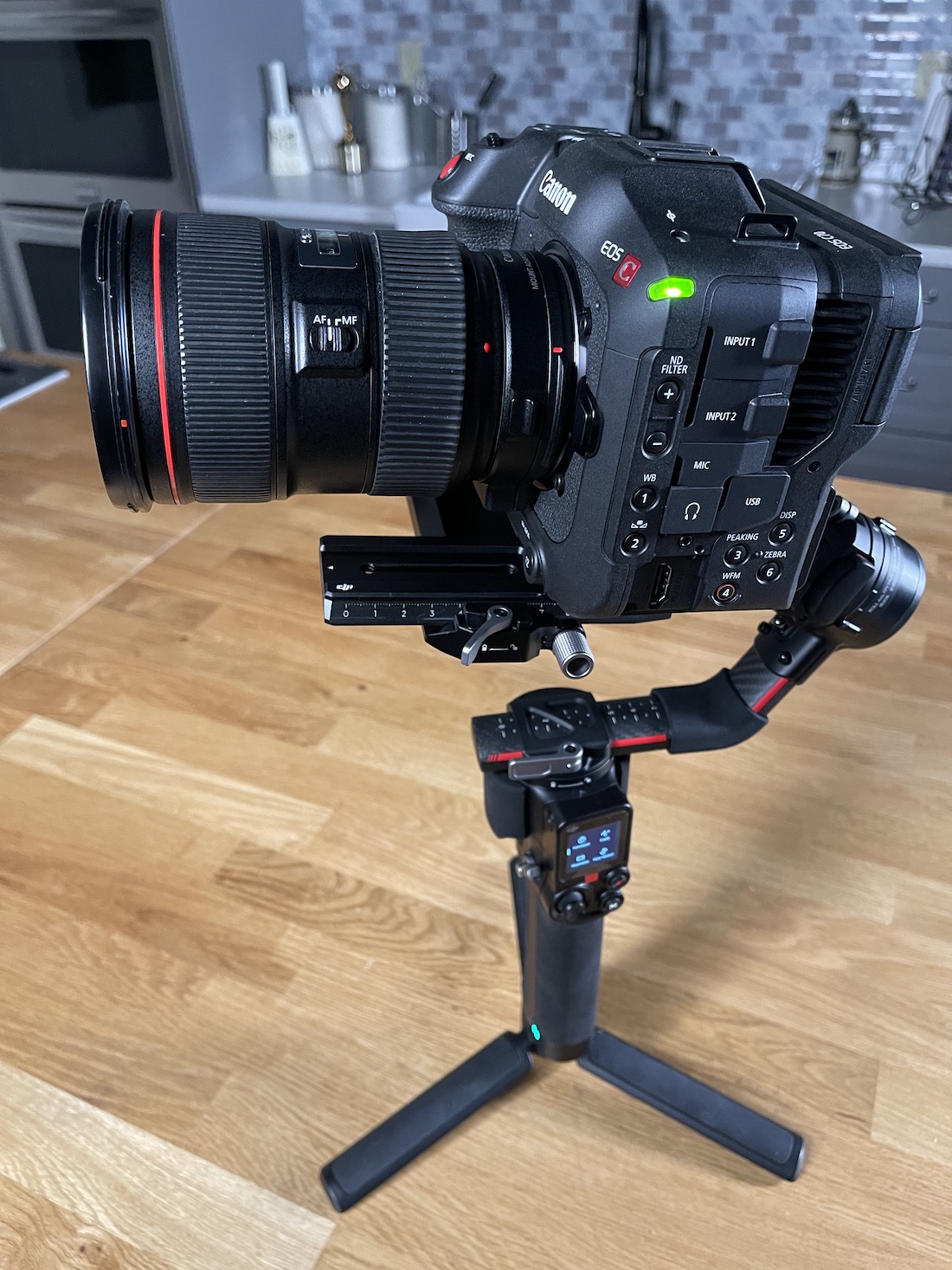 Flying the rig was super smooth. The motors handled the weight fairly easily as long as we had the camera properly balanced prior to turning it on.

The only drawback is the combined weight of lens, camera, battery and gimbal. All told, you are looking at running with a 8-pound rig held at arm’s length. That can get tiring very fast.

Summary: The C70 works on a DJI RS2 gimbal provided you remove the hand strap and get it balanced correctly. The only issue is the combined weight and being able to use it for any length of time.

The Canon version of the “Speedbooster” is almost worth its own article. In short, not only does it adapt the EF to RF mount while retaining native-like control over focus and aperture for Canon glass, it creates a pseudo-full frame field of view while gaining a stop of light sensitivity. 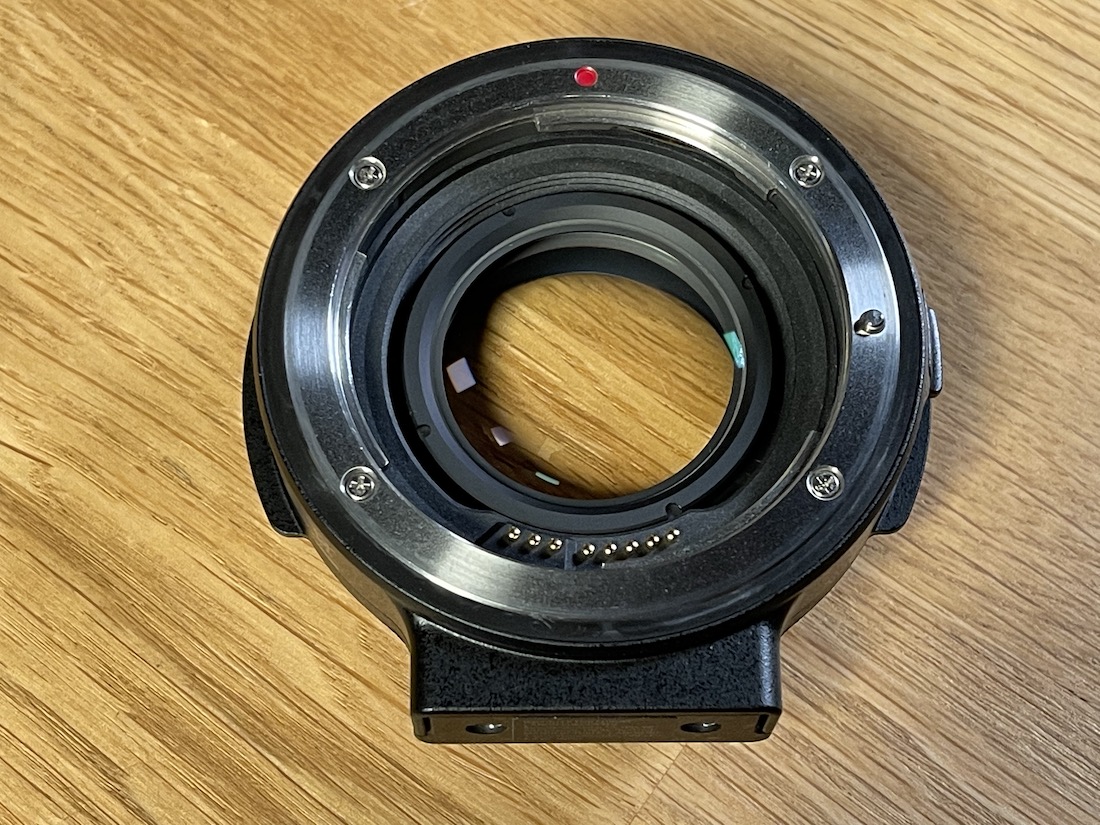 This means you can use the Canon L series of EF glass with the adapter and get very close to a full-frame look on the Super 35 sensor of the C70. Plus, you gain a stop of sensitivity, meaning your f2.8 glass now becomes effectively a f2.0 lens.

The .71 adapter is built specifically for the C70 and only works correctly with a Canon lens. The adaptor even has an extra set of screws and an attachment collar that can securely connect the adapter to the C70 body. 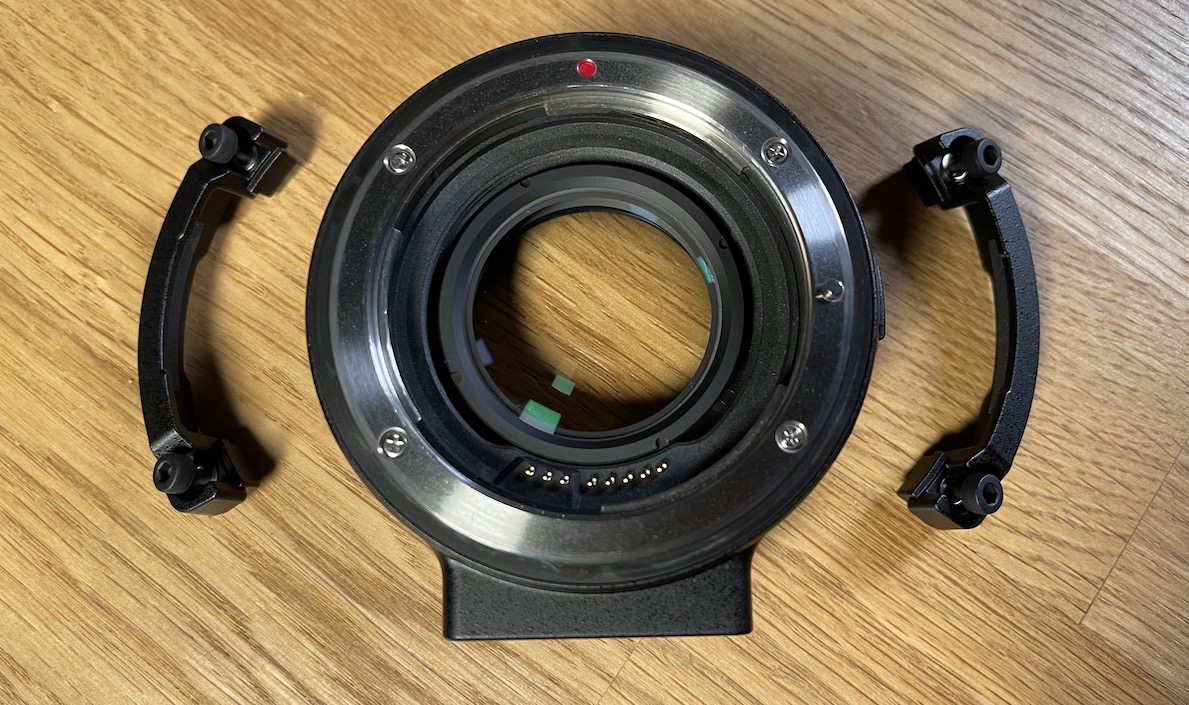 Keep in mind this adapter only works with EF glass and not with an EF-S lens. Crop lenses like the EF-S series have a longer flange that will not fit into the front EF mount. Plus it’s pretty dumb to try to scale down a crop lens through a speed booster onto a crop sensor.

I believe this camera is great for someone wanting to move from a DSLR/mirrorless system to a rig that has built-in ND, XLR inputs (mini-XLRs mind you), great log options (Clog 2 and 3) and matches well with larger cameras twice its price. It’s a great camera for in-house corporate work or any scenario where you need a great image and have access to Canon EF glass.

The number of great cameras under $10,000 today is amazing. Sony has reinvented themselves with the FX line. Blackmagic continues to innovate. And Panasonic still has strong offerings with the S1H/S1/S5 system. The Canon EOS C70 adds to the great variety we have available in the marketplace.

This article was written about gear that we already purchased or already owned. No promotional consideration was provided by Canon.