The new Canon EF-S 35mm F/2.8 MACRO IS STM widens the doors of macro to users of Canon’s APS-C DSLRs, gives videographers a new option and gives them a light to find their subjects.

Compact, lightweight and with built-in LED lights, the new EF-S 35mm F/2.8 MACRO IS STM, is a good choice for videomakers looking for a lens to explore the macro world in moving images. 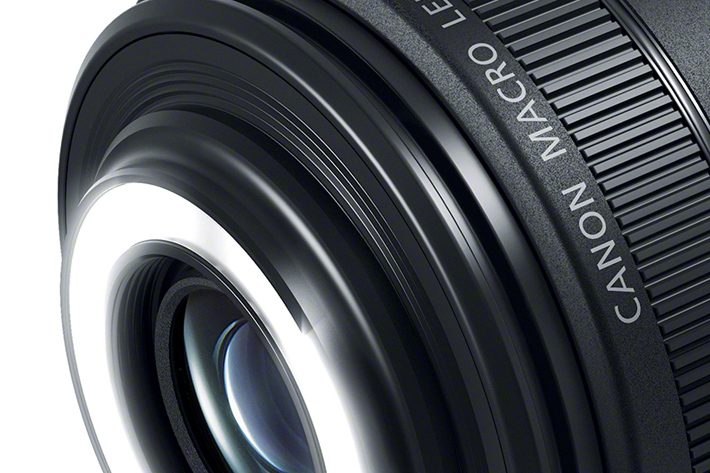 The Canon EF-S 35mm F/2.8 MACRO IS STM had everybody puzzled when the first rumors about it appeared on the web. Because Canon did not decode, then, the M from Macro, everybody thought that a new feature was being introduced on Canon lenses. No one, apparently, linked the M to the Macro now revealed.

The new lens is the widest-angle Macro offering in Canon’s popular EF-S lens series. The lens is designed to help both entry-level and advanced amateur DSLR photographers discover the incredible possibilities of macro photography. Capable of capturing close-up subjects with incredible detail, Canon’s new EF-S macro lens is also the first in the series to feature built-in Macro Lites, as Canon calls the system, that allow users to control lighting with ease.

The use of LED lights on lenses is not new, though. In fact, Canon launched in 2016 the EF-M 28mm f/3.5 Macro IS STM, which was the first wide-angle macro lens with built-in LED lights. The now announced EF-S 35mm f/2.8 Macro IS STM simply continues that logic, offering a new tool to users of Canon’s DSLRs with the  APS-C  sensor format… excluding  the old models, EOS 10D, D30 and D60.

In practical terms and because of the sensor format, the new lens, although being a 35mm focal length, offers a view equivalent to a 56mm in 35mm format (or full frame), meaning this can be considered to work as a 50/60mm macro lens, a value that is not uncommon in the world of macro. So, while it is a wide-angle, it will not open the doors of wide-angle macro to users, although the name may suggest so. The benefit of having this lens is that it is capable of shooting as close as 30mm from the end of the lens to the subject, and offer life-size 1:1 magnification, making it a valuable asset for macro. 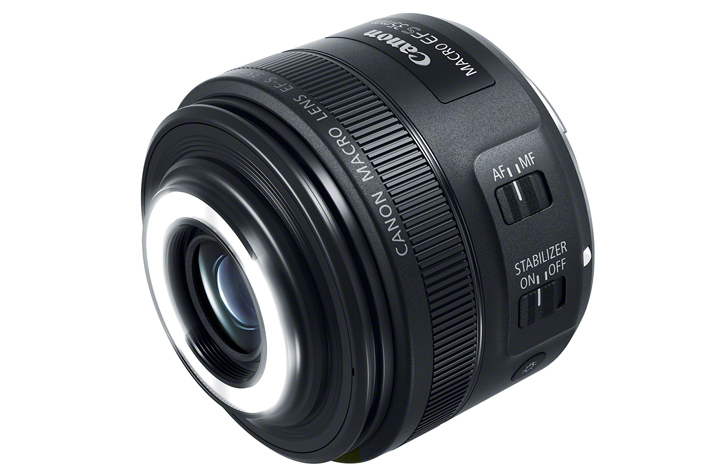 One feature from the Canon EF-M 28mm f/3.5 Macro IS STM that did not make it here, though, is the ability to use a Super Macro Mode, present in that lens, that allows shooting at higher magnifications up to 1.2 times. The lens has the ability to focus on subjects as close as 13mm. Still, the new EF-S 35mm f/2.8 Macro IS STM is a new option that gives APS-C users a new focal length, to add to the “old” EF-S 60mm f/2.8 Macro (which works as a 96mm Macro), which lacks IS and, even more important, the now trendy STM – stepping motor (lead screw-type STM) – which helps provide smooth and quiet focusing operation when taking photos, and smooth and near-silent operation when shooting videos, a feature that is mostly welcome by videographers, even more so when working at close distances and in macro.

The new lens uses  an optical image stabilizer with Hybrid IS,  an enhanced mode of Image Stabilization that Canon introduced in their EF 100mm f/2.8L Macro IS USM lens and also used in the EF-M 28mm f/3.5 Macro IS STM. The sophisticated Hybrid IS compensates for angular and linear movement with built-in technology in the lens, and is especially useful for macro shooting that is prone to exaggerated camera shake often causing unwanted blur.

The included LED lights offer the benefits of a ring light without the need for external accessories. The built-in Macro Lite ensures flexible lighting options and ease for users by allowing photographers to alternate between two lights located on each side of the lens, or both at the same time.  Canon says that “at the press of a button the strength of the lighting can be adjusted to amplify the intricate details of the subject so users can creatively add shadows with depth and texture whilst emphasising the colour and details.” Furthermore, to allow for versatile shooting with natural and off camera light, the design of the attachable lens hood minimises shadows cast onto the subject by the lens, as well as reflections of the lens cast by the subject.

Internally, the lightweight EF-S 35mm f/2.8 Macro IS STM offers a 7 blade circular aperture, which creates beautiful bokeh by rendering out-of-focus areas of a photo smoothly and separating the subject from its surroundings. The lenses are treated with Super Spectra Coating to reduce flare and ghosting, in order to maintain contrast and colour.

Designed as a lens for macro photography, the EF-S 35mm f/2.8 Macro IS STM is a versatile solution that users may  use in many other areas, as portrait, street and general photography. In fact, due to its effective focal length, which is 56mm, it can be used as a “nifty fifty” that performs rather well in both normal photography and macro, something not usual for a 50mm lens. That’s something to consider if you are shooting with a Canon APS-C DSLR and want to have a small kit to go round and still cover all the options. This lens doubles as a real macro and a normal lens. Traveling light gains another meaning with it in your bag.