Covering an event, one photographer, one camera, stills and video is what the Canon 5D Mark II is all about. 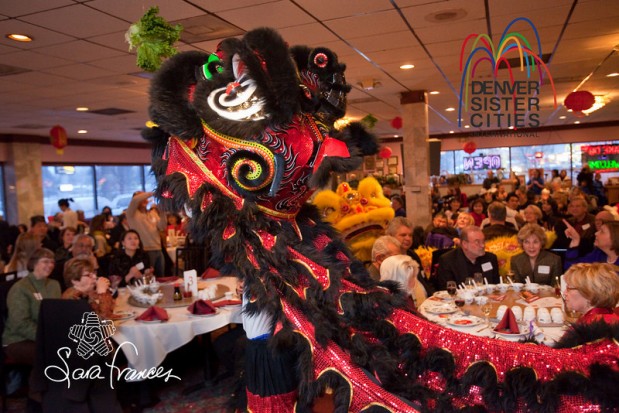 And of course it’s a real boost to have a first class, colorful subject. Sister Cities’ festival dinner for Chinese New Year was a great opportunity to show what this camera can really do.It took a lot of convincing to get the OK to film the traditional dragon dance, drummers, martial arts display and VIPs. Why? Because like a great many non profit organizations, the administration of Denver Sister Cities relies on amateurs to make PR pictures. They all say that they have absolutely no money and that volunteers are “good enough”, especially when those volunteers are long time members and no one wants to offend them. Unfortunately we all know what harm volunteers generally do to the reputation of our profession. I set out to give some serious proof of what good photojournalism can do for an organization. How and why great photos are worth their proverbial weight in gold. A good photographer does not cost money; he or she will make money for any organization.

The fundraising event took place at a restaurant, crowded and low ceilinged. With Zacuto shoulder rig and magnifying hood and a monopod, and just a wide angle zoom, normal and 85mm medium tele lens, I felt equipped. There really wasn’t any place to even stash more gear. The dinner was your usual groups, and of course I used the Ultimate Light Box flash modifier, which worked really easily bouncing off the bright, low ceiling. Lots of great color and detail on ethnic clothing being modeled. And then the performances. My method is to switch back and forth, stills and video. For the video focus I field focus where I know action will take place in advance of going into live mode. With a wide angle I find it’s possible to pull focus yourself as action advances or recedes, because the movement of the standard photo lens is very small. Go for a higher ISO, because the Canon can take it without much noise, and this is a case of needing depth of field. There is so much depth in the scene anyway that the bokeh will take care of itself. The presentation was loud, and I was mostly just about six feet away, using only the on board mic. Good enough for this type of event, though now I use a Sennheiser MKE400.

OK, so after a breathless 3 hours of capture, what to do with the footage to make a legitimate PR piece that the organization could really use? Turning to Animoto was an obvious choice. Since the Canon footage compresses to h264, it drops neatly into Animoto. And since the best use of the camera is for short bursts, the capture fits pretty easily into the 10 second limitation. Believe it or not, Animoto had some copyright free music that worked well with the subject, and meshed well with the live video sound. The best part of the Animoto system is that I can do it all myself without asking for Karl’s computer time in FInal Cut. Presentation at this level would take a fair amount of time in video manipulation – time that non profit clients rarely have budget for. Generally I find the limitation, namely that you have no input whatever for transitions, is surmountable by your arrangement and enhancement of stills, by your choice of music, and setting the right speed of transitions. I do spend a great deal of time in the prep and enhancements, but only infrequently do I decide to re-mix the work.

This finished piece is nice and tight, and has helped to sell commercial jobs.