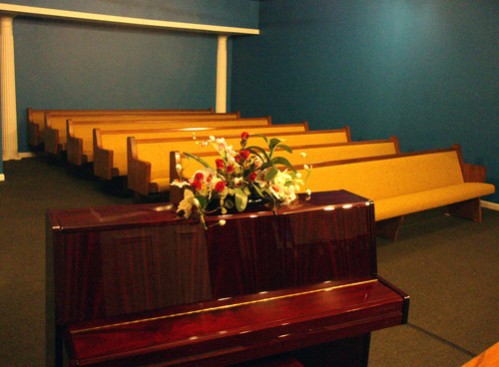 Once Ottis purchased all his equipment, the obvious next step was to set up the studio. One advantage he had over most inexperienced producers was that the old SD equipment in his studio just had to be replaced with the new. However, we are still going to discuss the connections here to make it easier for you to adopt your own set up. In Part 1 of this series we covered taking the time to diagram your signal flow and ideal set up. Here’s when that time spent planning is going to pay off.

First let’s look at the equipment. Here is the bulk of what Ottis purchased to convert the studio to HD:

This is the rest of the equipment that Ottis uses to complement his HD units:

This set up described will work best for a smaller production studio/set up with 3-4 cameras, and a computer for titles or character generation. Ottis has a control room and a green room (also called the front room, the guests in his studio could watch tapings there) in addition to the studio area where the program is shot. Note: This set up will still work well even if you don’t have a separate control room. Another detail to note is that the “Old Fashion Gospel Hour” is pre-taped, edited in Vegas 9.0 then distributed to the TV station on a Blu-Ray DVD. A live shoot may be set up differently (regarding your camera set and you may be using a lap top computer) but the hook-ups will generally be the same.

You may be wondering at this point how hard it may be to learn to run an HD set-up if you’ve been using standard definition for awhile. Ottis found that learning to use all the equipment was surprisingly easy. It’s mostly terminology that you may have to familiarize yourself with. Most of Ottis’s questions were answered either by Datavideo customer service or simple Google searches. If all else fails, read the instructions!

Step 1: Cameras to the Switcher

Since Ottis’s cameras were HDMI and the SE-2000 uses HD-SDI inputs (among others see links at the bottom of the article), he used the Datavideo DAC-9 Converters to convert his HDMI signal to HD-SDI (see above). He then connected an HDMI cable into the DAC-9s then connected those via BNC cable to the switcher. All three inputs were then monitored one of his View Sonic VS13223 HD monitors. The SE-2000 internally generates a multi-view preview screen for all inputs as well the program out, so you can see in real time what your production looks like for broadcast: 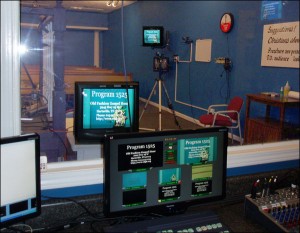 Notice how Ottis how Ottis has several monitors set up. The one on the far right of the picture mounted on the wall is for the camera men on the in the studio with the preacher and singers. Those monitors help the camera men see everything, what’s going on in the studio as well as what they are taping. This is not always necessary but a good idea if you can implement it. There is a monitor ( (13inch TVs) in for the preacher/choir with lead ins and cues. Creating a monitoring system early on will help your team synchronize better.

Connect your computer to the DVI-D in on the SE-2000 switcher. In this case Ottis was using a PC, but you can also connect a Mac system with no issue. Just make sure your DVI-D adaptors from the computer to the switcher are the appropriate ones for your computer model. Make sure that both units are off when connecting them.

After connecting them, turn the switcher on first, then the computer. This will ensure each unit recognizes the other properly.

If you connect and do not see an image in one of the preview screens, there are several things that could be happening:

Step 3: Switcher to the HD recorder
Ottis used the Datavideo HDR-40 as his main switcher output recorder but he also recorded output from the switcher on to his SD recorders as a backup. He converted one of the outs (SE-2000 output is HD) to his AV Tool converter. 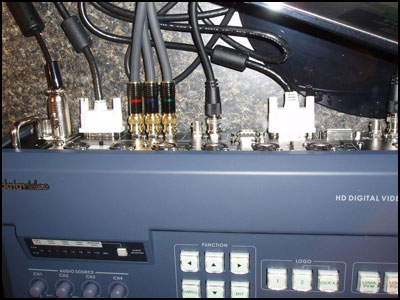 Connecting to the HDR-40:
Via 1 BNC cable, Ottis connected the HD-SDI out to the HDR-40’s HD-SDI in. Fairly simple. To make sure that unit was recording, he also attached one of his ViewSonic Monitors to the HDR-40 using the HMDI out to see what the recorded footage.

Connecting to the HD to S-Video Converter:
Via the HD Component (YUV) out on the SE-2000, Ottis connected to the AV Tool Converter, then from the converter to the S-Video Distribution Amp

Step 4: Audio (HD Recorder to the monitor and Audio dist amp. Audio to Distribution Amp, Recorders, and computer monitor.Please note that this set up may differ from what your production needs, so make sure to research what would work best in your situation) 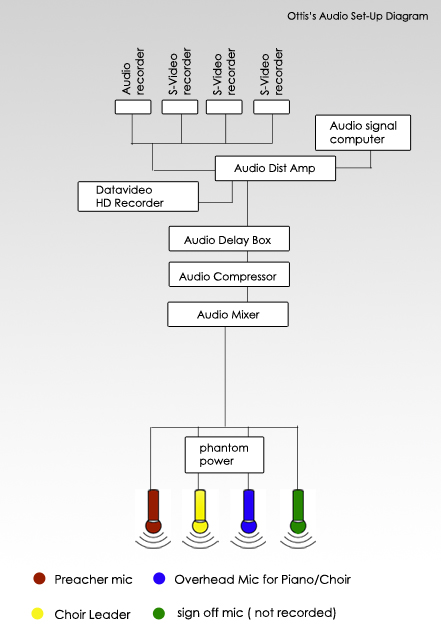 Recording Audio for your video can be tricky if you have more than one sound source. Ottis had mapped out how ne needed his audio beforehand, so when it came to connecting the audio it was as simple as following the map to connect everything. You may not have as many audio sources as Ottis, but its still a good idea to figure out how you are going to get your sound. You also have to consider audio delay, which occurs because video and audio are recorded at different rates. That is why its also important to check for audio sync when recording audio separately.

So let’s look at the set up:
Mics: Notice that 2 mics are connected to Phantom Power. Phantom power gives power to the mics and amplifies the sound source without overloading signal. This is ideal in this case because Ottis wanted to pick a good signal from the singers without turning up the mics. Turning up the mic could result in “dirty” sound that might be hard to work with.

Audio Mixer, Compressor, Delay Box:
The mixer “combines” all the sound sources, and also creates a way for you control the audio levels that are being recorded.

The compressor “normalizes” the combined audio signal, bringing it up to the highest decibel level without overloading the signal.

The delay box matches the rates that the audio and video are being recorded at so that you do not have sync loss.

Audio Distribution Amp:
Because Ottis is recording his audio to several different locations, the distribution amp keeps the audio signals at high quality. The quality of the audio will degrade as the signal is being split, so the unit essentially keeps that from happening. Most times you won’t need one of these unless you are sending audio signal to several devices.

Audio Signal Computer:
Ottis wanted a clear indication of what his audio signal looked like in sound wave form so he monitored it with software.

The software that he used was Audacity, which is available for free download in Mac or PC formats.

Make sure to run several tests to make sure that all your signals are traveling where you want them to, and also that all your signals are at the quality that you would like. Depending on your needs, you may not need as many audio components as Ottis, but its good to know what can help your audio to sound the best it can, since you are also producing Hi quality Video.