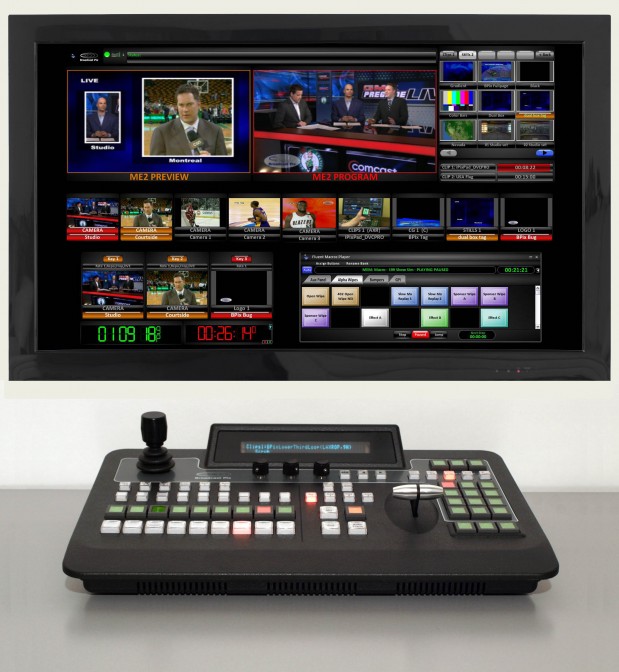 “Slate V8 is all about giving Broadcast Pix customers more,” said Ken Swanton, President, Broadcast Pix. “We’ve improved our Fluent workflow tools to make it easier than ever to produce compelling live video cost effectively. Plus, we’ve partnered with Telemetrics and ViewCast to make Slate V8 the most versatile and powerful live video production system on the market.”

Slate’s Fluent Multi-View, which goes beyond conventional multi-views by including monitors of files and keys, has an updated look that is easier to read and customize. Any element can now be resized, colors can be changed for window borders and backgrounds, and new alignment tools make it easy to optimize across as many as four monitors. A new scaling feature increases the size of on-screen text when displayed on a large wall monitor. New streamlined menus make setup faster than ever.

Other Fluent workflow tools have been improved as well. The Fluent Clip Store can now play two HD clips at once, one from each channel. New three-point loops enable animations to enter and then loop. Fluent Macros can now create even better virtual sets by tying cameras to graphic or clip backgrounds and changing them live on air. And Macros can now recall snapshots that include files, even when the file store is remapped on the switcher.

A new software option for V8 enables Slate to control the full line of Telemetrics camera pan/tilt heads and robotic equipment, including pedestals and tracks. Broadcast Pix can control Telemetrics equipment on its own and in combination with both Telemetrics Studio Control Software applications. Telemetrics will also demonstrate the interface at its NAB booth (C8525).

“We consider the Broadcast Pix product to be an impressive and efficient production tool,” said Anthony Cuomo, Vice President and General Manager, Telemetrics. “We are also excited about the capability Telemetrics robotics adds to the system in more critical robotics applications where additional performance and features are desired. We believe the cost savings to the customer will be substantial.”

Another new software option for Slate V8 allows users to control ViewCast streaming appliances from a Slate control panel. Up to 12 streams in a variety of streaming formats, can be controlled and monitored from the Slate, including MPEG, Flash, AVI, Real, and WM2. Control can be integrated into Fluent Macros, and the streamer can be remote as control is over a TCP/IP network.

According to Dave Stoner, President and CEO of ViewCast, “The combined capabilities of Broadcast Pix and ViewCast create a very compelling solution for producing and delivering live video to the Web and mobile devices. Broadcast Pix has taken advantage of ViewCast’s Web services management platform to deliver an integrated solution for our mutual customers, enabling them to automate content encoding in the wide variety of formats supported by our Niagara encoding appliances.”

About Broadcast Pix Broadcast Pix is the leader in integrated live video production systems. Its Slate systems create compelling live video, and they run unique Fluent software that provides a file-based workflow that streamlines production and improves functionality. With its integrated switcher, multi-view, CG, clip and graphic stores, and aspect and format conversion, Slate is a fraction of the cost of a control room to buy, staff and operate. Slate is future-proof, as it is upgradeable to 3G 1080p. Broadcast Pix is based in Massachusetts, with distributors worldwide. Customers include leading broadcast, webcast, podcast, cable, entertainment, mobile, corporate, education, religious, and government studios in over 70 countries. For more information, go to www.broadcastpix.com.