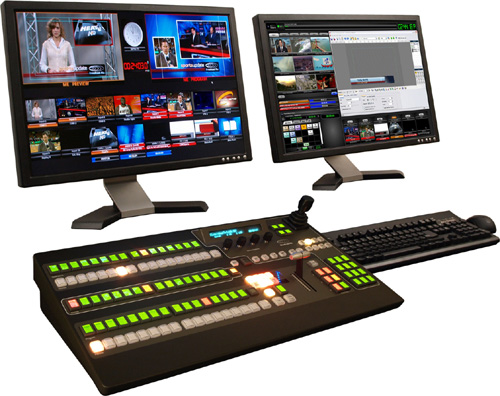 Both control panels provide faster access to all of Granite’s video and file-based content, which is provided by the only production switcher with an integrated server. The new panels, combined with Granite’s Fluent™ file-based workflow software, enable a single operator or small team to create highly compelling live video for broadcasts, webcasts, events, and other productions.

“Granite provides so much power to combine live video and file-based content that we just had to bring out some larger panels to access it all,” said Ken Swanton, president of Broadcast Pix. “No other switcher control panels enable a single operator to create such amazing live video.”

The Granite 2000 control panel provides a much larger work area than the popular Granite 1000, which is still available for small studios and production trucks that need a more compact system. The new Granite 2000 expands the number of input buttons from nine to 16 (and reaches 32 with shift), doubles the number of keyer buttons from three to six, and increases auxiliary output buttons from two to 10. It also adds key priority controls, as well as mnemonics to display auxiliary output assignments.

It also adds more device controls to provide faster access to the full complement of Granite’s built-in Fluent file stores for clips, animations, and graphics (including ones from the built-in CG), as well as controls for external devices like robotic cameras, audio mixers, video streamers, and video servers. Plus, it adds a dedicated bank of controls for Fluent™ Macros, the industry’s only file-based macros, to create powerful effects.

The enhanced Granite 5000 control panel adds the new features that debuted on the Granite 2000, including dedicated Fluent Macros buttons, control of all aux outputs, and key priority controls for each M/E. In addition, the new Granite 5000 panel includes additional capabilities for the new bank of Fluent Macros controls.

Both new panels also feature patented PixButtons™ for every input, key, and content library. PixButtons enable operators to switch both video and file-based content with confidence, because they dynamically display the file names on the buttons.

The Granite 2000 is priced at $34,995, complete with wide control panel, 3 RU switcher, 2 RU server, Fluent workflow software, clip store, animation and graphic stores, Harris CG, and multi-view support for two monitors (expandable to four). The new Granite 5000 control panel replaces the previous 2 M/E control panel at no additional cost. The Granite family also includes the Granite 1000 with a compact 1 M/E panel and the Granite 100, which can be controlled from a touch-screen, mouse, keyboard, or Apple iPad app ($9.95 download).

About Broadcast Pix Broadcast Pix is the leader in integrated live video production systems. Its Granite™ native HD systems are the only switchers with a server to provide the best file-based workflow. Its Slate™ systems create highly affordable hybrid HD/SD/analog productions. Both systems create compelling live video by integrating a production switcher with a suite of Fluent™ file-based software tools, including clip and graphic stores, CG, multi-view, watch-folders and macros. Broadcast Pix systems are a fraction of the cost of a conventional control room to buy, staff and operate. Customers include leading broadcast, webcast, entertainment, mobile, corporate, education, religious, and government studios in more than 80 countries. Learn more and watch a video demo of Granite at www.broadcastpix.com.