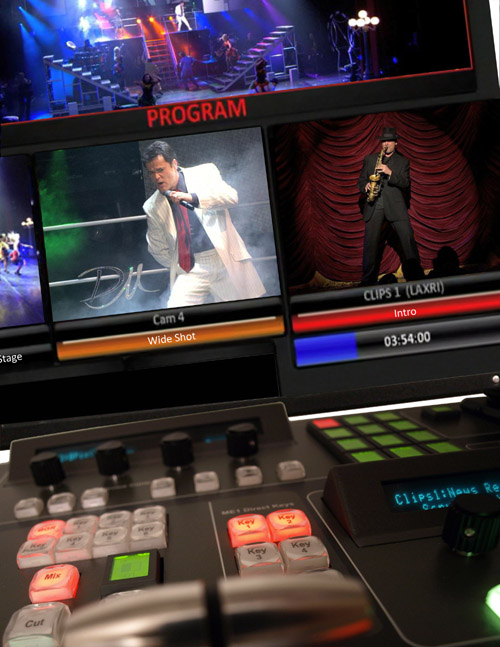 “The new Fluent Clip Store is an important milestone for Broadcast Pix,” explained Ken Swanton, president of Broadcast Pix. “Some switchers in the industry feature limited storage for basic animations, but no other company offers a production switcher with a true clip store. With Granite Version 1.3, we are delivering HD clip and animation playback with stereo audio through our unique integrated content server.”

Fluent Clip Store is so well integrated into the Granite workflow that clips can be instantly accessed from the control panel with file names displayed on the PixButtons. In Fluent Multi-View, clip thumbnails appear along with file names and metadata, while active clips play in real time and display a clip counter. Clips are easily imported to Granite using Fluent Watch-Folders and begin playing automatically on the transition to air.

“Having a feature like the HD clip player is what makes the Broadcast Pix Granite system the obvious choice for the live events industry,” said concert producer Simon Graves, who used a Granite 5000 system last month for the production of Donny & Marie: A Broadway Christmas in New York City.

Through Fluent Macros, the industry’s first file-based switcher macro memory system, clips can be combined easily with switcher moves and graphics file recalls, as well as control of robotic cameras and audio mixers. The only switcher with a built-in content server, Granite can store up to 2 TB of clips, animations, and graphics, and can be ordered in a RAID array for redundancy and additional reliability.

Version 1.3 also provides stereo audio output for the new Fluent Clip Store and Granite’s existing Fluent Animation Store through XLR connectors in the rear of the Granite system. Granite’s dedicated Fluent Animation Store is ideal for animated backgrounds, logos, or transitions. Animations can be created on the built-in Inscriber CG or uploaded from external programs such as Adobe After Effects.

Granite Version 1.3 is available now for 50 and 60Hz Granite installations worldwide as a free download at www.broadcastpix.com. To see a short video demonstration of Granite, please visit http://www.youtube.com/watch?v=zxd4mBIz5d8.

About Broadcast Pix
Broadcast Pix is the leader in live video production systems. Its Granite native HD systems are the only switchers with a content server, to provide the best file-based workflow for clips and graphics. Its Slate systems create highly affordable hybrid HD/SD/analog productions. Both systems create compelling live video by integrating a production switcher with a suite of Fluent file-based software tools, including clip and graphic stores, CG, multi-view, watch-folders and macros. Broadcast Pix systems are a fraction of the cost of a conventional control room to buy, staff and operate. Customers include leading broadcast, webcast, entertainment, mobile, corporate, education, religious, and government studios in more than 75 countries. Learn more at www.broadcastpix.com.