Blend white balance for the right effect in night shots. 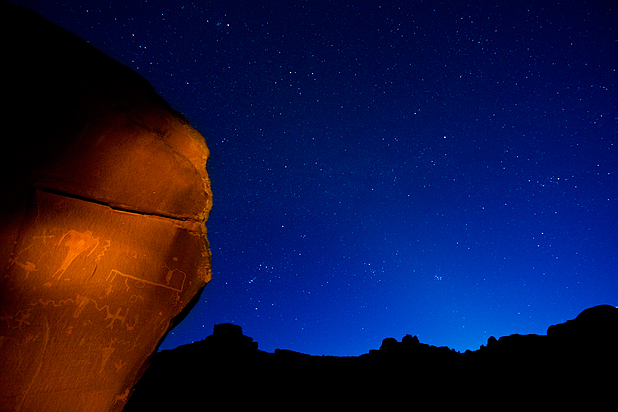 Star trails and night photography used to be one of my favorite activities with film shooting. I’d go out on a moonless night and set up a star trail image, often times leaving the shutter open for more than an hour. Then I entered the digital age and quickly realized star trails didn’t work. A hour long exposure on my early digital camera looked like a speckled piece of sandpaper, noise permeated the shot. But then digital cameras got better. And better. Now I shoot a Nikon D3s with a larger sensor, and I get results similar to shooting film.

A few things are important to get the most out of a long exposure image. First, if your camera has long exposure noise reduction, turn it on. This will greatly improve the final results in your image. With long exposure noise reduction turned on your camera will process the shot as long as the initial exposure. So if you shoot a one hour shot, the camera will process the image for an hour, resulting in two hour capture/processing time. Remember to make sure you have fresh batteries.

Another trick I often do with my night time shots is light paint a part of the foreground with the stars in the background. With the image here I used a small penlight to illuminate the rock. In Photoshop I processed the raw file once with a white balance of 3200 Kelvin to make the sky very blue, and processed another image at 5500 Kelvin to make the rock warm orange. I then placed the cool blue sky shot on top of the warm rock image, added a mask, and brushed in the warm rock from the bottom layer to reveal the rock in the cool blue sky. Instead of star trails I shot a fast high ISO image. 20 second exposure at F4, ISO 3200 shot on a Nikon D3s.