Is the URSA Viewfinder necessary for URSA and URSA Mini shooters? 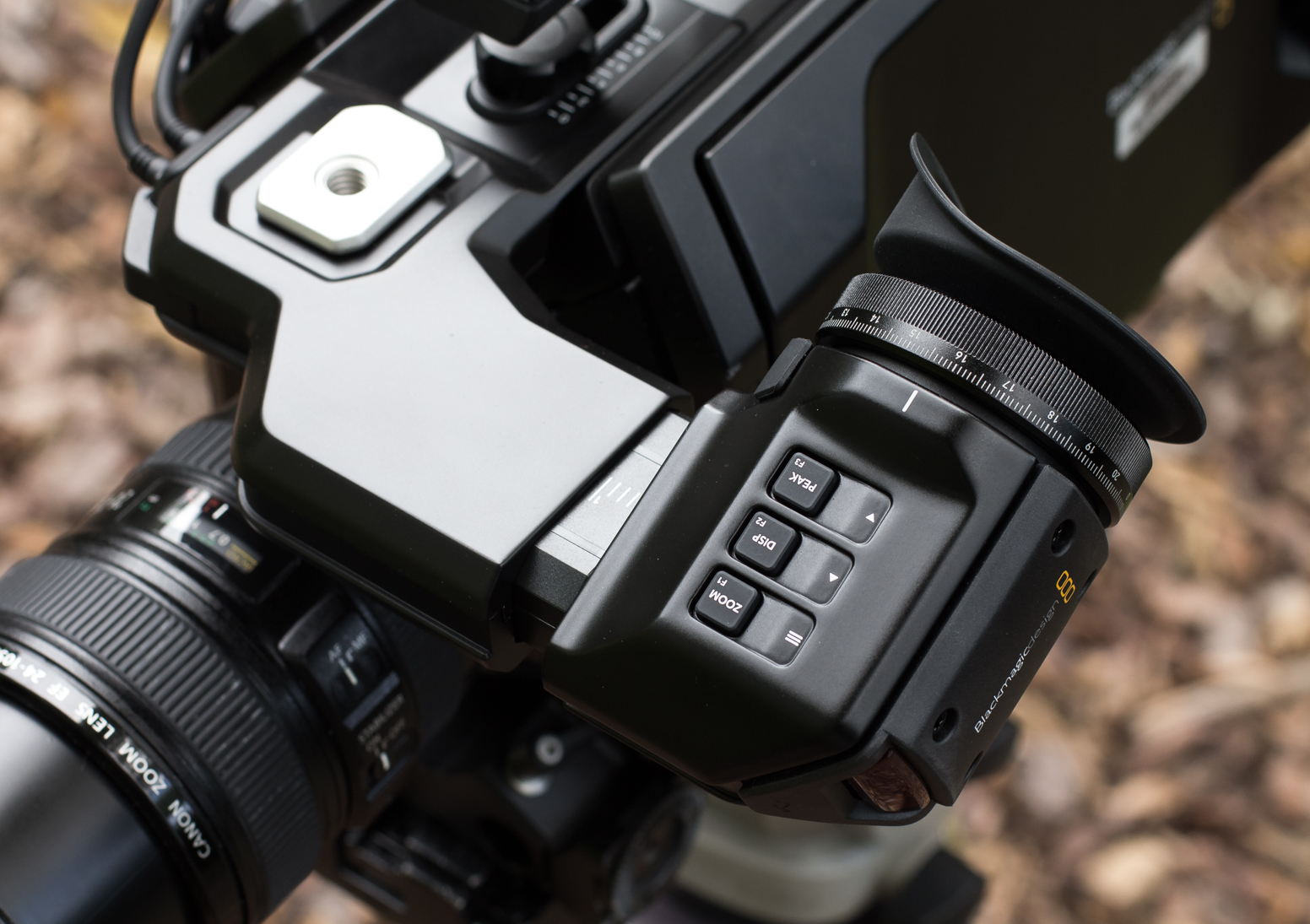 Do you know what frustrates me? Rigging up a camera to make it ready to shoot. What I find especially annoying is trying to get an EVF straight and in the right place on your camera to make it comfortable. Inevitably, the pitch on the EVF is off and you’re head ends up in the wrong position; turned too left or right, or worst you’re looking up into the EVF. This leaves your left eye staring into space and now you’re unable to see the world outside what the camera sees. This leaves a camera operator even more blind to his/her surroundings. If I don’t have to rig up another EVF in my life I’d be pretty happy.

The URSA EVF gets this process right in the easiest possible way. One simply slips the URSA EVF into the well built top of the camera. The top of the URSA has a metal lip securing the up and down movement of the EVF mount. Then you choose how far forward or backward you want the EVF and tighten down the top thumbscrew. Next position the EVF eye piece left or right so operating the camera is comfortable. Then tighten down the right thumb screw underneath the EVF. Lastly, choose your vertical angle most comfortable and tighten down the left thumbscrew under the EVF. And you are done. You have a very solid connection to the camera and operating the camera couldn’t be any more comfortable. Clearly BMD designed this accessory right off the bat when they designed the URSA. The fit is too perfect for the EVF to be an after thought. 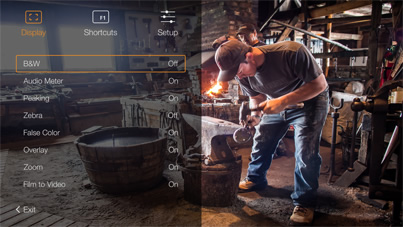 The URSA Viewfinder is a feature rich EVF which rivals the much more expensive EVFS on the market today. With the URSA EVF you get a high resolution 1920 x 1080 color OLED display, precision glass optics, adjustable diopter, and built in digital focus chart so you can ensure what you’re seeing in the viewfinder is in focus. To preserve the OLED screen life Blackmagic included a built-in sensor under the eye cup that turns on the OLED EVF when you’re looking into the viewfinder.

One of the thing I’ve noticed with other EVFs is how digital or electronic the image looks inside the EVF. With Blackmagic’s 1080 OLED screen I didn’t have that problem. The image is clear, has great contrast, and there is no lagging behind what the camera sees.  When I pan the camera, the URSA Viewfinder sees exactly what the camera sees at the moment in time. No delay. This is a nice detail and will help alleviate “over-steer” when shooting.

The Focus chart inside the EVF is a smart addition by Blackmagic. I remember my old news days when you could focus the diopter, but you never really knew if it was your eyes or if the diopter focus was off a touch. With the focus chart in the URSA viewfinder there is no more guessing. The EVF is either focused for your eyes or it is not. This is one of my top five favorite features found within the URSA Viewfinder.

The Film to Video, or seeing the Rec 709 LUT instead of shooting raw and monitoring the image in “Film” look. When I used an EVF with my Cinema Camera I had to view the “Film” look if I was shooting raw because that EVF, like many at the time, did not have the ability to upload a look up table. Plus, the Cinema Camera only sent out a “Film” look over the SDI. The URSA Viewfinder can have the same video look assigned to the 10″ screen. This makes it easy to see what you’re recording, and even easier to nail focus. Will it be able to upload different LUTs in the future? I hope to see it as an option, but I wouldn’t bet on it.

False Color.This is one of the smartest features found on the URSA Viewfinder. The exposure meter Blackmagic includes on their cameras is a broad stroke kind of meter. It, however, lacks the fine detail found in some other historgrams. The false color setting helps to alleviate this problem. With the quick tape of a button one can see where you’re falling with exposure: middle gray shows up as green and skin tones show up as pink. Peaked highlights fall yellow then red, and under exposed parts of the frame show up as purple and blue.

X 2 Zoom. This is adequate. Could it be better? Of course. But, I don’t see Blackmagic putting a joystick on a camera to move the zoomed in area. For me, when shooting, I’m not a huge fane of moving a zoomed in box to what I want to focus on. It takes too long. I just pan or tilt and move on.  The peaking on the URSA and URSA Mini is a nice bright green and easy to see. Bonus, the peaking does not effect the overlays. Some after market EVFs focus peaking also peaks the overlays making them hard to read.

Meters! Audio meters are a must. Thankfully the ones on the URSA Viewfinder work as expected and are not in the way of the image. 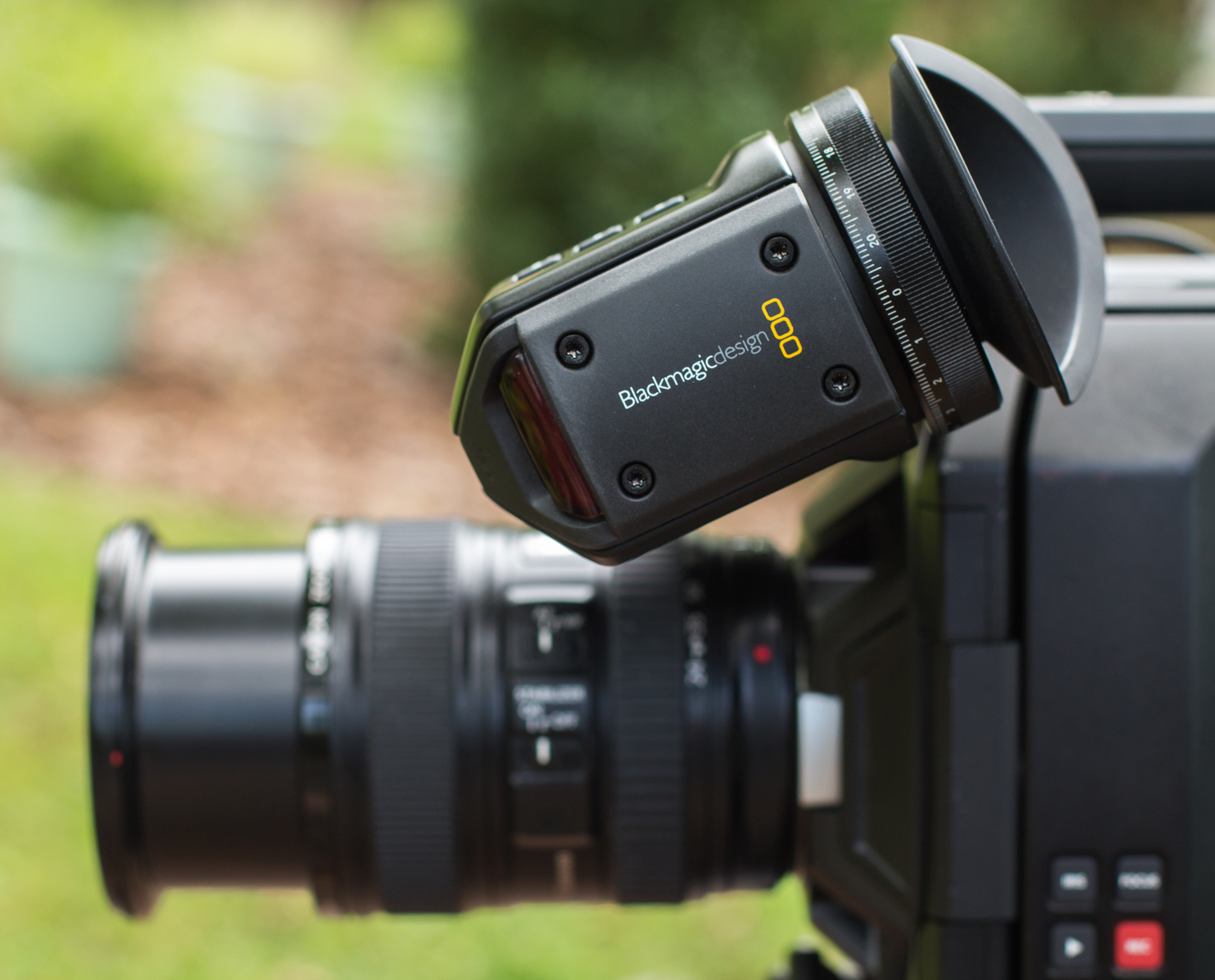 WILL IT WORK WITH OTHER CAMERAS

It can, but my initial thought is this, it’s not a good idea. The URSA Viewfinder is built specifically for the URSA and the URSA Mini, but will an enterprising camera accessory manufacturer build an adapter, maybe. I can see this viewfinder, with a price less expensive than other feature rich EVFS, becoming an often requested piece of gear.  There is a problem though, with no way to input other LUTs and many of the EVF’s features specific to the URSA, I can’t really see the URSA Viewfinder finding a place on other cameras.  Many of the features will not translate, and I don’t see Blackmagic getting into the camera accessory game for any other camera manufacturer.

I’ve been using the EVF since the day it arrived. It has been attached to my URSA and not been removed. There’s no reason to remove it. This EVF should live on the URSA. It’s the best way to shoot outside with this camera. I’ll say it again, if you’re thinking about the URSA or URSA Mini then the URSA Viewfinder is a must. Hands down it is the best EVF option for these cameras. 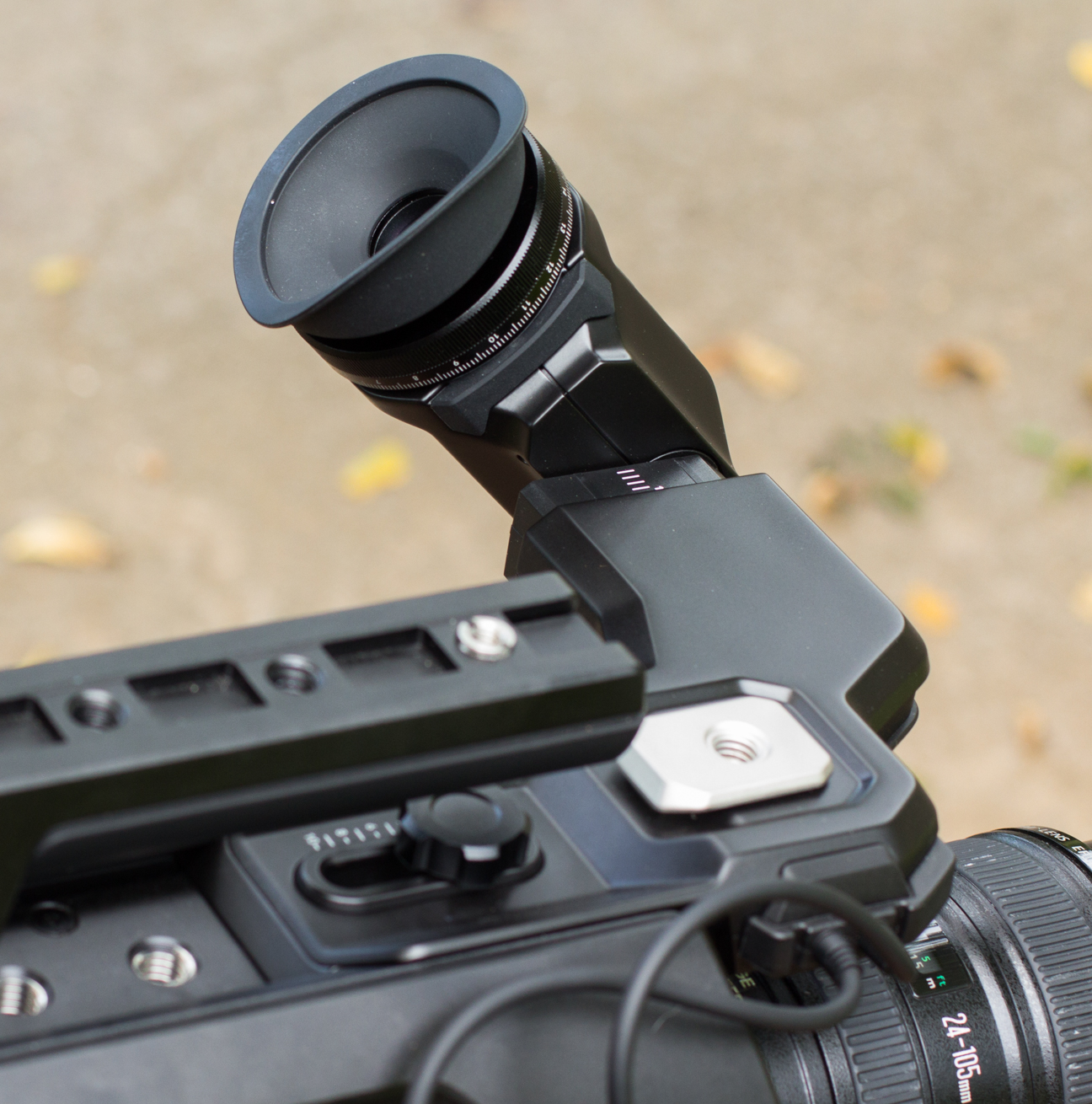