A huge new cloud-focused update across the Blackmagic post-production lineup is ready for NAB 2022 and to push BMD ahead of the competition.

Blackmagic Design CEO Grant Petty unleashed a tsunami of new products and announcements with the Resolve Cloud update event. Hardware, software, cloud collaboration and more were on the agenda with this update ahead of the 2022 NAB show next week. Some products are available now, some will be released soon and others will gain more functionality over the coming weeks and months.

You can view the nearly two-hour event below.

There’s so much to cover here I’ll only be able to comment on a few of them but will paste in some of the bullet points and main features of these new products. 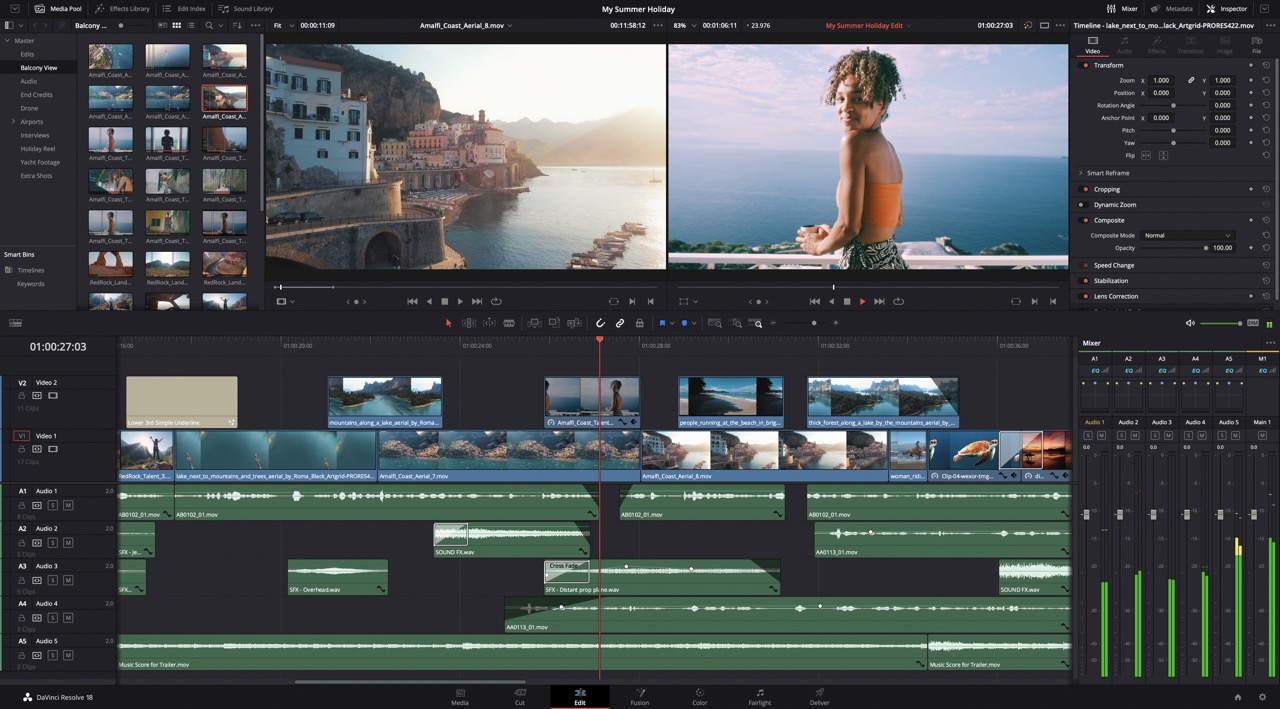 Resolve 18 is available in a public beta and gets a lot of new features, especially in the Color and the Fairlight pages. I felt like the Edit page might not have gotten all the love some of us editors might have hoped for but other parts of the app sure did. This was my initial thought while watching the presentation:

Indeed, the object tracker is what Rotobrush always wanted to be. I’m impressed.

But when you look over the bullet point features there is a lot there across the application. I’m excited about the attention that seems to have been paid to proxy workflows. That’s a by-product of the new cloud and collaboration features but it can be a benefit to editors everywhere.

Features marked with * are in progress and may change before the final release.

DaVinci Resolve 18 has the ability to automatically map and manage paths between users and machines using cloud based project libraries. This ability is enabled by default in the project settings.

Once the first user adds media to a project, every additional user or machine only needs to perform a relink to their shared copy of the media. DaVinci Resolve will automatically map these paths so that the media does not go offline for other users.

Users can also manually manage shared locations between users and machines. In order to do this, the first user adds a shared media location to the project settings. This could be a shared cloud folder using a service such as Dropbox or Google Drive. Every additional user can then either just relink their footage, or open project settings and set their local path to that media location.

Systems with NVIDIA GPUs can livestream the reference output. There is a new “Blackmagic Remote Monitoring” app that installs with Resolve which will connect and output to a decklink. More in the release notes, but im testing it now and it works great. pic.twitter.com/zshOujspLp

You can assign one or multiple watch folders to the Proxy Generator. The Proxy Generator app will scan and automatically generate QuickTime proxies with the selected codec in a Proxy subfolder.

When importing media into DaVinci Resolve, any proxies found in these subfolders are automatically linked and assigned as proxies in the media pool. This happens even if the proxies are generated after importing the media to the media pool.

DaVinci Resolve 18 allows the user ability to prefer proxies or prefer camera originals. Depending on the setting chosen in the Playback menu, the selected clip type will be prioritized if both proxies and originals are available.

From the effects library in color page, you can apply Depth Map to a node, enable Depth Map Preview to view results, adjust limits, isolate specific depths and finesse results.

You can also disable preview, enable OFX alpha and use the alpha output in subsequent nodes.

The new Resolve FX Surface Tracker in DaVinci Resolve Studio applies textures or effects to flexible and deformable moving surfaces. If the texture you would like to apply has transparency, you should drag the plugin as an FX node rather than apply it on a corrector node.

The ultra beauty mode, now the default setting for Resolve FX Beauty allows for stronger filtering and more natural results. This more powerful effect can even help with smoothing object surfaces, and even some compression artifacts.

Older fixed bus projects can be converted to FlexBus projects by unchecking the use fixed bus mapping control in project settings under Fairlight.

This action permanently converts the project’s timelines to FlexBus and cannot be undone.

Ordering tracks and buses from the track index

You can now drag and drop tracks and buses to freely change order in the track index. This order will be reflected in the meters, mixers and the fader panels.

You can choose between a single scrollable view or a split view with a fixed section, indicated by an adjustable split point.

From the Project Settings, under Fairlight, you can select IEC 60268-18, Digital VU, or define your own custom levels, scale and decay.

Improved plugin management in the mixer

You can now copy settings for pan, EQ, dynamics and third party plugins between tracks and buses in the mixer.

This can be invoked in multiple ways:

The automatic detection of installed Python versions for scripting has been updated to check for default installations for Python 3.3 to 3.10 (and future versions).

If set, the PYTHONHOME environment variable (or the explicit PYTHON3HOME and PYTHON2HOME if you have both installed) will be considered. To explicitly override the version used by DaVinci Resolve and Fusion Studio, you can set FUSION_Python3_Home (formerly FUSION_Python36_Home) to point to the base folder.

In addition to common expressions, the Custom Poly supports these functions and variables:

Support for 10-bit viewers on Windows and Linux in Studio

In Preferences, under General, DaVinci Resolve Studio now allows enabling 10-bit precision in viewers in Windows and Linux. You will need a capable Nvidia or AMD graphics card, up to date drivers and a 10-bit capable display.

On the client, go to the Applications folder on Mac or the Windows start menu to the DaVinci Resolve folder, and run the DaVinci Remote Monitoring application. Set the IP address of the server machine. Configure your DeckLink or UltraStudio card on the client machine and press start.

The streaming server can now accept the incoming connection prompt and start streaming its monitoring output to remote clients.

Currently, remote streaming reflects the cut, edit, color and deliver viewers. It streams stereo audio and does not show overlays or scopes on the client side. Mac OS clients are limited to 8-bit 4:2:0 video formats.

The Blackmagic Cloud is a new online cloud service that will allow editors, vfx artists, colorists, audio mixers and anyone in the Resolve 18 post-production pipeline to collaborate. The service is in beta now but look for this little Log In icon on the BMD website.

Once logged in you can get an idea of what you’ll be able to do with the Blackmagic Cloud. 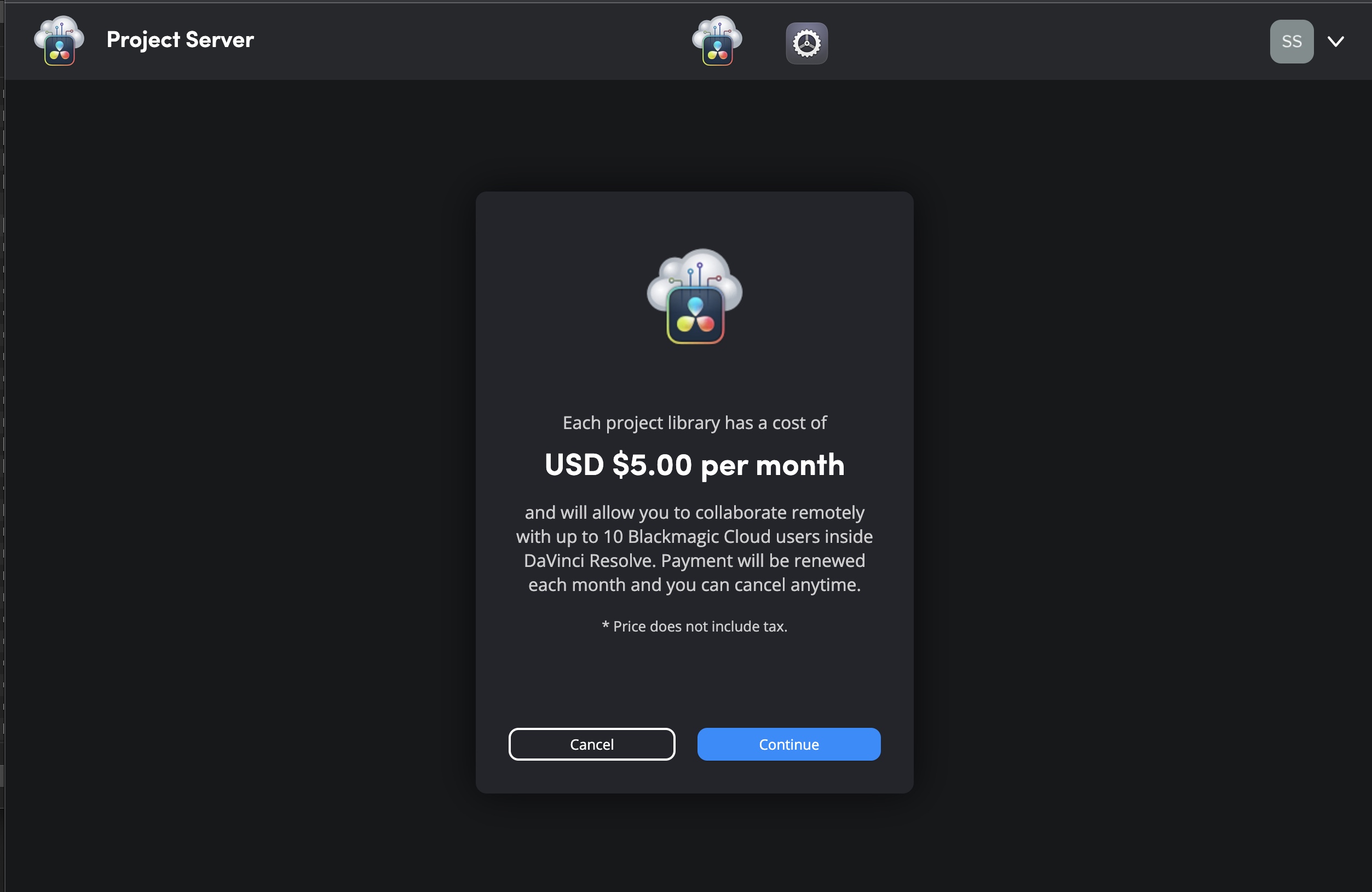 It’s an online server that will probably do a lot of the server and database maintenance for you. Once the library is paid for you can invite collaborators to collaborate even if they are using the free version of Resolve 18.

Per library *not* per user

And those users can be on the free version Resolve

Seems an amazing deal for schools

And if you prefer, Grant mentioned Resolve 18 supports rolling your own cloud server via VPN https://t.co/zxWXhoobfI

That’s pretty amazing. There will also be a review and approval element to this service called Presentations that will allow realtime remote playback like a Zoom meeting compete with markers and notes. Sounds a bit like BMD’s answer to Frame.io if you ask me!

This is a beast of a tool in a familiar-looking eGPU form factor. There’s multiple 10G Ethernet ports as well as a ton of other connection options. Click over to the link above and spend an hour going over this thing. It’s not cheap starting at near $10,000 for 20 TBs and going up to a you don’t want to ask build to order price for the 320 TB model. The cloud options tie in with Resolve 18 and the new Blackmagic Cloud beta. There’s some cool stuff going on here that will take time to digest. 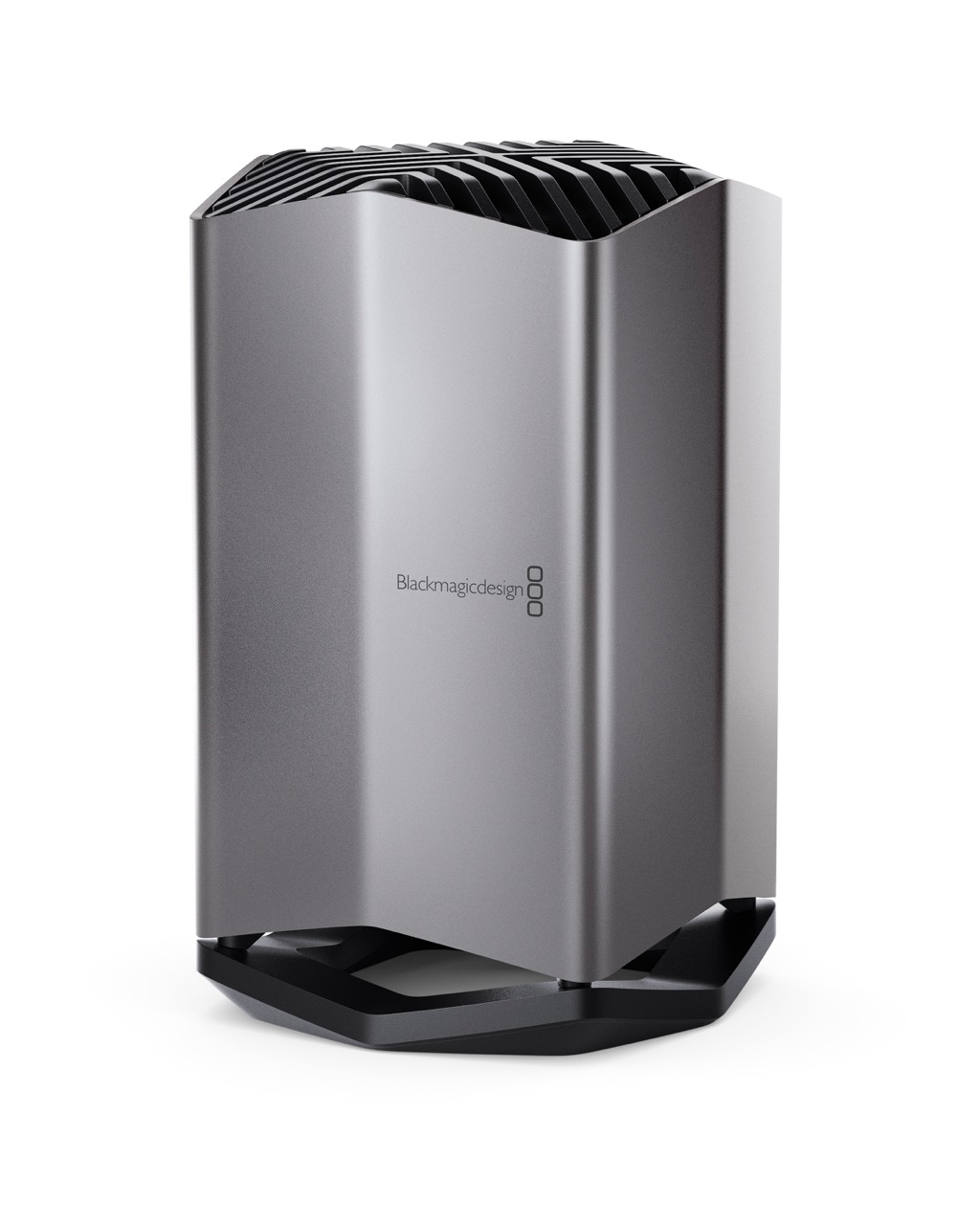 If you want something more in the real of freelancers and small studios the Mini gives a lot of the big hoss above but at a more down to earth option. Starting at nearly $3,000 for 8TBs of flash memory you won’t store a ton of big jobs on the Mini but you can some. Work in the new Resolve 18 proxy options and this is a great tool that only BMD could make.

Moving down the line is the most intriguing product IMHO. The Cloud Post is $395 with many of the same advantages of the above cloud products but you plug in your own USB-C flash drive. I love the idea of this little thing and I’m looking forward to learning more about it.

All of these cloud storage hardware products have an HDMI out to monitor the status of the storage, the bandwidth and the connections. Part of the fun will be watching the thing fill up as you get a real-time visual representation of what is happening on your system. 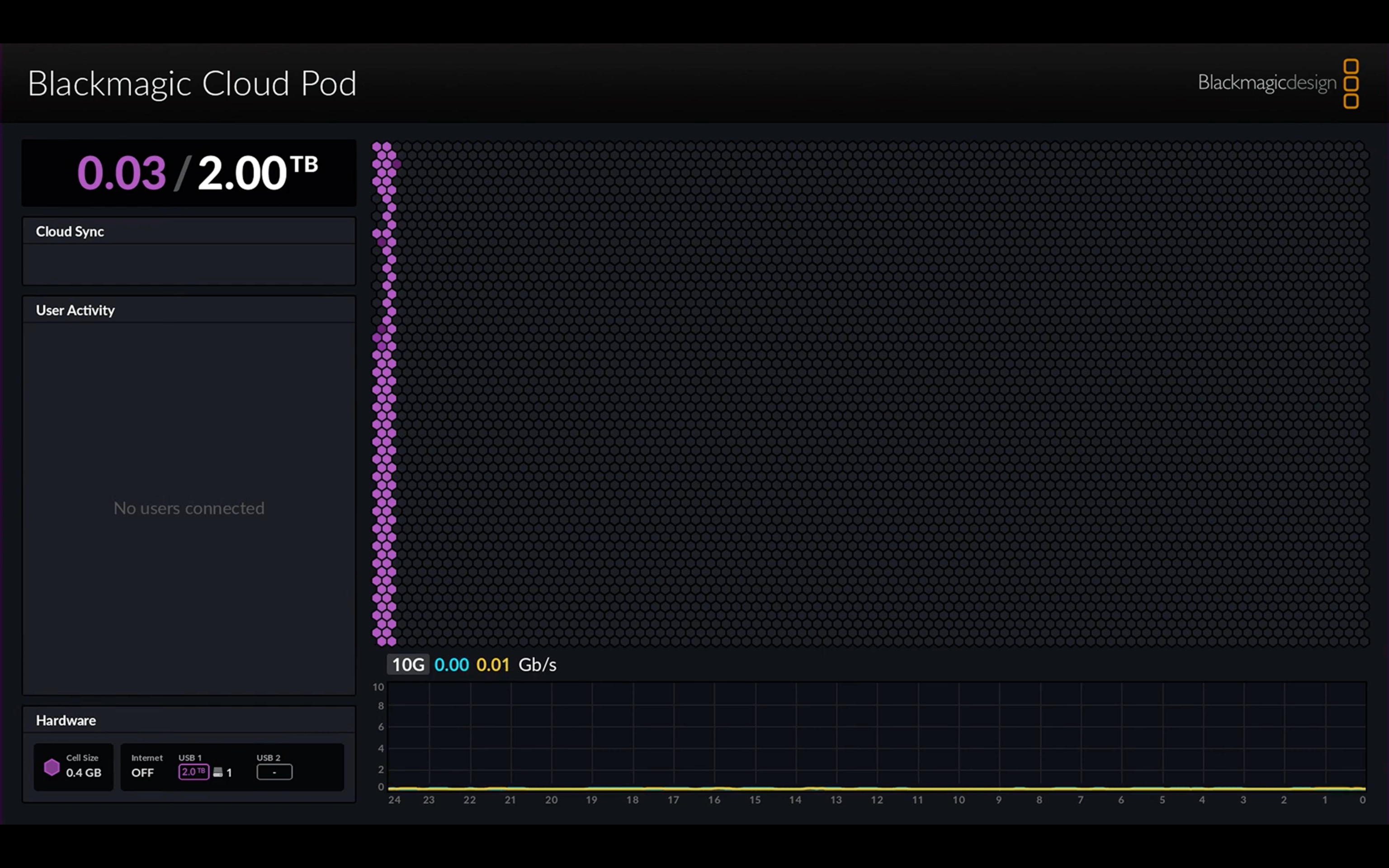 Now you have another HDMI thing to plug into your monitor! 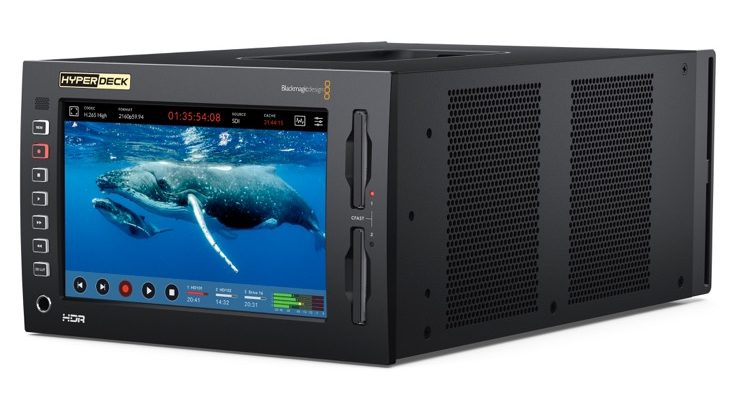 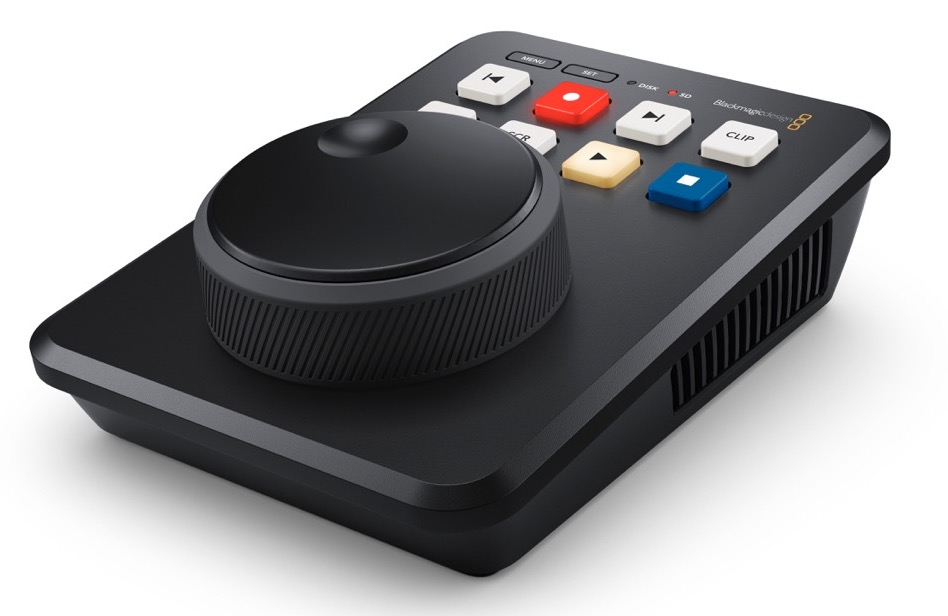