Blackmagic Design announced the Teranex Mini SDI to DisplayPort 8K HDR, an advanced 8K DisplayPort monitoring solution with dual on-screen scope overlays, HDR, 33 point 3D LUTs and monitor calibration that’s been specifically designed for the professional film and television market and to take advantage of a new generation of monitors such as the Pro Display XDR. Teranex Mini SDI to DisplayPort 8K HDR will be available in Oct 2019 from Blackmagic Design resellers worldwide for US$1,295. 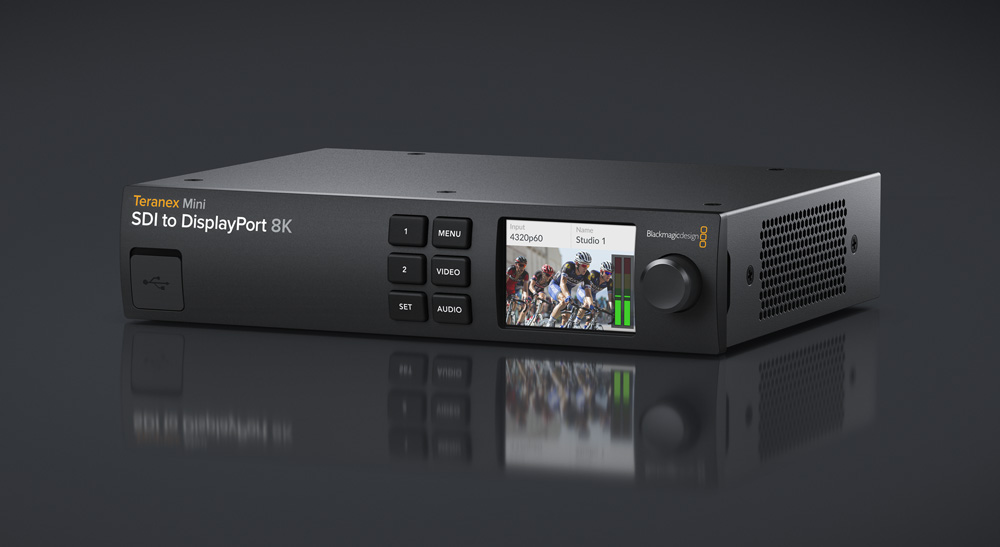 The front panel includes controls and a color display for input video, audio meters, and the video standard indicator. The rear panel has Quad Link 12G-SDI for HD, Ultra HD as well as 8K formats. There are 2 DisplayPort connections for regular computer monitors or USB-C style DisplayPort monitors such as the new Pro Display XDR. The built-in scaler will ensure the video input standard is scaled to the native resolution of the connected DisplayPort monitor. Customers can even connect both 2SI or Square Division inputs.

Teranex Mini SDI to DisplayPort 8K HDR has everything for the latest HDR workflows. All that’s required is to connect an HDR compatible DisplayPort monitor to allow HDR SDI monitoring. Static metadata PQ and Hybrid Log Gamma (HLG) formats in the VPID are handled according to the ST2108-1, ST2084, and the ST425 standards. Teranex Mini SDI to DisplayPort 8K HDR handles ST425 which defines 2 new bits in the VPID to indicate transfer characteristic of SDR, HLG or PQ. Plus the ST2108-1 standard defines how to transport HDR static or dynamic metadata over SDI. Plus there is support for ST2082-10 for 12G SDI as well as ST425 for 3G-SDI sources. Both Rec.2020 and Rec.709 colorspaces are supported and 100% of the DCI-P3 format.

Two fully independent on-screen scopes are included so compliance with broadcast standards is easy when doing critical high-end work. Scopes are overlaid on screen so they can customize position, size and opacity. Customers can select from a range of scopes, including waveform for displaying luminance levels of their input signal. The vectorscope display allows customers to see the intensity of color at 100% SDI reference levels. Customers also get RGB and YUV parade displays, which are ideal for color correction and checking for illegal levels. The histogram shows the distribution of white to black detail in their images and highlights or shadows clipping.

Teranex Mini SDI to DisplayPort 8K HDR includes the same high quality 33 point 3D LUTs as used in the film industry. It’s even possible to calibrate the connected display by connecting a third party USB color probe and Teranex Mini SDI to DisplayPort 8K HDR will analyze the monitor and generate a 3D LUT to correct for color differences between displays. Two independent 3D LUTs can be loaded and customers can select between them from the front panel.

It’s always difficult to know if a monitor is the correct color because every display is slightly different, even between the same model. Teranex Mini SDI to DisplayPort 8K HDR solves this problem as it can use a third party USB probe for automatically aligning their monitor. SpectraCal C6, X-Rite i1 Display Pro or the Klein K10-A probes are supported and plug into the front of the converter. The converter takes care of all the work and will automatically generate test signals on the monitor during the calibration process.

The front panel LCD provides confidence monitoring with both images and accurate audio level meters. There are menus for all functions and it’s easy to scroll through menu “pages” to find settings that need changing. The 3D LUTs can be enabled just by pressing the 1 or 2 buttons. Calibration is also started via the menus and customers simply follow the prompts to calibrate their display. The audio meters can even be switched between VU or PPM ballistics. There are settings for configuring scopes, their on-screen location or opacity. Customers can even view and edit network settings.

For rack mounting, customers can simply add a Teranex Mini Rack Shelf. This consists of a metal tray that holds the converter and allows it to be screwed down before the whole shelf is bolted into the rack. Of course, Teranex Mini SDI to DisplayPort 8K HDR includes rubber feet that customers can attach to the underside of the converter if customers want to place it on a desktop.

Teranex Mini SDI to DisplayPort 8K HDR will be available in Oct 2019 for US$1,295, excluding duties, from Blackmagic Design resellers worldwide.

As part of the multifilm project, “The Found Lederhosen,” for the Hollywood Professional Association’s Tech Retreat 2021, filmmaker Abeer...

Lots of news from Blackmagic Design this February: the new ATEM Mini Extreme, the Web Presenter HD and the...