If you’re a broadcaster then Blackmagic may have the solution for you.

During a live-streamed press conference, Blackmagic Design’s Grant Petty showcased a handful of new products for broadcasting over the air and the web. The live-stream itself was also a way to showcase one of their new product announcements: the Blackmagic Web Presenter. The rest of the products announced all work within a broadcast realm. Below you have two choices. You can watch the entire Grant Petty Blackmagic  Design presser or you can read my cliff-notes with specific details peppered through-out. 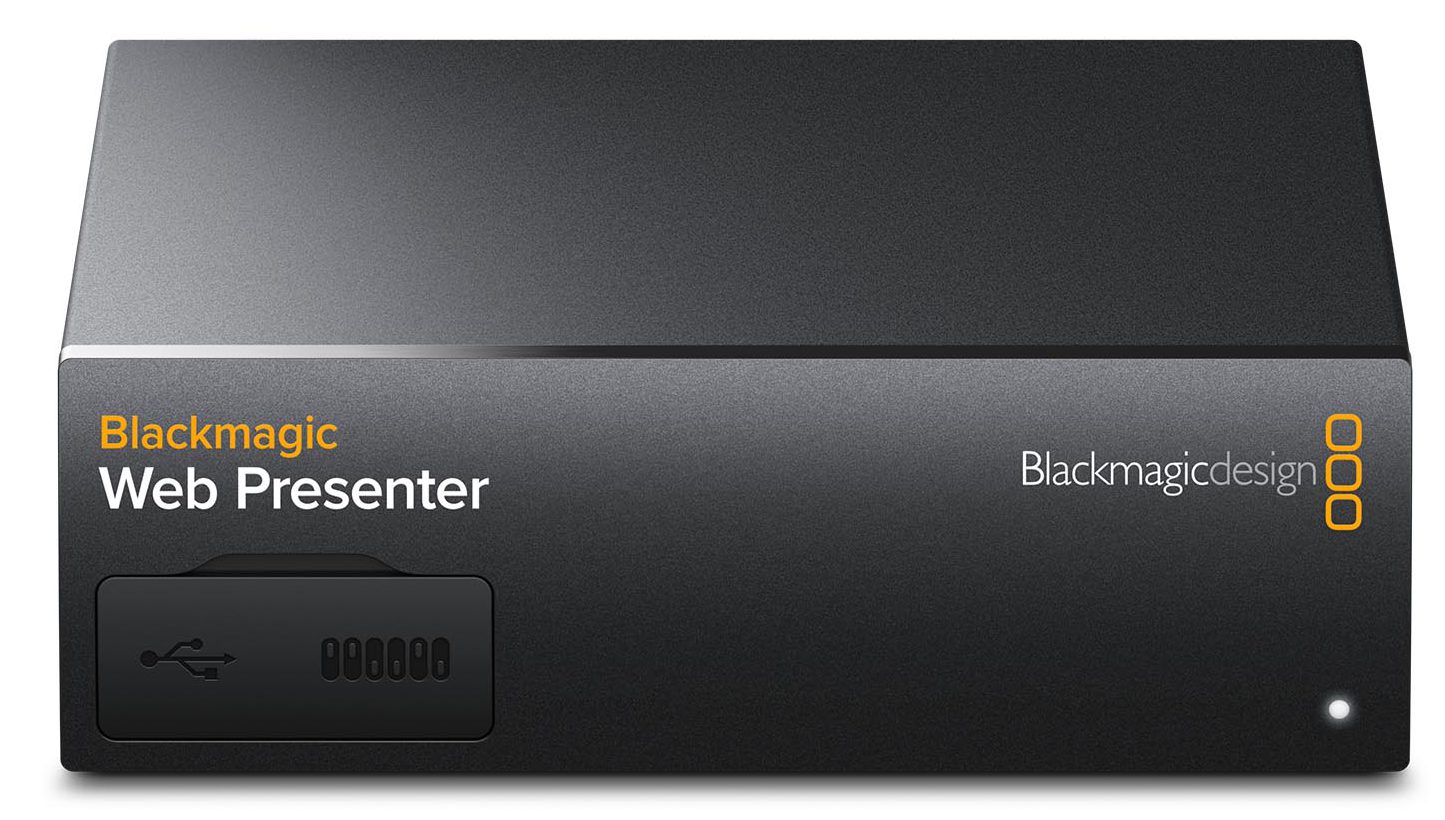 My favorite of their announcements is the Blackmagic Web Presenter. This is a Teranex mini sized converter box which allows people to use professional SDI and HDMI video cameras, or sources, by using open source software tools such as Open Broadcaster and XSplit Broadcaster to open up global live streams like Youtube Live, Facebook Live, Skype, Periscope, and Twitch.tv. Since computers see the Blackmagic Web Presenter as a webcam, any software works and you can use any platform such as Windows, Mac,  Linux, and Chromebook. You can even make broadcast quality Skype calls for doing live interviews easily from any location. If you are a broadcast on-line or even on-air and you promote on-line then this could be a smart tool to pick up. Hell, if you’re a DOP or Director who interviews via Skype then this could be a great way to have the best looking shot in the video call. I mean… shouldn’t the DP have the best-looking image in a video conference?

Blackmagic announced a complete update to the ATEM Television switcher, which is great because the old ATEM was getting a little long in the tooth. The new ATEM Television Studio features four 3G-SDI and four HDMI inputs so 8 different sources such as professional SDI broadcast cameras, consumer HDMI cameras, computers and even video game consoles are available to you on your next broadcast. ATEM Television Studio HD is compatible with all SD and HD formats up to 1080p60. There are two channels of analog audio in, RS-422, Ethernet, and a built-in IEC power supply, along with the program and auxiliary outputs. Users also get SDI and HDMI multi view outputs so they can monitor all sources, preview, and program outputs, along with labels, audio meters and more, all on a single big screen television or broadcast monitor

The ATEM Television Studio HD is an extremely portable design and is the world’s smallest all in one broadcast switcher. It’s only about ⅔ of a rack space wide of the original and is packed with quite a bit of broadcast features making it possible to direct a live switched program, with effects and transitions, right from the front panel. Don’t worry, the switcher also comes with software for those used to directing from their computer. The front panel features 8 large buttons for switching between sources, along with corresponding audio buttons, downstream keyer, fade to black, media player and cut buttons. There’s also a built-in LCD screen, spin knob and additional buttons for menus and to adjust settings like transition and effect parameters. Customers simply press the button for the source that they want to see next in the program, then hit the cut or auto button to switch sources, add effects, or even key in graphics. The ATEM Television Studio HD is priced at $995.

HyperDeck Studio Mini is a small Teranex Mini sized deck that records and plays back broadcast quality 10-bit video using commonly available SD and UHS-II cards. This looks like expanded tech from Blackmagic’s 4K duplicator and a smart move by Blackmagic to allow professionals to not only record their programs onto commonly available SH and UHS-II cards but to also use these same cards for their media playback during a show. HyperDeck Studio Mini features 6G-SDI for working with all SD, HD and Ultra HD formats up to 2160p30. HyperDeck Studio Mini is unique because it includes HDMI for monitoring, a built-in sync generator and ethernet for uploading media via FTP so it also becomes an ideal solution for digital signage tasks. 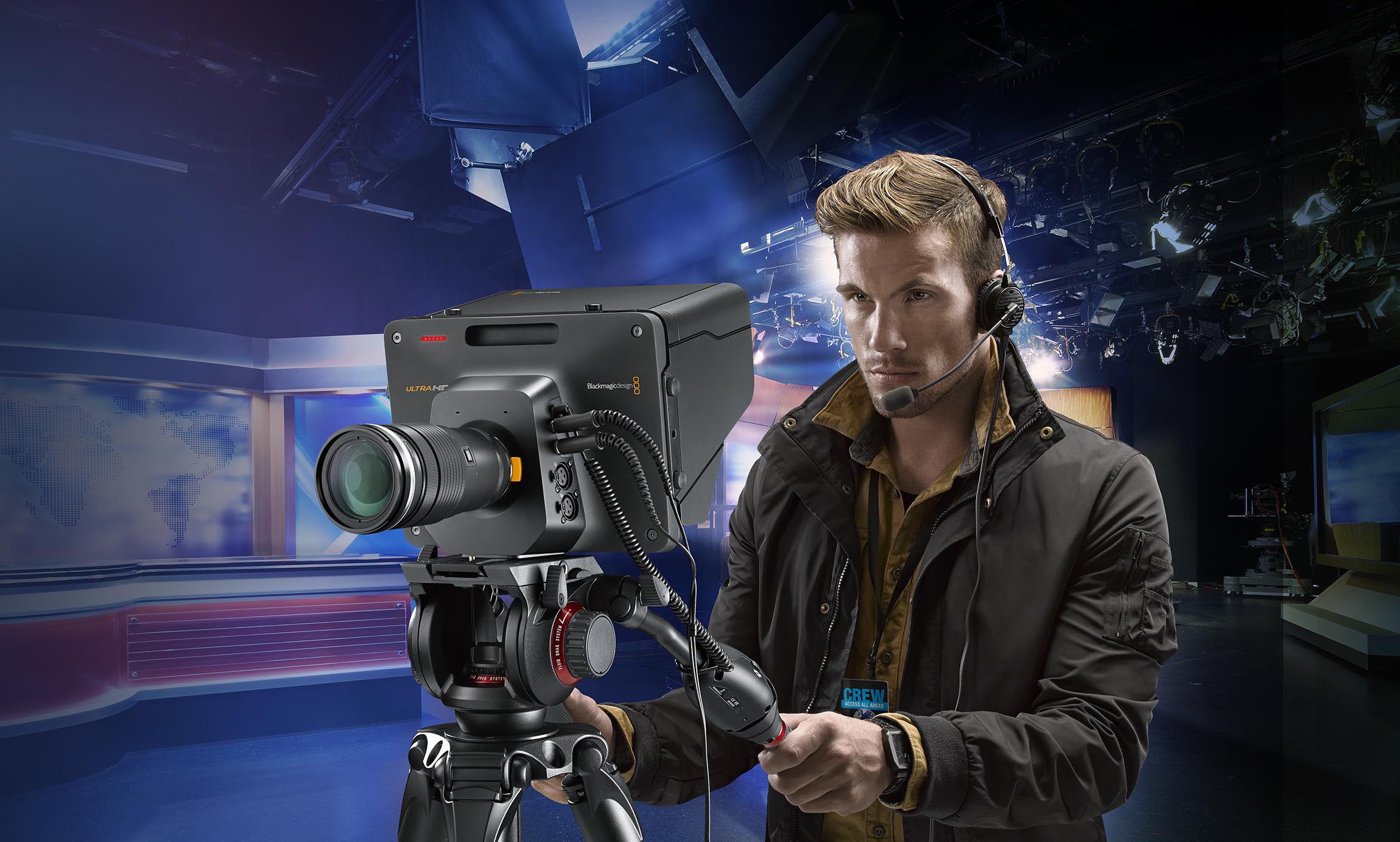 It’s all about customer feedback with this change. Feedback proved Blackmagic Studio Camera users typically used the cameras with AC plug-in power so they asked for a model without the battery. The battery not only made the cameras heavier but also made for difficult shipping when shipped air freight. Removing the battery allowed Blackmagic to reduce the price of the camera. The HD Model has been reduced $200 and in priced at $1495. The Ultra HD Blackmagic Studi Camera has been reduced $800 from $2,495 to $1,695.

With the new lower price the new Blackmagic Studio Camera 4K is now the same price as the previous HD only model, making it easier than ever for productions to make the switch to Ultra HD.