Which Blackmagic Camera is best for you and the shooting situation you face?

The pace of new cameras released has reached near break neck speeds. So which Blackmagic camera is the right one for you? Which camera is best for the shooting situations at hand?  The thing about a Blackmagic Camera is each one has been produced to fulfill a roll or a niche. For Example, some are better in a studio and others shine while flying on a brushless gimbal.

So which camera is the best? Is it the 4.6K URSA or the 4.6K URSA Mini? Hold on. Not yet, because the 4.6K sensor has not been released yet so I reserve my opinion until it’s in hand. Until then this is my list. Right or wrong. It’s all my opinion and it’s likely shit. 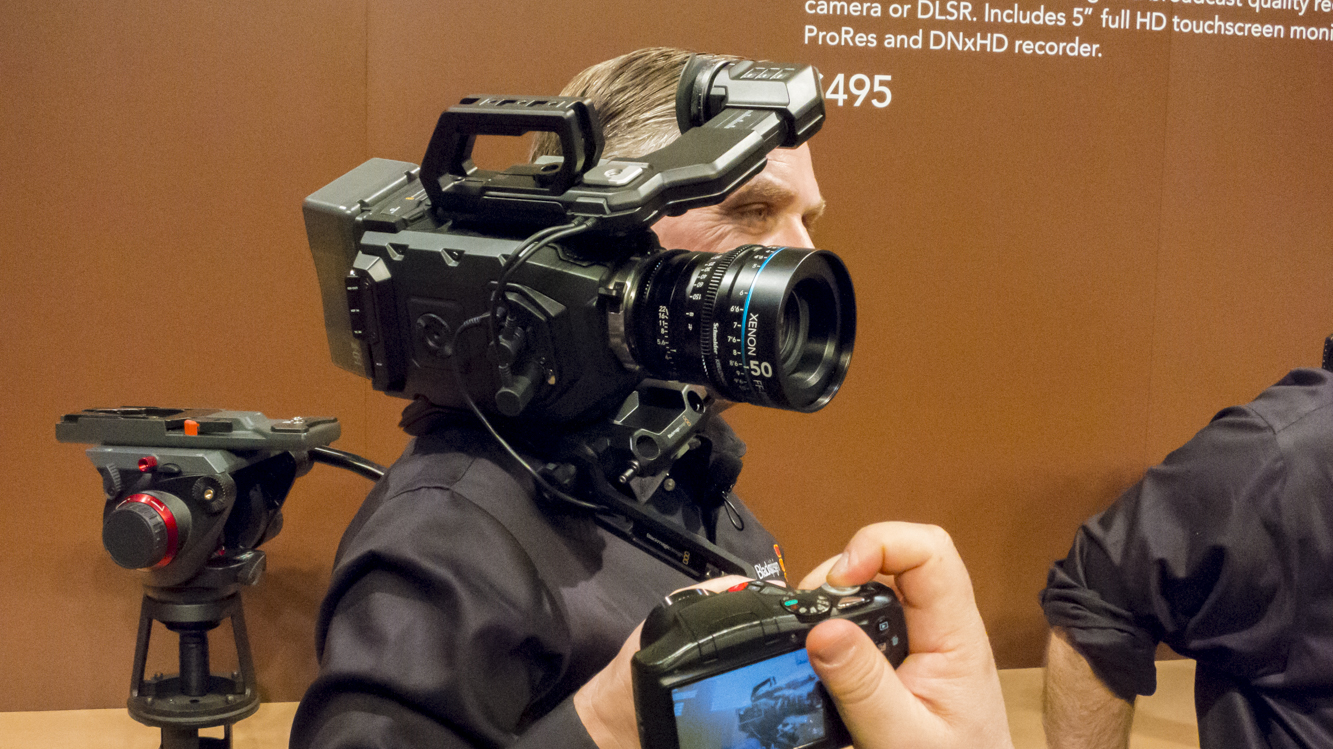 Why does the URSA Mini win out? This camera can succeed in many different shooting situations, and is the first BMD camera

capable of easy Run & Gun operation. Yet, documentary shooting is not the only field for the URSA Mini, oh no, this camera can moonlight as a full blown production camera with its 4K raw capability. 12 stops of dynamic range, a global shutter, 4K raw recording, and adaptability to include B4 ENG lenses and you have Blackmagic’s most flexible camera which will fit in most situations.

Yes, this camera has 12 stops of dynamic range. Yes, it has a global shutter. Yes, this camera can shoot some amazingly beautiful footage under the right lighting. So what is keeping this camera our of first place? Weight. 16 pounds of back breaking camera weight. So much weight in fact, I break Arri rosettes when hand-hold shooting with my Kino Grip.

Yet the genius of the larger design, yes I said genius, is how easy it is to use when working with a camera crew and sound guy. To use the URSA and not fall in love with either its electronic viewfinder or 10 inch screen means you’re not using it right. 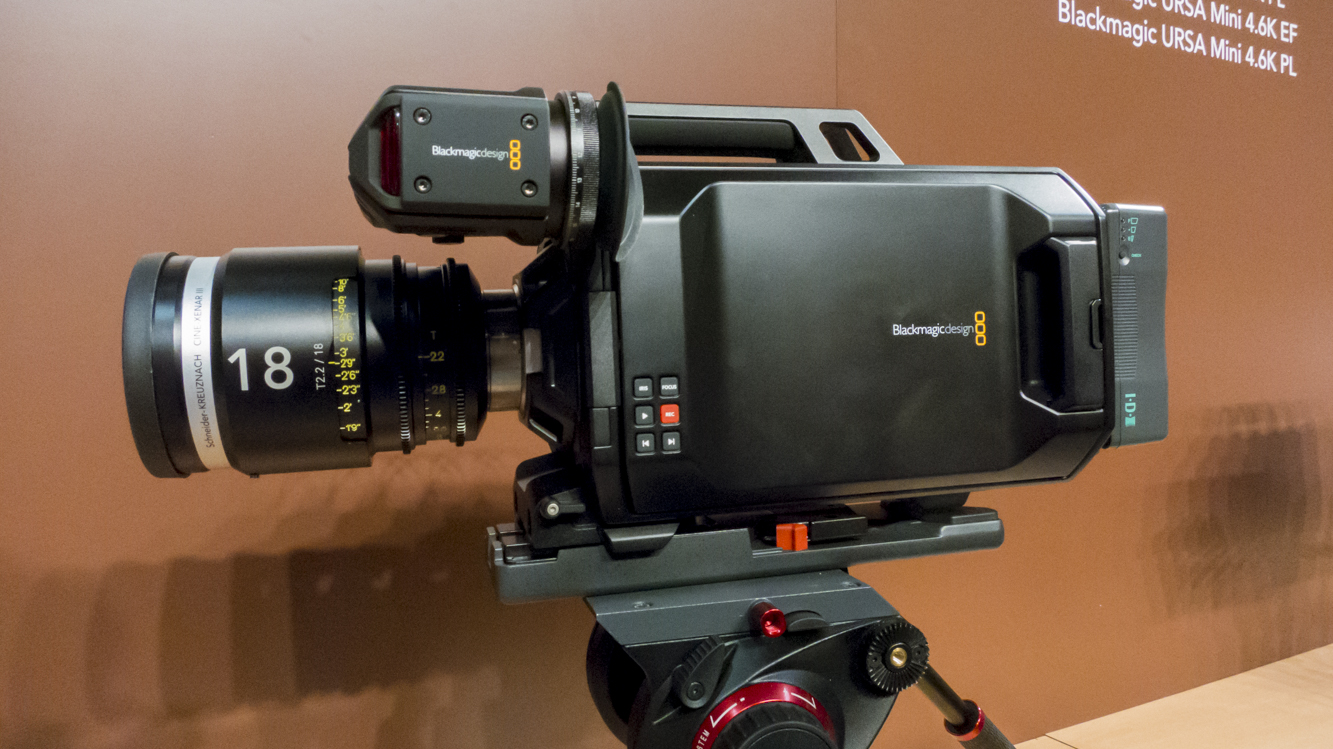 This camera is a solid studio camera which can moonlight as an indie digital cinema camera. If you have a crew and a G&E package this camera may out perform more expensive cameras.  Where the URSA begins to fail, or becomes frustrating to operate, is when one isn’t able to light for the URSA’s light hungry sensor.  Would I shoot an Indie feature on this camera? If the shoot called for mostly daylight or studio work. If one is facing an Indie night shoots I’d wait for the 4.6K sensor.

Another thing to love about the URSA… the [email protected]#$%ing update-able sensor.  One may update the URSA to the 4.6K EF mount for $1995. Meaning for just under two thousand dollars you essentially get a new camera. 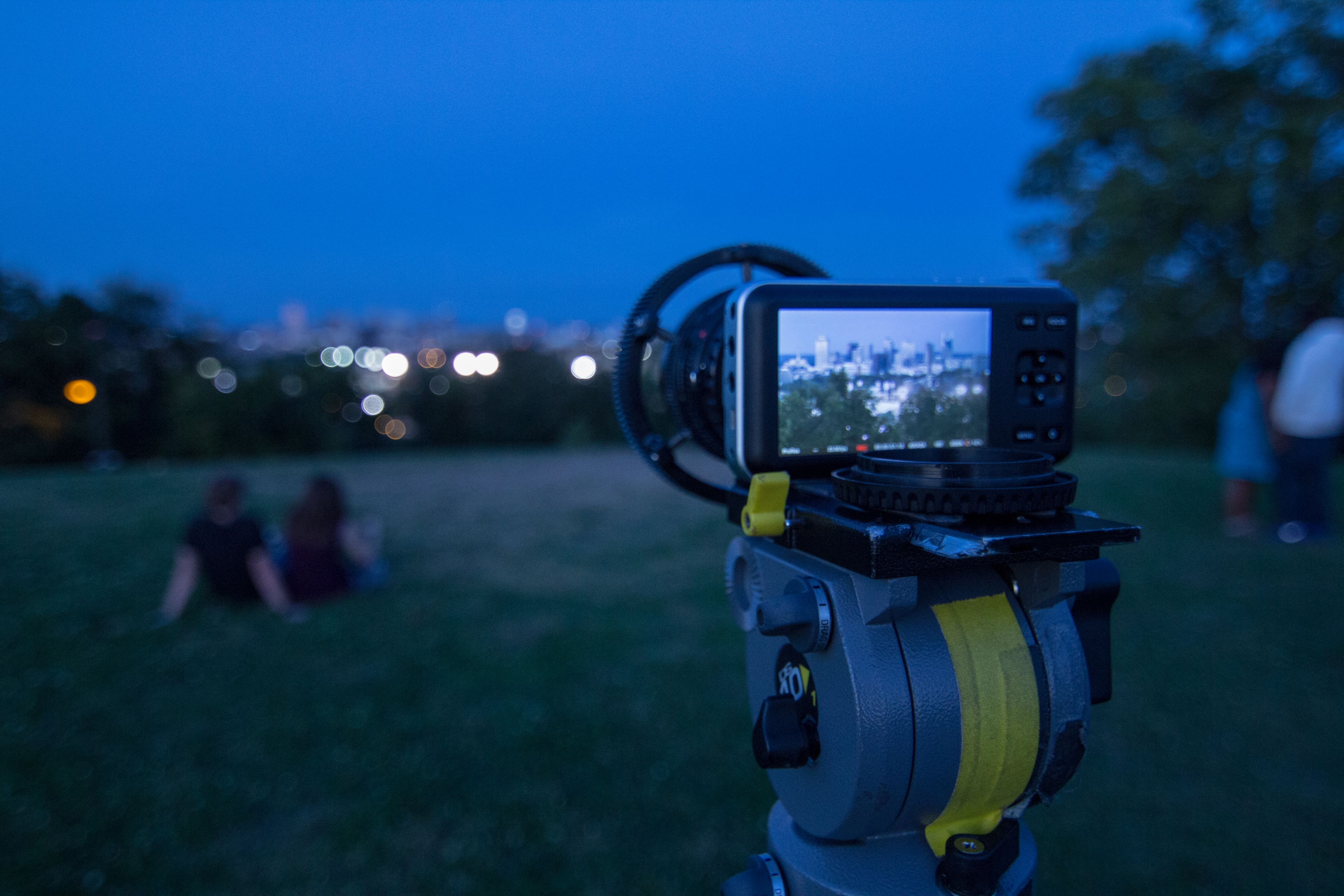 I see this camera often. Professional shooters, non-shooters, and wannabe shooters all seem to have this camera at the ready. Do you know why this camera is so popular? It’s  inexpensive, $995, and an easy entry into the world of Blackmagic cameras. Rumor has it the Pocket Cinema Camera holds the record for the most units sold at B&H. Yes, I’m spreading rumors, and no, I don’t know it to be true. Shame on me.

So why is this camera so popular? Why does it fall at #3 on my list? It could be because of the 1080 12bit raw recording, or the 1080 ProRes HQ, or the easy to use size of the camera.  Actually, it’s all of it. The Pocket Cinema Camera is the quintessential “b” camera. The walk-around and shoot for fun camera. It’s a camera that can be mounted anywhere, or used as a POV camera. The size and weight of this camera makes it easy to mount it anywhere. Add a Metabones speed booster and the Pocket Camera becomes a full stop brighter and the image comes closer to the Super 35mm look. Throw on a little loupe and you can shoot anywhere. The only thing this camera is missing is High Frame Rates and a professional audio input.

This is the camera that started it all for Blackmagic. What the Cinema Camera does well is production where you’re going to be color grading the footage. With the flattest film “log” of any of Blackmagic’s cameras, and the greatest dynamic range falling to 13 stops, the Cinema Camera still puts out the best looking color of all the other camera options.

To me, this camera has a more cinematic feel to its footage than the rest of the bunch. One of the draw backs, it’s not really a draw back to me, is the smaller sensor size. I’ve been using one for nearly three years and the sensor size has yet to be a problem, but I can see how one might have a problem with the sensor size. If one has the M4/3 version Metabones makes a speed booster which can brighten the image and get it close to Super 35mm depth of field. Metabones also makes a Leica R speed booster for the M4/3 Cinema Camera. This could be a great cinematic option for many shooters.

Where this camera shines is on a Ronin. The smaller sensor helps keep the depth of field in a more usable range and the 13 stops of Dynamic Range and great final color can look fantastic. My one wish for this camera has been high frame rate options. Unfortunately, Blackmagic has been unable to add HFR to this camera.

Just about every problem with this camera when it was first announced has been fixed or corrected in someway. For example, the 1600 ISO is now very usable. The on-board battery is more of a life saver after a long day of shooting. So why is this camera in fourth place? It can be awkward to shoot run & gun footage, rolling shutter, and the expense of needed accessories to make the Cinema Camera shooting experience more positive. 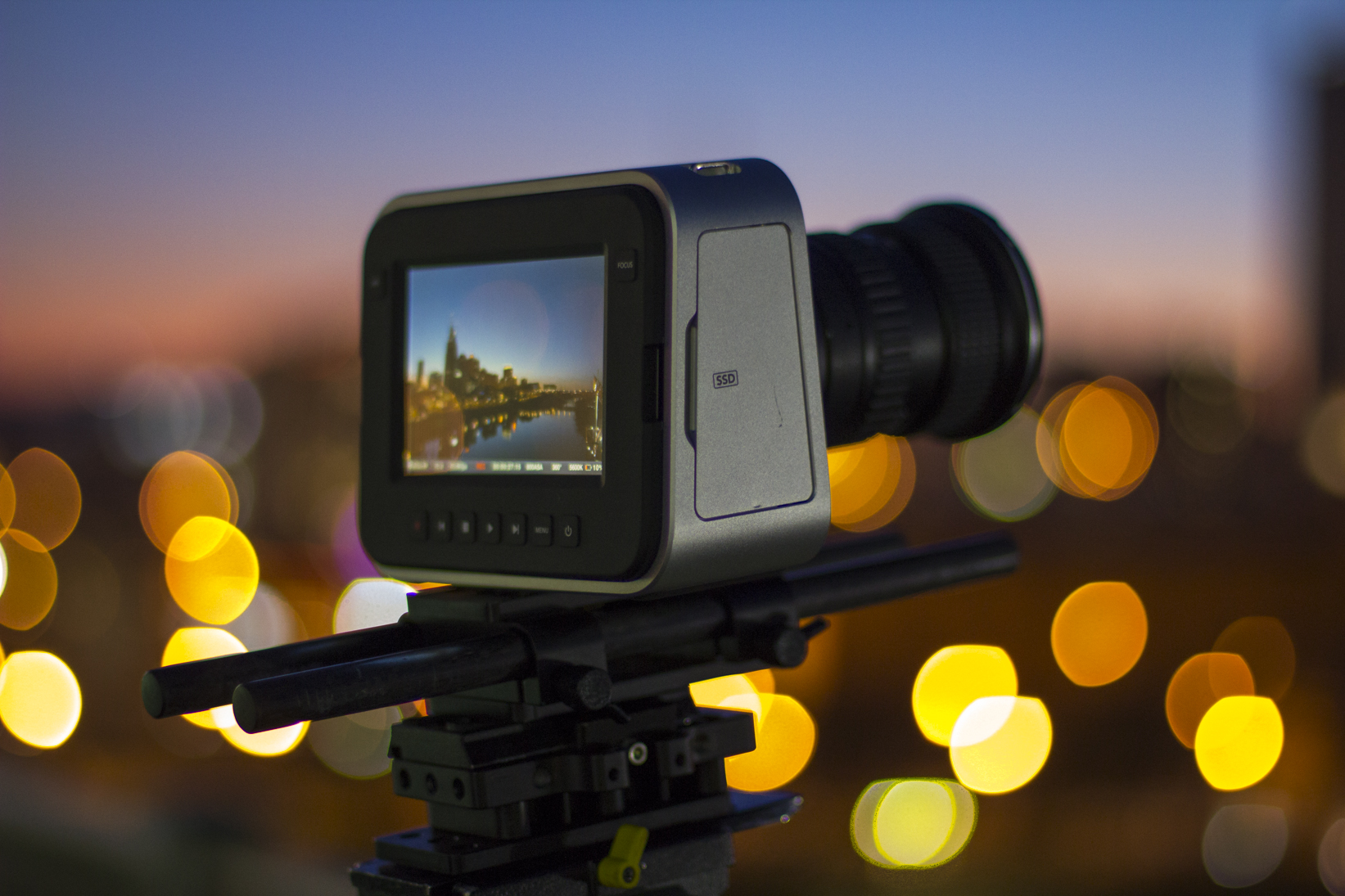 To me the Production Camera was a reaction to the criticism heard over the 2.5K Cinema Camera. They made this camera 4K with a global sensor closer to S35mm. The only problem was the lack of low light sensitivity. The Production Camera has a base ISO of 400 and a problematic fixed noise pattern sometimes found when shooting at 800ISO.

So Blackmagic marketed the BMPC as a studio/production camera where shooters have the gear and crew to light for this camera.  The files off this sensor are not as flat as the Cinema Camera and the color is more saturated.  You’re going to want to color grade the footage to make it shine, because this camera can put out some fantastic images.

At $2995 for the EF and $2995 for the PL version you’ve got a great companion to the URSA.  Plus, where else are you going to find a 4K PL camera, with a global-shutter, for less than 3 grand? What I wouldn’t use this camera. I wouldn’t shoot Reality TV or Run & Gun docs with this camera. What I might shoot with this camera are industrials, interviews, stand ups, news promotions, anything outside during the day and anything in a studio with a lighting crew. If I’m shooting for a 1080 finish and I had to choose between the BMPC and the BMCC I would choose the latter and that is why I placed the BMPC lower on this list. 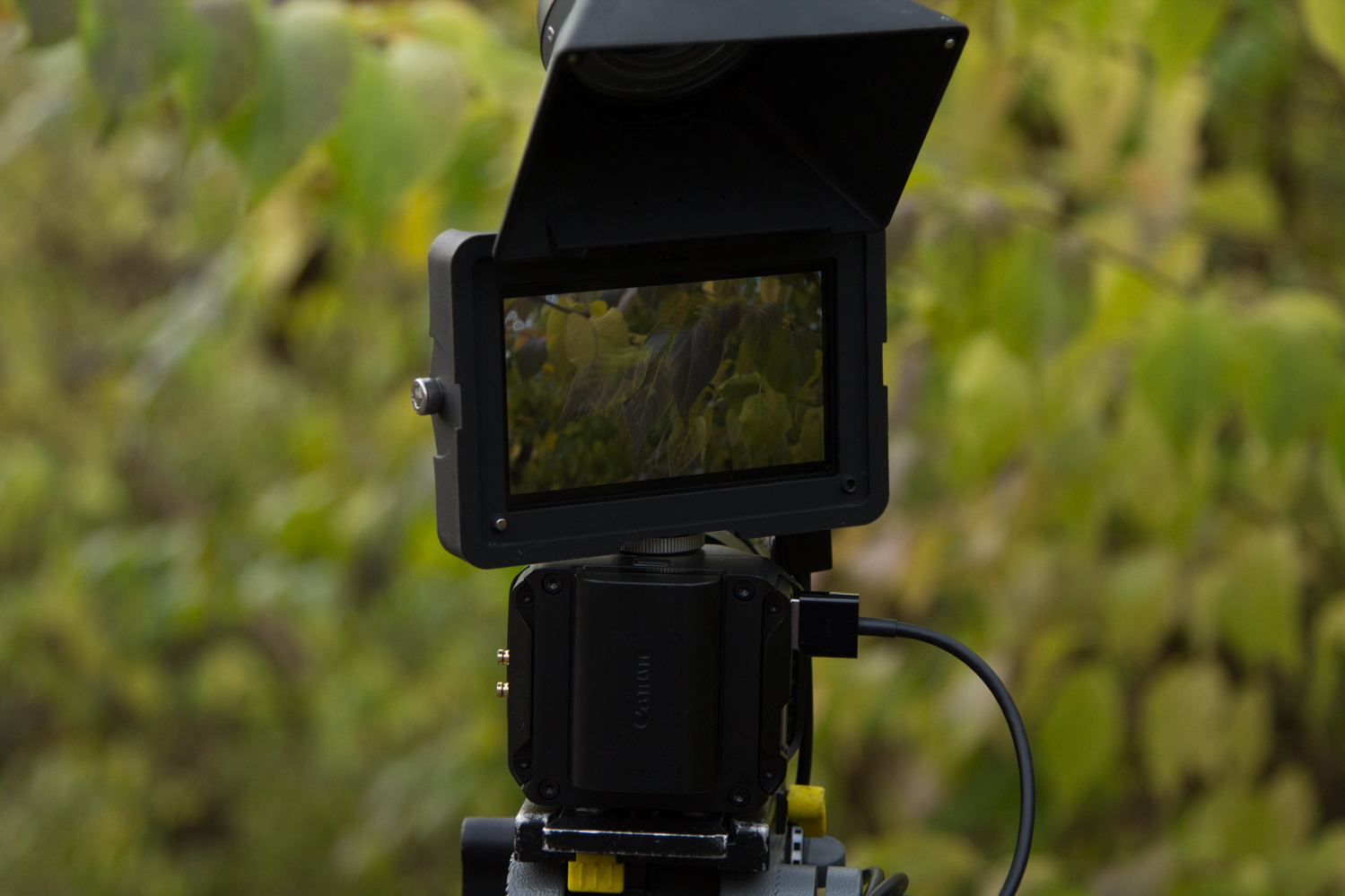 With no way to record internally this camera must be paired with Blackmagic’s Video Assist. Of course, one could use a different recorder, like a 4K recorder, opening up the flexibility with external 4K recording. Even without the large screen, this is an improvement over the Studio Camera. This camera is portable, able to be a live broadcast camera, or be used a small walk-around camera. As of right now, I am shooting with this camera for a review. Even with very little time I’m already placing this camera above the original Studio Camera. 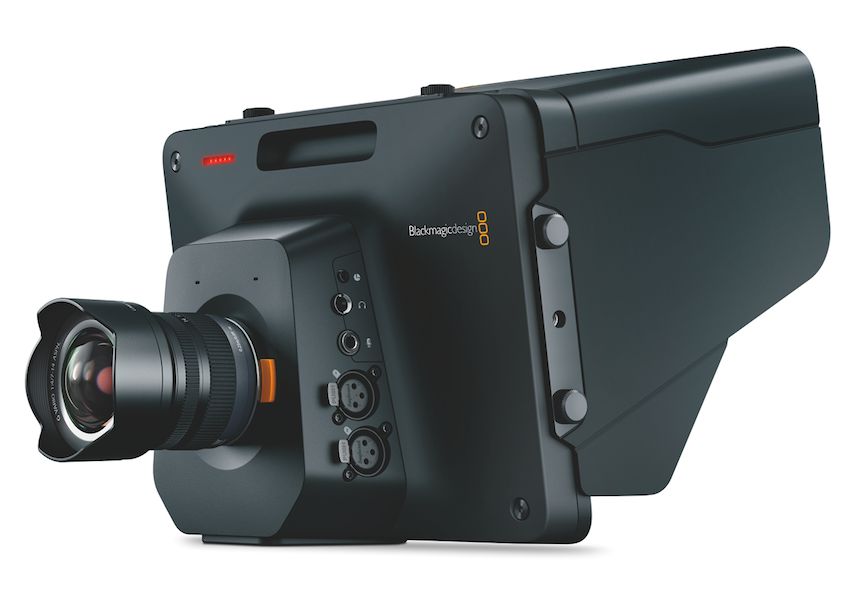 If there is a niche camera this is it. I joke the Studio Camera is an iPad with a M4/3 lens mount. What this camera does well, and really should only be used for, is live broadcasting. This camera could be used for meetings, church ceremonies, conferences, schools, universities, and anything else live to internet or on-air. These cameras work best with Blackmagic’s ATEM Switcher. When paired with the switcher one can use a version of DaVinci Resolve to dial in the color for a multi-cam broadcast. The image and dynamic range from these cameras is way more tuned to a live broadcast feel than Blackmagic’s more cinematic cameras and there is nothing wrong with that fact. I mean who’d in their right mind want the Cinema Camera’s flat “Film” look in a live broadcast. Considering the lack of flexibility and, no way to record internally, the Blackmagic Studio Camera falls to the bottom of my favorite Blackmagic Cameras. Now, if I shot a ton more live events my opinion might change.

What about Blackmagic Cameras not out yet?

This is an exciting camera to say the least with one pretty big caveat, it’s not 4K. Now, I can’t comment on this camera yet because it isn’t out yet, and I have yet to use it or test it, outside of NAB 2015  I think, however,  it will be a new favorite for shooters because of its 60fps, small size, global shutter, and 12 bit 1080 raw recording. With a design meant to favor mounting the camera just about anywhere the Micro Cinema Camera looks to very capable.

This, for what I’ve seen so far, will likely be the king of Blackmagic Cameras once it is released. When will Blackmagic release their new sensor is something only they know. The rest of us will have to dream, pine, and hope that day comes soon.

So what does all this ranking mean? Not a thing. These are only my opinions and I’m only trying to help those who are looking to rent or buy a Blackmagic camera in the near future. I want those shooters to be happy with their purchase/rental. Another thing, as time goes by, Blackmagic continues to update the firmware to all of these cameras making them better. For example, the original 2.5K Blackmagic Cinema Camera has enjoyed many upgrades making the camera more user friendly and flexible. Until new releases, updated firmware, and new announcements this is my list. This list, and the order these cameras fall on this list will undoubtedly change. 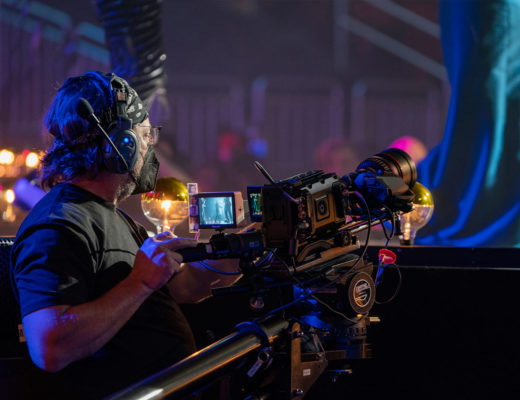