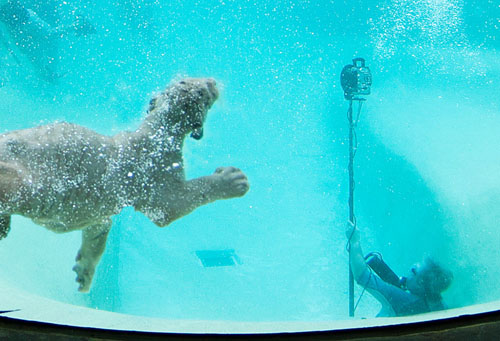 K-Tek, known for their professional boom poles, as well as camcorder and audio accessories, announces that still photographer Roger Berry is using K-Tek’s Klassic K-202 and Klassic Traveler K-87 boom poles to support his cameras for the stunning still images he captures to promote IndiaVRTours.

“If I didn’t know better I would have sworn K-Tek boom poles were made for stills and even underwater shooting use,” says Berry. “I started using K-Tek boom poles about five years ago on my many trips to India, where I shoot 360? spherical panorama photos. At that time, I was using a Canon 20D camera, then the 5D and now the 5D MkII with a Nikon 10.5mm fisheye lens.

“This K-Tek pole has many uses. It’s a monopod, long pole for high shots, flip it upside-down for low shots, extend it out over water, out windows, cliffs and bridges (this is where you really need to trust the pole with $3500 of camera gear on it!) It’s also been my hiking stick and theft deterrent device. (He who carries a big stick is more likely to be left alone!)

“It even worked fantastically for shooting underwater photos of tigers swimming!
Taking K-Tek poles under water is not a problem, since they have specific water release points throughout, from the headpiece, to each section and the bottom. So the pole won’t get filled with water. As for rust, not a problem either.

Berry uses two off the shelf K-Tek poles to accommodate different lengths. The K-202 extends to 16′. For shorter lengths he also has a Klassic Traveler (K-87) which folds down to 1′ 10″ and extends to 7′ 3″.

Berry’s incredible shots of India and can be seen on www.indiatours.com as well as other promotional venues to bring more people to the beauty and enchantment that is India.