What’s old is new again, and easier than ever.

I’ve always been a little different. That’s the only explanation I have for cutting gels out of Rosco and Lee swatch books and putting them behind video lenses.

As a camera assistant in the bygone days of film, I spent many nervous hours attaching nets to the backs of lenses using nail polish and/or rubber bands. I took things further when I began shooting video. Most of these jobs lasted only a day, so attaching a net to the back of a lens wasn’t feasible. After some experimentation, I settled on plastic cut from transparency film slide holders. I had no need to attach anything to the lens; instead, I sandwiched a circular piece of plastic between the lens and the sensor cover glass.

From there I experimented with color, which lead to my destroying a number of gel swatch books. (Chocolate was my favorite color as it made people look tan and fit. Shooting at the beach proved problematic, though, as blue water turned to mud.)

At that time, video cameras didn’t have menus. Adjusting aspects of the electronic image, such as manipulating the detail circuit (which drew a dark line around areas of high contrast to make edges look sharper) or tweaking the color matrix (which governed the color response of the camera), meant pulling the side off the camera and adjusting pots with a very small screwdriver. Most of us didn’t know enough to do this well, or at all. Cutting gel circles out of free swatch books was a lot easier.

Often a DP chose their favorite rental house based on the aesthetic preferences of the in-house engineer, who created a standard “shop look.” The few adjustments we made in the field were often brute force measures that made use of scissors over screwdrivers.

NTSC was a soft medium by today’s standards, and conventional wisdom dictated that audiences preferred sharp images. Hybrid directors of photography, who worked in both film and video, had a different point of view. I preferred softer images to artificially-sharpened ones.

Diffusion filtration was a lifesaver, but not always practical. As I transitioned from shooting film to video (having moved away from Hollywood to a smaller market, where video was dominant) I learned to do more with less. I rarely had a matte box, and often the only filter I carried was a polarizer, mounted in a clip-on sunshade. This made adding a 1/4 black Pro Mist (my old video standby) nearly impossible.

I wasn’t the only person with this problem. A San Francisco Bay Area-based DP, Jim Iacona, felt the same pain. His solution was to design and manufacture a behind-the-lens plastic net holder for B4-mount lenses. He called it the I-Ring. It consisted of two interlocking plastic rings. One stretched a piece of netting over the bottom ring and then snapped the top ring into place, capturing the fabric between the two rings. After trimming away the excess, it was dead simple to snap this assembly onto the back of a B4 zoom lens.

I owned three or four I-Rings, each made up with a different type of netting. My favorite material was bobbinet, which is the active ingredient in single and double grip nets. It has a hexagonal weave, so the holes in the netting appear smooth and round. Light spreads at a 90º angle to the thread, so the relatively round hole resulted in a soft glow instead of a star or cross effect. Many of my contemporaries used wedding veil, but the shiny cross-hatched weave turned every light source into a four-pointed star—even large, soft overhead fluorescents.

Fogal stocking material, long popular for use on the back of 35mm motion picture lenses, proved too thick for video use. This was unfortunate, as I knew several DPs who took “Fogal purchasing trips” to Paris every year and wrote them off their taxes.

Behind-the-lens nets provided a number of advantages over traditional glass filters. I didn’t need a matte box, which saved time and money. Front-of-lens diffusion had to be changed with the focal length to maintain a consistent look, but a behind-the-lens net created the same look at just about every focal length. And the net created interesting patterns in out-of-focus highlights.

The RED One camera changed everything. The Sony F900, a frequent recipient of behind-the-lens filtration and one of the last B4-mount cameras, faded into obscurity. Matte boxes became commonplace. We still used diffusion to create an analog feel in a digital medium, but at much lighter densities. Then the original ARRI Alexa changed everything again, as it didn’t have the same electronic feel that we saw in other digital cameras. Diffusion returned to its rightful place as a creative choice, rather than as a defensive weapon in the face of an immature technology.

Now it seems we’re in the midst of a visual renaissance. Digital cameras look better than ever, and I see a level of experimentation that I’ve never seen before. From episodic TV to independent films, filmmakers are exploring with looks more than I’ve ever seen. Behind-the-lens nets are making a comeback.

Last year, while teaching classes for The ARRI Academy, I was happily surprised to see the return of my old friend, the clip-on behind-the-lens net holder.

Every ARRI Signature Prime ships with a magnetic behind-the-lens magnetic filter holder. I won’t call it a net holder, as some enterprising cinematographers in Germany recently shot a demo that employed a wide variety of materials that extended well beyond netting. If you can fit something into that holder, and it is in some way transparent, you can make it into a filter.

There are a couple of phenomena that need to be clarified. 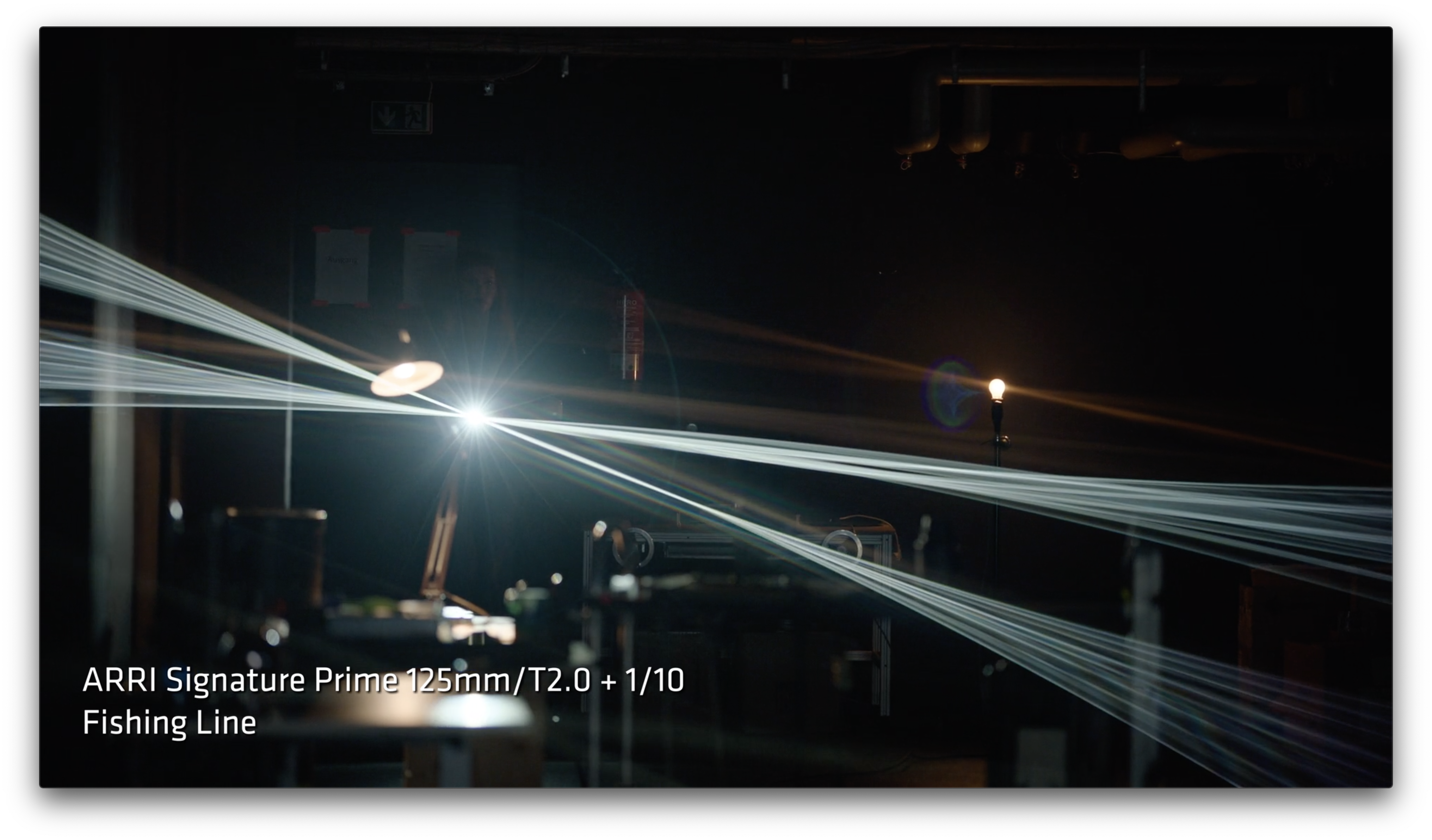 Streaks derive from highlights in diffusion material and run at 90º to the orientation of the material. We can see this more clearly in the bokeh of the next shot:

When dealing with an effect this strong, it’s important to control the direction of the streaks. They become a compositional element and can be used to direct attention and create tension within the frame. The I-Ring made this both simple and difficult, as the ring rotated freely, but it was difficult to gauge when an effect was perfectly vertical or horizontal. The Signature Prime filter holder is equipped with a witness mark and the magnets that hold the filter holder onto the lens act as click stops, so it’s dead simple to orient a net in a particular direction and duplicate that orientation across a number of lenses.

Putting a star-shaped aperture in the magnetic filter holder creates this image:

My crude understanding of this effect is this: the star-shaped aperture imposes its shape on the wavefronts of the out-of-focus highlights in semi-predictable ways. For example, in the image above, there’s a really sharp star on the left side of the frame that corresponds with an extremely soft highlight in the clean image above. The lights that are farther away, and less out-of-focus, are smaller and less distinct.

I’m not used to seeing such a strong, random texture in out-of-focus highlights. Normally we soften backgrounds to make them less distracting, but this filtration adds frenetic energy to the image. The hard texture causes my eye to move around the frame, but the swirling bokeh brings me back to the talent’s face.

This is really disturbing. I love it. There are so many creative uses for this.

This is a piece of aluminum foil, with lots of holes in it, placed behind the lens. Each hole becomes an aperture. When the subject is thrown out of focus, all the pinhole images diverge and create a cluster of hard-edged overlapping images. Years ago I did something similar with an F55 and a piece of foil, but the foil was placed in place of a lens, not behind it. I like this more.

I’ve long wondered why no one had reinvented the I-Ring for film use. Now it seems ARRI has done exactly this. It only makes sense. At the pace that modern crews have to work, no one has time to sit around and wait for nail polish to dry. And this net holder smells a lot better.