Artists make the most of a crumbling world.

In a post-industrial world, scenes of urban and industrial decay is the new wabi sabi: “nothing lasts, nothing is finished, and nothing is perfect” (Richard Powell

). And perhaps nowhere in the US is decay more evident than areas of Detroit. As a result, Detroit has become a rich source of inspiration for photojournalists. 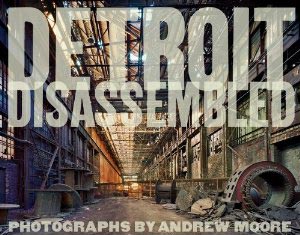 For example: While in Amsterdam last summer, we stumbled upon a gallery that was hosting an arresting photo exhibit by Andrew Moore. If you did not get a chance to see this exhibit in person, the images are also contained on his web site and in his book Detroit Disassembled

(available on Amazon, pictured at right). 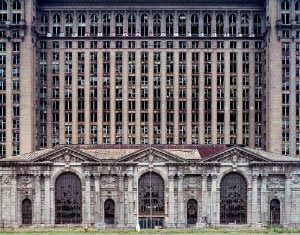 More recently, Yves Marchand and Romain Meffre have taken on the subject. Their web site shares some poignant images from their new book The Ruins of Detroit 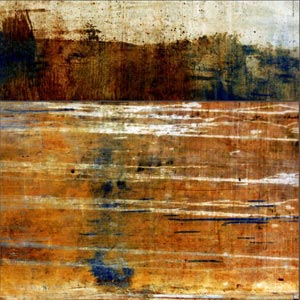 If wide-angle Detroit decay isn't your cup of tea, then get closer, no matter where you are: Some artists such as Washington-based LuAnn Ostergaard are creating luscious pieces that start as close-up images “captured from urban entropy, mostly weathered metal panels and scarred surfaces.” An example of her work titled Rivercrest is pictured at right; you can view more of her work on her web site or Facebook page.