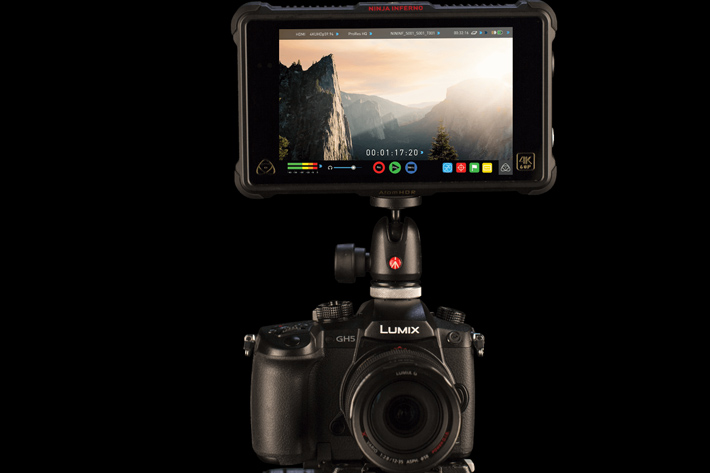 Timed with the release of the Panasonic GH5, the new low price of the Ninja Inferno will, as Atomos says “empower the masses”. There is also an update for different monitors.

Available from today, the free upgrade available to download enables CDNG Raw recording from select Sony, Canon and Panasonic cameras on the Shogun Inferno, Shogun Flame and the original Shogun products. Not only are these the worlds’ first monitor-recorders to offer CDNG recording on a single SSD, they are also the world’s first monitor-recorders to offer CDNG Raw to end users for free, says Atomos.

CDNG records Raw images from a camera’s sensor as a sequence of individual frames rather than video, allowing users to recreate a Hollywood post production process allowing custom control over white balance, noise reduction & debayering rather than relying on the camera’s real time processing. Unlike video, the Raw from each camera brand is different, offering different advantages to the user and requiring bespoke engineering for each Raw format in the recorder itself. For this release, Atomos have enabled Sony Raw recording from the FS700 / FS7 / FS5, Canon Raw recording from the C300MKII / C500 and Panasonic Raw recording from the Varicam LT.

“We are very proud and excited to break yet another industry convention by offering Raw recording for free from our great partners Sony, Canon and Panasonic”, said Jeromy Young CEO and co-founder of Atomos.

Atomos also reduced the price of its Ninja Inferno monitor to $995, bringing the power of 4Kp60 10-bit ProRes recording and HDR monitoring to the GH5. The information provided by Atomos suggests that “just as the original Atomos Ninja broke open DSLR filmmaking by giving the Canon 5DMKIII professional Apple ProRes recording & the original Atomos Shogun pioneered 4K with the Sony a7s and Panasonic GH4, the Ninja Inferno now arms the Panasonic GH5, the hottest camera of 2017, with HDR Apple Pro-Res 10-bit 4:2:2 4Kp60 over HDMI 2.0 –  a feat not possible internally on the GH5. This marks another incredible Atomos breakthrough – professional 10-bit color resolution, 4:2:2 color accuracy, high frame rate 4K 60p video resolution & all with the incredible brightness range that HDR delivers in PQ or HLG.”

“Our message to video Pro’s is to go HDR 4Kp60 today, as showcased by the GH5 and Ninja Inferno combo”, said Jeromy Young CEO and co-founder of Atomos. “For less than $3k it’s an unbeatable total package especially when considering having 4K HDR content ready for clients, Netflix and YouTube is a must”.