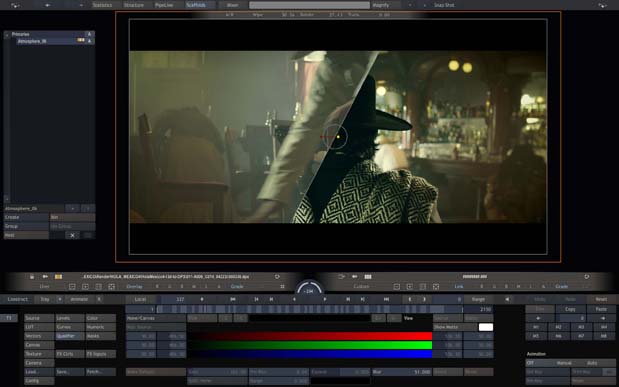 “SCRATCH v7 is a huge time-saver for me,” said Julio Macat ASC, the cinematographer behind blockbuster hits such as Home Alone and Wedding Crashers. “During our shoot of Universal Pictures’ Pitch Perfect, we used SCRATCH to do the creative DI. I found the SCRATCH DI session to be far more fluid and much faster than anything I’ve experienced before. With the savvy hands of Leandro Marini at the helm, we were able to do color timing side-by-side with items like object replacement, beauty work on women’s faces, and even some VFX – such as changing skies, adding assorted lens flares and creating or extending light beams from lighting instruments that couldn’t be practically photographed – right inside of SCRATCH. This was all quickly achieved without time delays, which can interrupt the creative process. The faster you go, the more DI work you can do. It was an eye-opening experience for me, and I know all directors of photography will fall in love with this way of working. Creative DI is a great step forward in helping cinematographers reach their visual goals, and I look forward to sharing what I’ve learned with my colleagues at the ASC.”

SCRATCH v7 is the first real-time, client-attended toolset in the industry to deliver a consistent, integrated user-interface across both production dailies and creative DI. This consistency offers a synergy between production and post-production that allows directors and producers of features, commercials, spots and episodic television to dramatically enhance creativity while significantly improving productivity.

SCRATCH Lab v7: The Power of Advanced Dailies at Your Fingertips

SCRATCH Lab v7 is leading the Advanced Dailies revolution by meeting the highly complex challenges of managing media and metadata from any number of different cameras into a single timeline, quickly syncing audio whether you have accurate timecode or not, color correcting and creating looks in real-time, and providing wicked-fast rendering simultaneously for many different deliverable formats for review and editorial — all on-location.

“The proliferation of digital camera formats is rapidly changing the world of dailies, and Advanced Dailies has become the new baseline in the industry,” said Duck Grossberg, DIT and colorist for such projects as The Life of Pi and Real Steel. “I’m now required to manage an entire workflow that includes multiple cameras, syncing audio and color-correcting clips, all on-location. I love SCRATCH Lab because it’s the only tool that allows me to organize my media any way I want — by card or reel, by scene and take, or by camera type — and then visually represent the whole shoot in one single timeline. And with Lab’s state-of-the-art look and color management, metadata handling, audio sync and rendering templates, I can crank out an hour of Advanced Dailies in less than 45 minutes. It’s incredible how fast and accurate it is to work this way.”

ASSIMILATE’s SCRATCH® real-time digital workflow and post-production tools have proven essential to the successful creation of thousands of major studio and independent features, commercials, television shows, music videos and corporate productions. Both SCRATCH and SCRATCH Lab®, running on Windows and Mac OS® X, are the heartbeat of today’s most demanding digital post-production and dailies workflows for 2D and stereo/3D productions.

ASSIMILATE is the premier provider of digital workflow and post-production tools, that have proven essential to the successful creation of thousands of studio and independent features, television shows, music videos and corporate video productions. The company’s SCRATCH products, running on Windows and Mac OS® X, are the heartbeat of today’s most demanding digital post-production and dailies workflows for 2D and stereo 3D productions. They equip directors, DPs, DITs and artists with the state-of-the-art, intuitive, data-centric solutions they need to meet the continual challenges of increased creativity and productivity amid ever-shrinking budgets. ASSIMILATE’s SCRATCH® data-centric DI system, is the most comprehensive, end-to-end cinema and broadcast imaging tool for playback, conform, editing, color grading, compositing and finishing of nearly all popular digital workflows, including, RED, ARRI, Sony F65, Canon 5D, Phantom, Go Pro and more. SCRATCH Lab® delivers a comprehensive toolset for the review, versioning, color correction, conform and output of on-set or VFX dailies. ASSIMILATE a privately held company, with headquarters in Santa Clara, California, USA, offices in London, UK, Groningen, NL and Beijing City, CN and markets its products worldwide via a global reseller network. To learn more please visit www.assimilateinc.com