In this version of Art of the Shot, I had the opportunity to talk to “Menashe” cinematographer Yoni Brook. Brook is a graduate of NYU’s Tisch School of the Arts, and an Independent Spirit Award-nominated cinematographer for “Vally of Saints” the feature film shot under military curfew in Kashmir. Premiering at the 2012 Sundance Film Festival, “Vally of Saints” won the Audience Award and Alfred P. Sloan Award.

As a documentary director, Brook’s films have premiered at the Tribeca Film Festival, Berlin Film Festival, True/False Film Festival, and International Documentary Festival Amsterdam (IDFA). Brook started as a photojournalist at the New York Times and the Washington Post, but today we talk about his latest narrative endeavor “Menashe.” Check its trailer below. Also, if you are in the Nashville area, which is where I live, “Menashe” is playing this week on Sept 12th and 13th at Green Hills Theater.

Since the filmmakers have done a tremendous job explaining their film to me I now share their thoughts with you. “Menashe” is set in the New York Hasidic community found in Borough Park, Brooklyn. “Menashe” follows a kind but hapless grocery store clerk who is trying to maintain custody of his son Rieven after his wife, Lea, has passed away. Bound to a traditional culture requiring a mother present in every home, Rieven is supposed to be adopted by the boy’s strict, married uncle, but Menashe’s Rabbi decides to grant him one week with Rieven prior to Lea’s memorial. Their time spent together creates an emotional moment of father/son bonding as well as offers Menashe a final chance to prove to his skeptical community that he can be a capable parent.

Here is the kicker, this film was “shot in secret entirely within the Hasidic community.” Yep, the culture found in the film is the same culture the filmmakers needed to navigate to successfully create their film. This is also one of the only movies to be performed in Yiddish in nearly 70 years, The story behind “Menashe” is based mostly on the real life of its Hasidic star Menashe Lustig.

Hallett: Your cinematography has a lovely documentary feel in this film. Tell me what camera and lenses helped you achieve this look? 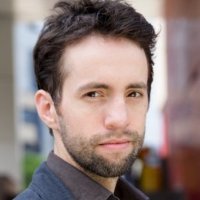 Brook: We shot “Mensahe” on the Canon C300 Mark 1. That was a choice dictated by the fact we were working with first-time actors. People who never acted but were very religious and in the community. They have never even seen a movie let alone acted in one before. So we wanted to have multiple cameras running at all times to get the best performance from everybody. I operated a camera and Josh, the director, would operate a camera to make filming as easy for the actors as possible. Also, some of our scenes were shot out in this community where having a camera is not a normal thing. We did a lot of work to get access to shoot out on the street. We wanted cameras and documentary cameras are not big cameras and that’s the reason why the camera we used was tangible for this film. Then the lenses we used were a whole bunch of different lenses. Lots of strange vintage lenses that we had accumulated from eBay. We shot with a few Canon lenses as well but most of the film was shot with a 35mm  and a 50mm. I couldn’t even tell what brand lenses we used. I think that the lenses were so old the brand identification had rubbed off.

Hallett: Why shoot with vintage lenses?

Brook: It was really based on the fact that we wanted lenses that didn’t feel super clean and to take the digital feeling away. So we wanted to find lenses with a little bit of character to them. The ones we used were like scratched, flare-y, smeary, and kind of interesting. That was why we chose the lenses that we.

Hallett: Do you feel like before with the digital camera cameras a little too sharp when paired with modern lenses?

Brook: We shot with the C300 Mark 1. We wanted lenses that would help soften the image and that had a little A bit of imperfection to them. I mean it’s like a very small feel story with a lot of the same interiors, or streetscapes, that you normally would never shot a movie on. We wanted lenses that felt just as intimate, personal, and not perfect so we really shied away from using conventional cinema glass.

Hallett: Let’s talk about the shoot. How many days were in production?

Brook: Man, that’s a good question. I don’t know. “Menashe” probably was shot off and on for two years.

Hallett: How did the C300 Mark 1 help you achieve the look you were going after?

Brook: I think the c300 was a good camera for us really because it has a pretty forgiving exposure range. We were lighting the rooms for actors so they didn’t have to hit specific marks so we wanted a camera that sort of had to be very forgiving for us. In terms of exposure, the C300 was a great choice. We wanted a camera that was low profile so we could have multiple cameras running and they wouldn’t overwhelm the scene. We also formally worked as documentary filmmakers. So we really knew the camera system and we knew that even with a very small crew we could make this film.

Hallett: How did you approach the scenes? 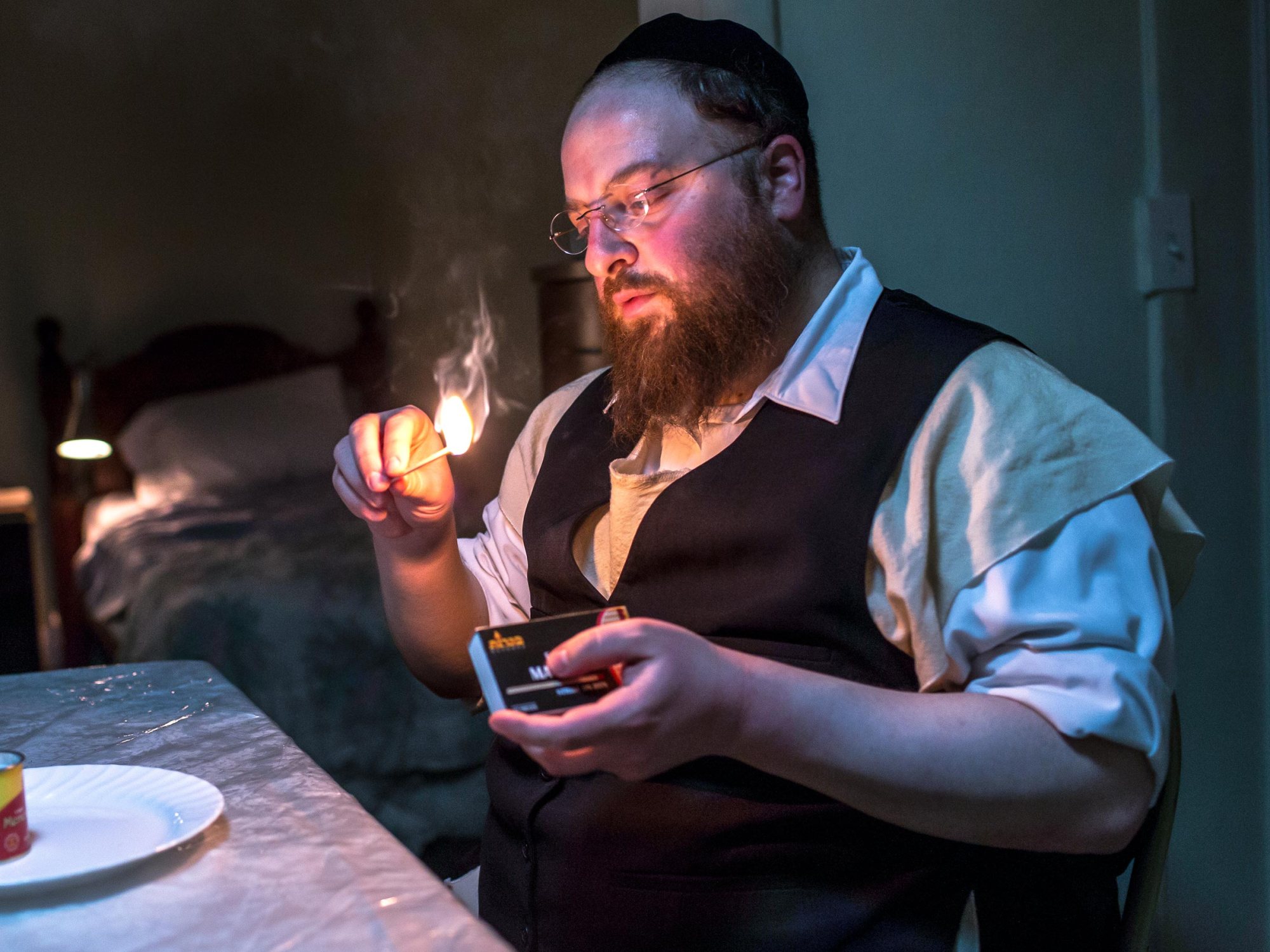 Brook: We kind of knew his film was only as good as the performances which included first-time actors. So I approached this film pretty different than I normally would. I was there when we were doing our whole casting process with the actors. I was running acting exercises where I was acting with our talent when we were auditioning them to really create a very small family feel so they wouldn’t be intimidated by the fact that they were going to be in a film for the first time. I think the first thing I did was make sure I had a really strong basis of trust with the actors because the film was only going to be as good as their performance and the performance was only going to be as good as the trust they felt from our team. We filmed in a very insular conservative community where you normally would not be allowed to shoot a feature film, but I have been making films in and around that community as a documentary film maker since 2004. Josh and I both had a strong familiarity with the code of ethics and attitude you have to have to film in this community. This type of filmmaking is different from traditional commercial filmmaking where you might be shutting down a street or telling people what to do in this film we weren’t doing any of those things. I think understanding the neighborhood that we were working in and the cultural context was really the most important thing as a DP. The other filmmaking stuff that we had to do was the other stuff every DP has to do when planning a film like establish a visual look, feel, and the color palette and all those things. We did our best to see that stuff but I think all that stuff is kind of not as interesting as what making a small budget film in that context was all about

Hallett: How did you get started in your career as a filmmaker?

Brook: I work primarily as a documentary cinematographer so I started out as a journalist working freelance for the New York Times and Washington Post. Then making my own documentary films has sort of given me the background and how to make narratives. I shot other films as well and in 2012 I had a film in Sundance which was nominated for an Independent Spirit Award for a feature film shot in a conflict zone with a non-professional crew. So I sort of had sort of a little bit of an affinity for doing that kind of work and also for working in a cultural context where the acting in a film isn’t taken for granted. I have made films in slaughter houses. I have made films in African royal courts and I have made films in India. I really enjoyed the immersive quality from that kind of filmmaking.

Hallett: How have you taken your experience and used it on “Menashe?” 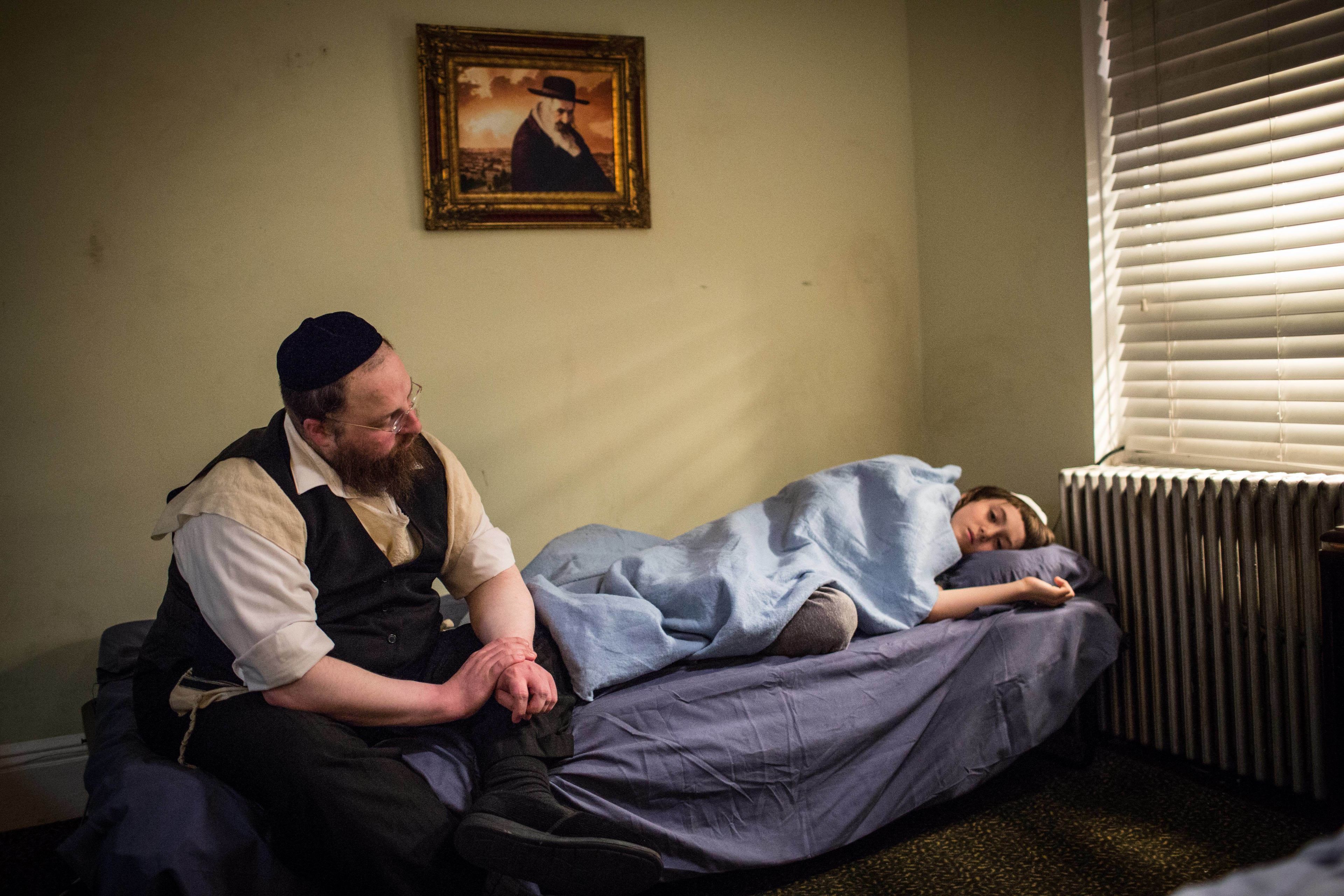 Brook: I think the biggest lesson from my documentary work being used on the dramatic or narrative films is to always ask myself “does this feel” the audience is discovering. Does it feel like we have kind of set up and staged? I’m always wanting to be like the people who are in the audience discovering its interesting character. I really want to hold that layer of discovery and connection and I think that working in documentaries kind of baked into that type of filmmaking. It’s kind of inherent because you don’t always know what you’re going to shoot or what you’re going to find. In narrative films, if you have a script you know what you’re going to shoot and there are some variables but overall where we’re already in control. Speaking for myself, I like to shooting situations where I don’t always know if it can happen a second time. I like a little chaos in of my control. So I think I’m looking for that and I try to bring that to my work.

Hallett: How important is it to know your camera.

Brook: I think it’s important. I think by the time you are filming a scene like the ones we face on “Menashe,” where we did not have a lot of control over the lighting, you need to know what your camera can do and can’t do. The fact that we had a familiarity with our cameras at that point and we had shot with those cameras around the world meant we knew exactly where we were going to get.  Honestly, I think the lesson to some filmmakers is not that you need to shoot on Canon cameras but you need to know your cameras well before heading out the door to go on a shoot. But even if I have to shoot on my cell phone I would try and shoot us such as if I could so I understood the inherent limitations found in the camera.