In a recent promotional video spot and photo, Apple features Josh Apter and his Padcaster in Iguazú Falls, Argentina.

Even though I know Josh Apter, the inventor of the Padcaster, I didn’t find out about this from him. I just happened to be on the Apple website for other reasons and saw their new promotion called Your Verse, which includes both still photos and a video spot. I noticed there was someone using a Padcaster in Iguazú Falls, Argentina, and then I looked closer and recognized that the man in the picture was Josh Apter. Ahead you'll see a still photo and a video. 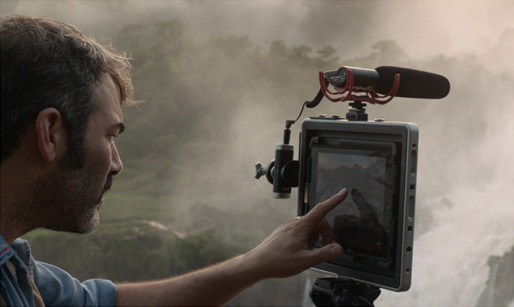 I asked Josh via email, and he confirmed that he was indeed in Iguazú Falls, Argentina shooting. I asked Josh what he was shooting, who shot him, and with what camera. However, he is currently not allowed to say anything else about this Apple promotion. However, he says that soon he’ll be able to share footage shot in footage in Argentina with a new iPad Air, mounted in a Padcaster for iPad Air. Here is one of Apple’s videos:

Other recent articles about iPad videojournalism