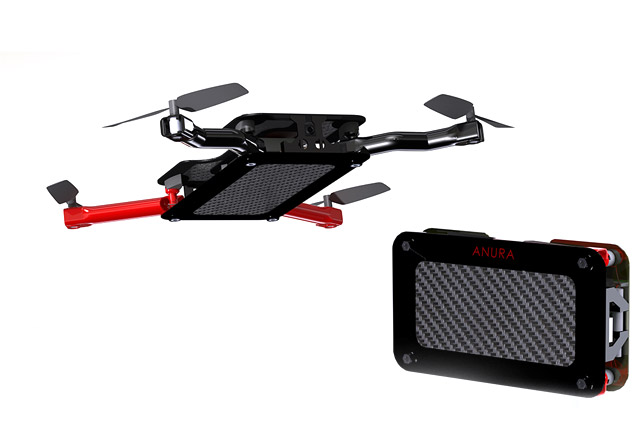 AeriCam Anura–Pocket size Drone24/7 is a new project on Kickstarter, with pre-order available from mid-October 2014. The new project from AeriCam will be pocketable and controllable through a smartphone. AeriCam expects the price to be under $200.

The team at AeriCam has been developing the concept for the last three years, and finally arrived at what they consider to be the right shape, size and weight for their pocketable drone. Closed, it fits in a large pocket; open, it looks a bit like a Swiss knife. Then, it flies!

The Anura will be controllable from a smartphone (IOS and Android) through WiFi. The Anura has a micro camera that transmits the image from the drone to the smartphone, allowing the capture of the exact image, either photo or video. AeriCam wants the pocketable drone Anura to offer AutoLand, Auto Take-Off, Return Home and Follow Phone if they reach a minimum of 1000 units sold.

Aericam  aims to  create solutions for aerial photographers combining stellar functionality with low cost,  when it comes to short-range, low-altitude aerial photography and video. Previously they launched on Kickstarter the AeriCam Hollywood, a revolutionary 3 axis camera stabilization system with line of attachments providing full house production capabilities in one package, with was successfully funded (Hollywood Gimbal Arrives in June) . The Anura fits into that concept and extends the use of drones for videography to a new level. If the Kickstarter campaign is successful, the Anura will fly soon.