The Annoying Orange has one of the more popular YouTube series with more than 800 million views, spawning imitators and reaching out with celebrity guests, merchandise, and an iPhone game. The cartoon looks a bit like a descendant of Clutch Cargo, but there's a TV pilot ready to be shopped around Hollywood according to an article in The New York Times, Animated Fruit With Ambition.  The article was top and center of the Business section and showed creator Dane Boedigheimer sitting in front of After Effects. 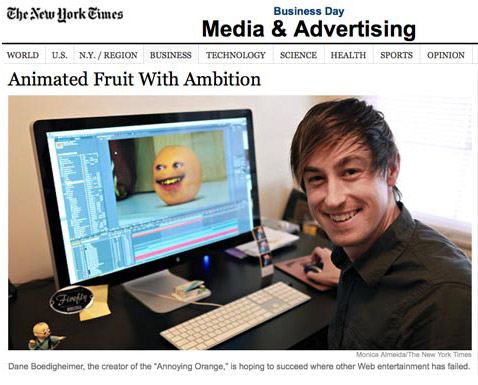 Last year in Put Your Face Onto An Inanimate Object at AEtuts, Alexander Dohr showed how to replicate this simple “face replacement” technique quickly and improve on the look. Robert's Productions also explained this type of animation in After Effects – Face on Inanimate Objects, which is embedded below.

For some more challenging shots, see Todd Kopriva's Face replacement with mocha from David Torno, on PVC tutorials by Torno about how he did tracking, compositing, and other post-production work for a music video (part 1 embedded below; part 2). The cmiVFX training Nuke Facial Replacement Techniques looks interesting too, and Fxguide has info on some delicate face replacement in Twice The Social Network.

Also useful is the Mamoworld's Monster Face and other resources (PVC article), which applies advanced tracking techniques from Mocha to modify a mouth and face in After Effects. Matthias recommends background in the popular Demon Face Warp tutorial by Andrew Kramer and his own Creating a Tracked Head Wound. More loosely related is How To Blow The Face Off A Zombie Pirate by James Whiffin and Film Riot Makes a Zombiemommy.

Resources in Lip Sync in After Effects, a roundup on AE Portal archive, may also be useful. Who knows, with all these skills, you could land a Hollywood job on Evil Bong IV.

UPDATE: Annoying Orange is now a Cartoon Network hit show! Here's background on how they use Adobe's Creative Suite to make the show.