Last Fall the good folks at motionvfx.com released mPuppet, a mesh warp plugin for Final Cut Pro X and Motion. At that time I was on the road in Brooklyn and I did a fun and rather silly demo (which you can see here). I wanted to do a follow-up, both to show a more serious application of this very useful tool and to explain the additional things you can do when using mPuppet in Motion instead of Final Cut Pro X: specifically, access to keyframe interpolation and the ability to work in 3D space.

On Facebook I discovered that George Edmondson was using mPuppet in Motion for a documentary project about the state of Alabama, where he lives. So we did a Skype chat which I recorded where he described his process in detail. Due to the low quality of the Skype video capture, I replaced all the video with my own local screen captures so you can really see what George is describing.

Separating photos into layers, cloning in missing pixels, and animating those layers in 3D space is not a new technique, but Motion makes it very easy and mPuppet, when used sparingly, can really bring photos to life in a very engaging way. I am working on a follow-up more detailed tutorial that explains exactly how you can apply this technique for your own work using an image editing application like Photoshop, Affinity Photo, or Pixelmator in combination with Motion and mPuppet. Let me know what you think of George’s application of this technique – it’s a stylistic choice that, if the YouTube comments are any indication, isn’t for everyone! Although I think in small doses with very subtle movements it can be a very effective way of adding more visual interest to photos, particularly historical photos where no film or video was available.

This week on MacBreak Studio, I demonstrate how easy and downright fun it is to animate a camera in...

This week on MacBreak Studio, I take you “under the hood” to peek at our development process for a...

This week on MacBreak Studio, I show you how you can use Motion to create a levitation effect. This... 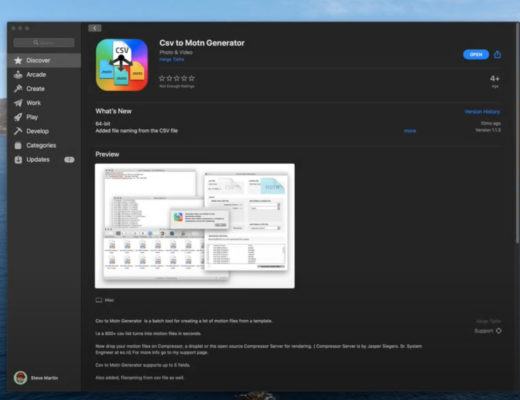 Have you ever needed to generate the same graphics over and over with different text? This week on MacBreak...