A Swiss Army knife for animation of all kinds. 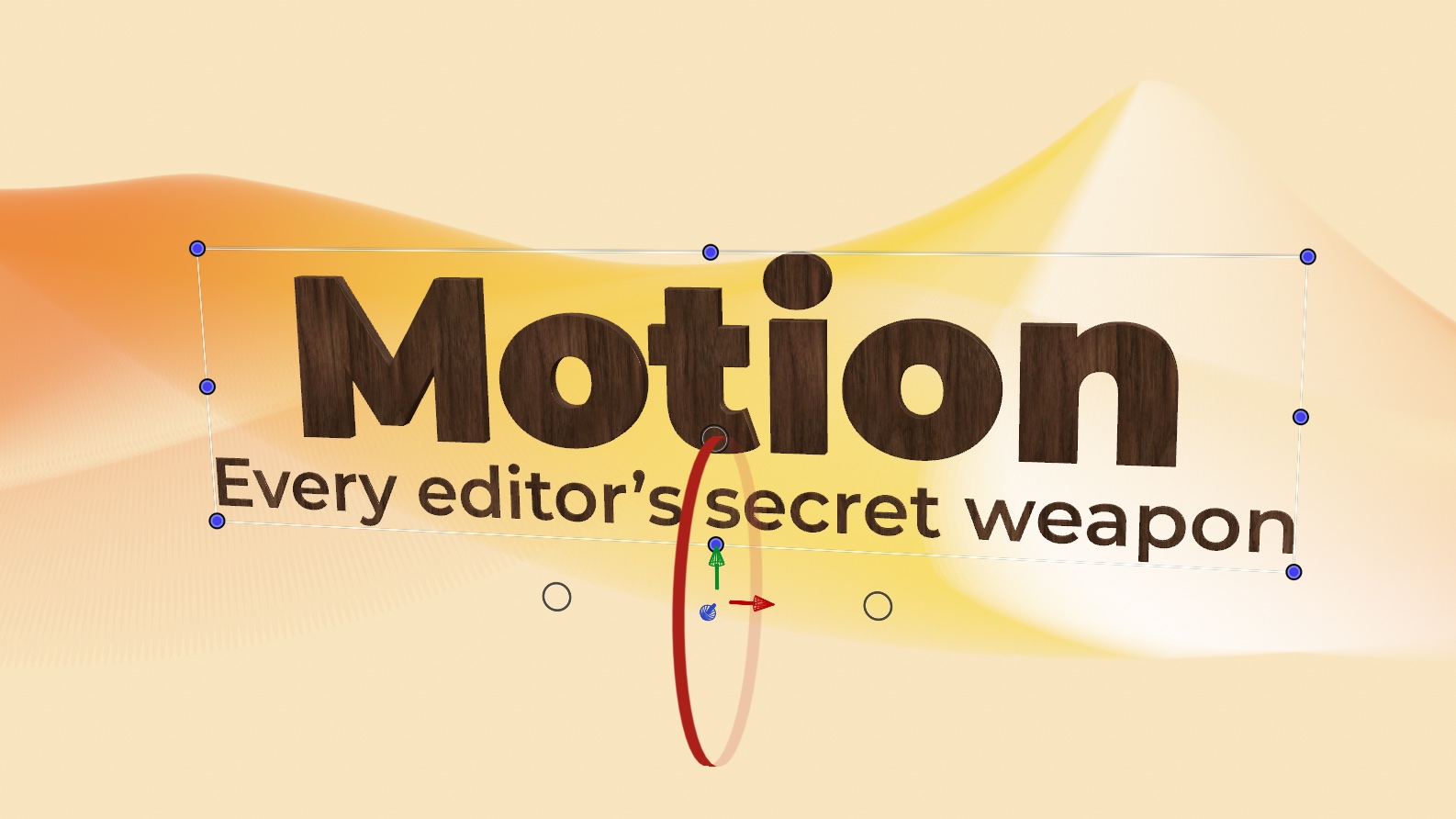 In the Final Cut Pro ecosystem, Motion is the app that lets you create custom titles, effects, generators and transitions, and then use them live on your timeline in FCP. On the Adobe side of things, MOGRTs have only copied this feature in the last couple of years, and that’s truly surprising, given how much all the NLEs borrow features from one another.

While the uses of Motion are more obvious to Final Cut Pro editors, if you cut with a different NLE, there are still many reasons why you might want to keep this app in your back pocket.

Besides the FCP integration, Motion is also a real-time animation app with full support for keyframes and a dynamic indirect animation method called behaviors. There are all kinds of fancy features available, including nearly unlimited resolutions, 3D text and USDZ objects, and even 360° support.

Imagine 80% of the features of After Effects, but much faster, with a better interface, and a few extra tricks on the side. How much faster? To test, I took a third-party effect, Yanobox Nodes, picked a preset, popped it in a 2160p30 composition in AE 2022, and it wasn’t too bad on my MacBook Pro 16” with M1 Max, but (running via Rosetta) it was jerky, even after the pre-render. The Apple Silicon AE beta did a bit better, but freaked out with RAM issues pretty quickly and then wouldn’t play at all (forgiven, it’s a beta).

But the same preset in Motion, with no pre-rendering, played totally smoothly in Motion, live, the first time. And just for fun, I upped the resolution a few times — it still plays totally smoothly (30fps) at 8000x5000px. That’s an utterly crazy speed boost, the kind of difference that makes it easier to be creative.

Prior knowledge counts, though. If you’re already an After Effects expert enjoying the recent speed increases, you’ll likely stay with that app. But for anyone who doesn’t know AE, Motion is a faster, easier-to-learn option for any animations that your NLE isn’t good at.

And it’s just $50. To be clear, that’s a $50 outright purchase from the Mac App Store, not a subscription, and upgrades are free too. Apple’s best software bargain. So how does it work?

If you’ve ever used a keyframe, it’s not hard to get started in simple 2D animation with Motion. There’s a Layers pane that’s a bit like Photoshop’s layers, and a Timeline that’s like After Effect’s timeline. There’s an Inspector like Final Cut Pro’s Inspector, where you can change all kinds of parameters in a predictable way, and you can drag on the numbers to change them just like the Adobe apps let you.

You can group things together (many levels deep if you wish) just like in every graphic design app you’ve ever used, and you can edit the parameters of a group or the items inside it easily. Every time I use After Effects I’m shocked that it doesn’t support the simple concept of grouping, because pre-comps and parenting are no substitutes.

While you can edit keyframes in a dedicated pane, experienced users tend to go for Behaviors instead. If you think of keyframes as the hand-made experience (controllable but tedious) and After Effects’ Expressions as automated (but requiring programming knowledge) then most behaviors sit somewhere in between. They’re easy to understand, and much more powerful than single keyframes.

Behaviors can automate many kinds of animations, such as movement, fading, reframing, and physics simulations like attraction, but they require no programming knowledge. If you’d like to get your hands a little dirtier, Motion also offers parameter behaviors, applying maths rules (like oscillations) to properties in a slightly more direct way. Still, this is an app built for animators rather than coders.

Motion is also an app built for real-time speed. While After Effects has certainly improved a lot recently, Motion is still in a different league and takes advantage of the latest Apple hardware. During playback in the app, you can adjust parameters without pausing, let alone without rendering, and that live feedback loop is simply a better way to work. While you can render if you need to, there’s never a multi-gigabyte mess of temp renders to clean up.

Let’s take a look at a few specific use cases.

Still logos and other artwork

While it’s not immediately obvious, if you need to assemble a logo from geometric shapes and text or start from a PNG, SVG or PDF, Motion’s capable, and can then export to a high res PNG or JPEG. You can use filters to add glows or shadows if you wish or add new drawn elements with the built-in vector toolset. If you need to update a client’s logo, you can mask out part of it and add new text in its place.

I’ve also used the superb Yanobox Nodes to create high-resolution techy-looking background artwork for print design purposes — it looks great, and it’s much faster in Motion than in After Effects. While there are plenty of other capable design apps out there, Motion’s actually pretty good at it too. Animation is optional.

If you need to create a screen recording to play on a display, you’ll find it hard work in an NLE. If you can’t actually record a screen, you’ll find that the elements add up quickly, and getting the timing right can be tricky. But it’s not too hard in Motion. Import still images of UI elements, position them where you need them, group them together into windows, then move them as you need.

If you’re not planning on popping it into a real screen, you can offset your elements in 3D space, then sweep a virtual 3D camera around your scene instead. Makes clients happy, not hard to do, tricky in an NLE.

Many moons ago, I worked on a TV show that was cut on Avid, but my job was to add a few special effects (faerie sparkles!) and motion graphics elements, and (predictably) I did them in Motion. But I also created the show-ending scrolling credits in Motion. While the Avid suite choked on some of the logos, Motion coped just fine and could output an interlaced, broadcast-friendly scroll with no problem.

Throw as many text boxes and images as you need in a single group, then use a behaviour to move it upwards — it’s a much easier workflow than creating gigantic images in a design app. Handy indeed, and you might not need any keyframes at all.

While many NLEs can support arbitrary resolutions and frame rates, Motion does whatever you want. While FCP and Premiere can handle the most common frame rates (23.98-60fps) and Premiere can also go lower (to 10fps), Motion can work with frame rates from 10fps to 120fps. If you want to push your new MacBook Pro with M1 Max, Motion’s where it’s at. I’ve used Motion to create stadium animations with very weird sizes (2000x96px) and it doesn’t miss a beat. There are no rules.

Accessing the world of FCP templates outside of FCP

Because the FCP-Motion workflow has been so good for so long, there are hundreds of great templates available for opening sequences, special events, lower thirds for every occasion, and many specific kinds of videos. Many FCP editors regard this as a secret weapon, as it’s just far more time-efficient to buy a template for $70 than it is to take a week to build something equivalent.

There are plenty of providers out there, but motionVFX and LenoFX are probably my favorites. Because just about all their templates are made in Motion, they are editable in Motion and can be rendered in Motion, even without Final Cut Pro. Yes, there are After Effects templates out there too. But these are great and built to be edited. If you can’t work in FCP, at least you can enjoy the titles.

Motion’s replicator feature doesn’t, surprisingly, have a direct equivalent in After Effects. Take any object, repeat it in a grid, or a line, or a wave, or randomly in a 3D space, and then propagate some kind of transformation through the cells. If you draw a line and then replicate a few thousand copies, distribute them along a wave, assign a gradient, and then animate a couple of properties, you’ve just made a very cool wave, similar to what Sony did on the PS4 home screen. (This also plays in real-time.)

Similarly, you could create a lit disco floor, repeat your client’s logo around a circle, randomly distribute the frames from a video around a 3D space… it’s a bit nuts and a lot of fun.

If you need to set something on fire, but not for real, the built-in Pyro presets are waiting for you. Change a few settings, or not, then export them to ProRes 4444 with alpha channels for use wherever you like. The creators of South Park did this a couple of decades ago to generate the explosions used for at least several years. If it’s good enough for those Oscar nominees, it should be good enough for you, right?

Because USDZ models are fully supported and can be positioned (and lit) in 3D space within Motion, you can create fly-bys around 3D objects — without needing to understand Blender. USDZ is a newer, open format that all Apple devices can display, and Motion is the app that gives you the most control over how it looks. Sure, you can display an object and spin it around. And yes, you can fly a camera past it. But you can also replicate it, so you have not just one robot, but an army.

For a mind-bending example of the potential quality available, head to Apple’s page about their new Mac Studio, then peek in the source code, search for USDZ, and figure out the URL and download the file. You can then import it into Motion and like a camera around like you have a motion control rig — the model is just amazingly good.

Visual effects that respond to audio

While it’s very cool that you can create an animation in Motion and then control its settings live in FCP, it’s not possible for that animation to respond to audio from the FCP timeline. But… if you bring the video clip into Motion, you can allow the audio in the clip to drive some aspect of the animation — scale, position, rotation, color, whatever you wish. You can even isolate specific frequencies and attach them to different elements. A live EQ effect is within reach.

On the more obscure side, Motion can actually be set to respond to live audio input and also to live MIDI input. It’s tricky, but it works. VJ on!

Motion is a spectacular, versatile app that every Mac-using editor should have in their toolkit. It’s obscenely cheap for what it does, and it does a lot. If you’d like to read more about it, you’ll find plenty of articles here on ProVideoCoalition, and if you want to learn much more, you can find video courses by Mark Spencer at RippleTraining.com or by me, Iain Anderson, at macProVideo.com. Enjoy!