Dean Semler ASC, ACS; Rodney Charters, ASC, CSC; Robby Müller, NSC, BVK; and Curtis Clark, ASC will be honored by their peers during the 27th Annual American Society of Cinematographers (ASC) Outstanding Achievement Awards to be held February 10 at the Hollywood & Highland Grand Ballroom. Semler will receive the 2012 ASC Lifetime Achievement Award; Müller will be presented with the International Achievement Award; Charters gets the Career Achievement in Television Award; and Clark collects the President’s Award. 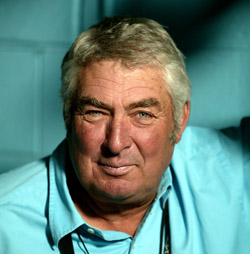 “We are thrilled to be honoring this extraordinary group of artists,” says ASC President Stephen Lighthill. “Each of these individuals has made an indelible impact on our profession, and the industry as a whole.”

Semler earned his first narrative credit for Let the Balloon Go in 1976. He went on to earn critical praise for his innovative camerawork on a string of successful 1980s films, including Mad Max 2: The Road Warrior, Mad Max Beyond Thunderdome, The Lighthorsemen, Cocktail, Young Guns and Dead Calm. In 1984, Semler won an Australian Film Institute Award for Russell Mulcahy’s thriller Razorback. Semler went on to earn an Oscar® and an ASC Award in 1991 for his magnificent imagery in Kevin Costner’s directorial debut Dances With Wolves. In 2007, his work on Mel Gibson’s Apocalypto earned him a second ASC Award nomination. Semler is a Member in the General Division of the Order of Australia, appointed by Her Majesty Queen Elizabeth II for services to the arts, an honor bestowed upon him by his fellow countrymen. The sought-after cinematographer has collaborated with such seminal directors as George Miller, Peter Segal, Randall Wallace, Roland Emmerich, Tom Shadyac, and Phillip Noyce, among others. Semler’s nearly 70 feature credits include such memorable films as City Slickers, Last Action Hero, Waterworld, The Bone Collector, We Were Soldiers, XXX, Bruce Almighty, The Alamo, Get Smart, 2012, Date Night, Secretariat, Angelina Jolie’s directorial debut In the Land of Blood Honey, and the upcoming Parental Guidance and Maleficent.

“Dean’s creative prowess is seemingly limitless,” says ASC Awards Committee Chairman Daryn Okada. “His long list of impressive credits has defined a generation of cinema. Dean is consistently innovative, and is always outdoing himself from film to film. While we recognize his tremendous contribution to our art form, we will keep an eye on the future and highly anticipate what he will create next.”

Müller is a native of Holland, and spent five years as assistant to Dutch cinematographer Gerard Vandenberg. His collaborations with Wim Wenders began in 1969 when they made the short Alabama: 2000 Light Years From Home. The two went on to create such classics as Summer in the City, The Scarlet Letter, Falsche Bewegung, Kings of the Road, Alice in the Cities, The American Friend, Until the End of the World and the 1994 Palme d‘Or winner Paris, Texas. Müller has earned Independent Spirit Award nominations for Best Cinematography on Down By Law (1986), Barfly (1987), Mystery Train (1989), and Dead Man (1997).The list of Müller’s seminal credits is long and includes Lars von Trier’s Dancer in the Dark and Breaking the Waves, Alex Cox’s Repo Man, William Friedkin’s To Live and Die in L.A., and Jim Jarmusch’s Ghost Dog: The Way of the Samurai.

Charters is a graduate of the Royal College of Art in London. He began his career primarily working on documentaries. He spent 15 years traveling the world — shooting in locations such as the jungles of South America and in the Soviet Union during the Cold War. Charters eventually segued into the narrative world, shooting features and television. The New Zealand native earned a Gemini Award nomination for his work on the telefilm TekWar in1994, and grabbed two Emmy® nominations for his work on the acclaimed FOX series 24 in 2005 and 2006. Charters has brought his talent to the sets of such notable series as Nash Bridges, The Commish, M.A.N.T.I.S, The Pretender, Roswell, Shameless, Dallas (2012), and Nashville. His television movie credits include Deadly Vows, Conundrum, A Ring of Endless Light, Sounder, Pixel Perfect, A Very Married Christmas, An American Girl on the Home Front, Night Life, and Washington Field. In addition to shooting, Charters is a member of the Directors Guild of America, and has directed 11 hours of episodic TV.

Clark’s feature film credits include such critically-acclaimed narrative films as The Draughtsman’s Contract, Dominick and Eugene, Alamo Bay, Extremities and Triumph of the Spirit He has hundreds of commercial credits working with cutting-edge directors and ad agencies. Clark has served as the chairman of the ASC Technology Committee, which both investigates and influences the development of emerging technologies that impact filmmakers. Under Clark’s leadership, the ASC Technology Committee has become an important industry forum that has achieved a series of notable successes including its collaborative work with the Digital Cinema Initiatives, LLC (DCI) to produce standardized evaluation motion picture content for assessing the performance of DCI standards-based digital cinema systems. The Committee has also developed a groundbreaking cross platform data exchange for primary RGB digital color grading referred to as the ASC CDL (Color Decision List). The acceptance and implementation of the ASC CDL by the industry has been widespread, and it’s been recognized with a 2012 Primetime Emmy® Engineering Award.

For information regarding the 27th ASC Outstanding Achievement Awards visit www.theasc.com or call 323-969-4333.

(Oscar and Academy Award are registered trademarks of the Academy of Motion Picture Arts & Sciences.)

(Emmy is a registered trademark of the Academy of Television Arts & Sciences.)