I rarely ever make a blog post these days about someone’s Vimeo or YouTube video but scrolling around Twitter today this video from feature film editor Alan E. Bell A.C.E popped up and it’s right up my alley. Alan has edited some of the biggest features out there (The Hunger Games Trilogy, Red Sparrow) as well as indie features too (500 Days of Summer) so he has sat for long, long hours trying to make sense out of a mountain of footage.

Here is an open letter to @MediaComposer @AdobePremiere @Blackmagic_News @Apple These are some feature that I think are long overdue. https://t.co/x381T6YRdj

When you edit for any length of time you quickly come to realize the shortcomings inherent in your NLE of choice. No two editors work exactly alike so every editor has their own opinions on what they want their NLE to do but what I’ve come to realize is that the software engineers often think they know best. They might not understand why some small tweak might save hours and hours in the edit because it’s something small that you do over and over and over again. They might not realize how an interface design change make the software more pleasant to stare at for hours on end therefore making the editor less tired throughout the day. And they might not get how allowing an editor a choice when doing something is a good thing because, again, no two editors work the same. That’s one reason I love Adobe Premiere Pro, there are multiple ways to do many things.

The flipside of this is that we editors don’t really understand software design and how a simple feature request might be big engineering hurdle and one change or fix here might change or break something there. I suppose that is true but it’s software …. you can make it do anything!

I don’t know how well that Twitter embed above will play the video so here it is again:

I remember sitting in Atlanta with Alan years ago talking about some of these ideas. Some are quite radical and would require a big engineering change deep with the NLE. And some of those changes would suffer the wrath of long established editors who don’t want any change in their NLE. EVER! But others are  simple enough that it’s hard to believe they haven’t been implemented.

Let’s talk about a few of them. 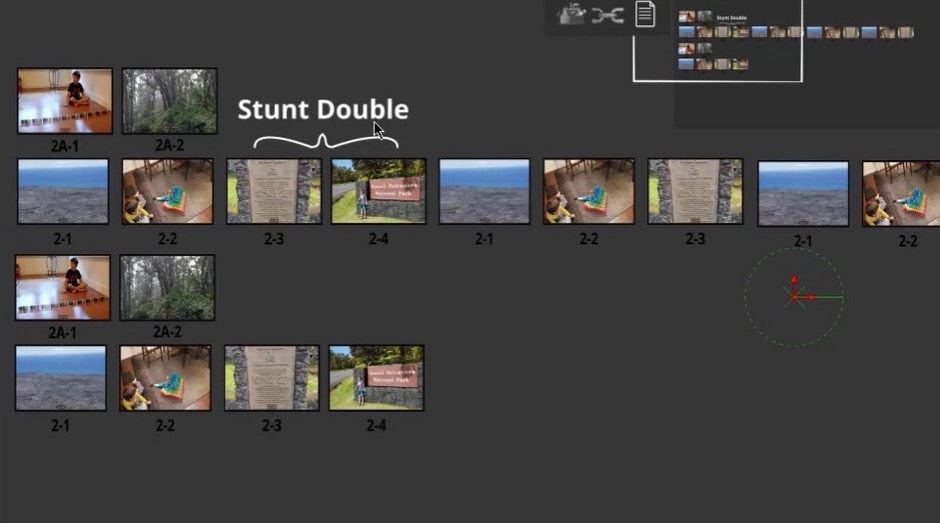 Being able to mark up clips in a thumbnail view would be great as the visual information that something as simple as the stunt double markup above gives the editor shouldn’t be underestimated. Yes you can do this via metadata with comments or notes in a list view but often those columns of list view text all run together after a long day. What Alan is asking for is some way to mark up that media in an icon or thumbnail view and make it visual, something that not any NLE I know of has achieved.

A built-in notepad in the NLE is such a simple idea that I can’t believe no one has implemented yet. I pleaded for just such a thing a few years ago and while we did get the Postnotes extension for Adobe Premiere that developer seems to have closed up shop. I think maybe this isn’t the type of thing people will pay for but it if was part of the NLE it would be used a lot. Sure you can use Evernote or Word but a different app is a disconnect from editing and the editing tool. This idea integrates them.

I’ve talked about similar ideas for our NLEs before with Software from the Future. Live scrubbing became skimming and Hover Scrub. Marker pop-ups popped up in Premiere. I’m still waiting on the proper Watch Folder.

A lot of what Alan talks about are ways to get more information about our media. Yes metadata is great but what I’ve come to realize as we get deeper into metadata is that so much of it is just lines of text and while lines of text is okay, visual ways to interface and interact with that metadata is something that hasn’t really been explored just yet. We see software companies like Intelligent Assistance creating a lot of tools around metadata and that is just scratching the surface. We’ve seen Final Cut Pro X taking metadata to new levels in the NLE but we still can’t do things like Alan is describing above.

I know some people are saying … Hey, Final Cut Pro X did rethink the NLE!! And that’s right, it did and FCPX does some amazing outside the box thinking but I don’t quite see it implementing some of these types of things that Alan talks about above as they might not appeal to the average editor working on short form content. It seems to me that Blackmagic is in the best position to implement some of these wild and crazy ideas with Resolve’s editorial page. They don’t have a legacy user base to keep happy as far as editing goes. They have proved they are open to ideas. And I’m guessing they have plenty of engineers working on Resolve as they are pumping out updates like crazy. Maybe BME will be the one to do it!

Here’s a few tweets that expand on Alan’s video with some nice feature requests.

Along these lines, I filed a feature request in the beta forums for flowchart-like frame view features 2 years ago. Got some upvotes but no comments or reply from Avid. pic.twitter.com/7evsNTXwqA

Follow Alan on Twitter and let him know what you think. He’s also done some videos on Fusion that I bet are getting a lot more play these days including this one Node based compositing for editors.