While editing very large job the other day I had an idea for a new NLE feature that would be a great addition our editing applications. How about a notepad built into each NLE that lets an editor take project specific notes that would open up and travel with a project. Seems simple enough. I can’t believe none of the major 3 NLEs have this.

While editing on a very large job the other day I had an idea for a new NLE feature that would be a great addition our editing applications. How about a notepad built into each NLE that lets an editor take project specific notes that would open up and travel with a project. Seems simple enough. I can’t believe none of the major 3 NLEs have this.

You first reaction might be there are already many options for taking notes while editing, we don’t need a specific feature for this. Sure, but a well integrated notepad could be so much better.

The first obvious place to take notes would be the NLEs Markers or Locators tool. This is a handy tool that all NLEs have, and most include a nice list view to see all comments at once, but the comments travel attached to a clip or edit sequence so they are hardly a project-wide way to make notes, even if they are searchable.

What about any of the hundreds of note taking applications on the many different platforms like Evernote, OneNote or Notability? These apps are all great but they are external from the editing project and bring up several problems that an in-NLE note taking feature could solve: they move you out of the NLE both physically (on the computer that is) and mentally, they don’t change when your project changes, they have to be open and closed separately and they can’t display information about the project in context.

The Evernote extension lives in the Mac menubar and can take notes at any time. Something like this would be ideal in an NLE where it would always be accessible and ready to take notes. Bonus points if a keystroke could drop it down ready for typing or ready to accept a frame of video.

What would an in-NLE note taking feature look like?

I see it as a pop-up scratch pad that can be accessed via a keystroke (though a menu item would be there as well). Depending on the NLE it could be an additional window, palette or tool that pops up with the cursor blinking ready to enter text. This data would then live with the project and be accessible no matter which sequence or timeline is loaded. At the very least it’s just a place to type some text.

Adobe Premiere Pro CC seems an easy tool to implement a notepad. All we need is a new panel and a keystroke to send items, open it up and dock it where you please.

Where an NLE Notepad would really shine is if you could enter video specific data that is more than just text. Since video is made up of images and timecode I imagine a menu command that could send a still frame and timecode reference to the Notepad with a place to type a note about that clip. Accessing a note and image frame later in the Notepad would send you to that specific clip at that specific frame loaded into the source monitor or viewer. If it came from a master clip you would go there. If it came from a timeline you would go there. 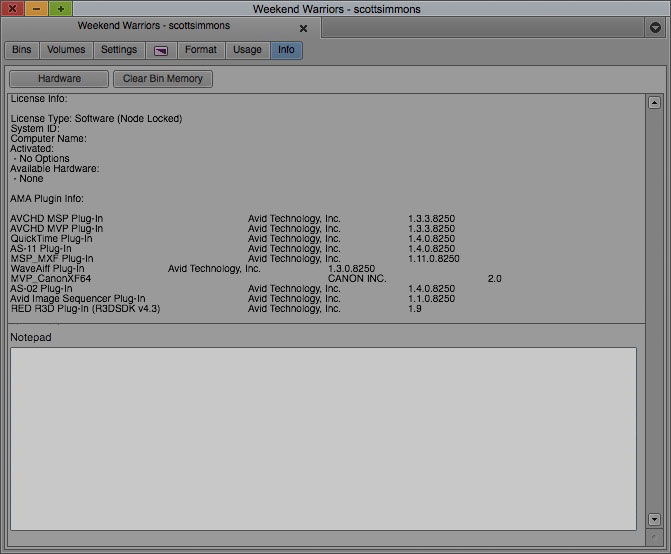 Avid Media Composer has the Info tab in the project window. How hard would it be to at least let us type some project notes there? 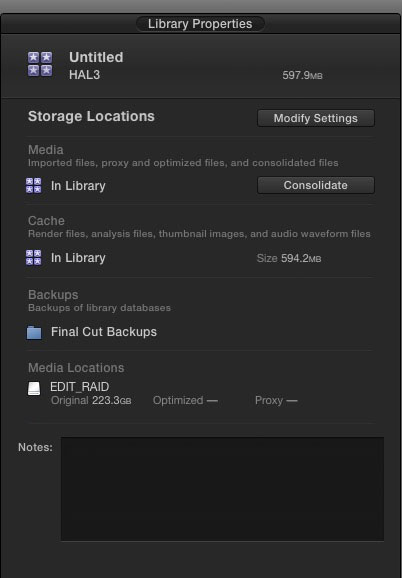 The Final Cut Pro X Library inspector seems like a natural place to keep Library specific notes in FCPX but I bet if Apple put their minds behind a notepad for FCPX they would come up with something unique and quite cool.

An editor would begin to find more uses for a Notepad the more it was integrated into the NLE. It might even be a good place to store a short audio take between the IN and OUT points for quick retrieval later. Sure we have subclips and keyword collections for that kind of thing but I often find myself not wanting to clutter up a busy project even more by making new subclips in a bin or storing things like that at end of the timeline or on a disabled upper track. And I have to admit I might forget about them. 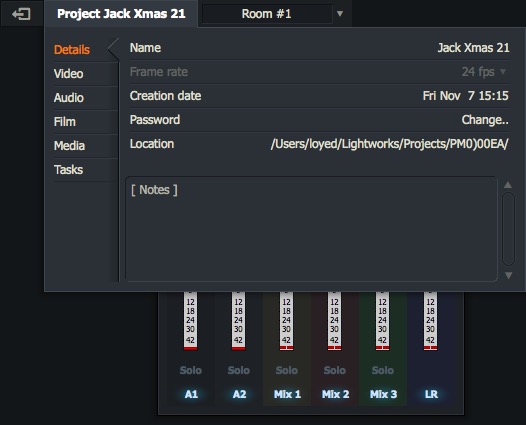 Lightworks actually has a little place to make notes in the Details tab so that image above is not a mockup. I’m not sure if Autodesk Smoke or Sony Vegas have such a thing.

One thing I often create is a specific bin for storing those cut clips for later retrieval. They can be subclips of great shots, lines of dialog or music clips I want to try. But as I mentioned above the neat freak in me often feels like I don’t want to keep cluttering a busy project with even more bins and clips. Sure this is part of editing but it’s often fine line between organized and disorganized as projects grow in size and complexity. At its simplest level an NLE Notepad would just be strings of text stored with the project. At its most complex level NLE Notepad would just be a reference back to a frame of video or audio in a project. No additional mess created.

Is a third party developer coming to the rescue?

A tool worth keeping an eye on is Post Notes. While in its infancy Post Notes is building a panel for Premiere Pro that lets you take notes right in the application. Here are a few screenshots with some notes from the developer about what they are planning. Remember that this is from an early prerelease build so it can change.

Start up screen when panel is launched.

When both Notes & ToDos are active.

As you check items off completed items filter to bottom. We plan to have a “done” page to the ToDos so they get out of the way completely. You can also click to rearrange the items or delete from the list as well as simple text input for notes.

You can also use it as note pad only.

Each Notepad and ToDo list is connected to a specific sequence. That way, you can have notes and todos for cut 1 differ from cut 2. We also plan to have a generic “Master” note pad that is not connect to a specific sequence. That will be the default notepad that comes up. My use case would be collaboration. You can leave notes to other people opening the project or yourself.

Some other notable features that Post Notes is working on:

That’s some exciting stuff. I don’t know how easy, difficult or even possible it would be to build Post Notes into other NLEs (we’ve seen some great Premiere Pro panels already) but if they can do it then more power to the folks at Post Notes! Follow them on Twitter to keep up with the development.