Here we are in early 2016 and ProVideo Coalition has relaunched under new ownership with an updated website. That’s as good a reason as any for a new Useful Tools For Editors (which would be the second New Website Edition after one last year), so here we go.

Last fall I wrote a Feature Request about an idea to have a notepad built into the NLE. That article mentioned the upcoming Post Notes, an Adobe Premiere Pro panel that was coming as a way to notes right inside PPro. Post Notes is now alive and shipping and selling for $10.

I’ve been playing with Post Notes for awhile now and it’s nice to have this right inside of Adobe Premiere Pro. It’s both a notepad and a to-do list. If you work on a lot of jobs at once in PPro it’s worth the price just for convenience and not having to put every note into a Marker. As you use it there will be functionality that you’ll probably wish for (as noted in my NLE notepad article linked above) but some of that is probably limited by the Premiere Pro panel architecture. But the Post Notes folks will be developing more so get your feature requests in.

If you’re working with VR you might already know Mettle and some of their VR tools for After Effects. They’ve also just released the Skybox 360/VR Tools for Premiere Pro as well. 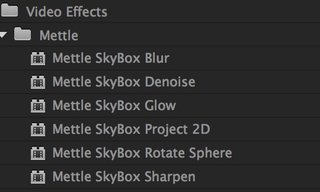 The effects show up in the Premiere Pro Effects tab. Add to your footage and tweak the controls

These are plug-ins designed to ease some basic editing functions like adding text and logos to VR scenes as well as creating seamless effects like blurs and glows. If that seems simple it’s important to know that even simple operations like pan or tilt might not end up the way you are expecting when working in VR.

A lot of tools like these often begin in After Effects but it makes sense to have them Premiere. As VR moves beyond just a single-shot curiosity where content creators are telling stories VR will be more than just watching a shot or two in VR space. That will require longer and longer projects in editorial where After Effects just won’t cut it.

Offload and Hedge … to backup those shooting cards

As an editor I don’t often have to backup cards from a shoot. But I did the other day and had a chance to use Red Giant Offload for the first time. At $100 it’s a very no-frills way to backup media to multiple locations, with verification. There’s something to be said for speed and simplicity when it comes to single focus tools. I was a big fan of Bulletproof but its complexity came with a much steeper learning curve and it eventually died. Offload took its place as a way to … well … Offload. 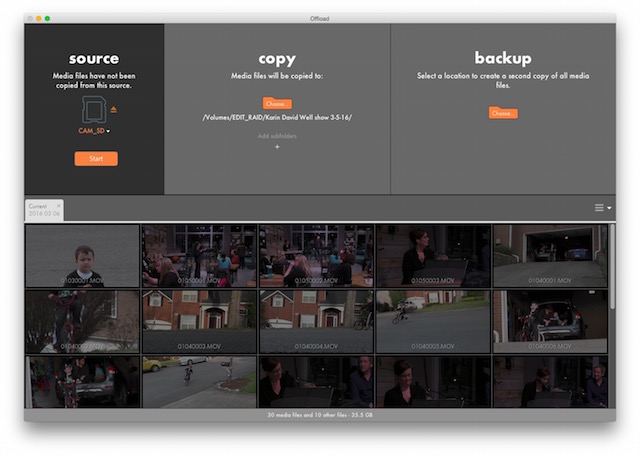 Plug in your media card and Offload sees it as well as giving you a thumbnail for each clip. 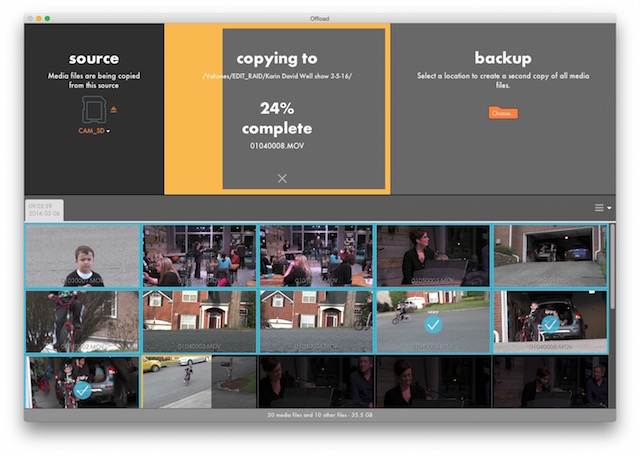 A progress bar shows how far you’ve come in the process and which clips you’ve offloaded thus far.

You can choose a second backup location as an option as well. While I did love Bulletproof the speed and simplicity of Offload makes it a must have in the shooter’s toolbox. I think I’m going to experiment with using it to just copy media between hard drives.

Hedge is a new copy and backup tool coming onto the market from The Sync Factory. They are taking a bit of a different approach to backup. While Hedge does the usual tasks of backing up to multiple locations with verification it’s a free product just for backing up. 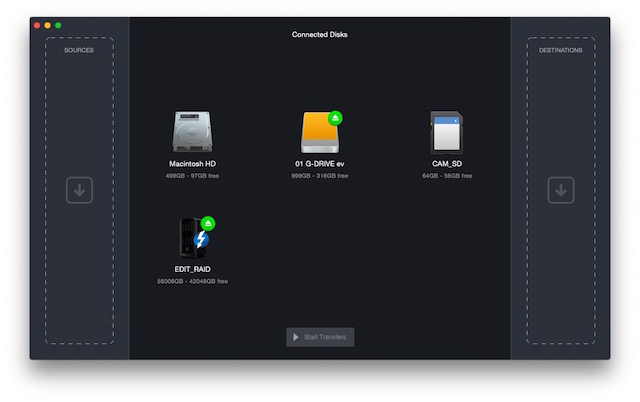 Backup is simple, drag the source to the left, the destinations to the right. Hit start.

Where it begins to differ is that Hedge is going to offer a subscription model for added functionality. According to the website it’s free forever for up to two simultaneous transfer and $15 per month for unlimited simultaneous and automatic transfers.

I think whole toolset for Hedge is still be formulated as there is a lot of added functionality the developers are looking to add. It’s unclear if this functionality will be part of the paid tier but keep your eyes on the Hedge website and sign up for the newsletter to be notified when it officially launches. I was using a beta for my offloads. Between Hedge and Offload I think Offload was a bit faster but ultimately the did the same thing.

UPDATE: Hedge for Mac has officially launched. PVC readers can take a 33% discount with this special link.

We’ve seen how to use any MIDI controller as a video controller in editing software here on PVC but if you want to take the MIDI protocol a few step beyond that then you might be interested in this MIDI controller solution for DaVinci Resolve.

This is not a plug and play solution as it looks to require a bit of work and expense beyond what the creator is selling but if you’re a DIY kind of colorist then it looks like a cool solution. Considering the controller he is using costs over $200 you might just wait for the Tangent Ripple.

If you’re a user of Final Cut Pro X and don’t have this resource of everything free for FCPX bookmarked then do that now. If there’s one thing that FCPX has going for it it’s that there is a huge base of users, creators and fans out there making free plugins, templates, tutorials and more. And FCPXFREE.com is trying to catalog them all. No other NLE out there can claim such a large amount of free resources available. And now in one website.

This is little utility that uses Python to run a script to backup a DaVinci Resolve database every couple of hours. I’m not aware of the bug that it says can corrupt a Resolve database but if you’ve experienced it then a small tool like this might be useful.

There’s actually several interesting tools on the HDHEAD site including Avid Media Composer Crash Alert that will email or text “to an unlimited number of recipients when Avid Media Composer running on Windows or OS X is terminated by crash or a user action.” That might come in handy on those overnight exports and renders.

Hey did you hear that Deadpool was edited on Adobe Premiere Pro CC? No? Then read these two ART OF THE CUT articles about the process to learn more.

You can also get some of that Deadpool goodness by downloading a batch of handheld camera presets that were made for the film by PremierePro.net creator Jarle Leirpoll. Faking handheld isn’t always the easiest so these can help.

If you’re wanting to learn more about Premiere Pro in general then pick up a copy of Jarle’s amazingly comprehensive 611 page book The Cool Stuff in Premiere Pro. This book assumes you have some PPro knowledge and builds upon that with tons of depth. It’s well worth the $45 or so.