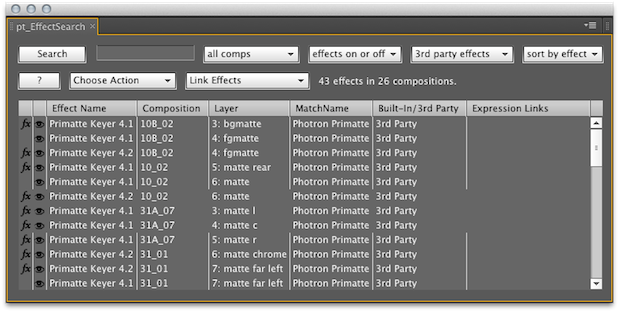 Note: this article is part of an ongoing series that features one After Effects script a week. For an overview on scripts, check out the debut post.

The problem: You are up against a deadline and working with a project from a freelancer. You open a project that was created on another system and boom! – too many third party plug-in effects are missing for After Effects even to tell you which ones, or where they are located. You face a long, tedious process of looking in every comp for every layer with applied effects, to attempt to locate the missing ones.

Or you can try pt EffectSearch. Not only can it return a list of all plug-ins of a certain type in your project – missing, third-party, built-in, on or off, within all comps, the open comp or a selection you make in the Project panel – it can take action on the result.

You can save a search report on disk, enable, disable, replace or even delete the selected effects. You can clean up a project by searching for all applied effects that are turned off, and deleting them.

There’s even a major added extra that users have requested in After Effects for years. You can link effects together, creating instances of a master Control Effect so that settings of all copies are linked to that one effect.

This script is thus another example of one that adds a feature set that most people don’t even know is missing from After Effects; in fact, it adds more than one of them. Global search and handling of effects replaces the tedium and user error of combing through a project layer-by-layer, comp-by-comp. Linking effects is a common way to work in many other animation packages, a feature that users commonly ask to have added to After Effects.

Look for the other two scripts in that bundle to be profiled in future editions of Script of the Week.