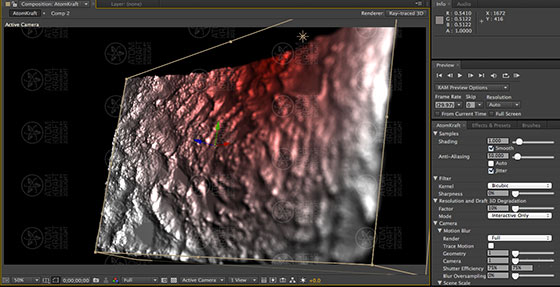 AtomKraft/Ae 1.0, a CPU-based interactive 3D toolkit, was released. AtomKraft/Ae works as a replacement for the built-in comp renderers (Ray-Trace 3D w/NVidia Optix aka “Picasso” and “Renoir”). It is designed to fully interpret AE’s 3D system and 2D layers, and adds these features to the AE toolset, many of which are not available in Element 3D:

Lester Banks has a slew of intro videos in First Look at AtomKraft 3D Environment for After Effects and David Stringham has several more on YouTube. Here’s Lester’s overview:

Adobe had a big presence at IBC 2012, which was detailed at its own website IBC Online (see more from Jonas Hummelstrand). IBC news might overshadowed a Premiere update for some; see Premiere Pro CS6 (6.0.2) update: HiDPI for Retina Display, bug fixes, and new supported GPUs by Todd Kopriva.

Among the big announcements at IBC was a new product, Adobe Anywhere. For now the first release date is TBD, but it will be intended for facilities with IT staff able to run a Windows server service separate from Creative Cloud. Still, it looks like something almost everyone will want at some point. The preview of Anywhere may have been best explained in New tech: Adobe Anywhere by John Montgomery.

For additional perspectives, see Adobe Anywhere – The Beginning of Offshoring Editing Jobs by Christopher Clark (on acquiring intangible skills that transcend technology) and The Terence and Philip Show Episode 40: Will we be outsourced or automated out of existence? Here’s the presentation of Anywhere from the Amsterdam Supermeet 2012 (at 15:45):

Andrew Kramer posted a free iPhone 5 3D model (in OBJ) and video tutorial in 134. Screen Animations on animating the screen and preparing the model for Element 3d. Not long ago, VinhSon Nguyen shared his method for Building An iPhone In After Effects, which evoked some good comments. He also posted Bonus Video: Building a 3D iPhone Completely in After Effects Part 2. And in Mocha AE: iPhone screen replace tutorial, Martin Brenand of Imagineer Systems shows how to track an iPhone and export tracking and mask XML data to Final Cut Pro to finish. Here’s Andrew:

At IBC, Jonas Hummelstrand noted new AE plug-ins from YUVSoft, “Automatic 3D depth generation from motion/DoF in 2D footage. Interesting plugin for Nuke and After Effects from YUVSoft. That is; if you believe 3D is here to stay…”

Andrew Kramer also posted 133. Depth Compositing, which show how to combine stock footage with 3D rendering and the use a Z-Depth pass. This method allows you to place 2D elements like stock footage into the depth of a 3D render. I also demonstrate how to export a Z-pass from 3D max, Cinema 4D and even use Element 3D to output a depth channel.” Here’s a sampler render from Andrew Kramer, and something from Jordan Shipman, Intro to z-depth compositing:

James Whiffin explains Getting An Edge On Understanding Premultiplication below. For more, see a little roundup, Alpha channels: premultiplied vs straight, which includes an explanation by Ben Rollason, also below.

Create and animate 3D cogs in After Effects by ChrisZwar is a 2-part video tutorial on how to create cogs inside of After Effects. Part 1 demonstrates the problems with trying to animate cogs, and how to solve them using standard 2D techniques. Part 2 shows how to build on this technique with the latest features of After Effects CS6 – producing extruded, ray-traced cogs and gears that animate together perfectly.

Joren Kandel at The Pixel Lab posted C4D and AE Quick Beginner Tut: Camera Animation Tip, which shows you a couple very quick tips for dealing with cameras. For more, see a collection of resources in Camera difficulties and rigs in After Effects and in AEP archives for “AE Camera.”

A Mercury Engine denoiser would be better, but it’s not a popular feature request, so here’s Cleaning Footage to the MAX – a practical guide for Denoising by Lucas Pfaff (he has notes on Vimeo). Noted earlier and also below is his [TUTORIAL] getting rid of Moire (After FX):

Eran Stern is offering discounts on his new AE training products. After Effects Artist in Action: Eran Stern’s Broadcast Design walks through how to “Create a High-Impact TV Promo” on Video2brain.

Broadcast Graphics Templates are 21 ready-to-use openers and interludes for television. This product is based on After Effects and Boris Continuum Complete plug-ins and includes 6 full tutorials with tips on how to get the most out of this package. Here are some samples from Eran: