Launched for Mac in 2014, Affinity Designer is now available as a public beta for Windows. It prepares the way for the next step from Serif: Affinity Photo for Windows. 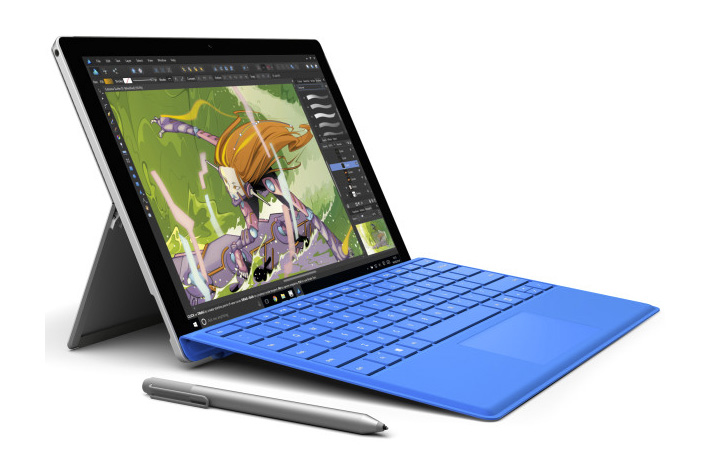 Why does graphic design software land on a website dedicated to video? Well, because many times artwork created in graphic software like Adobe Illustrator ends in video productions, so it makes sense to mention – and know about – a new program. A program that, according to some, does compete, in features and speed with Illustrator.

Affinity Designer is fast, meaning you can pan and zoom at 60fps and see all adjustments, effects, transformations and brushes in real time. It works in any colour space … RGB, CMYK, LAB, greyscale, and offers end-to-end CMYK workflow with ICC colour management and 16-bit per channel editing.

Serif say that “it’s incredibly accurate, allowing you to zoom to over 1 million per cent”. And Affinity Designer has the best PSD import engine available with full support for SVG, EPS, PDF, PDF/X and FH files, which means integrating it into a workflow is painless.

Constantly updated since it launched for Mac, the program has been well received by the market. It was selected as a runner-up in Apple’s “Best of 2014” list of Mac App Store and iTunes Store content in the OS X app category and has won the Apple Design Award 2015. 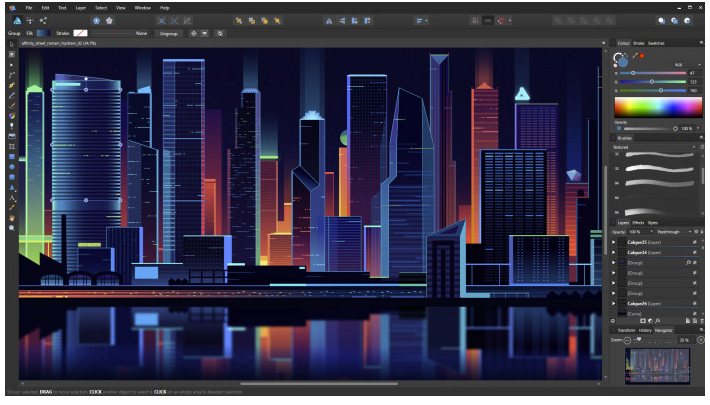 Initially presented as a Mac only application, it is also going to be available for Windows, as the other programs from the “suite”: Affinity Photo, expected for Windows by the end of 2016, and a much talked Affinity Publisher, which will launch in 2017 for Mac and Windows. Serif has been bombarded, since day one, with requests from customers wanting a Windows version.

Serif Managing Director Ashley Hewson says: “We know, because they tell us every day, that there’s a massive sense of excitement among Windows users who want the same professional design tools that our Mac apps deliver.

“The beta launch of Affinity Designer on Windows is a huge step towards that, although it’s important to remember that it’s not the finished product at this stage. Our beta phase for Mac was exceptionally valuable in helping us to refine the software and now we’re excited to work just as a closely with Windows users, to deliver a brilliant end product.”

The beta version of Affinity Designer for Windows has the number 1.5, what is somehow interesting, as it takes the same number as an update for the Mac version, announced recently, and that introduces a series of powerful new features. These new features are also present in the beta version of Windows.

Version 1.5 introduces the Constraints feature – the ability to control the position or size of an object relative to its container, making it possible to create reusable elements which perform in a pseudo-responsive fashion. Ashley Hewson says: “This is something we think is pretty unique to Affinity Designer. We’re super-excited to get it out to users.”

Meanwhile the Symbols feature will allow users to have multiple instances of the same object, where editing one object will edit them all simultaneously. Ashley Hewson adds: “These fast, powerful updates will be particularly useful for people working on user interface design and website mock-ups.”

Version 1.5 of Affinity Designer for Mac – winner of an Apple Design Award in 2015 – will be released in beta later this month, with the full version available for download through the App Store in August. There will be no charge for existing Affinity Designer owners.

If you want to try the beta version for Windows, go to Affinity’s website, register and you’ll get a download link. You’ll need to be running 64 bit Windows 7 and above to use the beta.

The first full version of Affinity Designer for Windows is likely to go on sale in around three months, for direct download from the Affinity website. Customers will pay only an initial price of $49.99 / £39.99 / €49.99 for the software and subsequent updates – there’s no ongoing subscription.