For anyone involved in creating and delivering content for film, broadcast television, or online channels, IBC 2015 is the place to be. Held annually in Amsterdam, the IBC conference and exhibition welcomes everyone from independent filmmakers to video professionals who manage multi-million dollar productions. Adobe is proud to participate in IBC and host a number of talented customers in its stand who will share their stories. Here, we share a bit about these amazing customers and how they’re following their passions with help from Adobe Creative Cloud.

For anyone involved in creating and delivering content for film, broadcast television, or online channels, IBC 2015 is the place to be. Held annually in Amsterdam, the IBC conference and exhibition welcomes everyone from independent filmmakers to video professionals who manage multi-million dollar productions. Adobe is proud to participate in IBC and host a number of talented customers in its stand who will share their stories. Here, we share a bit about these amazing customers and how they’re following their passions with help from Adobe Creative Cloud. 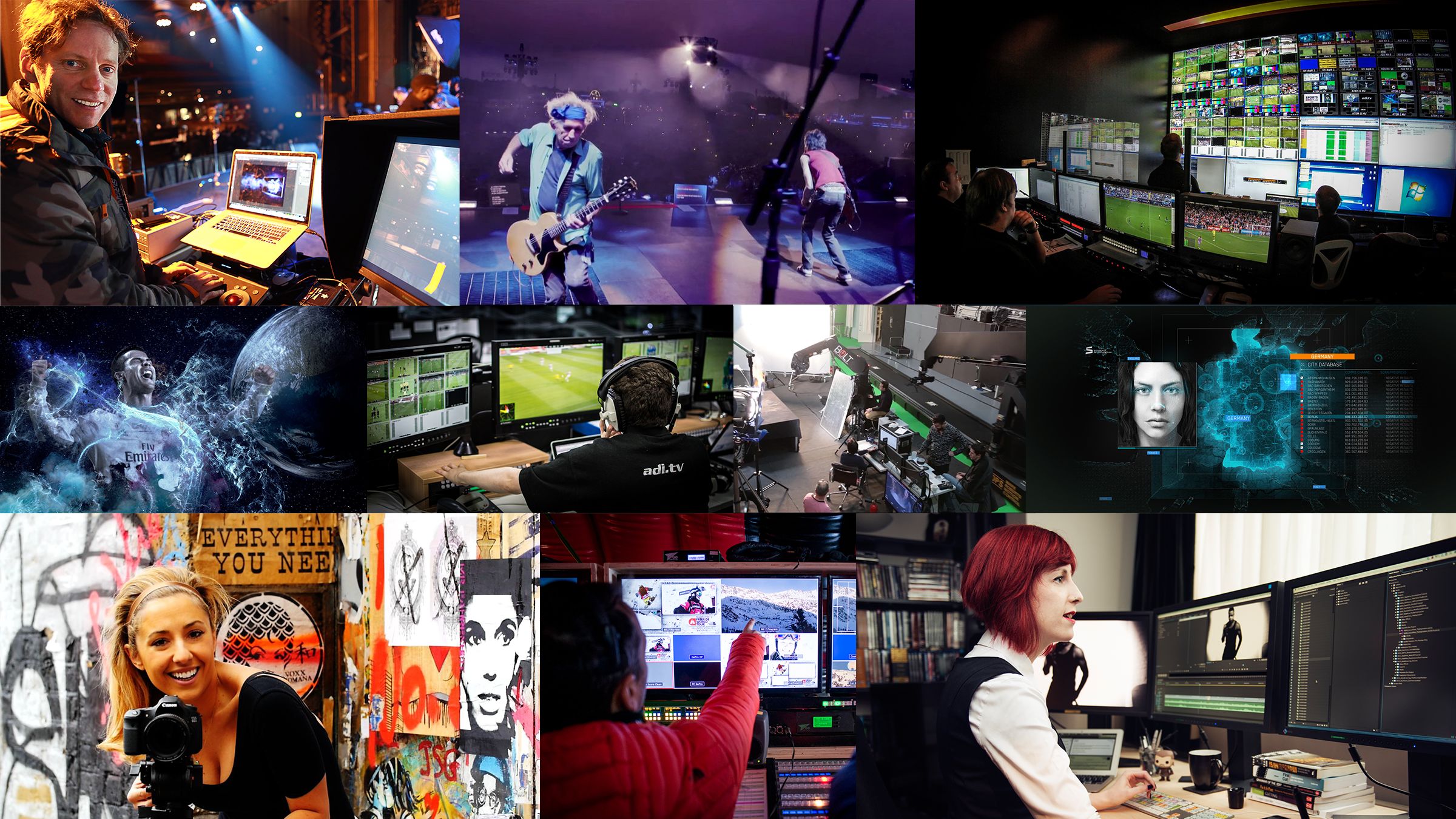 Liverpool Football Club scores with exclusive video
With 18 League Championships, eight League Cups, and five European Cups, Liverpool Football Club is one of the most celebrated teams in the English Premier League. Since 1892, “The Reds” have excited supporters across England and around the world. Today, LFCTV is broadcast to almost 120 million homes in 94 countries worldwide, and the club engages 40 million fans across all of its digital channels.

Dado Valentic blurs the lines between still and motion imagery
Dado Valentic worked as a producer and DJ before discovering the world of color grading 10 years ago. He learned his craft in Los Angeles before moving to London and opening his own company called Mytherapy. Today, he holds the status of master colorist and has worked on 60 feature films, hundreds of commercials, and actively engages with fashion industry clients to develop everything from online brand videos to billboards.

“SpeedGrade over the years has been our secret weapon and inspiration,” says Valentic. “We love the ability to create stylized color looks in SpeedGrade or Photoshop and bring them directly into the Premiere Pro timeline.”

Freeride World Tour takes extreme athletes to breathtaking heights
The Swatch Freeride World Tour (FWT) pits top freeskiers and snowboarders from around the world against some of the most beautiful, untouched peaks across Europe and North America. FWT produces up to 45 hours of raw footage for each stop in the tour, with deliverables ranging from short web clips to hour-long TV digests. For the 2015 world tour, FWT took its riders to a new, ideal venue for freeriding: the mountains near Haines, Alaska.

Working with Premiere Pro delivers measurable benefits in terms of time and cost. “Not having to transcode footage before editing in Adobe Premiere Pro CC means our team can start editing right away and we don’t have to purchase extra storage space,” says David Arnaud, Producer of Freeride World Tour. “While we can’t control the mountains, our workflow minimizes risk in the editing room to help us deliver video that captures the spirit of freeriding.”

ADI wows stadium fans with broadcast-quality sports video
Since Geraint Williams founded ADI nearly twenty five years ago, the company has grown to become a global pioneer in the creation, management, and distribution of video content and the technology that supports it. The company supports huge events and installations throughout retail and large sports venues, delivering both the infrastructure and the content to entertain and excite audiences.

“We’ve been working with Sky TV using Anywhere and Premiere Pro on a project for the English Football Leagues One and Two test that has just gone live for the new season,” says Williams. “The workflow sees Sky using Adobe Anywhere to clip up goals and key moments from matches across two leagues and to distribute these internally for use across multiple programmes and platforms.”

Territory Studios applies VFX expertise to Hitman: Agent 47
Territory Studio enjoys its reputation for being able to handle nearly any project that comes its way. With expertise in branding, motion, and digital, the studio works on a range of projects including feature films, brand work, and popular video games. After completing graphic and screen design for Marvel’s Guardians of the Galaxy and Avengers: Age of Ultron, Territory worked on Hitman: Agent 47, applying its design expertise across screen graphics and UI, VFX, logo, and titles.

“The tight integration between CINEMA 4D and After Effects lets our team experiment more, and with the perfectly exported cameras and lights we can do more without going back to the main 3D app,” says David Sheldon-Hicks, Creative Director and Co-Founder of Territory Studios.

If our setup works for you, there’s no way you’re going to do it more efficiently anywhere,” says Forsberg. “On feature films we’re saving 70% of manpower costs in post-production by having computerized system delivering everything as a pre-comp in the compositing software of choice, including After Effects and Premiere Pro.”

Kylie Flavell, intoxicated by possibility
Kylie Flavell has the tenacity and talent to make her dreams come true. When it comes to making her hot travel TV shows, including Hooked Up—which has 1.5 million YouTube viewers per episode—she does it all as host, producer, camera operator, editor, color grader, lighting engineer, sound engineer, post-production specialist, and distributor.

“I literally learned Premiere Pro in a day because it is so intuitive, and it integrates with Adobe Photoshop CC and After Effects CC so well,” says Kylie Flavell. “I shoot on a lot of cameras and work with different types of footage and frame rates. Premiere Pro can take on everything. If you’re using something for 16 hours straight, you have to love it. To me, Premiere Pro feels like a second skin.”

Siân Fever, short-form aficionado
Siân Fever knew that she wanted to work in video production when she was just a teenager. She watched loads of MTV and countless behind-the-scenes videos with famed music video director Joseph Kahn talking about his work. She knew her path would involve film school after hearing raves about it from a friend. Throughout her career, she has primarily focused on short-form content, and believes there is a lot to be gained by working in this genre.

“Short form’s credibility is largely overlooked but that’s where our viewing habits are headed. Most of us are gravitating toward two to ten minute videos,” says Siân Fever. “Now, I’m trying my hand at assistant editing for scripted and long-form and I’ve found that many of the skills I learned in short form are transferrable.”

Not going to IBC to hear Sian Fever’s presentation? Watch it online on September 15, 2015. Register now.

Simon Bryant, rocking concerts on screen
Simon Bryant’s love of music comes through loud and clear with his editing of concert and studio footage for films and DVDs. His work covers a range of genres and he’s been lucky to work with many well-known artists including The Rolling Stones, Ed Sheeran, Coldplay, and One Direction. Bryant is constantly examining what makes a project successful, both from an editing and a film point of view.

“As the project goes on and your understanding of the artist grows, you get more in tune with the performance,” says Bryant. “The first song always takes a lot longer to cut than the fourth song.”

MPC creates spectacular visions
MPC is one of the world’s leading visual effects and motion graphics studios, with more than 2,000 employees in eight global offices. The studio’s work includes blockbuster films such as Godzilla, the Harry Potter franchise, and Life of Pi, and advertising campaigns for global brands including Samsung, Ikea, and Visa. MPC works with agencies, production companies, directors, and does some direct-to-brand engagements as well.

“I’m in the motion design department, which is a team of about 25 to 40 people mainly working on commercial projects, promos, and branding,” says Will MacNeil, Senior Motion Designer with MPC. “We can take a project right from the brief, start designing, work up ideas, and see that project all the way through.”

Stefan Weiss, fearless editor, hands-on educator
When it comes to non-linear editing (NLE), Stefan Weiss is fearless. He’s worked in both film and broadcast television, and today enjoys editing documentaries on a variety of topics, from airplanes to reincarnation. Weiss balances his editing career with work as a trainer, focusing primarily on teaching others how to successfully switch from Avid Media Composer to Adobe Premiere Pro CC.

“My friend Michael Gamboeck, who is an Adobe employee and industry veteran, introduced me to Premiere Pro about three years ago,” says Weiss. “I was excited to experience something new with a different workflow, so I tried it, and really loved it.”