Bigger is not always better, but smaller isn’t quite ready for primetime… yet.

In 2011 I bought an iPad 2, and in 2012 I traded it up for an iPad 3. For 2013 I've opted to experiment with the first generation iPad Mini, and while this generation won't replace my iPad 3 I suspect–and hope–that the next one will. 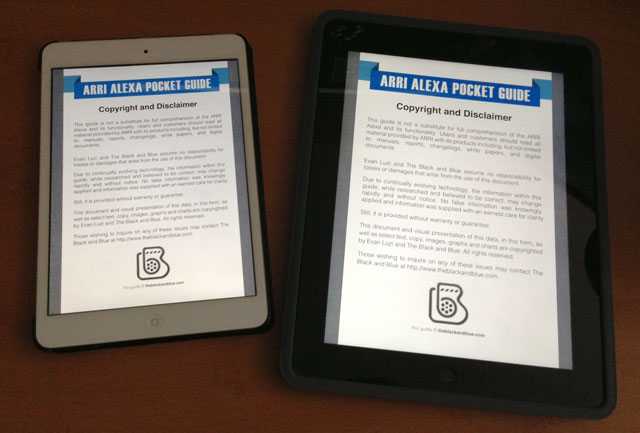 I love toys, and I love them more when they qualify as a business expense. I originally bought an iPad as a portfolio presentation device, and while it does a marvelous of that it has also become a repository for manuals and reference guides, a great way to take notes and pictures during location scouts, a Keynote presentation device and a brilliant way to do research on the web. As a media reader it has no equal. As a media generator, however… the size gets in the way.

The first generation of the iPad Mini is a little slower than the iPad 3 as it runs on an A5 chip instead of the iPad 3's A6, and the screen is higher resolution than the iPad 2 but is most definitely not a Retina display. The size, though, is what makes the Mini a winner for me: I still need a bag of some sort to carry the iPad 3 around easily, whereas I don't with the Mini. (The iPad 3 in its case is about the size of my 11″ MacBook Air.) The iPad Mini is small enough to fit into a pocket, and I can very easily hold it in both hands and type with my thumbs much the way I would on an iPhone–although with a much larger keyboard.

A year or two ago I shot a promotional piece for Research in Motion demoing their Blackberry Playbook and I was really impressed with the form factor. It was very easy to slip into a coat pocket and yet large enough to accomplish a lot of tasks that I perfom on a daily basis, like reading call sheets and scripts. The iPad Mini is a bit wider than the Playbook but it is still small enough to jam into a pocket for immediate access during a shoot.

I use my iPads as information storehouses. Not only do they contain all the videos that I currently show on my website but they contain a lot of other projects that I no longer show but that might be relevant during a job interview. Every time someone sends me information about a job I drop it into a folder in DropBox and then sync it with Goodreader on my iPad so I have every reference image, storyboard, script and call sheet available at a moment's notice. I use Evernote to take notes during meetings, phone calls and location scouts so I have all of a shoot's details near me at all times. I store camera manuals, camera cheat sheets, lens tables and copies of Film and Digital Times in Goodreader as well, while my Kindle app holds copies of books like Charles Poynton's Digital Video and HD and the VES Handbook of Visual Effects ready for quick reference.

In effect, my iPads are audio/visual reference libraries.

I'm one of those people who should never carry a bag. If it's not attached to my body I'm probably going to leave it somewhere. The iPad Mini is perfect for me for this reason. Also, it's just a nice and small device that isn't laptop-sized. It's big enough to read easily and small enough to type on. All the usual adapters that I need, such as iPad-to-HDMI, are available for the Mini. The only thing it's lacking is a Retina display, and the second Apple comes out with one my current iPads will be for sale on eBay.

Thus far I've bought WiFi-only iPad models, but I may invest in a cellular model when the Retina version comes out.

The iPad is a possibly the best media display device ever made, but the Mini is the size I've been waiting for. Having my reference library with me at all times is great, but I want it in my pocket instead of in a bag hanging off my shoulder. Hopefully, within the next year, we'll see an iPad Mini with a Retina display that will not only put my library in my pocket but make it enjoyable to read as well.