A rule can feel binding but can bring liberty when it has to do with composition. 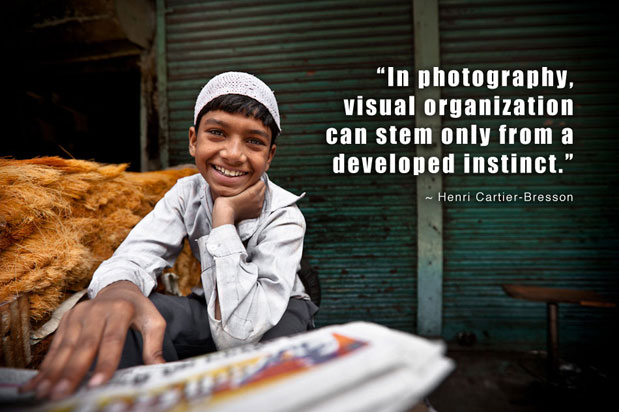 Henri Cartier-Bresson said “In photography, visual organization can stem only from a developed instinct.” I think what he meant here by visual organization is basic design principles and composition. These are things that can definitely be developed over time and yet he still uses that word “instinct”.

As much as we want to believe that compositional rules and principles of visual design can be taught, I think there still has to be a certain small seed of instinct or intuitive ability, if you will. So, the best of both worlds is a photographer who has what some people call “an eye” and a teachable spirit. Put these two things together and almost anything is possible.

But what happens to a person who may not have the “eye”? All is not lost. Even the worst photographer can get better if they are teachable. They may never become the best but they can become much better by following the simple rules of composition. Some people like to say, “Rules are made to be broken.” That’s fine for the intuitive artist. But for that person without the intuitive abilities having no real set of rules can be scary. Boundaries can be comforting. For these people maybe rules should be looked on as guidelines for their photography.

Let me try to put this in another way. In English, the word “rules” can be used in at least two different ways. It’s the same way we use the word “law” or “laws”. We have both the laws of nature and civil laws. You might say in a roundabout way civil laws are based on the knowledge of the laws of nature. We put up stop signs at intersections and make it a law that a driver has to stop. Why? Because the law of nature states if someone enters the intersection at the same time that I do, one of us is going to get injured and possibly die. So in some ways the laws of nature dictate or govern the laws of man.

When we talk about compositional rules–or “laws”–what we are really saying is that there are principles that go beyond us that are just a natural way in which people view images. These laws or rules in composition influence the way we produce our photographs. I’d like to suggest that people, who are not intuitive when it comes to visual design, will lean strongly on compositional rules and laws and they will actually use them as their own personal laws or guidelines when producing visually arresting images.

For some of us-including myself-this would be very stifling and in fact, rather suffocating. David duChemin likes to refer to “the Geek and the Artist”. It is the geek who uses these laws to their advantage and it is the artist who has the liberty to break them to their advantage. I think for a novice photographer it is better to have someone criticize your work by saying you seem bound by the rules of composition than to have someone say you have no concept of composition or design.

Almost everyone can learn what shutter speeds do to an image, what an aperture does to the depth of field and to a photograph. Someone can be taught how to pan a photo or how to read a histogram. But it’s much harder to teach someone why to use a 16mm lens versus 200 mm lens. In fact in my years of teaching, this type of a concept is more difficult to teach than straight compositional principles. What I have found is that even the most ardent geek can feel like an artist when they put themselves under the rules of composition.

In closing, let me say there are no photo police. There are a lot photographers with inflated egos that will tell you that you should never submit yourself to a set of rules or boundaries. If you err on the geek side of photography and find your images lacking strong compositional elements, then I urge you to put yourself under the discipline of compositional rules. At first it might feel remedial and feel as if you’re bound by these rules. In fact, you are, but it’s a voluntary servitude as you work on training your eye and your mind. It’s discipline and it is only for a season. If it helps, think of it as tying up the geek and releasing the artist.