Creating 3D text in After Effects has long been a cottage industry, generating many workarounds, pseudo 3D methods, scripts, new technology, licensing deals, and 3rd-party plug-ins. Adding to the parade is one of the big new features in After Effects CS6, the extrusion and material options in the Ray-tracing 3D renderer. After Effects CC added another wrinkle, another workaround with Cinema 4D Lite. Some will benefit from beautiful renders by new features, though some will get bogged down by requirements, render times, or inadequate or involved features, and turn to  also surveyed here. 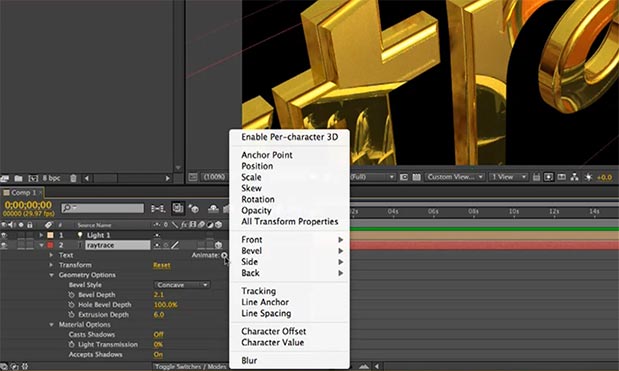 Creating 3D text in After Effects has long been a cottage industry, generating many workarounds, pseudo 3D methods, scripts, new technology, licensing deals, and 3rd-party plug-ins. Adding to the parade is one of the big new features in After Effects CS6, the extrusion and material options in the Ray-tracing 3D renderer. After Effects CC added another wrinkle, another workaround with Cinema 4D Lite. Some will benefit from beautiful renders by new features, though some will get bogged down by requirements, render times, or inadequate or involved features, and turn to pseudo 3D methods also surveyed here.

For the Ray-traced 3D option, which renders instantly with an approved Nvidia CUDA card, Todd Kopriva collected free 3D material options project and tutorials for After Effects CS6, including the presets and tutorials from Motionworks. You may also want to read over the intro to CS6 by Chris and Trish Meyer, and their video on Targeting Properties in the new Ray-Traced 3D Engine (pictured above; more in AE Help). Here’s Todd’s own introduction, Extruding 3D Text and Shapes and Modifying Geometry Options, from the free After Effects CS6 New Features Workshop from Video2brain:

Render times for ray-tracing might be painful without serious GPU power, which could change if, after snagging the low-hanging fruit, there’s longer-term behind-the-scenes development similar to what’s begun in Photoshop CS6. The issue of hardware requirements and speed was discussed adeptly by Stu Maschwitz in Ray Tracing in After Effects CS6, who “ordered out” some nice renders (embedded below). Stu also discussed missed opportunities for other options in Fast Ray Tracers.

Unfortunately, by 2014 the Ray-tracing 3D renderer appeared to be reaching the end-of-life stage (unoffically dead). Apparently Adobe won’t remove the Ray-tracing 3D renderer until they’ve “replaced it with something better. And we’re working on that something better now.” Adobe now works closely with Maxon, but has made the same Cineware-enabling API available to all 3D apps, though still leaving older efforts out in the cold (the 3D Artisan API used Atomkraft was deprecated earlier).

Another fast-rendering option for 3D text is Video Copilot Element 3D, a newer After Effects plug-in that produces excellent results. It’s even faster using the setups of MovieType For Element 3D. Here’s just one tutorial from Andrew Kramer, on text and shape extrusion:

There are a number of other approaches for creating 3D and faux 3D text (and shapes) in After Effects with native and 3rd party tools. It’s rather easier to list them than to demonstrate them, especially since there are a number insightful options for solving deficiencies in the popular, inexpensive approaches (duplicate layers and the Shatter effect). For example, without ray-tracing things like reflections (resources) need to be done by hand or with filter assistance, as discussed in the Motionworks’ interview with Zax Dow of Zaxwerks.

A summary of the main older methods can be found in the 3-part tutorial for Extruding 3D Text & Shapes in After Effects by Andrew Devis (who also had an intro series on 3D in AE). Devis’ summary covered layer duplication, Shatter, and Zaxwerks & 3D applications and Repousse from Photoshop (Repoussee is no longer available). As usual, Devis has surveyed some tutorials and saves you time by offering a best practice.

So, here’s a nearly complete list of all of the approaches available (are there more?), along with example tutorial links:

◊ In July 2014, Eran Stern covered the topic, looking at major solutions in depth in a 5-hour course at Lynda.com, 3D Typography in After Effects. Eran compares details like rendering speed too – even picking his favorite (considering only basic features) from the Ray-traced 3D renderer, Cinema 4D Lite, Element 3D, Invigorator, Shape shifter, BCC 3D objects, plus 3D-import plug-ins. Later, Toolfarm tried to get in on the action with 6 Ways to Make Extruded 3D Text in After Effects.

As a final example, here’s one of the more entertaining efforts from recent years, How to make 3D Text and use 3D Stroke in After Effects – Live Tutorial from Greyscale Gorilla (based on the Graymachine 3D preset to create 3D extruded text with layer stacks). Ohh, and why not some of Adobe’s intended, Cinema 4D for AE, also from the Gorilla.