Portions of the Scientific and Technical Awards Presentation will be included in the Oscar ceremony.

The following Academy Awards for scientific and technical achievements were presented on Saturday, February 11, at the Beverly Wilshire hotel in Beverly Hills, CA: 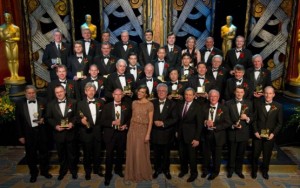 The Board of Governors of the Academy has voted the Gordon E. Sawyer Award to Douglas Trumbull, a visionary filmmaker who has worked as a designer, director, inventor and entrepreneur, for his lifetime of technical contributions and leadership in the motion picture industry.

Trumbull has distinguished himself as a visual effects pioneer with major contributions to such films as “2001: A Space Odyssey,” “The Andromeda Strain,” “Silent Running,” “Close Encounters of the Third Kind,” “Star Trek – The Motion Picture,” “Blade Runner” and “Tree of Life.”

John A. Bonner Medal of Commendation

Visual effects technologist Jonathan Erland has been voted the John A. Bonner Medal of Commendation by the Board of Governors of the Academy.

Erland joined the newly created Industrial Light & Magic to work on the visual effects for the 1977 film “Star Wars.” He continued in the burgeoning visual effects field as director of research and development for Apogee Productions, where he received patents for a reverse bluescreen traveling matte process, the Blue-Max flux projector and a method for making front projection screens. The innovations, along with the development of a digital traveling matte system, also earned Academy Scientific and Technical Awards.

To Andrew Clinton and Mark Elendt for the invention and integration of micro-voxels in the Mantra software.

This work allowed, for the first time, unified and efficient rendering of volumetric effects such as smoke and clouds, together with other computer graphics objects, in a micro-polygon imaging pipeline.

To Radu Corlan, Andy Jantzen, Petru Pop and Richard Toftness for the design and engineering of the Phantom family of high-speed cameras for motion picture production.

The Phantom family of high-speed digital cameras, including the Phantom Flex and HD Gold, provide imagery at speeds and efficacy surpassing photochemical technology, while seamlessly intercutting with conventional film production.

To Dr. Jürgen Noffke for the optical design and Uwe Weber for the mechanical design of the ARRI Zeiss Master Prime Lenses for motion picture photography. In a moving moment, the award was accepted by Weber and colleague Christian Bannert, with host Milla Jovovich asking the audience for a moment of silence afterwards in the memory of the late Dr. Noffke.

The Master Primes have achieved a full stop advance in speed over existing lenses, while maintaining state-of-the-art optical quality. This lens family was also the first to eliminate the magnification change that accompanied extreme focus shifts.

To Michael Lewis, Greg Marsden, Raigo Alas and Michael Vellekoop for the concept, design and implementation of the Pictorvision Eclipse, an electronically stabilized aerial camera platform.

This versatile family of 5-axis camera and lens stabilizers allows any standard motion picture camera to be fitted into the open architecture of the structure. The system can be quickly balanced and made ready for shooting platforms such as helicopters, boats, camera cars or cranes.

To John D. Lowry, Ian Cav©n, Ian Godin, Kimball Thurston and Tim Connolly for the development of a unique and efficient system for the reduction of noise and other artifacts, thereby providing high-quality images required by the filmmaking process. An esteemed name in film transfer and restoration, John Lowry passed away three weeks before the ceremony. His wife and colleagues paid tribute to him on the stage, with other recipients throughout the evening also saluting the loss of an industry pioneer.

To FUJIFILM Corporation, Hideyuki Shirai, Dr. Katsuhisa Oozeki and Hiroshi Hirano for the design and development of the FUJIFILM black and white recording film ETERNA-RDS 4791 for use in the archival preservation of film and digital images.

Specifically designed for laser film recording and widely used in the industry today, the high-resolution FUJIFILM ETERNA-RDS 4791 film stock is an important step in protecting the heritage of the motion picture industry.

To Franz Kraus, Johannes Steurer and Wolfgang Riedel for the design and development of the ARRILASER Film Recorder.

The ARRILASER film recorder demonstrates a high level of engineering resulting in a compact, user-friendly, low-maintenance device, while at the same time maintaining outstanding speed, exposure ratings and image quality.

Portions of the Scientific and Technical Awards Presentation will be included in the Oscar ceremony.