This review is about the 2 quite different Chromebooks I recently used to write, produce and publish 2 more books. I wanted to prove that books could me produced entirely with a Chromebook, and it worked. 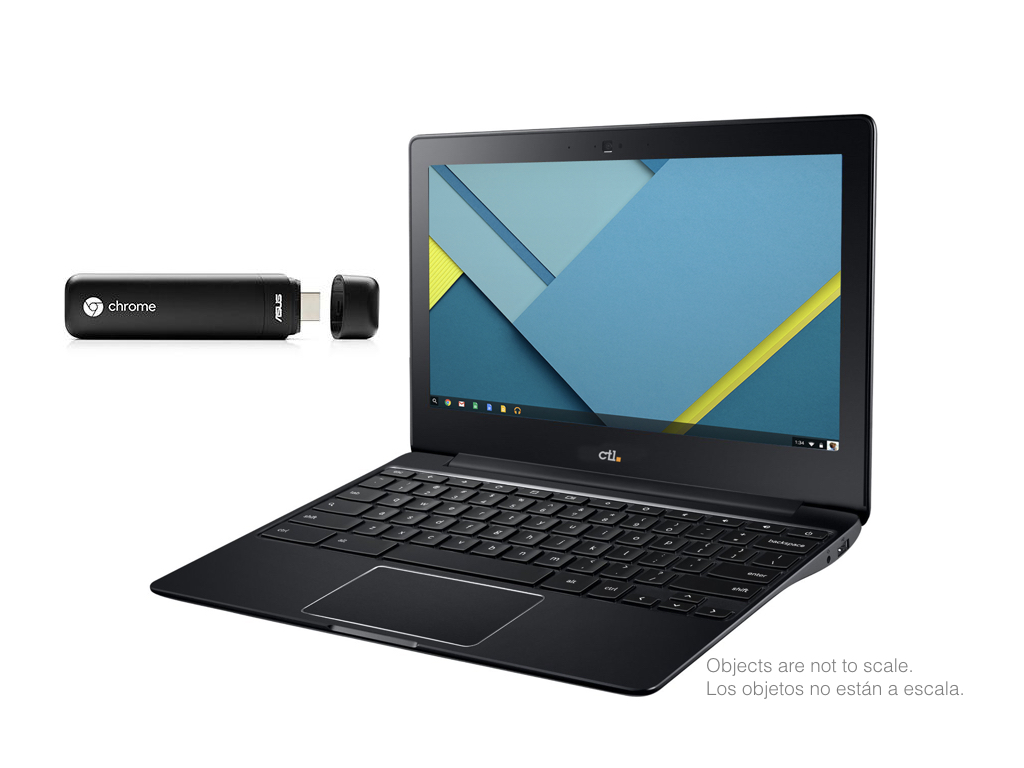 In the past few months, I have purchased two quite different Chromebook models, and used them to write, produce and publish two more books. The first is a CTL J4 Plus Chromebook laptop with 11.6” IPS matte screen, 801.11ac dual-band WiFi, HDMI up to 4K UHD and a physical inboard Spanish keyboard, and costs around US$200. The second is a Chromebit stick from Asus, which looks like an elongated USB memory stick, but is really a complete computer that costs well under US$85. You plug the Chromebit into any HDMI monitor, and add your own keyboard and pointer device. Both Chromebooks were more than capable of producing and publishing the two books: Chromebooks for bilingual writers —which is an English adaptation of the original Chromebooks para escritores bilingües which I wrote first. Even though both Chromebooks were quite capable, one is noticeably faster than the other. Ahead I’ll tell you all about my findings about each Chromebook I used, as well as the solar wireless keyboard I used with the Chromebit, and the wireless trackpad. 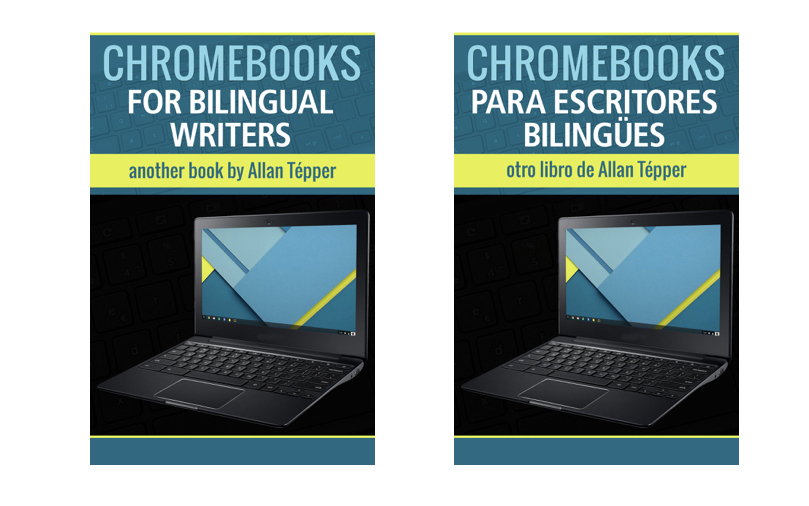 I produced all of my prior books with my MacBook Air. There are the two links to the new books I created completely with Chromebooks are Chromebooks for bilingual writers (in English) and the original version, Chromebooks para escritores bilingües (in Castilian, the most widely used Spanish language). I did about 95% of the writing and production with the CTL J4 Plus, and the other 5% with the Chromebit. However, I have had plenty of use with the Chromebit after finishing the two books. In fact, I wrote this entire article review 100% with the Chromebit.

Myths and realities about Chromebooks

There are many naysayers who incorrectly state that a Chromebook is useless without an Internet connection. In reality, there are many Chrome apps that can work offline, without any continuous Internet connection. A few examples include Google Docs, Stackedit (which I used to write this review article on a Chromebook), a dictionary, the free Kindle Cloud Reader from Amazon, which allows you to read traditional Kindle books on your Chromebook without need of any Internet connection after downloading the books. Of course, you can also read Kindle books without any Internet connection after downloading them to your mobile phone, be it Android, Blackberry, iPhone, Windows… or your Android, iOS (iPad or iPod Touch) or Kindle e-ink or Kindle Fire tablet. Chromebooks have a built-in multimedia player, a photo editor and readers for PDF and Microsoft Office documents that also work offline. What else can you do with a Chromebook besides writing, producing and publishing books? You can:

How I discovered CTL, and why I bought my Chromebook laptop from them

CTL is a wonderful US company from Oregon that I didn’t know existed until recently. I discovered CTL on Amazon.es, Amazon’s website for Spain. Even though I am from and live in the United States, I was picking out a Chromebook there because most Chromebook manufacturers refuse to sell their products with a Spanish keyboard in the US, even though Castilian is the second language in this country, and there are more Castilian-speakers in the United States than in Spain. Most of the popular brand names I found at Amazon.es with a Spanish keyboard were older ones that don’t appear on the official list of new Chromebooks that either have the capability of running Android apps, or are about to get that via a free download. CTL was different, since their models were current, and further research helped me determine that company is based in Oregon, and does its manufacturing there. I wrote to CTL’s US sales department to ask whether they would be willing to sell the version of the model CTL J4 Plus with a Spanish keyboard here in the United States, so I wouldn’t have to import it from Spain. The quick and friendly response: “Sure, how many do you want?” was a delight to hear after dealing with so many other computer manufacturers (with the notable exception of Apple) that refuse to sell laptops in the US with a Spanish keyboard. And unlike Apple, CTL fortunately still offers laptops with a matte screen, which is a must if you want to use a laptop outdoors in the daytime. I even prefer a matte screen indoors.

The inboard Spanish keyboard in the CTL J4 Plus Chromebook

What these two Chromebooks have in common

Where these two Chromebooks differ

The solar wireless keyboard I used with the Chromebit 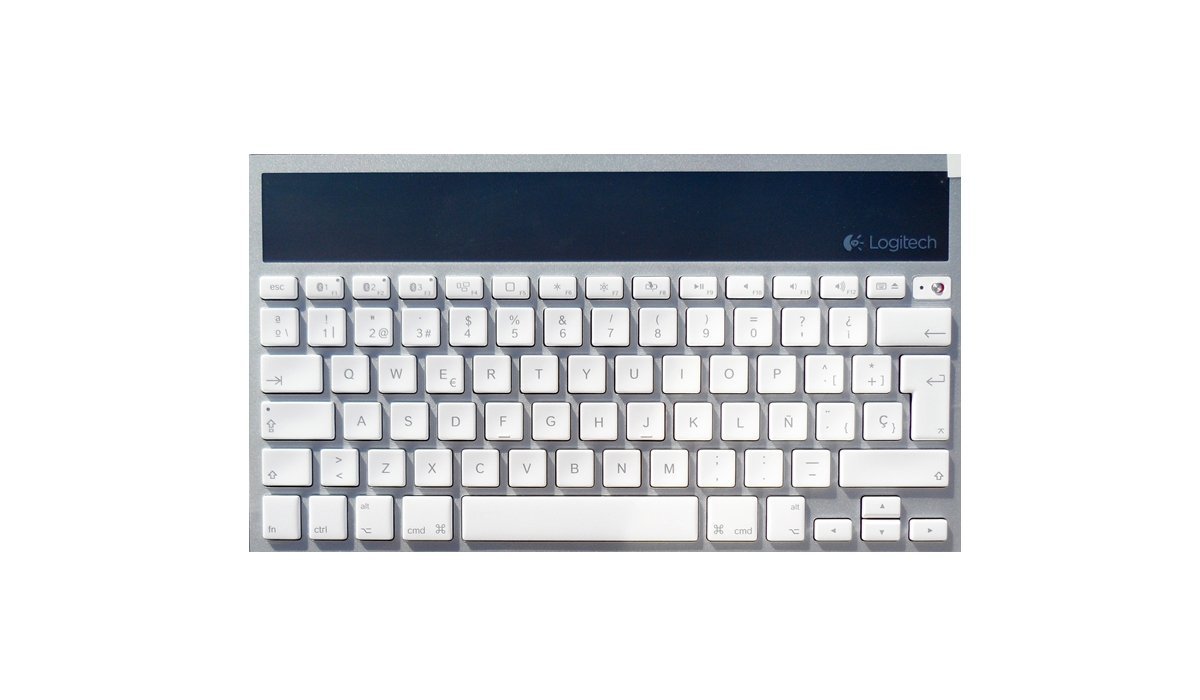 As you’ll see here, my current favorite wireless keyboard is the Logitech model K760. It’s solar and is continually charged by artificial or natural light. After almost a year, I have never had to change the batteries, and in fact, I don’t know whether it’s even possible. Fortunately, it’s available via Amazon (United States) with the Spanish layout you’ll see above. As I have covered in prior articles, are many advantages to the Spanish keyboard even if you type in English. It currently costs under US$20 and is without a doubt the best external keyboard I have ever used to date.

The wireless trackpad I used with the the Chromebit

My current favorite external trackpad is the original Apple Magic Trackpad. It’s quite costly, but I got it as a gift from my brother, who received it with his iMac… and he prefers using a mouse. In fact, now the original Magic Trackpad is more expensive than the Magic TrackPad 2 from Apple. They no longer make the original, although sometimes it’s available as refurbished. If I had to buy another trackpad, I would probably try the wireless one from Logitech because it costs so much less, and I have always liked pointing devices from that company. Before using the original Magic Trackpad, I used the Logitech trackball. The reason I migrated from trackball to trackpad is because of the gestures, which saves me time when writing or editing audio or video.

Nit picking on the Chromebit stick

As I write this, the firmware/software on the Chromebit is up to date to versión 55.0.2883.87
plataform 8872.70.0 (Official Build) stable-channel veyron_mickey frmware Google_Veyron_Mickey 6588.197.0. Each time the keyboard reconnects via Bluetooth after the Chromebook waking up from sleep, it takes around 30 seconds before it is usable to type, even though the same keyboard awoke the Chromebit instantly. I blame the Chromebit (not the keyboard) because the same keyboard is available in a fraction of the time when used with my MacBook Air. On the other hand, the Chromebit reconnects almost instantly to the Magic Trackpad. I did not try to connect these wireless devices to the CTL J4 Plus while I had it.

Considering I published those two books and this review, it should be quite obvious that I am very into Chromebooks for the majority of tasks where they work astoundingly well, although I am the first to admit that there are still tasks where a Chromebook doesn’t work yet.

It is astonishing to see that the Chromebook platform is so powerful, even soon for an application like Photoshop. Adobe has already shown and is about to release an authentic Photoshop service for Chromebooks, where Adobe’s service does the heavy lifting, and your Chromebook acts as a remote control and portal to see the result streamed to you in real time. Something similar is already possible with YouTube online video editing, but I know exactly where the limitations lie. I know that online video editing with YouTube doesn’t come close to what is possible with professional tools like Blackmagic’s DaVinci Resolve, Apple’s Final Cut Pro X, Avid’s Media Composer or Adobe’s Premiere Pro CC. I recognize that those services may be sufficient for ENG (Electronic News Gathering), where compressed assets are uploaded and there are few sophisticated transitions or special effects. That’s not the case for commercial TV spots where uncompressed or barely compressed formats like Apple’s ProRes or Avid’s DNxHD. I also know that a Chromebook cannot do the final steps of a multimedia book, as I did with The Royal Spanish Coverup and El encubrimiento de la Real Academia. For the final phase for Kindle multimedia books, you need to use the free Kindle Textbook Creator app from Amazon in a Mac or Windows computer. To do the final steps with Apple’s iBooks platform, you need to use the free iBooks Author app in a Mac. But at least you can write all of the text for those multimedia books on a Chromebook and later perform (or subcontract) that final steps.

There are probably other demanding applications in other fields where a Chromebook won’t be the ideal tool either, but for many people who don’t do such specialized tasks, nowadays Chromebook is an excellent solution. And for those who already have a sophisticated computer at home or at the office for more advanced tasks, perhaps they want a lighter computer with a matte screen to write and do business work outdoors, with daylight.

I wish the Chromebit could be expandable to 4GB, but I am extremely happy with what it does for about US$85. I love the CTL J4 Plus, but wish it had better internal speakers. I hope to review other CTL models in the future, especially one of the ones that promise what has been previously unattainable: the combination of a screen that is matte, touch and color. If you want the CTL J4 with a US keyboard, you can find it on Amazon (US) here. If you want it with Spanish keyboard in the US, you can find it here, directly from their US website. Just be sure to check the option at the bottom of the screen. (You can combine the Spanish keyboard with English-language
menus if preferred.) If you’re in Spain, you can find it here. 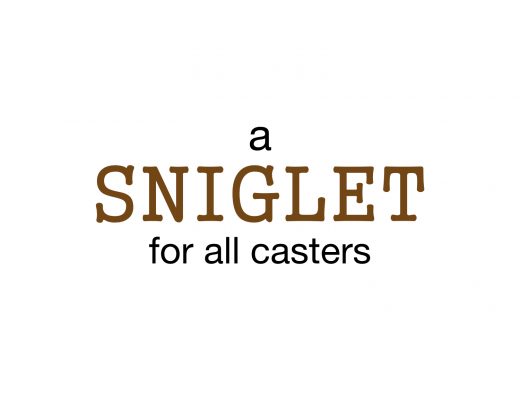 In BeyondPodcasting episode 15, Chris Curran of Podcast Engineering School and I introduce a new sniglet for all casters... 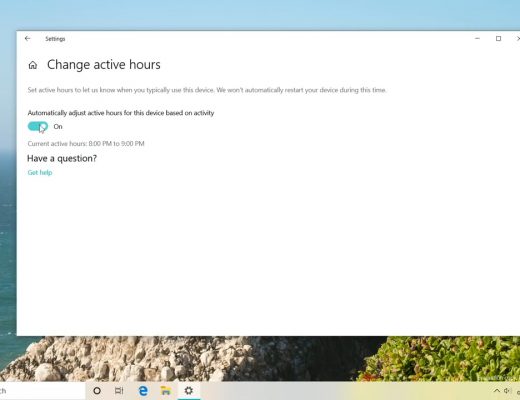 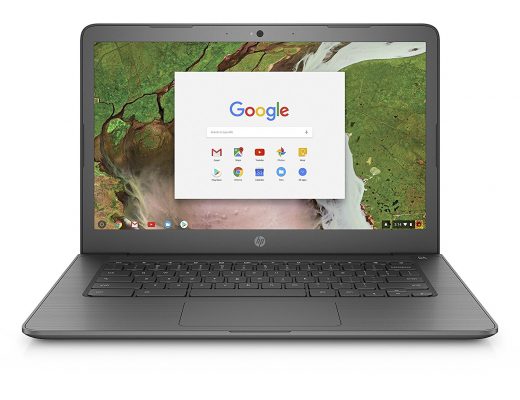 Chromebooks have come a long way, since I first reviewed a CTL J4 Plus and a Chromebit stick back...