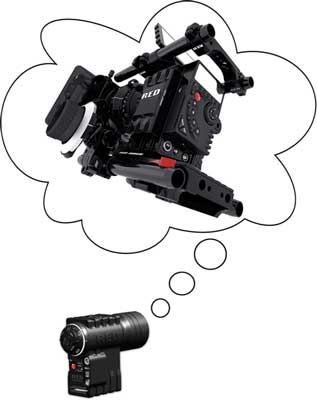 Six months ago I posted an article here with 10 reasons (and a bonus speculation, which now seems way off) why Scarlet would “change the game in 2009.” At that time, Scarlet was RED’s “entry level” camera, explicitly designed to capture indy filmmakers and “soccer moms” alike. When I posted the article, Scarlet had received far less press than the “bigger is better” Epic announcement; RED was announcing one camera that would eclipse the RED One, another which would significantly underprice all but the lowest end of the fixed-lens video camera market.

The game has indeed been changed – by RED themselves, and only halfway to the finish line. The media seems to have a fondness recently for the phrase “we were all wrong” given world events of late, and now that the middle of the Scarlet line is now powerful enough to obsolete the RED One, it’s worth looking at whether there’s anything to get excited about at the prosumer end of the spectrum.

Let’s take a quick look at my top ten from back then:

1) Sensor size – clearly this will be the salient characteristic of the initial RED line forevermore; with its latest announcement RED makes it clear that the Mysterium chip can scale to previously unheard of resolutions, and Jim Jannard has offered insight that resolution-wise, RED uses rules none of us was even considering.

2) Price – the phrase 3K for $3K may not be gone but it is certainly forgotten. $3K now buys you a “brain” – no viewfinder, no grip, no recording device – in short all of the “sold separately” limitations Mike Curtis pointed out apply equally well to this humblest entry as they do to the truly configurable REDs.

4) Redcode which also delivers what looks to be vastly improved dynamic range. This is the part of the announcement that took me the longest to notice: 13 stops, which may mean you can shoot without clipping even on a bright contrasty location and retain color in the low midrange.

An aside before I move on – in the previous article, I mentioned Redcode RAW and soccer mom in the same point. There you have the use that has been abandoned; instead of giving the DSLR-like option of shooting low-end compressed for users who don’t need RAW all the time, RED remains firmly The Post-Production Camera – NOT for use by the novice until a drastic revamp of the pipeline occurs.

5) RGB via HDMI – It’s hard to believe I considered this worthy of the top ten, but at that time it did seem notable that RED would provide an easy way to pipe video straight out of the camera. Again, I no longer see this as a priority – until it is.

6) Plug and play – yeah, well, no. This is tbe big downer to the crowd who was hoping for the $3K camera that would actually eclipse everything else at that price; the price has effectively gone way up, because while $3K may still end up buying you 3K, you won’t have the viewfinder to see it, the device to record or transfer it, or even the grip to hold it without adding extra dough. Or so it seems.

7) Fixed lens – what was an acceptable and even enticing trade-off – a fixed lens with optics that Jim Jannard would accept – now just looks like you’re a chump if you end up with the one and only RED that doesn’t have the ability to mount just about any lens you would ever want, leaving you to fumble with your Brevis or Letus for customization. Likewise, the 2/3 sensor to match this lens now sounds like it will cause you to miss the proverbial boat, not of image fidelity but of cinematic quality, especially compared with the almost-good-enough DSLR’s now learning to do this stuff.

8) Customization – good lord, this one now belongs at number one with a bullet.

9) Controls. Who can say? The controls for the previous camera certainly looked enticingly ground-breaking, and Jim has not lost his affinity for posting enticing renderings of physical interfaces. Just because all we get to see right now is a brain in a box and some lovely renderings (see above) doesn’t mean that Scarlet won’t innovate this area significantly, especially when you think of actually shooting a movie with a DSLR.

10) Fearless market position. Well, yes. Some things never change because they are fundamental. It’s notable that RED is willing to roll out these sweeping changes months ahead of even the earliest arrivals. It’s almost as if Jim Jannard, who clearly isn’t in this just to make a buck, is challenging the Japanese camera manufacturers to come up with viable competition – and thereby compete with their own obsolete product lines as well.

Still, lovers of cameras like the Sony EX-1 have lost a dream with this announcement – the dream of heading down to the Apple store (my now ludicrous sounding +1 point) and for less than ten grand, picking up the entry-level post-production camera and a system built to finish film-quality images.

So the RED is dead to consumers. Long live the RED! I for one welcome our Mysterium overlords; they have given ample room to the Sonys, Canons and even Nikons of the world to answer the challenge for the prosumer while remaining well in reach as an easily rentable, astounding, game-changing imaging device. My +1 guess that RED would need the Apple Store to distribute it is no longer viable; RED no longer has to solve this problem, because for the time being it is no longer most interested in getting tens of thousands of cameras into the hands of non-professionals, a game to the bottom of which these other companies race one another. RED appears smarter than that.