It’s another first for Sony: the ZV-E10 is the first Alpha series interchangeable lens vlog camera, and it includes advanced video features such as 4K video shooting and Slow Motion high picture quality. 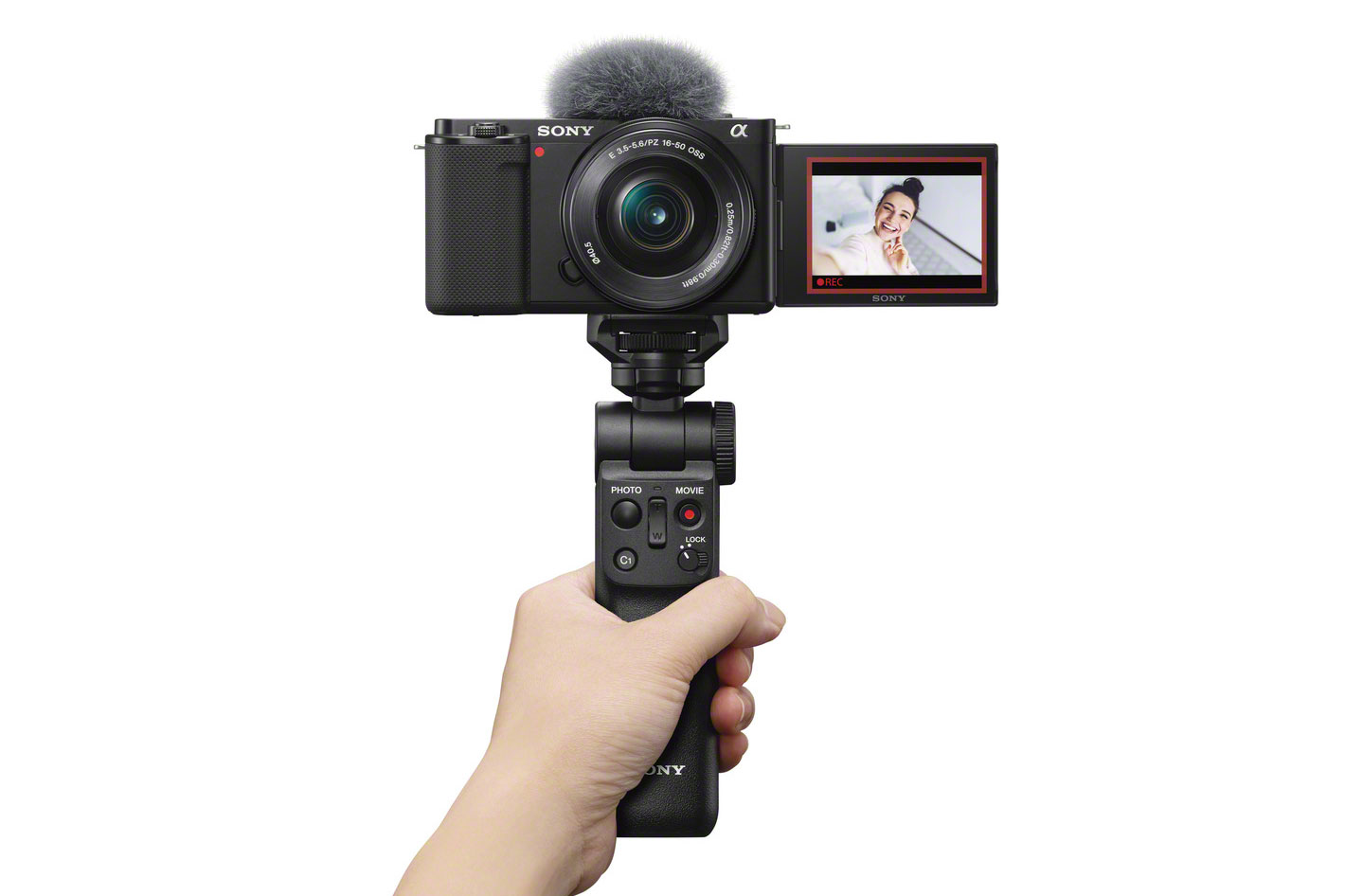 Vloggers have another camera to choose from: the Sony ZV-E10, which the company introduces as a camera with a custom-built feature set that is optimized for video creators.

Designed from the ground up for vlogging and vloggers, the new camera combines Sony’s advanced imaging technology with extensive usability and a custom-built feature set that is optimized for video creators. At its core, the ZV-E10 features a 24.2-megapixel (approx. effective) APS-C Exmor CMOS sensor and BIONZ X image processing engine to produce high-quality imagery with high-sensitivity, detailed texture depiction and beautiful natural bokeh. 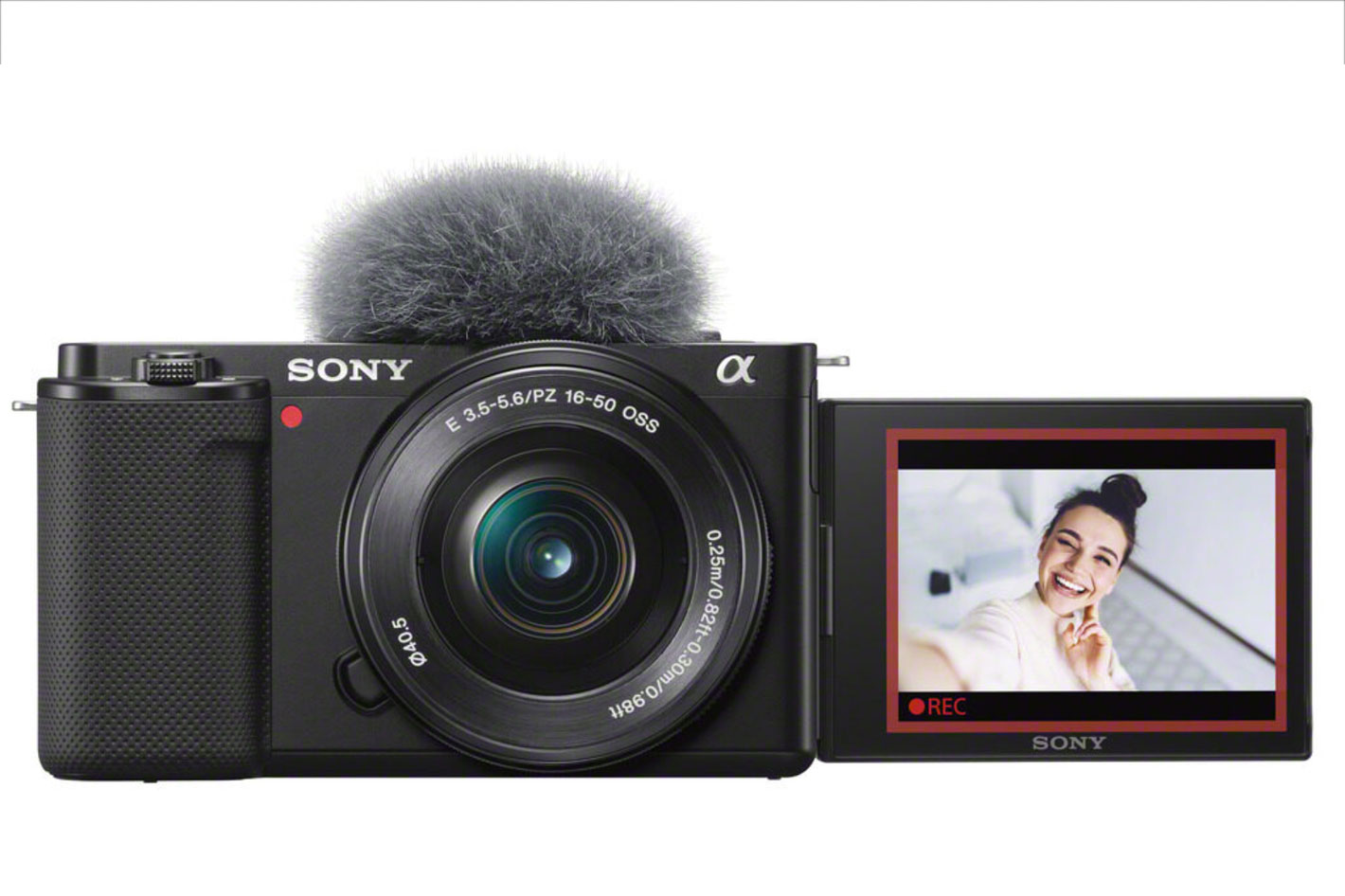 Sony claims that what makes the new camera different is that “the ZV-E10 includes the acclaimed vlogging-specific features favored in the popular ZV-1 digital camera including “Background Defocus” that can smoothly switch between a blurred (bokeh) and sharp background, as well as the “Product Showcase Setting” mode that allows the camera to automatically shift focus from the subject’s face to an object being highlighted.”

“With the introduction of Sony’s first interchangeable lens vlog camera, the ZV-E10, we are excited to meet the growing needs of today’s creators,” said Yang Cheng, Vice President, Imaging Solutions, Sony Electronics Inc. “The new ZV-E10 pairs the versatility and excellent image quality of a large-sensor interchangeable lens camera with user-friendly features that are specifically designed for vlogging, making it an ideal tool for video creators looking to transition to a more advanced set up.” 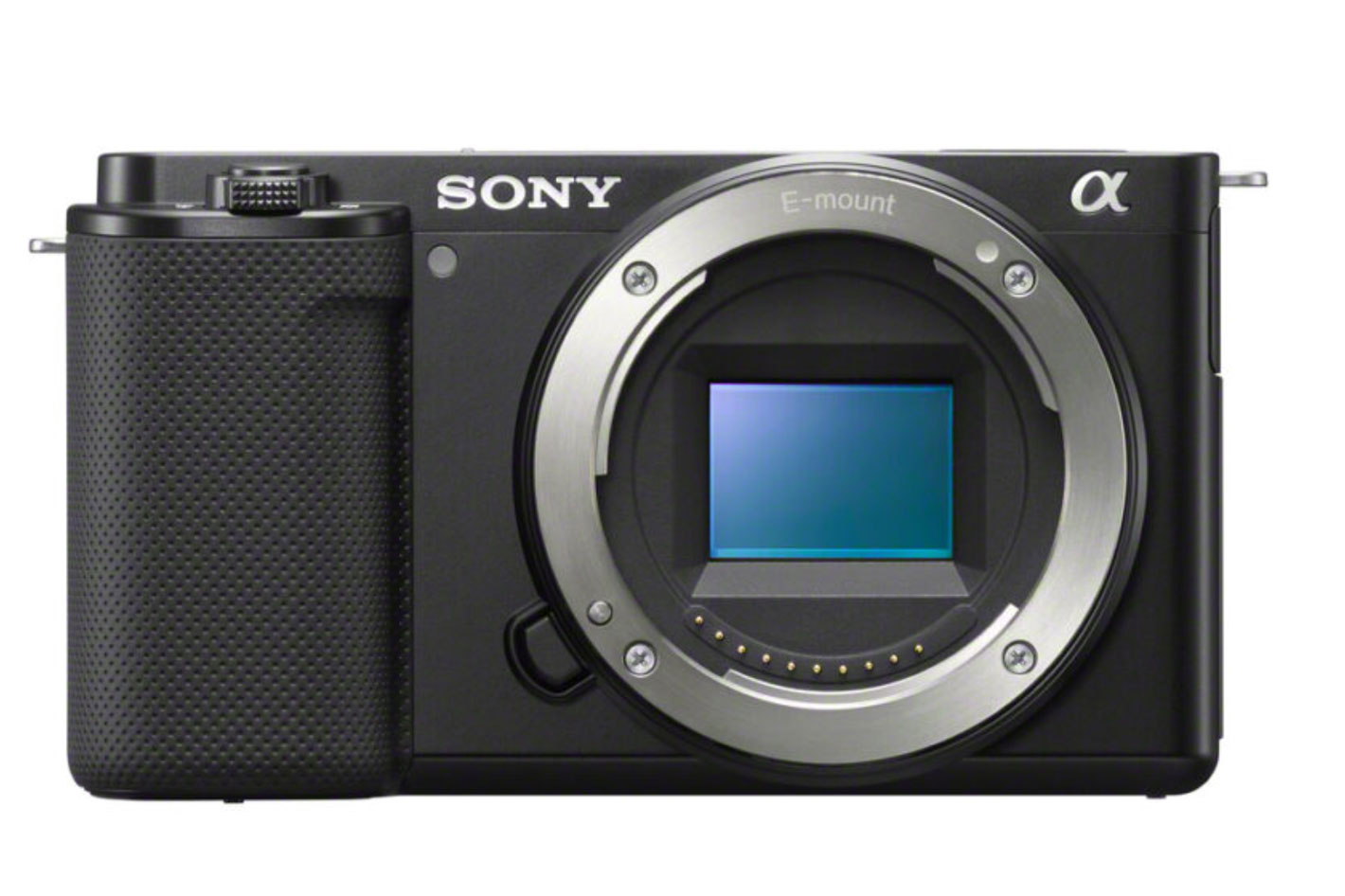 According to Sony, “users can comfortably operate the new ZV-E10 thanks to its easy-to-hold body grip and large MOVIE button that is conveniently located on top of the camera. When paired with the optional Shooting Grip with Wireless Remote Commander (GP-VPT2BT, sold separately), one-handed shooting is simplified with easy to access zoom, record and a customizable button. A recording lamp (tally light) is also provided on the front face of the body for an at-a-glance indication of recording status. A red frame on the LCD screen also appears while recording to quickly and easily lets the user know if recording is active when behind the camera.”

A unique feature of the ZV-E10 is the zoom lever that can operate optical zoom with power zoom lenses and Clear Image zoom with both zoom and prime lenses. Using Clear Image zoom, the user can zoom without losing video resolution to maintain full 4K video. The user can also choose from eight zoom speed settings for added creative flexibility.

The ZV-E10 features a video-first design in a lightweight form factor (approx. 12 oz. / 343g) and includes the popular side-opening Vari-angle LCD Screen that allows creators to connect external mics on top of the camera. This simplifies setup while still allowing users to see the screen in selfie shooting mode and from high and low angles. 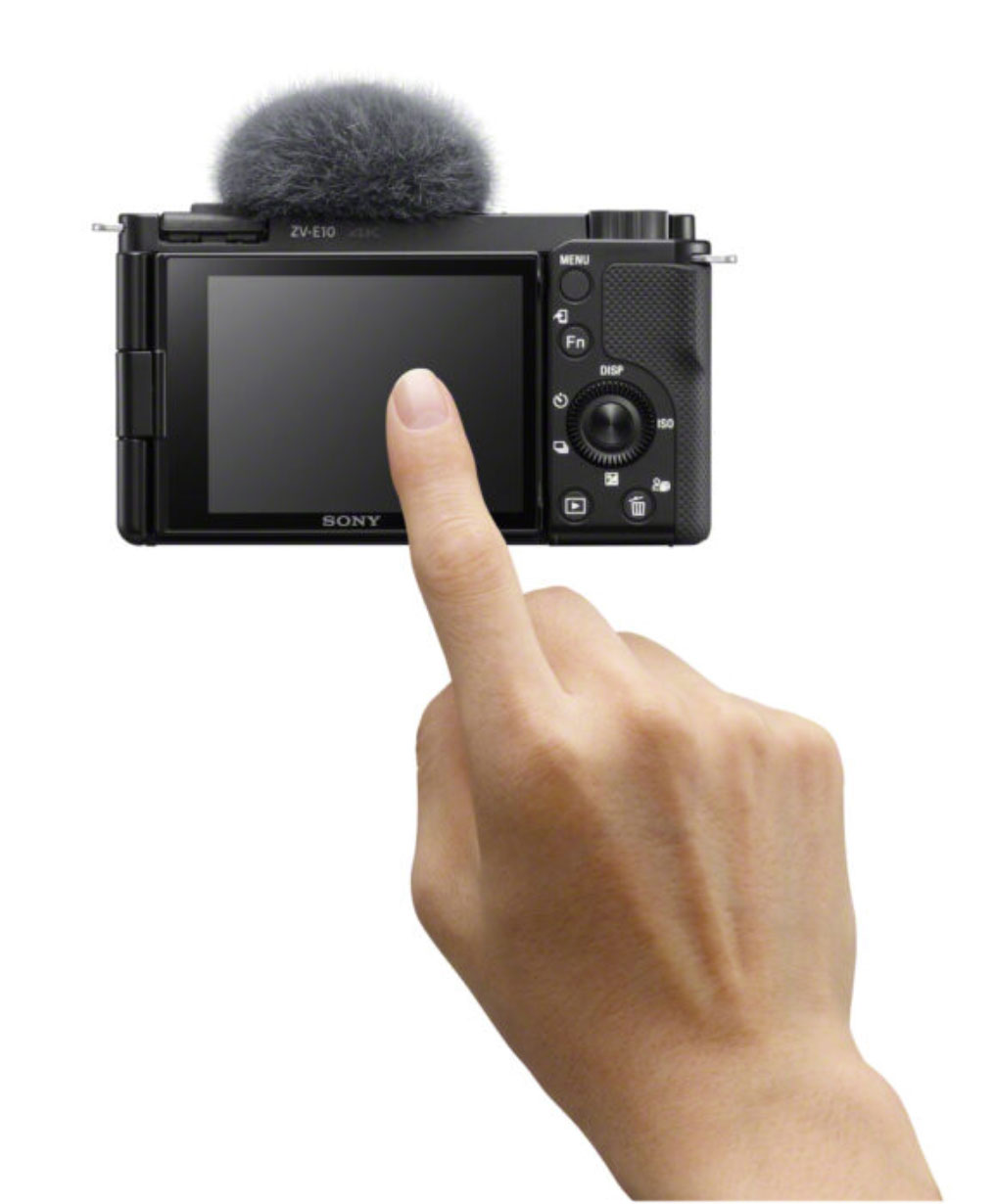 In addition to the screen, the ZV-E10 includes several other easy-to-use functions that are specifically designed for vlogging, including a new mode button located on the top of the camera that allows creators to easily change between Still/Movie/Slow and Quick modes with just one touch.

The ZV-E10 features long battery performance with enough power to capture up to 125 minutes or 440 images on a full charge so the user can record for long periods without worry.  When shooting indoors, AC power supplies like the optional AC-PW20AM can supply power, so the user can continue to record without worrying about battery consumption. Power can also be supplied through a USB Type-C connector, allowing external batteries to power the camera for extended battery life when shooting on the go. To conserve the camera’s battery, the ZV-E10’s Vari-angle LCD Screen allows the user to put the camera into Power save mode by closing it and instantly turn the camera on by opening the panel. 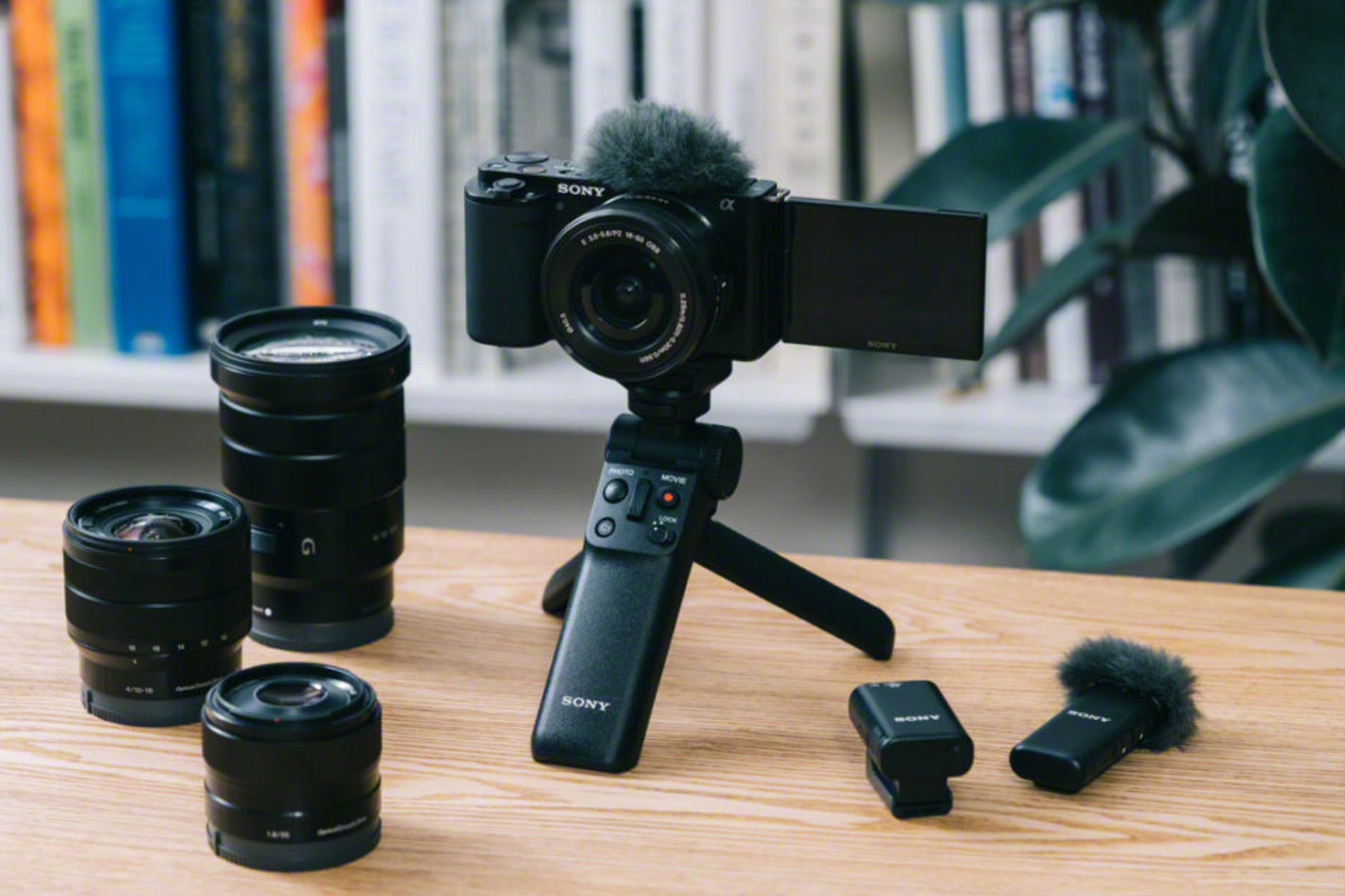 The ZV-E10 can also be used as a high-quality webcam or live streaming camera by simply connecting it to a PC or smartphonei for increased mobility while streaming with no additional software needed. The feature allows the user to take advantage of the ZV-E10’s outstanding image quality and crystal-clear audio as well Face Priority AE and Soft Skin Effect while livestreaming or on video calls. The ZV-E10 supports standards used for USB cameras like UVC (USB Video Class) / UAC (USB Audio Class). The ZV-E10 also allows users to connect to a power supply via USB cable while livestreaming for longer usage. For added convenience, the user can assign this function to a custom button to start streaming instantly.

The new ZV-E10 will be available in black and white in the end of August for approximately $700.00 USD and $900.00 CAD. It will be sold at a variety of Sony’s authorized dealers throughout North America.

A new kit featuring the ZV-E10 camera and E PZ 16-50mm F3.5-5.6 OSS power zoom lens will also be available in the end of August and will be sold for approximately $800.00 USD and $1,000.00 CAD. It will be sold at a variety of Sony’s authorized dealers throughout North America. 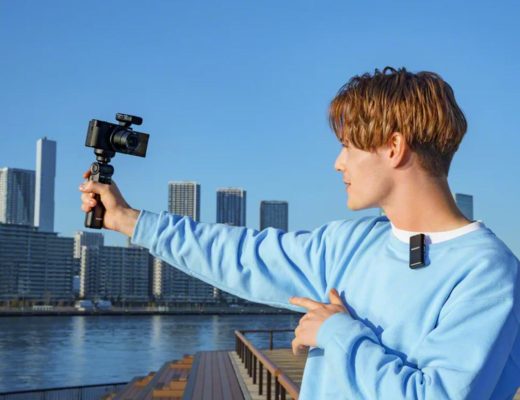 Announced as a solution for vloggers and video creators, the new ECM-W2BT Wireless Microphone, paired with the ECM-LV1, offers... 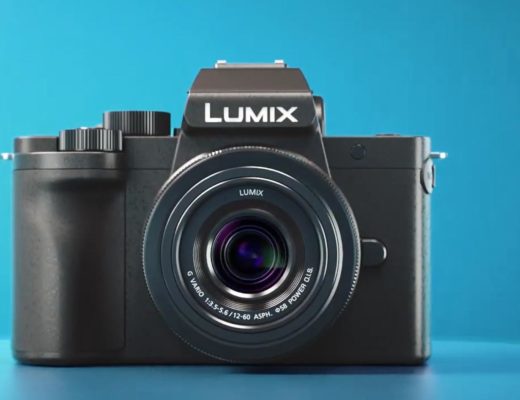 Announced as the “logical next step from your smartphone” the LUMIX G100 is the first MFT camera to offer...