Speed up and simplify content creation are two of the goals of the new three-dimensional zKey Keying System from zLense, presented at NAB 2017. 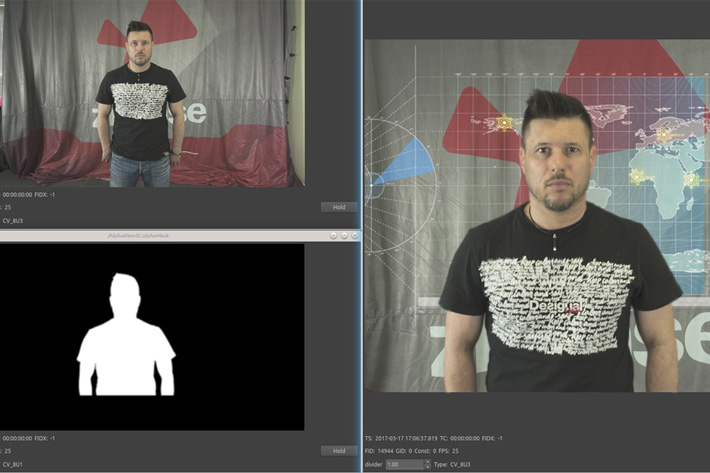 The zKey 3D Keying System allows to add CGI layers in front and behind the talent in real time, needs no special background or lighting and can be used in virtual and augmented reality applications.

Virtual Reality may never become has popular as many expected, but there is no lack of technology to move it forward. One such example is the zKey 3D Keying System from zLense, demonstrated at NAB 2017, which is a three-dimensional keying system that enables the creation of alpha channels or image masks without Chroma or luma keying, and without requiring special lighting.

Unlike traditional keying systems, zKey uses depth information to separate the foreground talent from the background, creating an alpha channel in real time without the need for green screens, special lighting or other limitations.

“With the introduction of the zKey 3D Keying System we are opening possibilities for maximizing creative flexibility in live broadcasting”, said Bruno György, CEO of zLense. “The zKey system allows for adding CGI layers in front of the talent, or between the foreground and background in real time – a process that has been impossible without the need for green screens until now. Because no special backgrounds or lighting are required, this capability can revolutionize the creative potential of live productions while also speeding up and simplifying content creation.”

The zKey enhances an existing studio camera with the system’s depth camera attachment. Both content streams (Full HD video and depth image) are transmitted to the zKey appliance that outputs the alpha channel and mask with a delay of only 4 frames. The zKey solution uses the depth image along the same optical as the video image to determine the silhouette of the talent, with the edges of this silhouette used to create an alpha channel of the foreground talent in real time. The system is ideal for a wide range of augmented reality (AR) applications.

The zKey also allows for panning and tilting on a tripod-mounted camera. The solution is designed to alleviate concerns about limiting foreground colors, shadows cast by talent on a green screen, green light being reflected from the background onto the talent and more.

Recognized with a Best of Show Award by NewBay Media’s TV Technology magazine at the 2017 NAB Show, the system is presented as a turnkey solution which provides everything necessary out of the box to use an existing studio camera in tandem with zLense’s range-finding camera.