The world's first 3-Axis smartphone hand-held stabilizer has arrived!  This is NOT just another Kickstarter campaign for a hopeful product – this is a real device designed and in production now from DSLRPros. 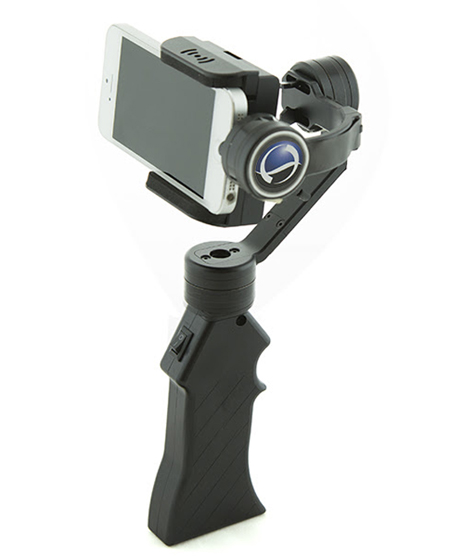 I just confirmed with DSLRPros that the 3-Axis Smartphone Stabilizer is currently in production and a test unit will be in my hands shortly so I can give a full review in a couple of weeks – stay tuned!

Here's the information provided in the press release:

The world's first 3-Axis smartphone hand-held stabilizer has arrived!  Film just like the pros with cinema quality stabilization right from your smartphone.  With sub-pixel stabilization on ALL 3-Axis (1st Axis:  Roll, 2nd Axis: Pitch and most critically 3rd Axis: Yaw) you will have the power to capture compelling, high production value footage that was previously impossible to shoot on a smartphone.

Run, jump, spin and shake all while taking perfectly stable video from your smartphone. The new DSLRPros hand stabilizer for your smartphone will turn any smartphone with a video camera into a movie quality recording device. With 3 brush-less motors and a self tuning stabilizer system this gimbal will automatically calibrate to most smartphones* you have. Just place your phone into the clip and power on.

*Note: Tested compatibility with all iphones and similar sized smartphones

DSLRPros also confirmed that they are going to be releasing a GoPro version of this 3-axis stabilizer for the GoPro soon as well.

Many more exciting products coming from these guys in the months to come! Don't think of DSLRPros as only a reseller/modifier of video-capable UAVs – these guys are all about making tools for the Indie filmmaker. I've seen behind the curtain folks… more great things coming soon!