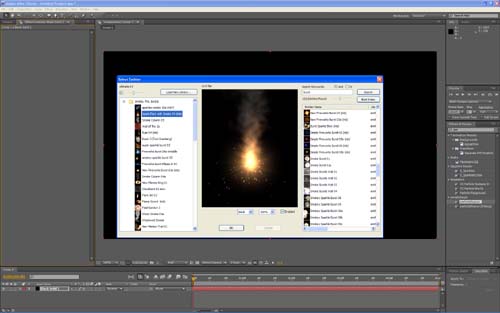 wondertouch by GenArts announced today the immediate availability of particleIllusion™ for After Effects (pIAE) for users of Adobe After Effects on Windows. Available as a plug-in for the first time, particleIllusion for After Effects enables artists to create gorgeous particle effects directly within After Effects, producing a more efficient workflow and significantly enhanced productivity. Like its stand-alone sibling particleIllusion 3.0, pIAE is built on the industry’s most robust 2D particle generation engine. As a result, it features the same highly acclaimed speed and ease of use that have made wondertouch products so popular with more than 10,000 compositing artists around the world. In addition, pIAE provides access to the thousands of existing wondertouch emitters — downloadable presets designed to allow users to effortlessly create natural, high-quality effects such as smoke, fire, explosions, sparkles, fireworks and countless abstract effects — without ever leaving the After Effects environment.

particleIllusion for After Effects features include :

Ø The same emitter search engine found in wondertouch particleView
Ø Access to all top-level particle parameters, including size, life, number, velocity, etc. to further customize the particles for each project
Ø OpenGL-accelerated rendering
Ø Full support for HD content
Ø The ability to load most of the more than 2,800 existing particleIllusion emitters in After Effects, including the popular “Pro Emitters”

“particleIllusion for After Effects is the particles solution we’ve been waiting for,” said Ernest Chan, Post Production CG Supervisor at Nickelodeon Animation Studios. “We are huge fans of the incredible ease of use and high-quality output that wondertouch products have delivered for years. Now, we get all those benefits in a more streamlined workflow that maximizes our creativity while minimizing our support costs. particleIllusion for After Effects is the right product at just the right time.”

“particleIllusion 3.0 as a standalone application has earned its reputation by allowing customers to create stunning, natural effects that they would never have the time or resources to accomplish with other tools,” said Alan Lorence, creator of particleIllusion. “particleIllusion for After Effects further enhances artists’ creativity by offering convenient, intuitive access to our amazing preset library without having to leave the After Effects environment.”

Todd Kumpf, 3D & Visual Effects Artist, demonstrates the power of particleIllusion for After Effects in his “Burst Generator” project. To watch the video visit: http://www.youtube.com/watch?v=cli92tshOC0

particleIllusion for After Effects is available immediately for Windows users, and will be available in Q1 2010 for Macintosh users. Visit www.wondertouch.com to order online or to find a reseller.
About wondertouch by GenArts
wondertouch by GenArts is an award-winning software developer specializing in particle effects for the visual effects industry. The company’s flagship product particleIllusion, a sprite-based particle effects application, is designed to provide the most comprehensive effects creation tool and efficient workflow. Considered one of the most popular solutions for effects creation, particleIllusion is now used worldwide by creative professionals working in film post-production and pre-visualization, standard and HD video, commercial broadcast, motion graphics and game content creation.