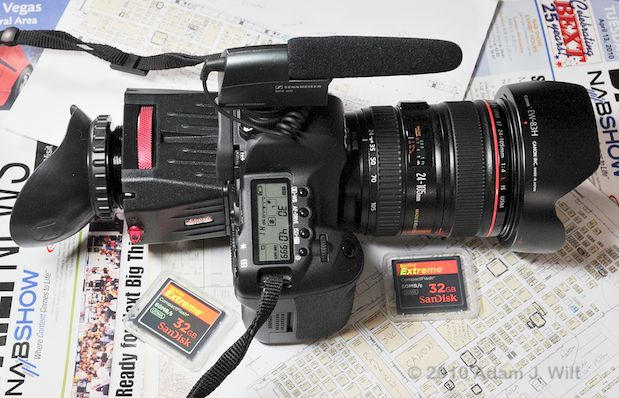 Here we are a week after NAB, and I find that I shot 177 stills and 27 minutes of video over two days on a Canon 5D MkII (it may not sound like a lot, but I grew up on pricey film, and I’m not one of those mash-the-button-down-and-hope-for-the-best photogs. Last year, I shot 237 stills over five days—and no video). Would I do it again?

Well, yes, actually, I would. In fact, I was pleasantly surprised at how well the 5D MkII worked as a run’n’gun / docco / ENG camera.

Mind you, my goal was to hit the ground running for an abbreviated two-day stay. I was working as a single-person crew and going between stills and video on a moment-by-moment basis. I wanted to maintain maximum mobility, maximum flexibility, and minimum weight, so I eschewed all thought of tripods, monopods, shoulder mounts, pistol grips, mike booms, wireless mikes, on-camera lights, Pelican cases full of prime lenses, matte boxes, follow-focuses, Magliners, taco carts, Fisher dollies, Technocranes, 1st ACs, PAs, location producers, etc. As a result, there’s more ambient sound in my audio and my moves aren’t Steadicam-smooth—but I wasn’t slowed down by my gear, and I was able to see as much as I saw. Every shoot involves tradeoffs, no?

As I had hoped, carrying a video-capable DSLR (or HDSLR as they are coming to be known) cut my on-shoulder weight down to the point of insignificance; the camera, its 24-105mm f/4 lens, and the mike and finder loupe totaled around five pounds, roughly the weight of an AG-HVX200 or a PMW-EX1, and only a pound more than the DX-format Nikon D300 DSLR and 17-55mm f/2.8 I would otherwise have taken.

Handling turned out to be better than I expected. After all, the thing handles like an SLR, a design refined over the past 60 years or so. The right side of the body has an extended grip, and, crucially, a slight bulge at the top right rear corner where the thumb rests, allowing the thumb to stabilize the body and keep it from tilting to the left. My left hand went under the camera, supporting it, with fingers operating zoom and focus rings (I had a Manfrotto quick-release plate affixed; it sticks forward an extra inch and serves as a handy foot to rest against the palm of my hand).

When viewing through the Zacuto Z-Finder attached to the LCD, the camera was 1.75 inches higher and 3.25 inches further out than its normal, optical-finder-level viewing position, but this turned out to be an insignificant difference ergonomically; the SLR-style form factor still worked very well for eye-level, stable shooting. I was able to tuck my elbows into my body for support and stabilization when shooting video, just as well as when I was shooting stills with the optical finder.

When I needed to fly the camera up over my head, or out sideways at arm’s length to a place I couldn’t step into, I was easily able to do so, while retaining a stable grip on the camera and while keeping hands on the controls. I had no monopod, shoulder stock, or handgrip to get in my way and slow me down; all I had to do to go from stills mode to video mode was snap on the Z-finder, spin the control wheel from C1 (program mode, for stills) to C2 or C3 (manual-exposure video-mode presets), and hit the Live View button, and I was good to go.

Overall? I’d say that shooting stable handheld ENG-style video with the 5D MkII was no more difficult (and possibly even easier) than shooting with any decent handheld HD camcorder. A shoulder-mount camcorder would have given me more stable results, but at a loss of some mobility—and at a cost in weight and bulk.

But that’s not to say there aren’t considerable compromises involved.

In video mode, the 5D MkII is essentially a manual-focus camera, so focusing aids are essential—and notable by their complete absence. There is nothing in the low-res LCD to help one out: no distance scale, no peaking or EVF DETAIL, no expanded focus while actually recording, no false-color outlining, no focus-goodness bar or histogram. Those who shoot with first-generation AG-DVX100s will know what I mean. The best approach is to get a high-magnification loupe (which is why I chose the 3x-mag Z-Finder), and peer closely at the individual pixels on the 480p LCD screen, looking for those tiny twinkles of aliasing on downsampled detail that are the sole indicator of proper focus.

Eye-level viewing works well, but aside from that I was flying blind: when I needed to crane overhead or boom out sideways, I was aiming by guess. Unlike any modern video camera, the rear-panel LCD is fixed in place, incapable of tilting or swiveling to accommodate a different viewing angle. Yes, I could pop off the Z-Finder and view the LCD from a distance, but I could just forget about focusing if I did so.

The 5D MkII is also, essentially, a fixed-iris camera while shooting video. Changing the aperture, whether automatically in Program or Tv modes or manually in Manual or Av modes, causes the video to stutter, repeating three frames or so at the time the change occurs (you can see this when Steve Weiss is being interviewed, when I accidentally bumped the iris wheel during my overhead craning). If I needed exposure changes during a shot, I left the camera in auto-ISO mode. No worries there; even at ISO 3200 (think of an EX1 or EX3 in 1080p mode at +18db) the images are clean enough that the added gain isn’t apparent.

As far as exposure metering goes, you have a histogram available in Live View… until you start shooting, at which point it disappears. Audio metering? All you have to do is select Menu > 2nd wrench menu > Live View / Movie func. set. > Sound Recording, and you can see a two-channel level meter. But when you’re shooting? You’re SOL (simply outta luck). In several instances I shot MOS because I had turned off the mike and didn’t have any indication I had done so… have I mentioned the minor detail that there’s no way at all to monitor camera audio while shooting, and no headphone jack even for playback?

(Yes, Magic Lantern firmware fixes or works around some of these limitations, but ML doesn’t yet support the current build of the 5D firmware, and I wasn’t ready to roll back to a 30p-only version and load unsupported code a week before a show.)

In short, then, I consider the experiment a success. I was able to shoot photos and video with an HDSLR with no serious compromises to quality in either medium. The stills are, well, Canon 5D stills—no worries there—while the video is as stable and as well-exposed as I’d expect from a Handycam under the same shooting conditions. Yes, the focus was a bit of a challenge, but I managed to hit and track focus better than I expected—and the shallow depth of field came in handy for separating visually complex subjects from equally complex backgrounds. See for yourself: 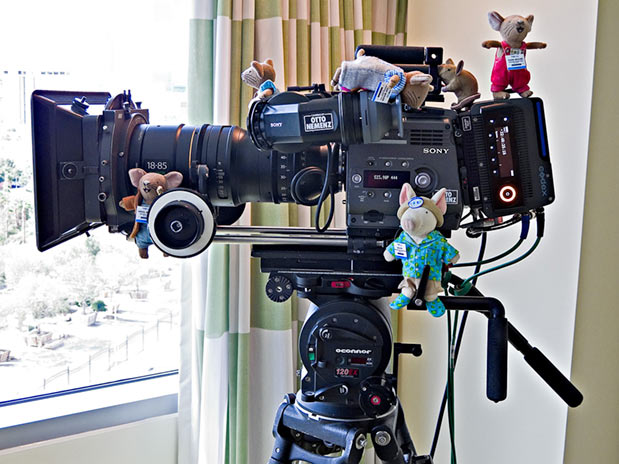 Now, this is a camera crew! (Sony F35 with Codex Onboard recorder, courtesy of and © 2010 Don Craig)

No material connection exists between myself and the National Association of Broadcasters or the various exhibitors I reported on; aside from the press pass, NAB has not influenced me with any compensation to encourage favorable coverage.

I’m on the advisory board of the Digital Cinema Society, hence the shameless link to their videos. What do I get in return for the link? Bupkis, that’s what I get; they ain’t payin’ me squat.

In Final Thoughts, I linked to an article by Stefan Sargent. Stefan bought me breakfast at NAB Tuesday morning. That isn’t why I linked his article, I linked because it’s a good writeup, and I would have done so had he not bought me breakfast. I’ve updated the disclaimer in that article to indicate this material connection; sorry, it was an inadvertent omission.

I bought the 5D Mk II secondhand from a chap on craigslist; the mike and CF cards from Amazon, and the Z-finder from B&H Photo. I spent my own money, and nobody gave me any special discounts (well, the nice chap who sold me the 5D threw in his spare battery for no extra cost when I also bought his 50mm f/1.4 lens). No material connection exists between me and any of the vendors/manufacturers mentioned.